This part of Laos is so beautiful! The first 30min of our from Vang Vieng, the landscape was particularly idyllic. Rice paddies, many lush, green hills with almost vertical slopes were en exceptional combination. Some parts of the road were destroyed by a land slide from the hill. Many big rocks were laying in the middle of the road and some crushed tracks on the side. We safely arrived in Luang Prabang, found our hostel and spend rest of the day resting, eating and walking around the town, particularly admiring both the Nam Khan and Mekong River in the late afternoon sun :) 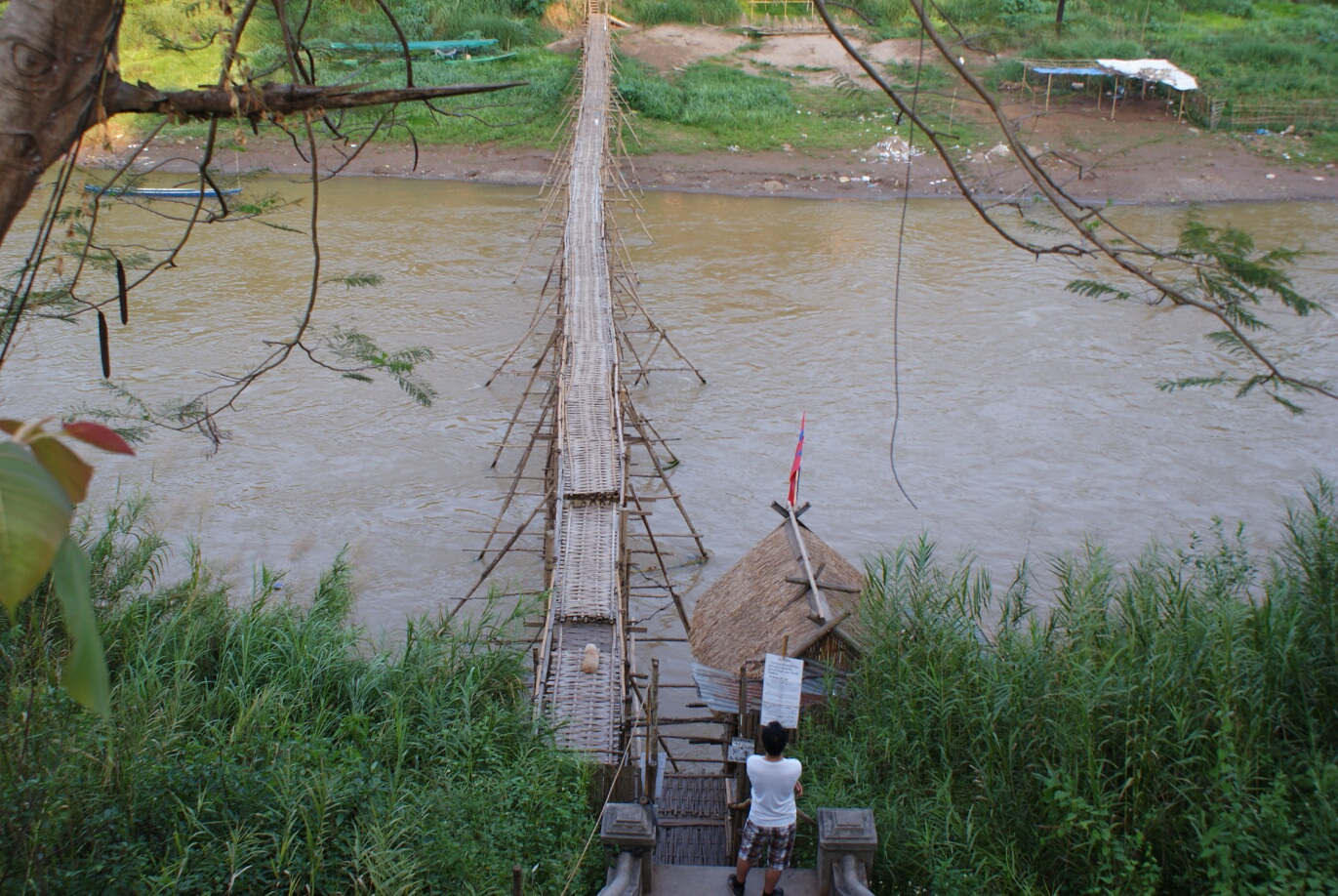 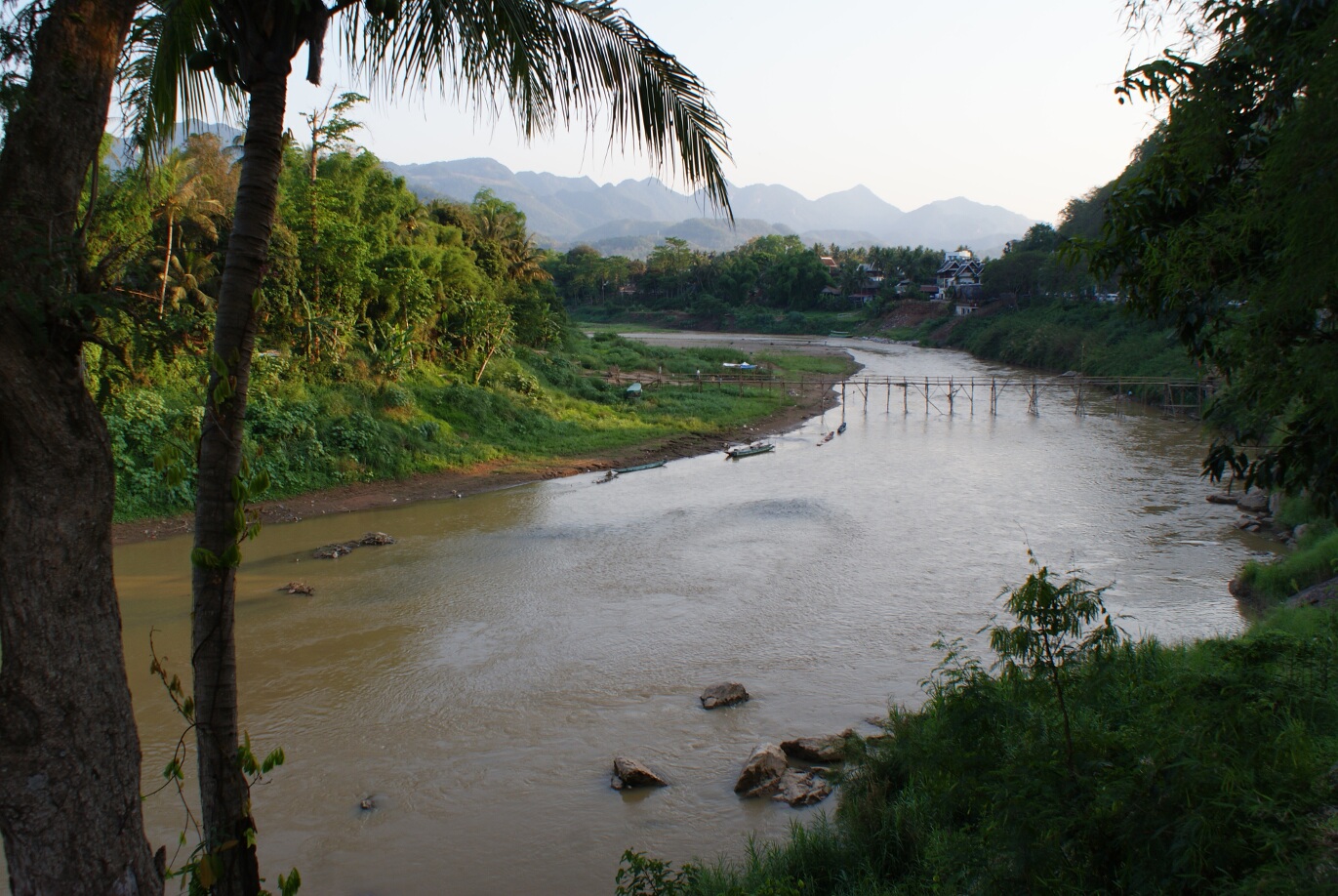 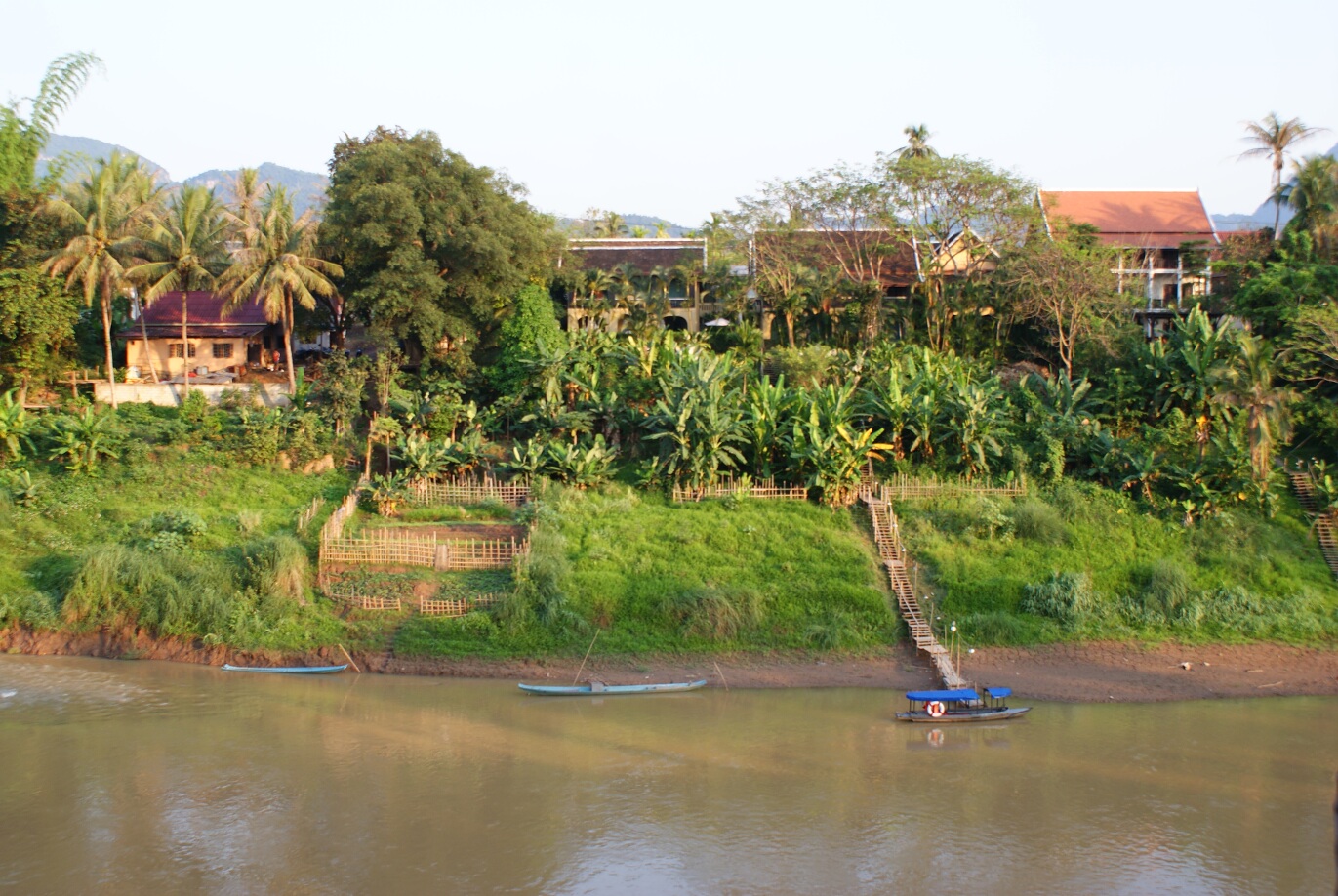 The next day started with the visit to Kuang Si Waterfalls located around 30km outside the town. There are minivans for 50k KIP however then your time at the waterfalls is limited to about 2h which isn’t enough if you want to walk up to the top of the waterfall and swim inside. After long negotiations with a tuktuk driver, he agreed to take us there for 160k KIP and wait 3h for us. First he grabbed some lunch for himself from the nearby stand and then we were ready to start a very uncomfortable and stressful ride to the waterfalls :) Crazy drivers, potholes and hard seats made this bumpy ride very painful for our backs. We noticed that some people were cycling there (and walking uphills with their bikes) but that’s really crazy idea on this narrow zigzag streets with heavy traffic and in full sun. We rented bikes many times and they always were in a rather poor condition, while they were usually fine on flat areas, uphills parts were always very problematic.

As we entered the Kuang Si waterfalls, the first thing we noticed were black asian bears. We were now in the Bear Rescue Center which is the part of the park. The bears had many obstacles and toys to play but they were all sleeping or lying in the water so we didn’t stop there for long and immediately moved forward in search of beautiful nature :) In was just 10am but it was already pretty crowded. In a moment we noticed first cascades and followed them to the top of the cascades where people gather to see the biggest waterfall. 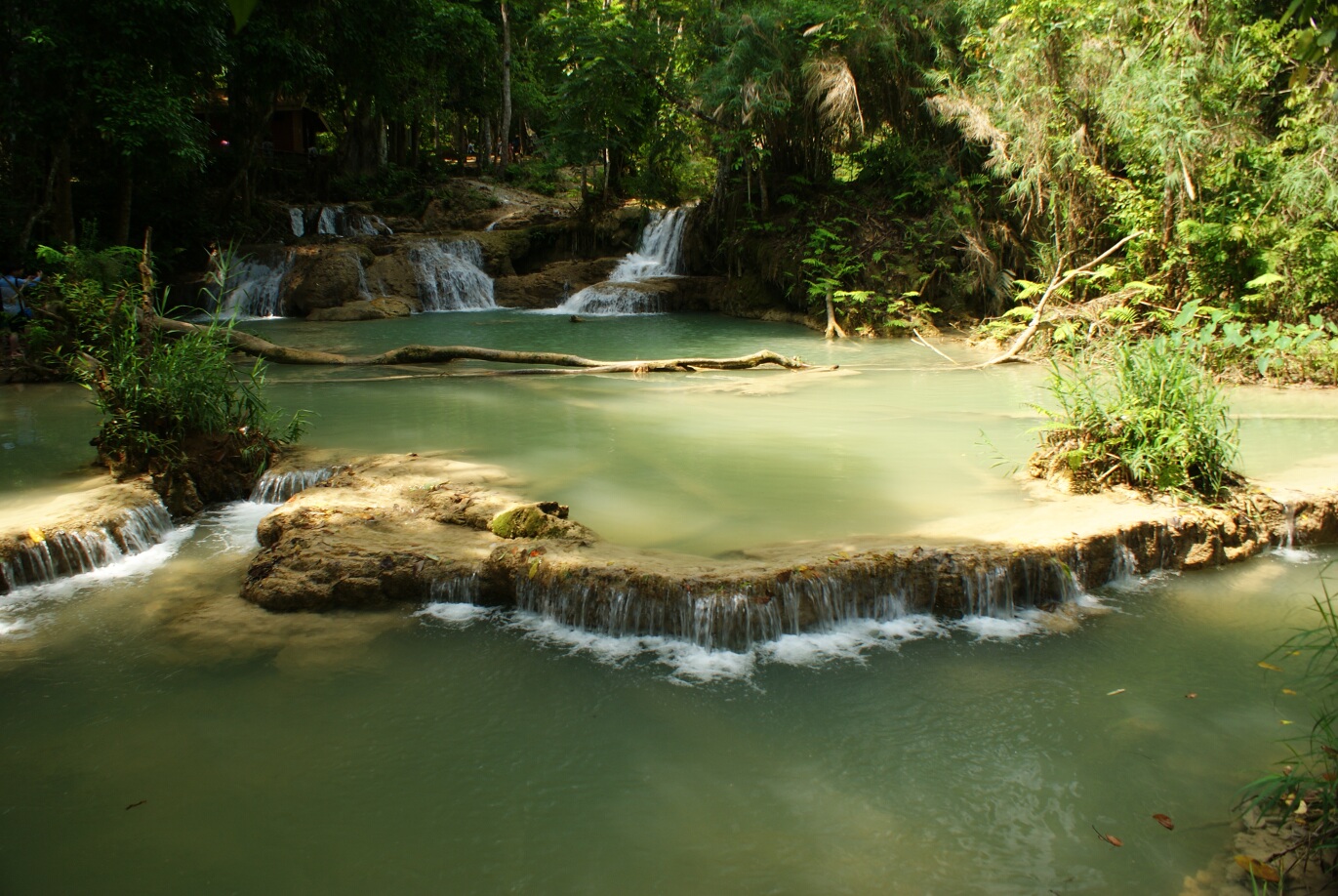 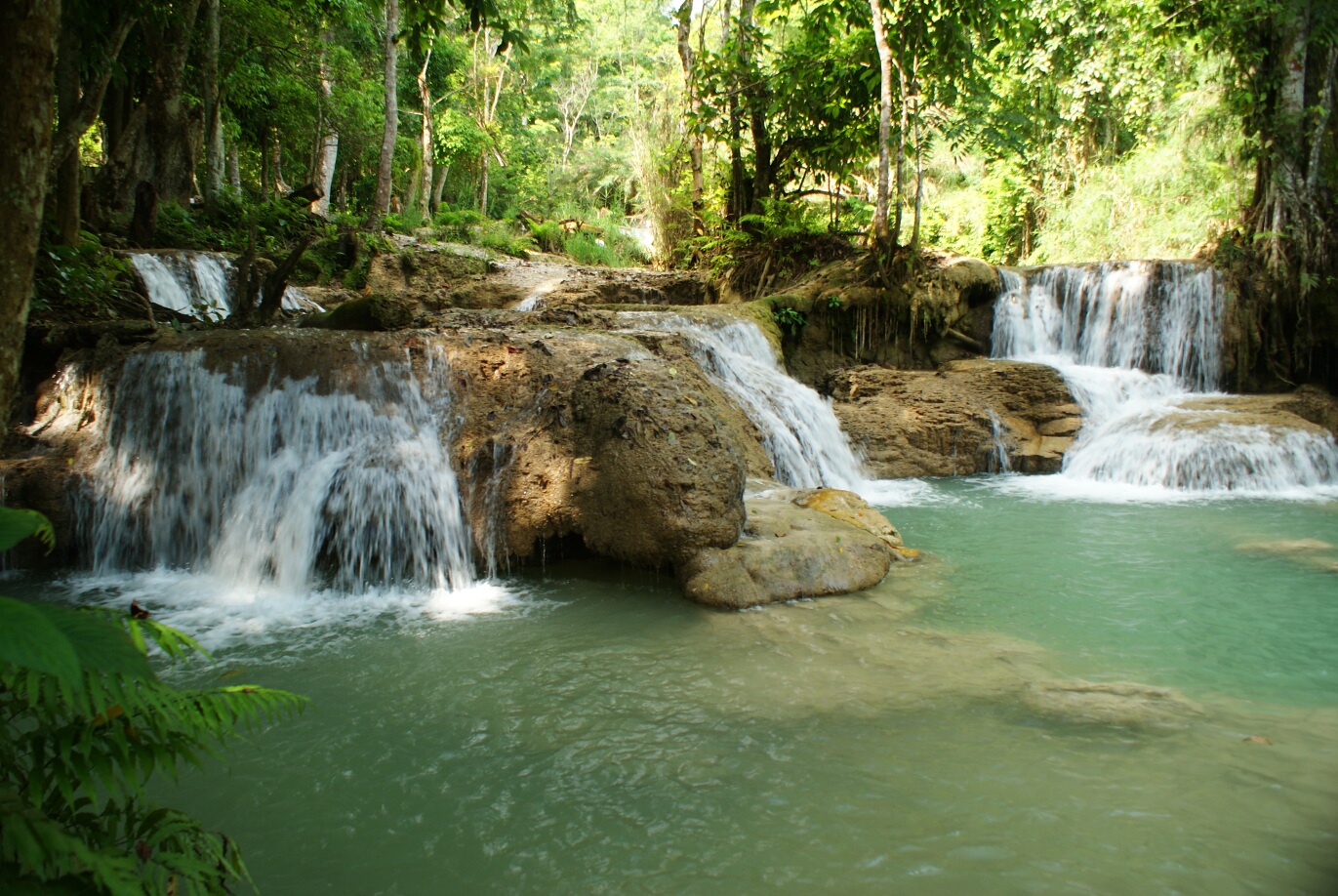 On the bridge visible below, people take pictures of the highest waterfall in the park which you can see on the next photo. All cascades are really beautiful, the color of the water contrasts nicely with the light color of the rocks. 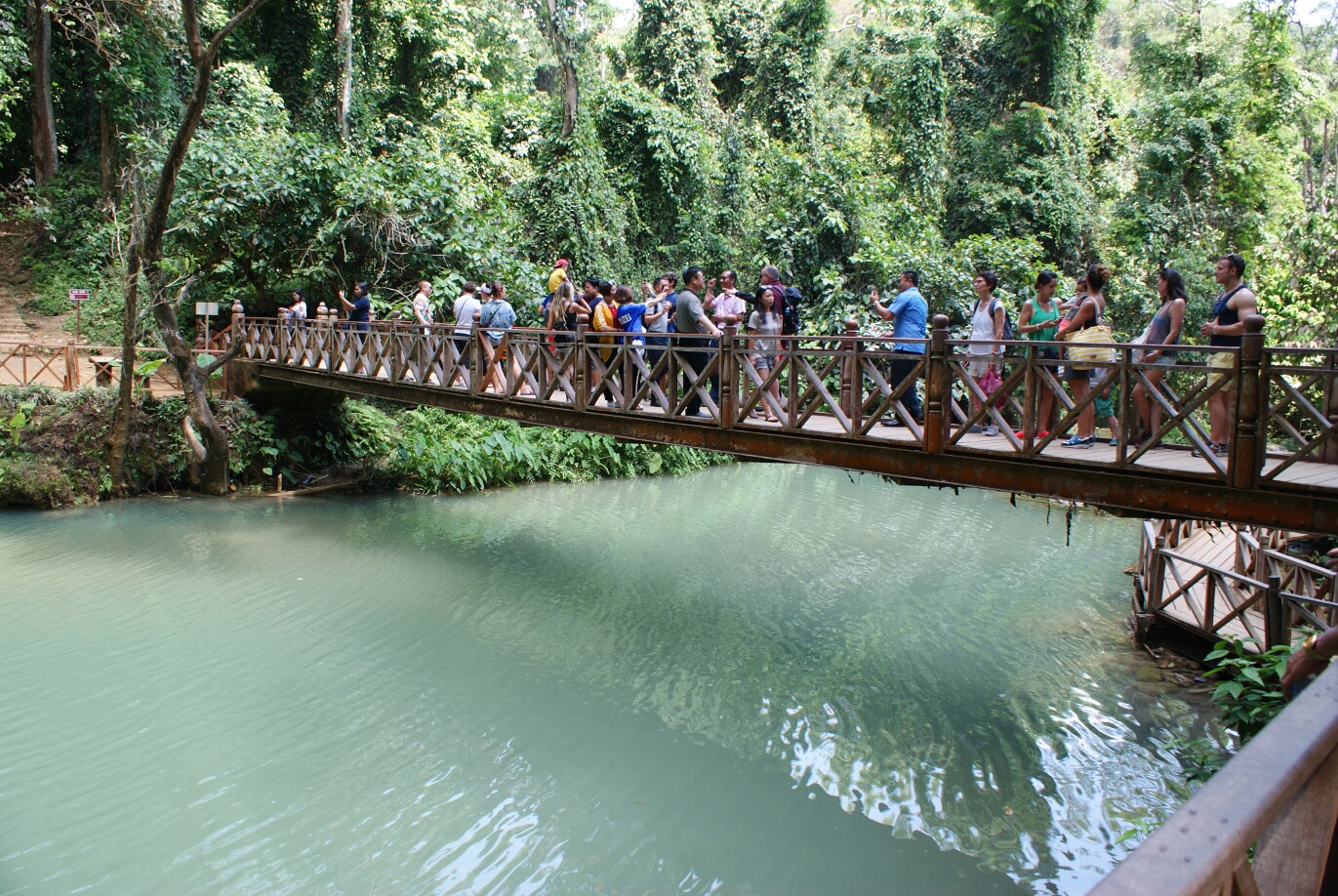 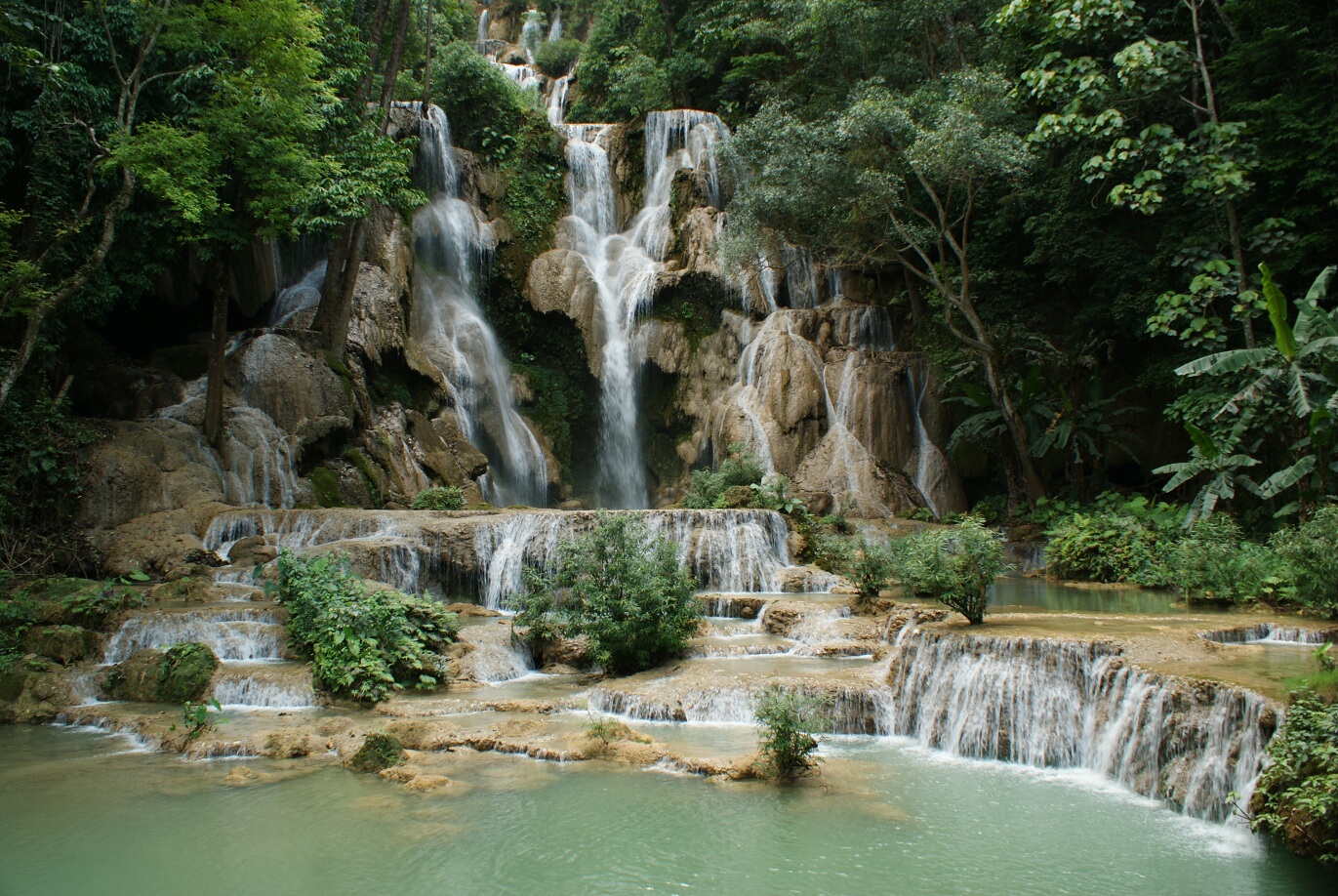 Next, we decided to walk to the top of the waterfall, hoping for an even better view of the area. The water was running down the stairs and again our waterproof hiking sandals saved us! The final part of the path leading uphill is steep and narrow but it was easy to get there. Unfortunately the views were not better here, we could see the distant mountains but trees covered most of it. There is a wooden catwalk to cross the water which is the source of the waterfall. 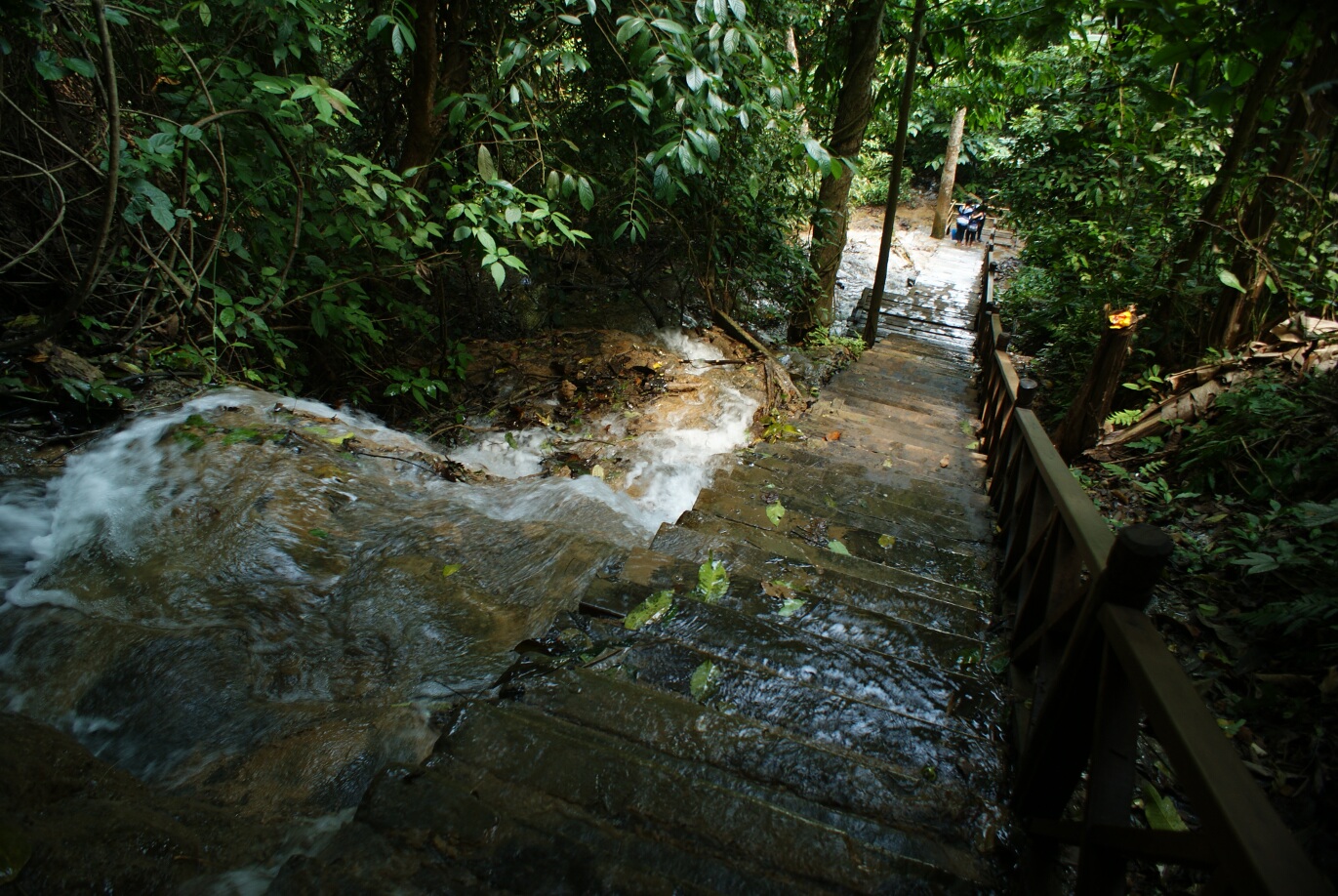 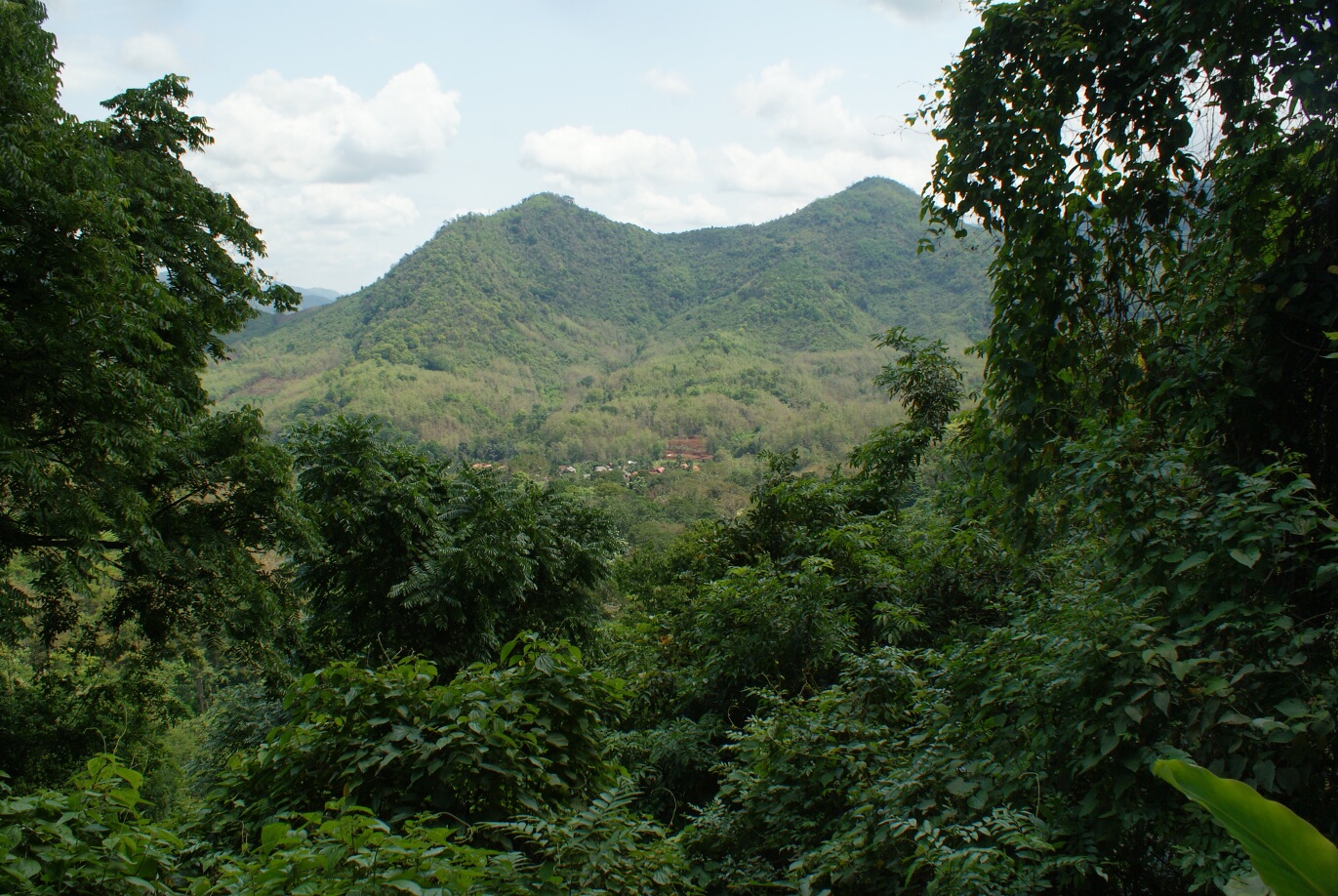 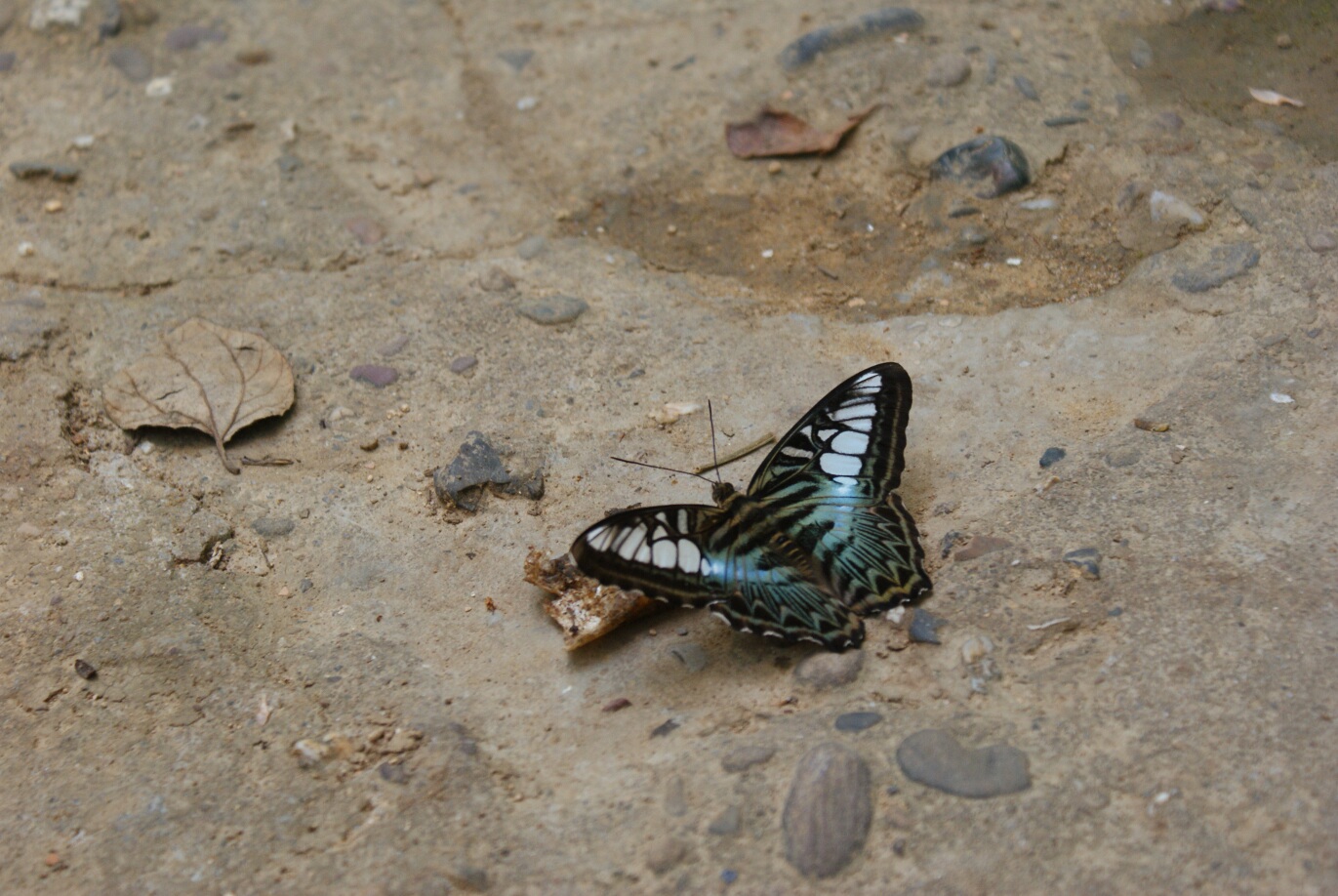 Time to cool down! We quickly jumped into one of the designated swimming areas :) The water was really refreshing! We noticed that it got more and more crowded inside the park and it was almost time for us to head back to the parking and find our driver. Back in town we had lunch and spent the afternoon exploring Mt. Phousi until sunset which should be particularly beautiful there. First we had to climb many, many stairs to reach the temple on the top of the hill. The panoramic view of the city, the rivers and the mountains surrounding this town was really spectacular. 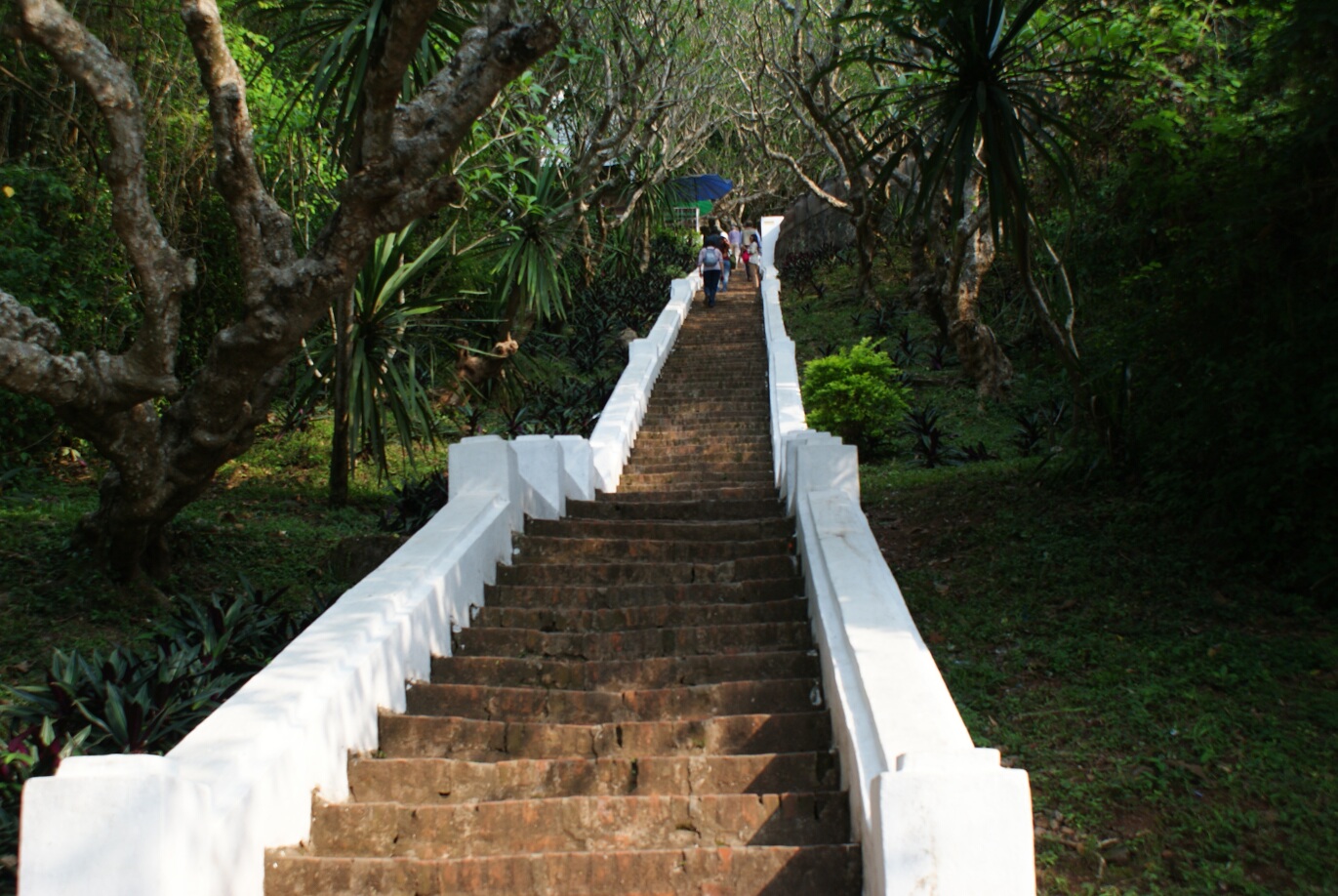 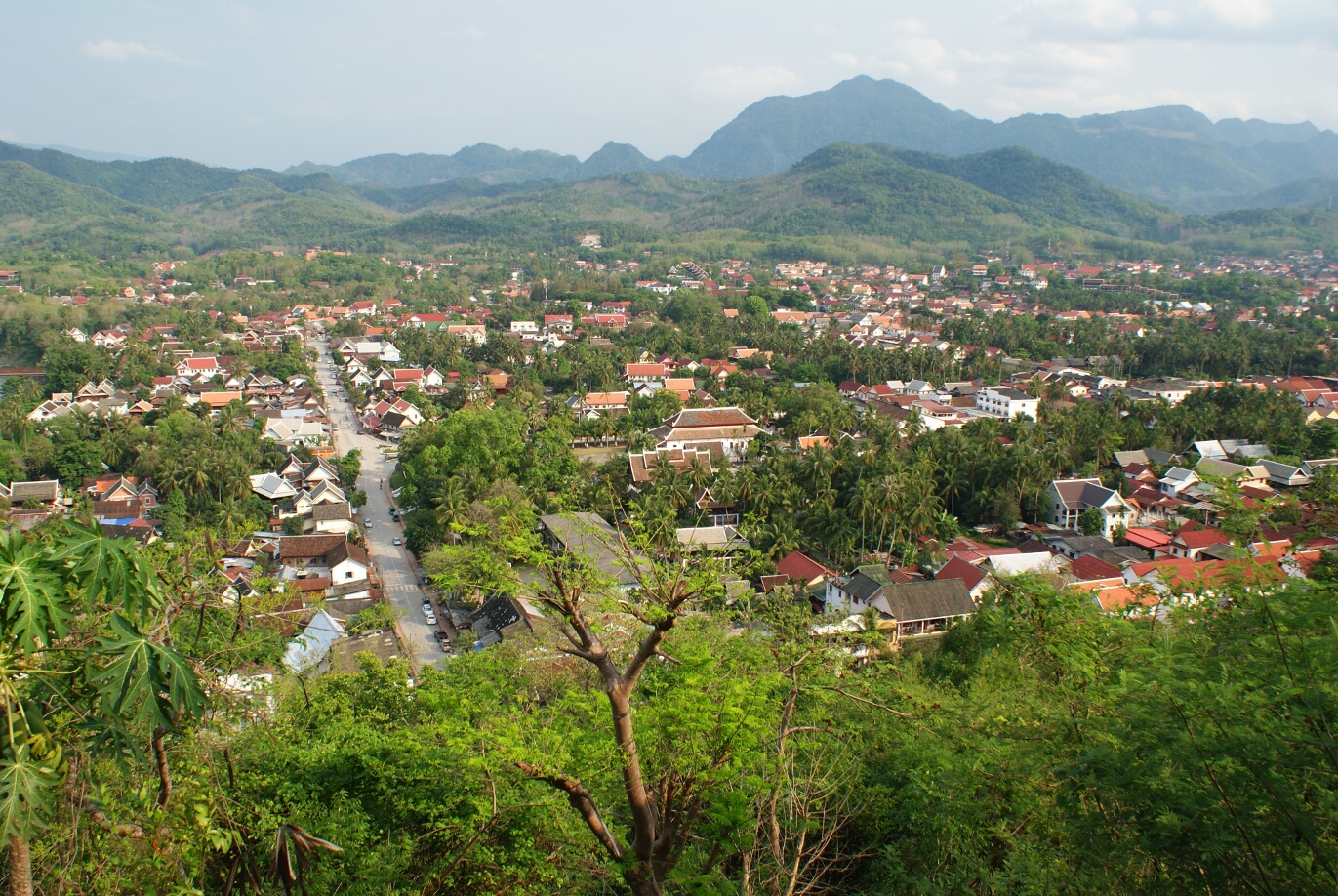 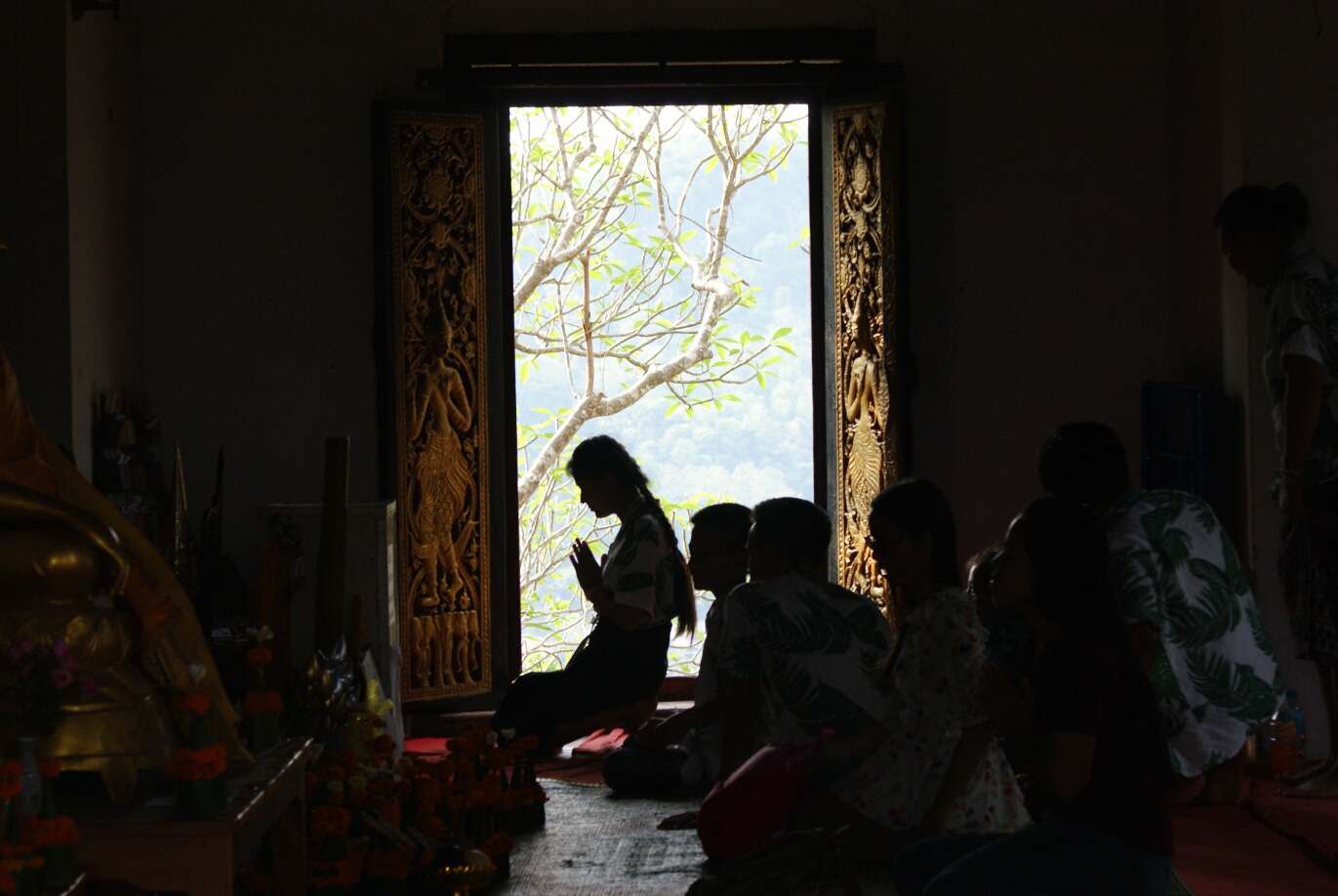 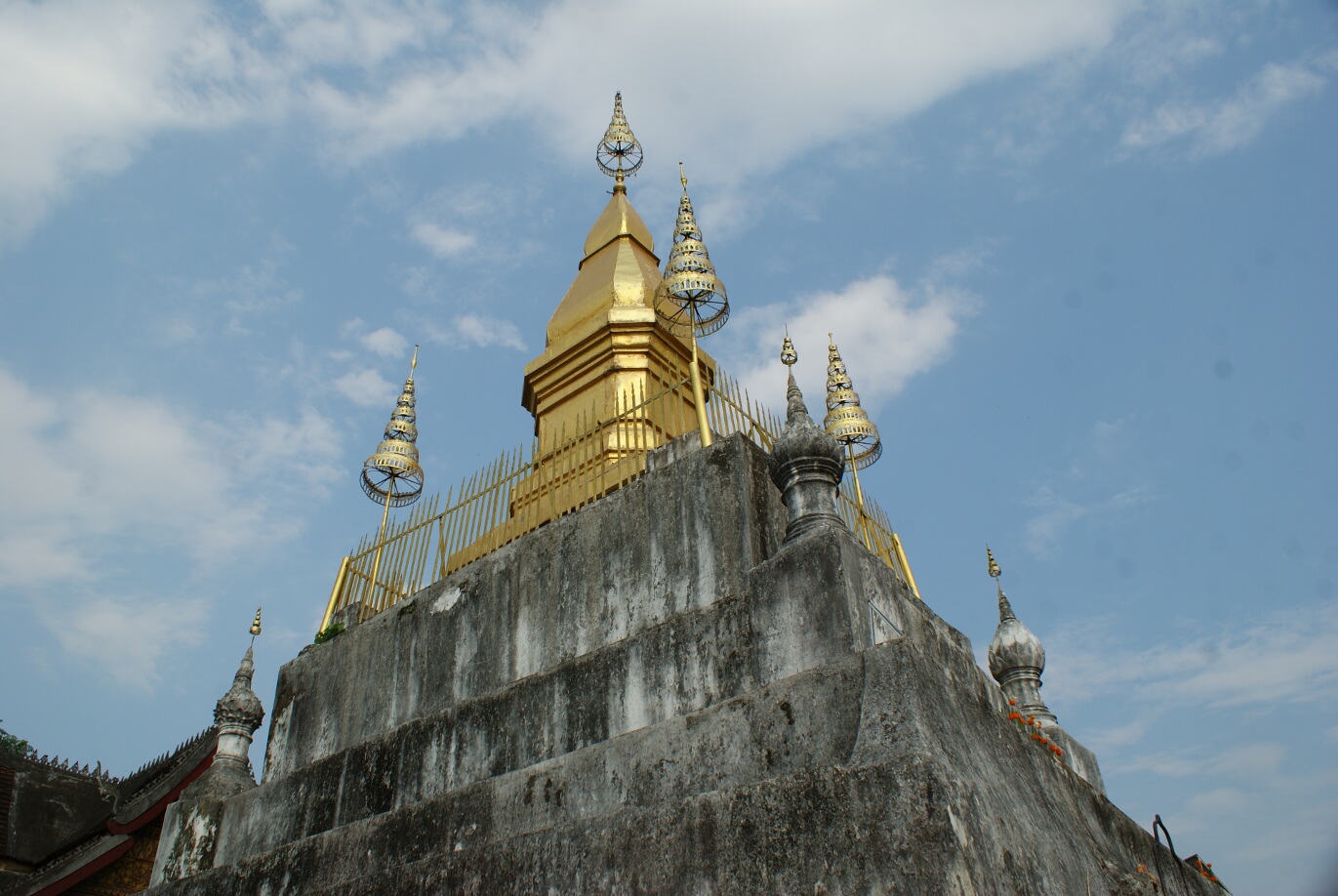 Besides the temple on the top, we passed few shiny and golden sculptures of Buddha and monks. There is not much place to sit on the top and it was true that this place attracts crowds but I’m not surprised since the colors of the river change spectacularly in the sunset! I was glad that we decided to try and get there quite early so we had time to enjoy the views for longer without it being crowded. As we got back down after the sunset, the night market was ready to welcome tourists. We bought some pancakes with mango and sweet condensed milk and nice wooden magnets for my grandmothers’ collections :) The items you can buy on the night markets are pretty much the same in every city, however there is always something more specific for the region, here kitchen aprons were the most original. Remember to bargain, most of the time I ended up around the half of the original price, depends how many items you want to buy. 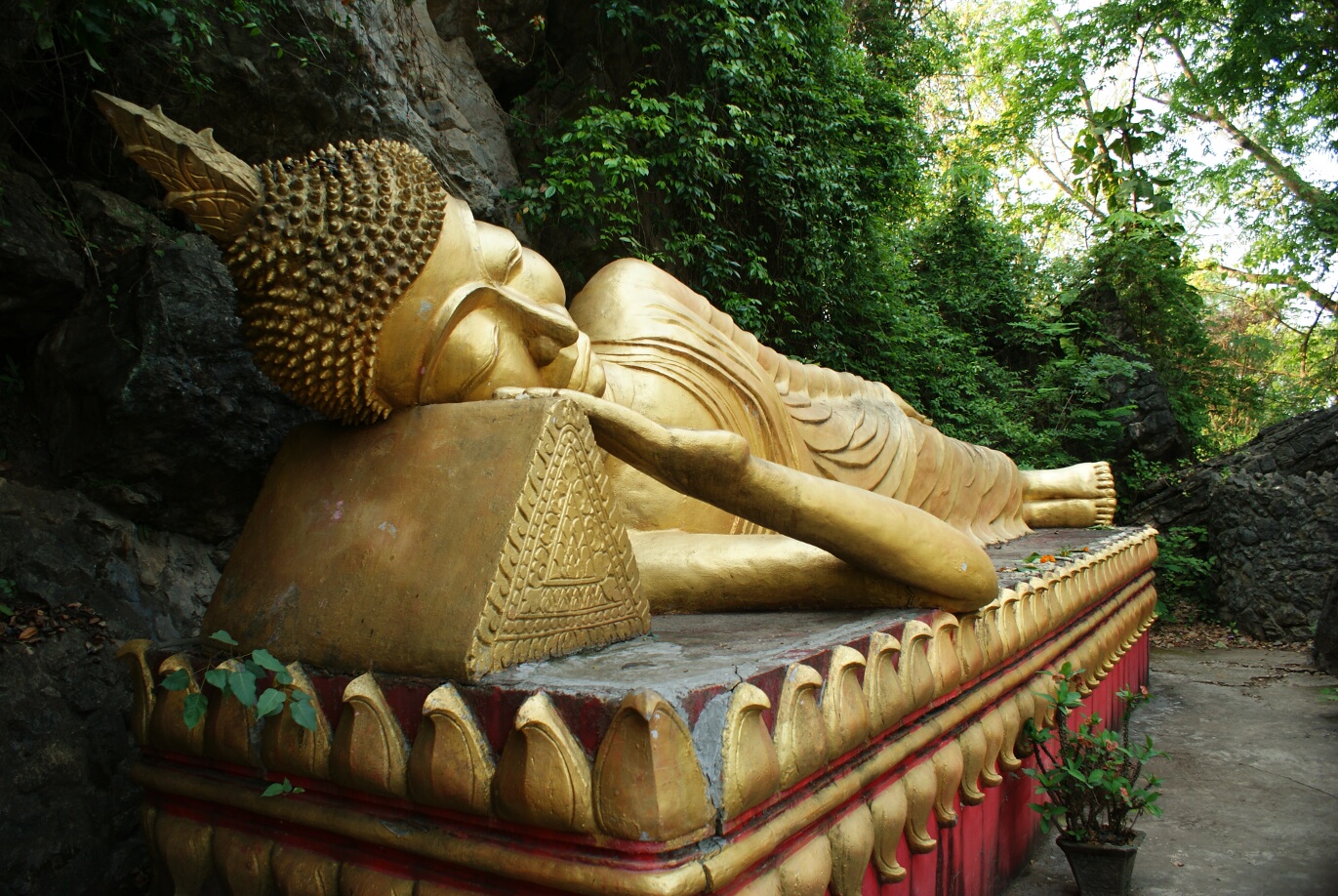 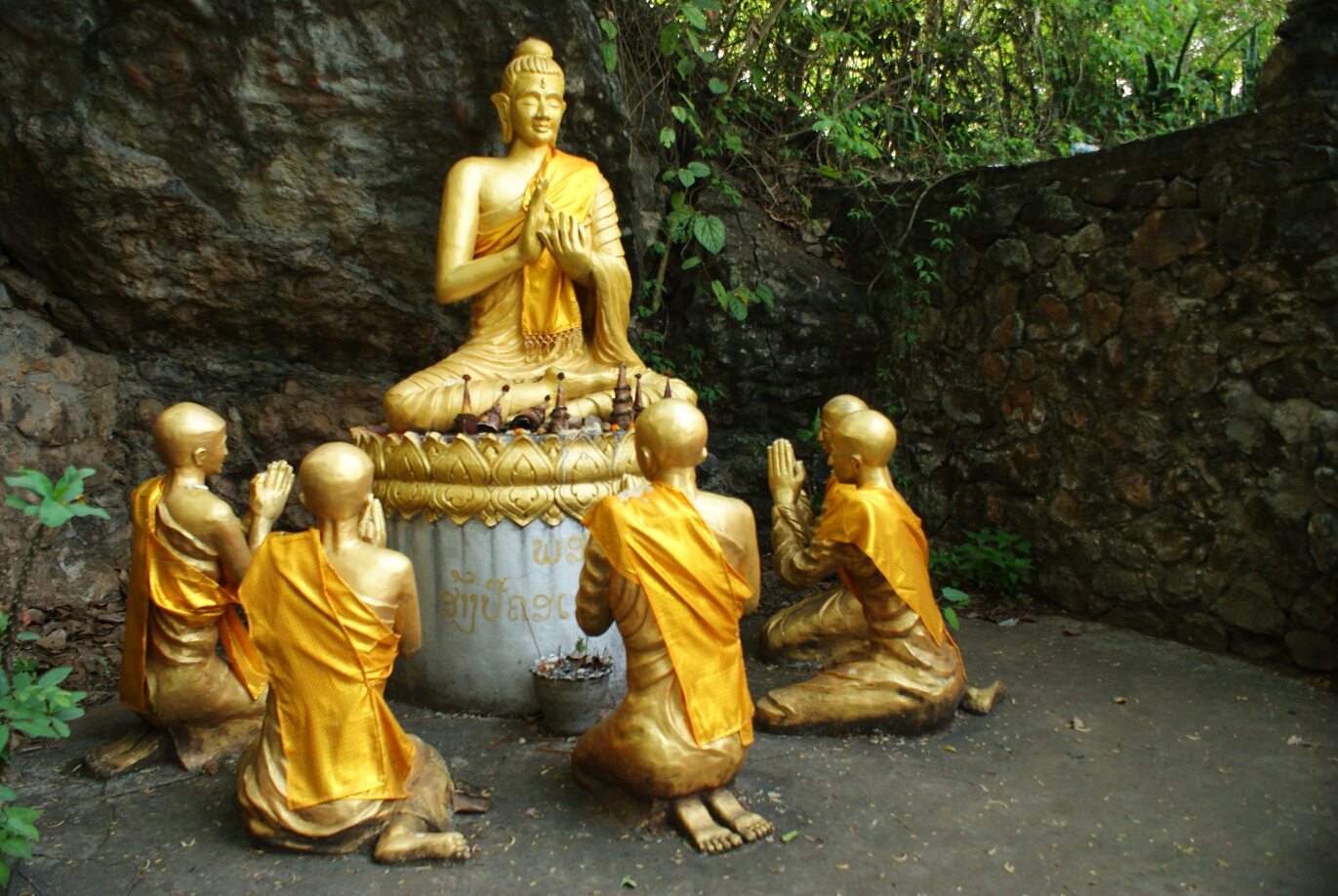 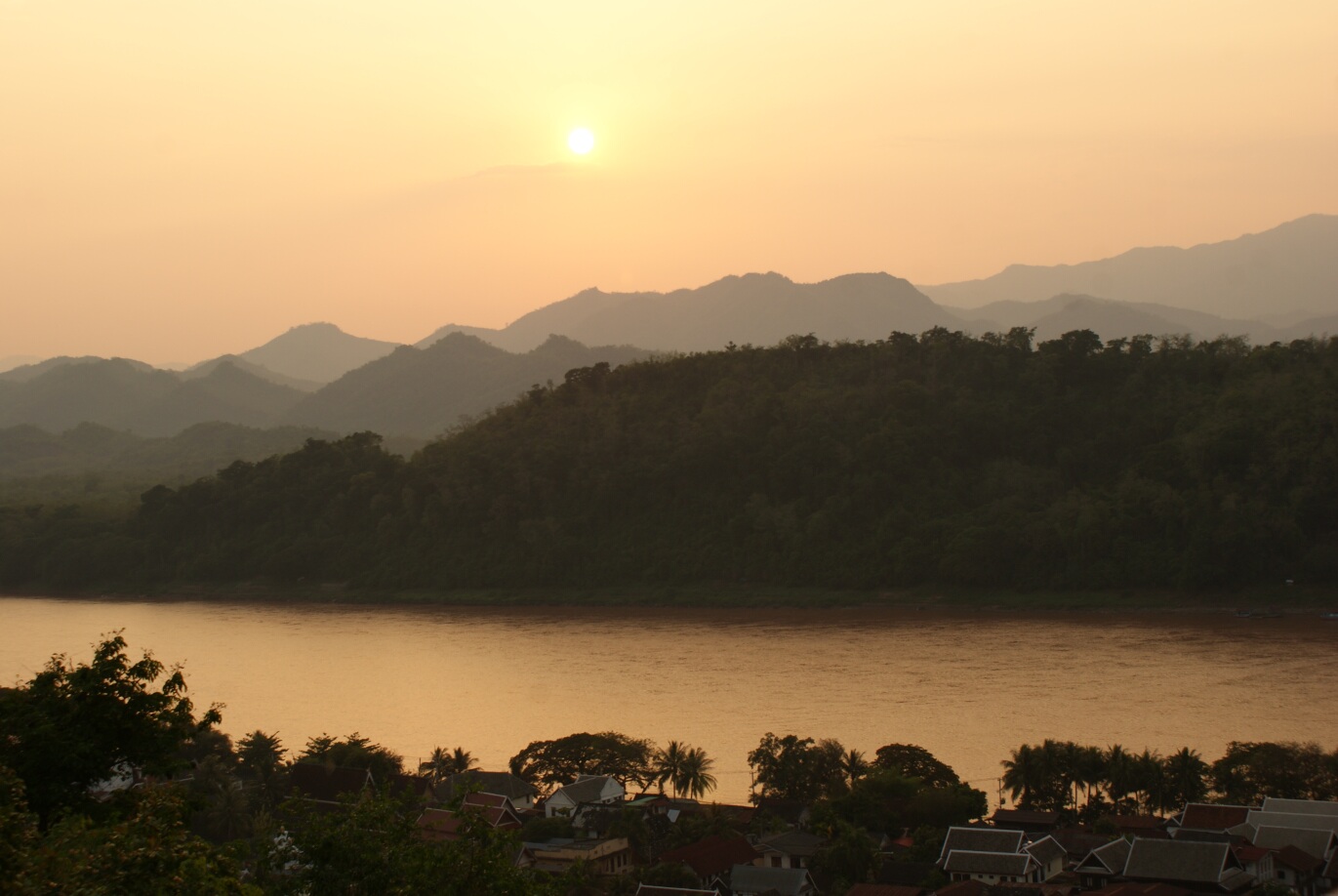 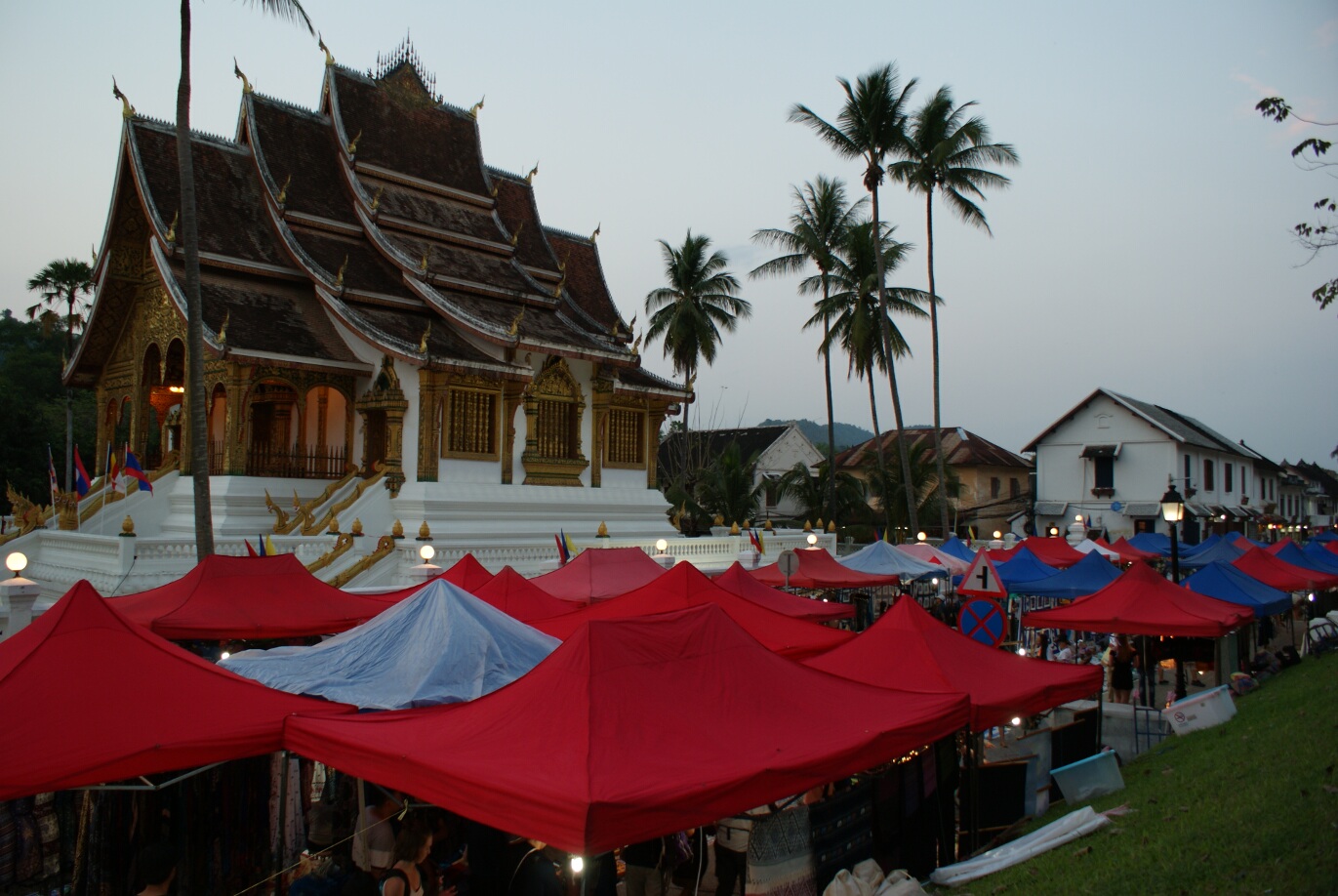 We have already seen many temples in Vientiane but we couldn’t just skip those in Luang Prabang. Though after checking out a few of them we both agreed that the style of them is similar but I still enjoyed to walk around them and observe the people. We noticed that believers pour water over the Buddah statue inside the temple and then this water is collected as holy water. Every time you want to enter any temple, you need to leave your shoes outside and this time someone took Sebastian’s sandals by accident (the same model, color and almost the same size!) but luckily I quickly ran through the crowd on the nearby street and spotted a fellow tourist with his shoes so this story had a happy ending :) 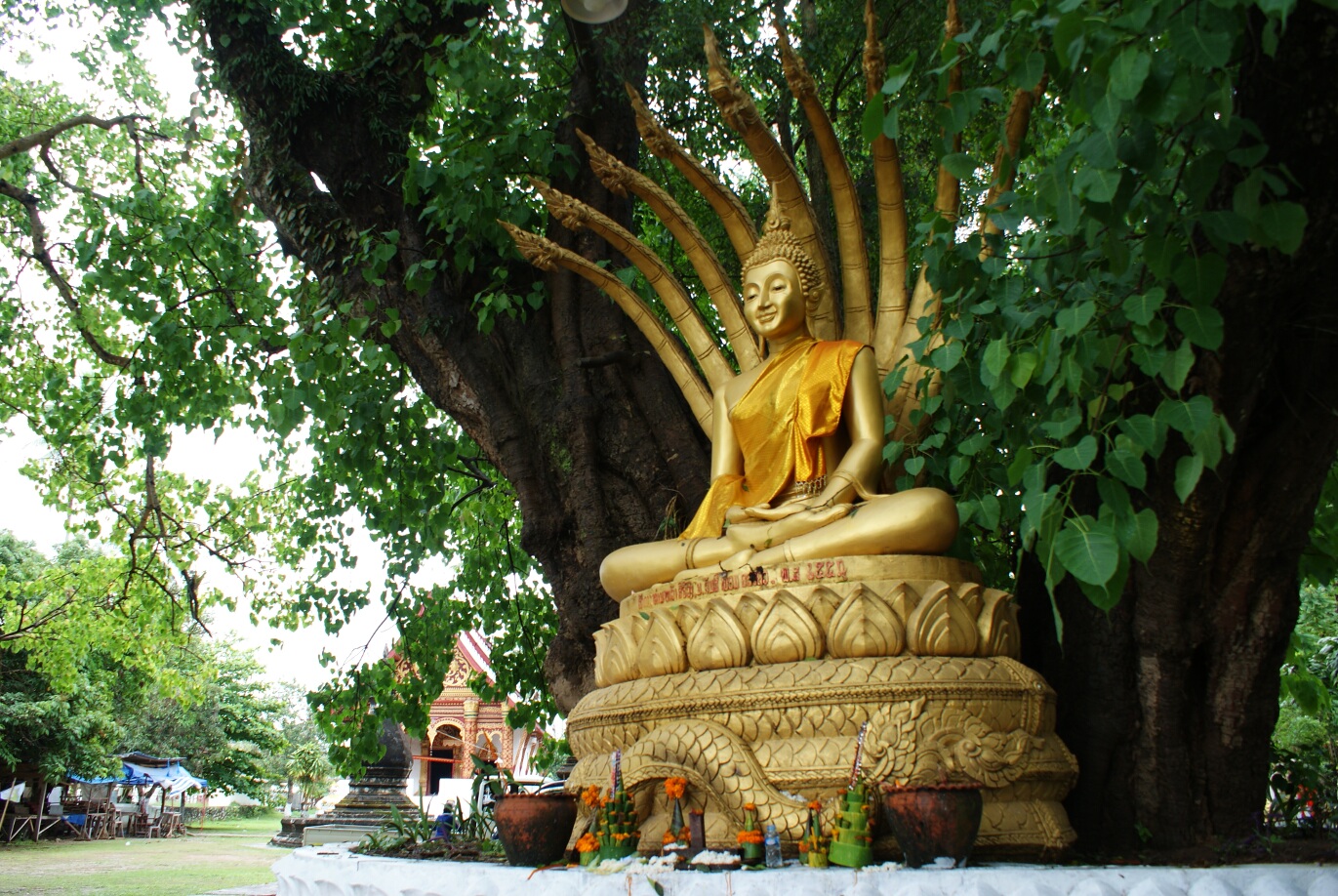 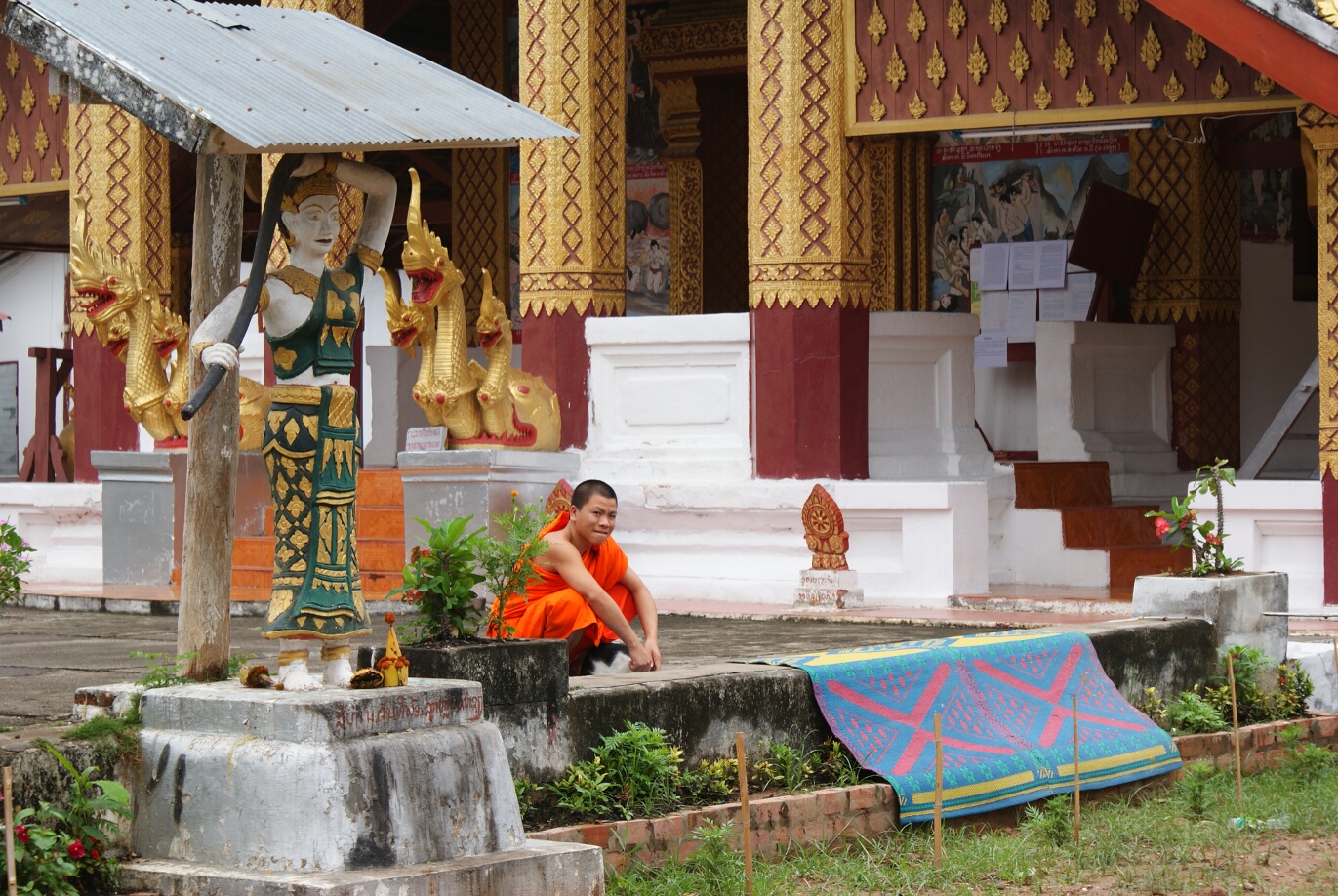 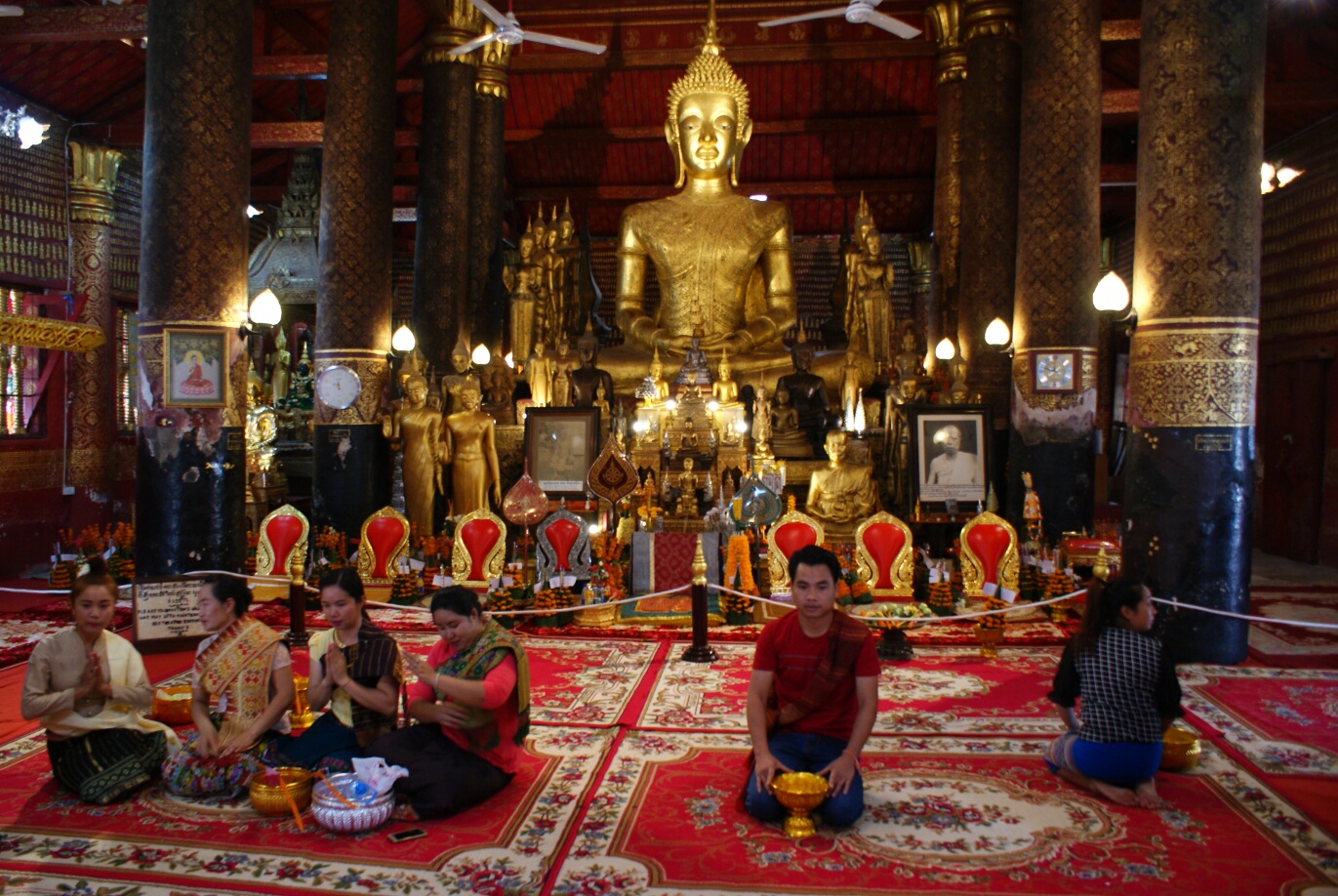 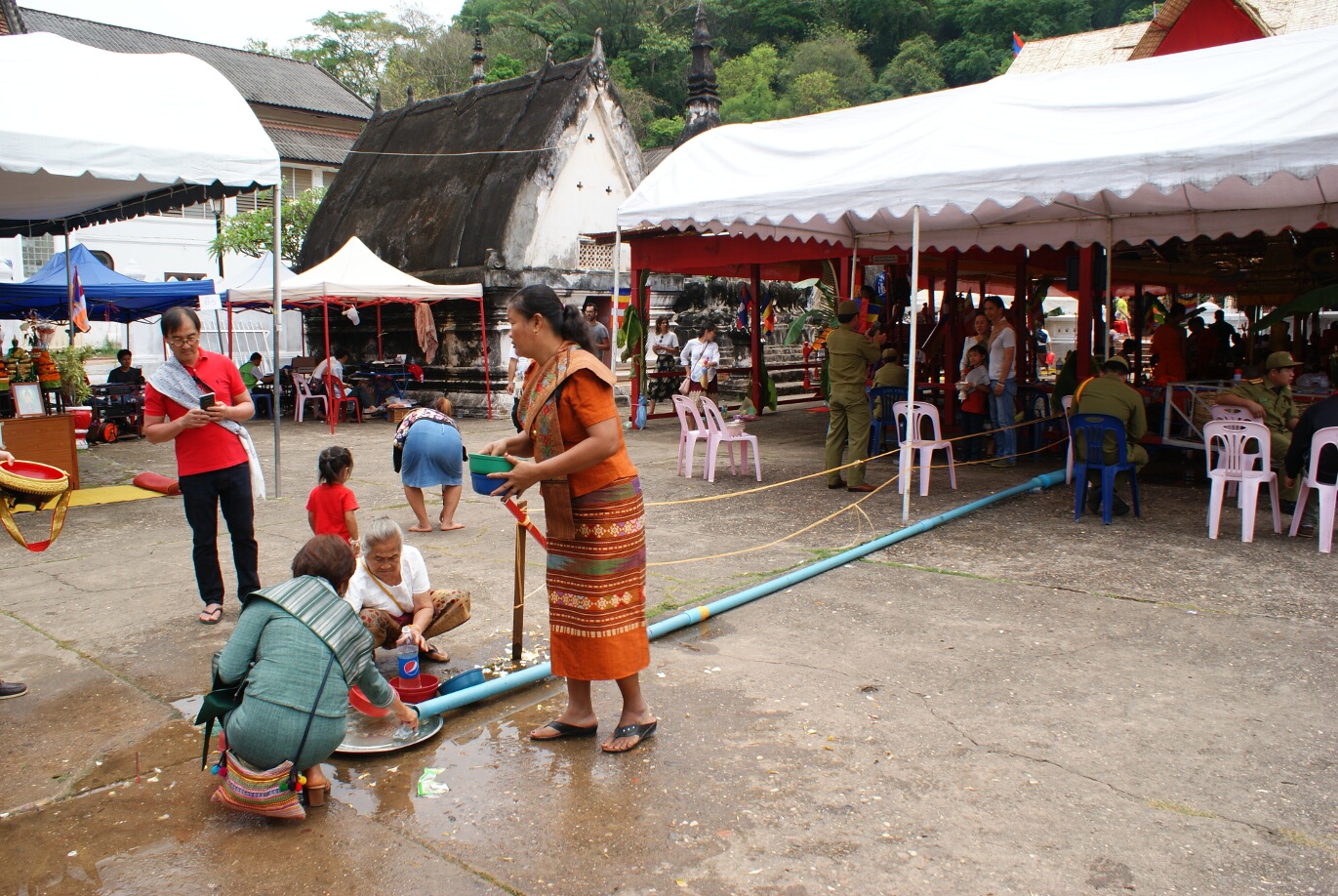 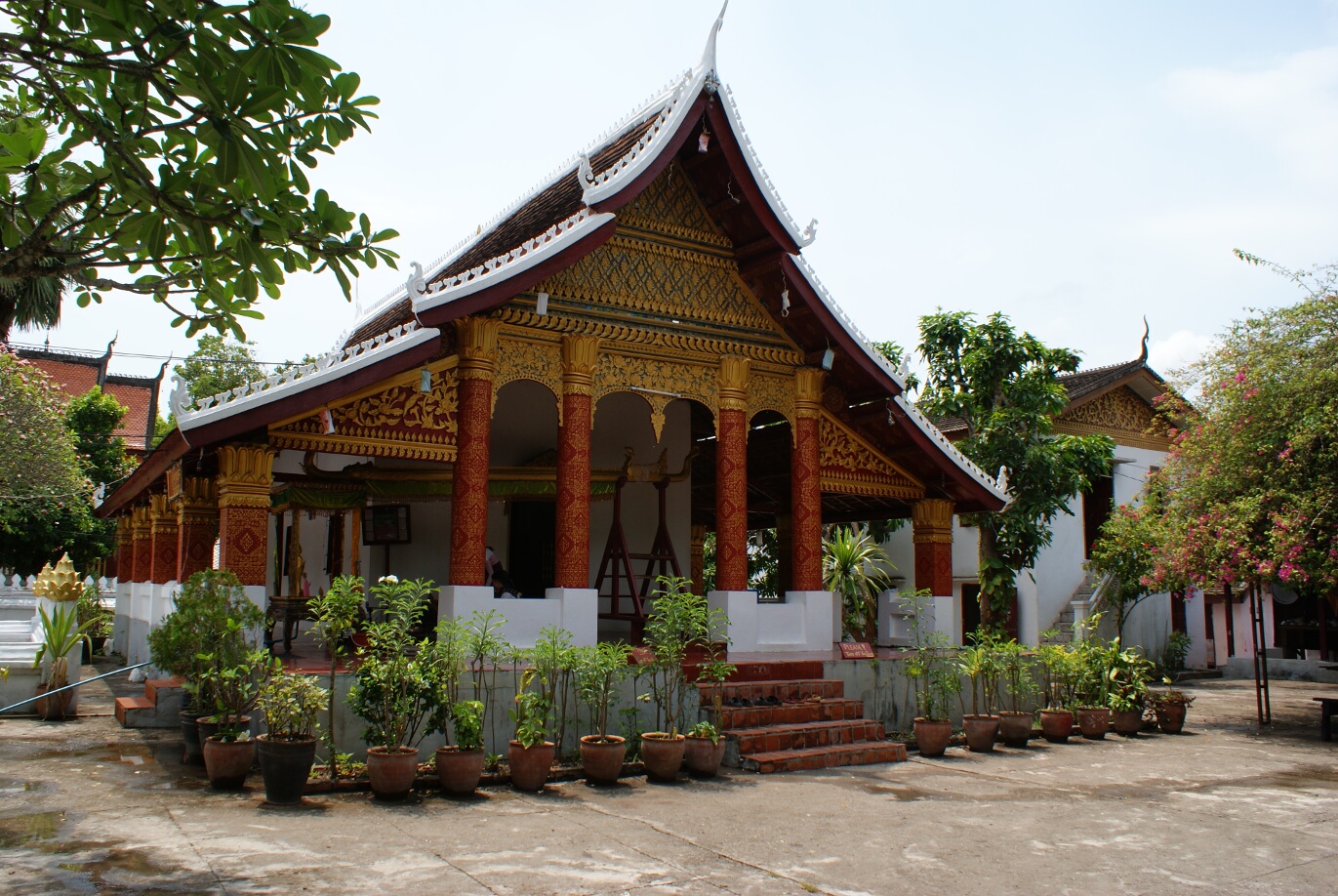 Getting proper background about the history of Laos was important for us and therefore we visited Royal Palace Museum on the banks of Mekong River. It was the only museum where we had to take off our shoes before entering and leave our belongings in the lockers. No photos allowed so we have only the one from outside (many guards making sure tourists don’t take photos but we have seen many attempts anyway). It’s a formal Royal Palace so we saw the throne hall, reception room, king’s bedroom, children’s room and many more. This place is full of portraits, furniture, clothes and many items which belonged to the royal family and are made with pure gold or silver. It’s not very big but everything has a short description in English so it’s worth a visit. 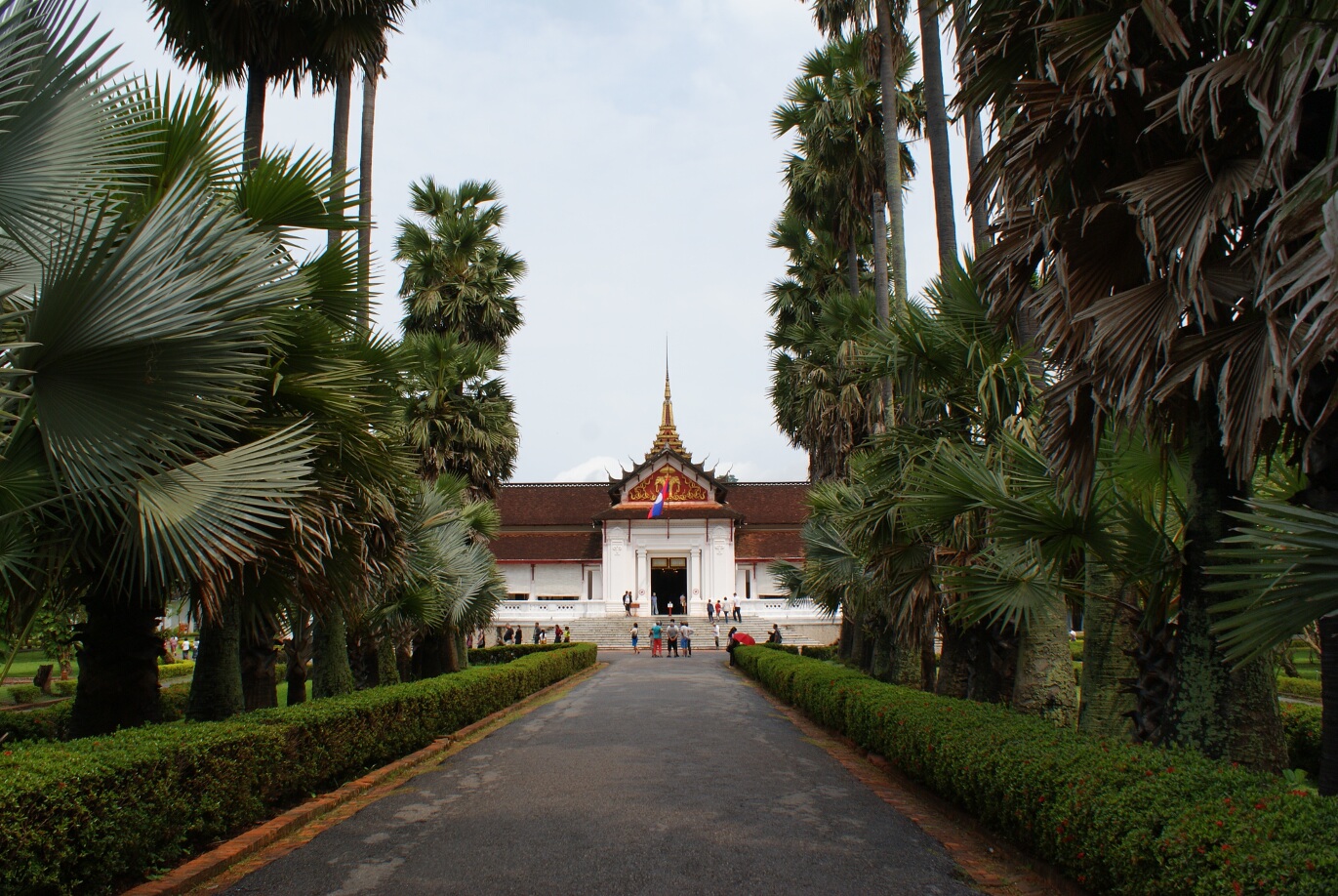 It’s very popular here to observe the alms-giving ceremony in the morning, before sunrise. Monks get out on the streets to collect their daily portion of food, traditionally this consist mostly of rice but nowadays some include also unhealthy snacks. I had mixed feelings after reading on internet how fake this tradition become but since we were there I decided to check it myself and left our room in the darkness of the night. Unfortunately it was raining, I had my tiny umbrella but still it was tricky to take the photos. Just when I left our hostel, I noticed the group of more than 15 monks who stopped in front of two old women on our street and were praying with them. I just observed it from the other side of the street since this is a recommendation for tourists, visible on special signs in many parts of the city. That was the only moments which felt truly original, the closer I got to the main street the more tourists replaced local people. They bough a portion of rice and were waiting for a monks to arrive. I didn’t feel an urge to participate in this fake tourist attraction and many, many tourists broke every recommendation; they came extremely close to the monks, taking the photos of their faces, using the flash, were wearing inappropriate clothes or started chasing the monks for a better photo. Pretty embarrassing to see other tourists behaving this disrespectfully. It’s a highly spiritual ritual for local community and we should keep that in mind. Therefore be respectful and only participate in the ceremony if it’s something with great meaning to you. 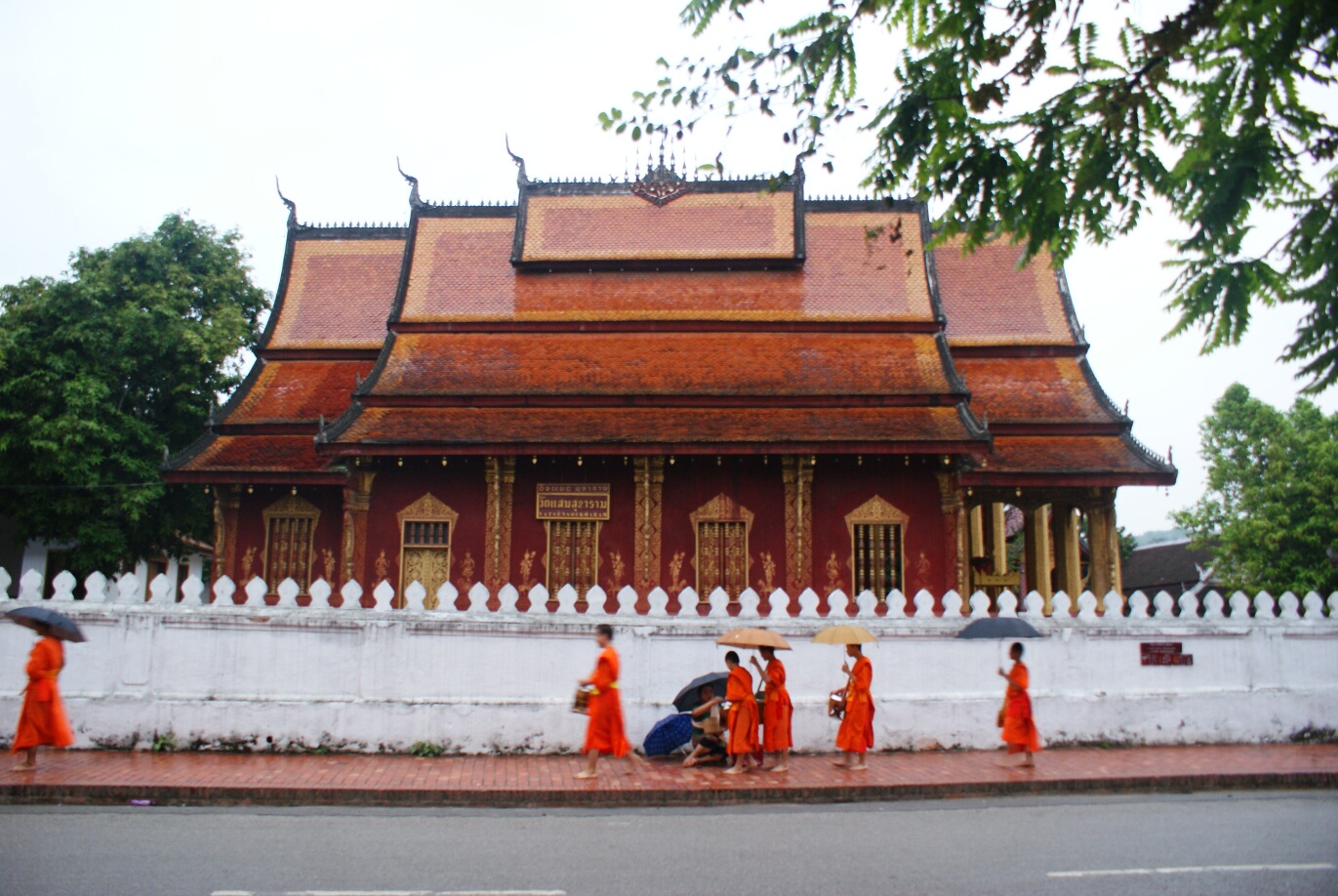 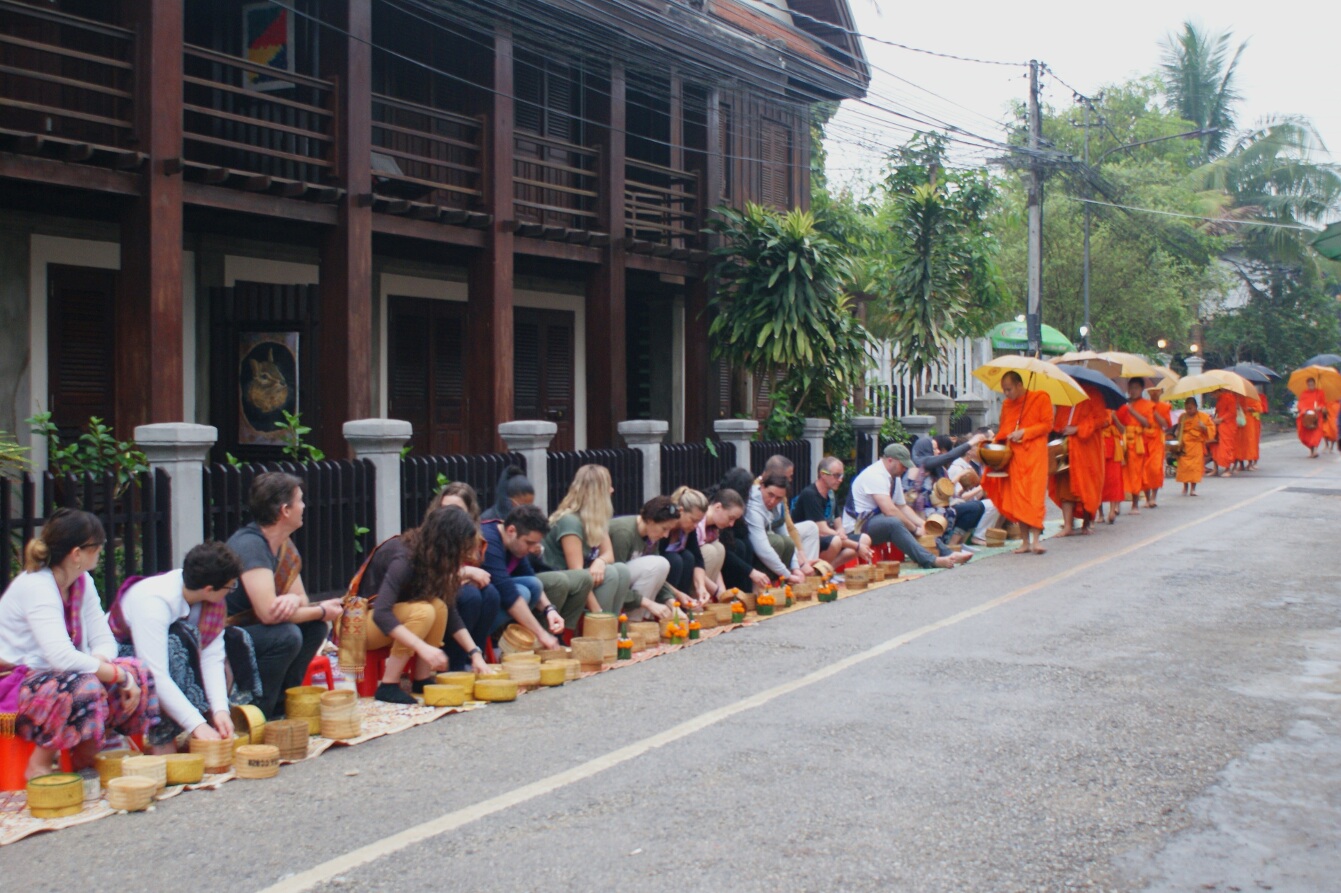 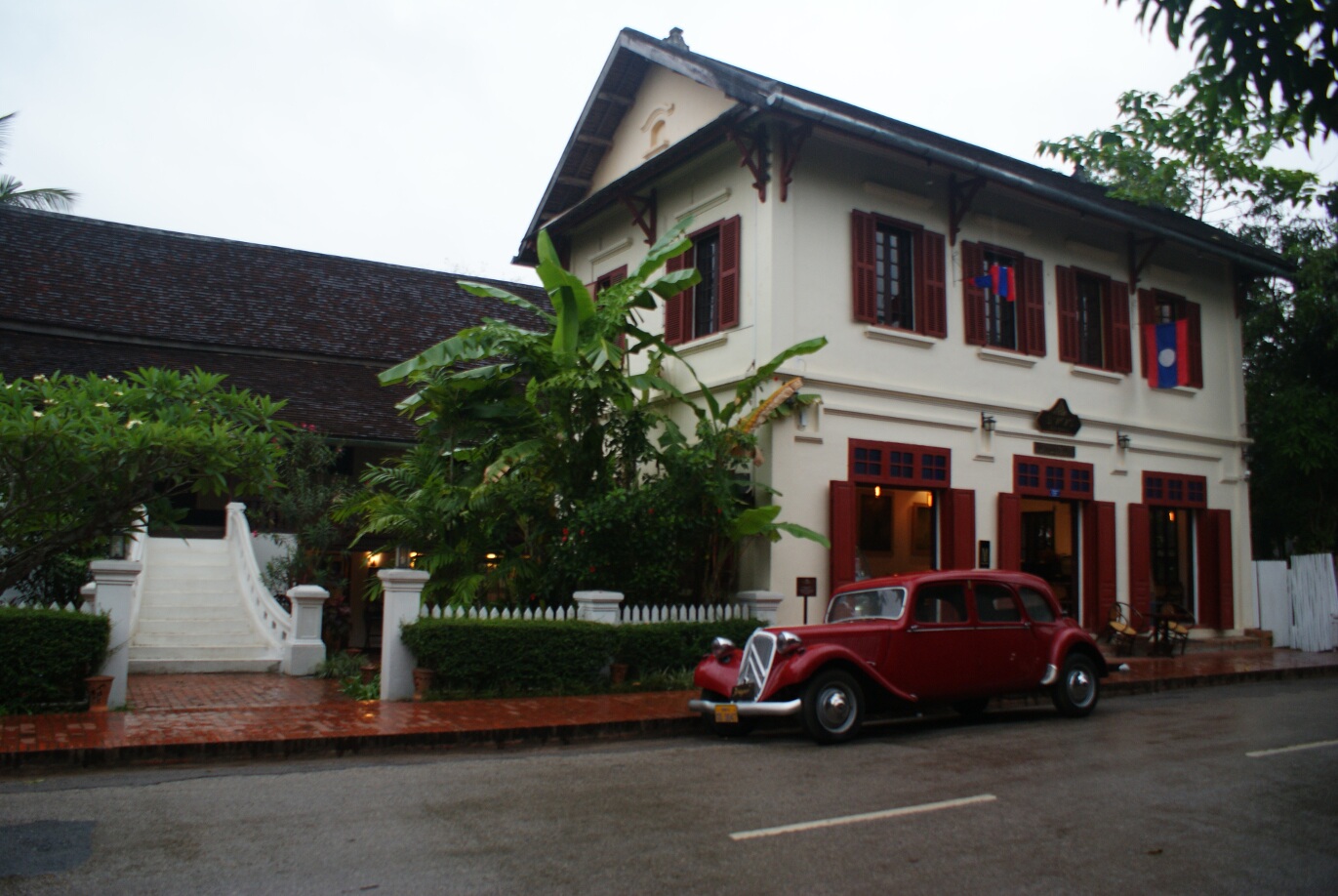 Muang Ngoy was our next destination, a village located on the banks of the Nam Ou River where we got by minivan and boat and where I have seen an enormous amount of butterflies! Pretty amazing to walk being surrounded by several dozen of them at the same time :) Bungalow with hammock, bananas from the garden and the mountains around made this place really special for us.

Share:
Previous: Vang Vieng, getting closer to... Next: Muang Ngoy: our small bungalow,...