First something about how we got here. In a nutshell, after a short boat ride from Don Det to Nakasong, we took a bus to Pakse where we were supposed to have a lunch break. Instead of this, the bus stopped on the side of the road and we had to change to another bus. Six of us ended up this way on a local bus without anyone speaking English. For the next 7h we were stuck on the bus without any breaks. During the bus ride a group of women entered the bus a few times with chicken, fish and meat skewers sold as a snack. We arrived to Thathek late in the evening and decided to buy immediately something to eat since we were really hungry after the whole day without almost any food (we were not brave enough to buy sth on the bus). Around the bus station were many hostels but it was already dark so we just wanted to find something closeby and go to sleep. Luckily after checking few options, we found a guesthouse with a clean room and a good price :) In the morning we took a VIP bus at 9:15 which was really comfortable! This time we had a few breaks to use a toilette and to buy some food. After 6.5 hour we arrived at Southern Bus Station in Vientian, 12km from the city center. It was necessary again to take a tuk-tuk, drivers inside the bus station where asking 60 000 Kip for the ride, we managed to knock the price down to 30 000 Kip negotiating with drivers waiting just outside the bus station. We decided to stay in Vientian next 3 days to celebrate the Lao New Year in the capital of the country :)

Vientian has a great variety of Buddhist temples and we spend the first day wandering around a downtown in search of our favourite one. There is no entrance fee to the most of them, with the exception of Phra Keo and Wat Sisaket. Interior of the first temple is now a small museum with Lao religious art. 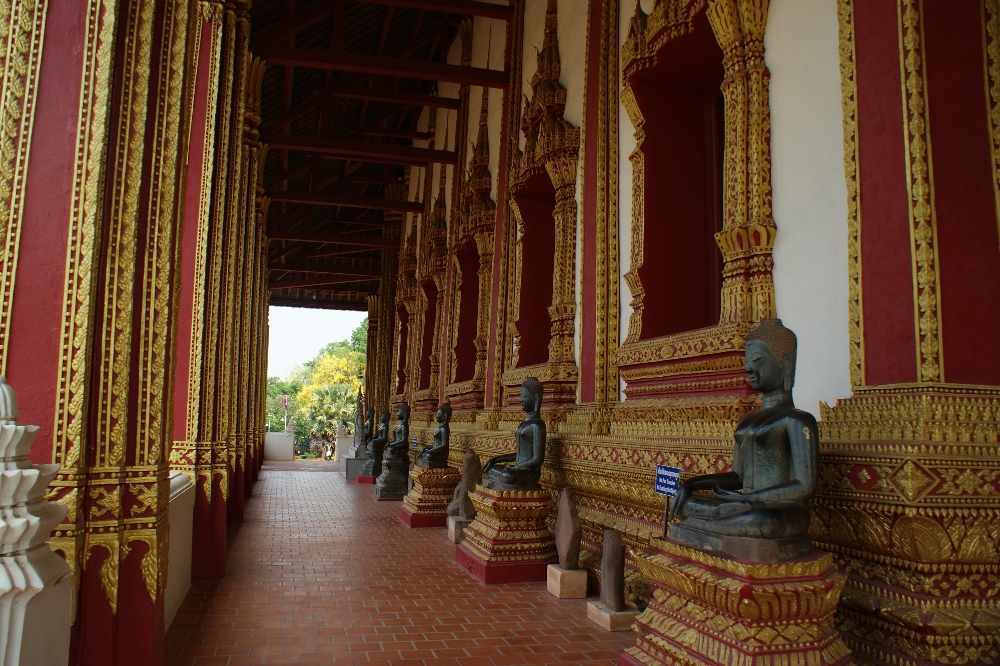 The second one on the contrary was quite unique, characterized by walls full of tiny Buddha statues (thousands of them!). Along the wall surrounding the main temple, there was also a long line of seated big Buddhas. 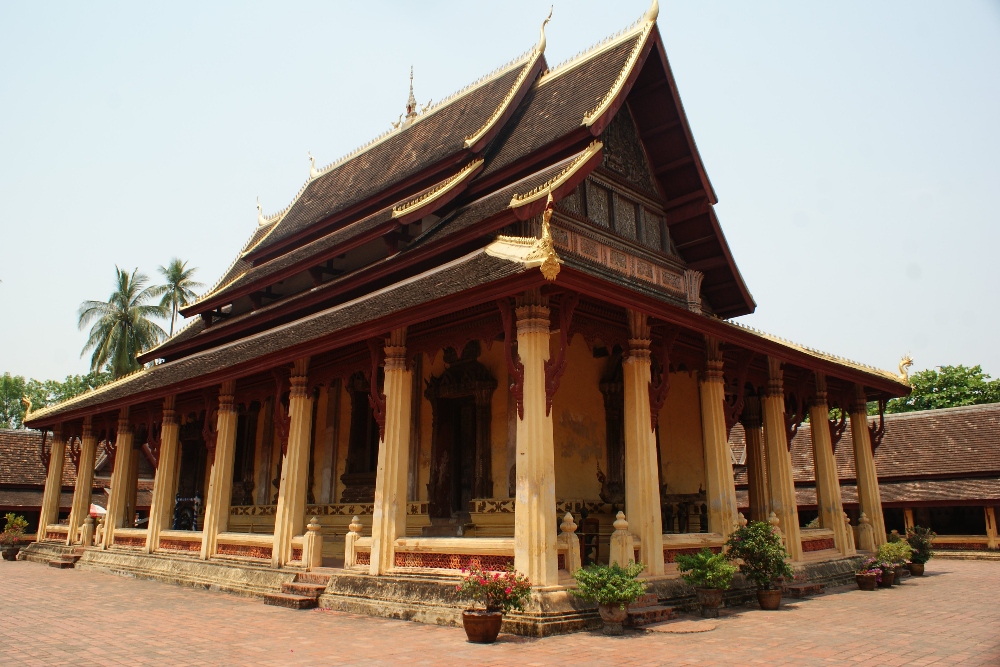 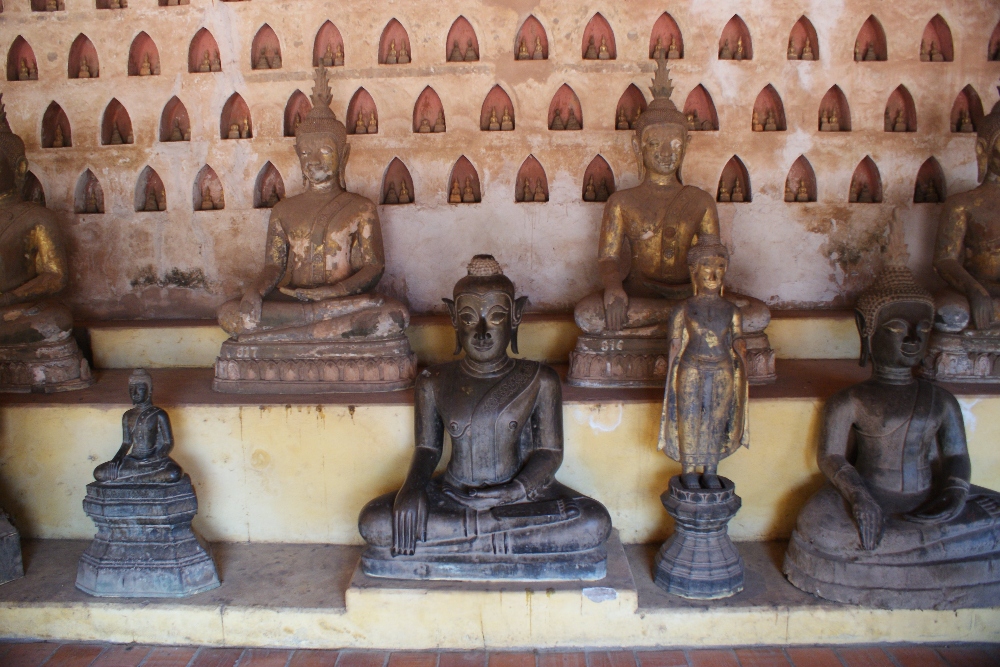 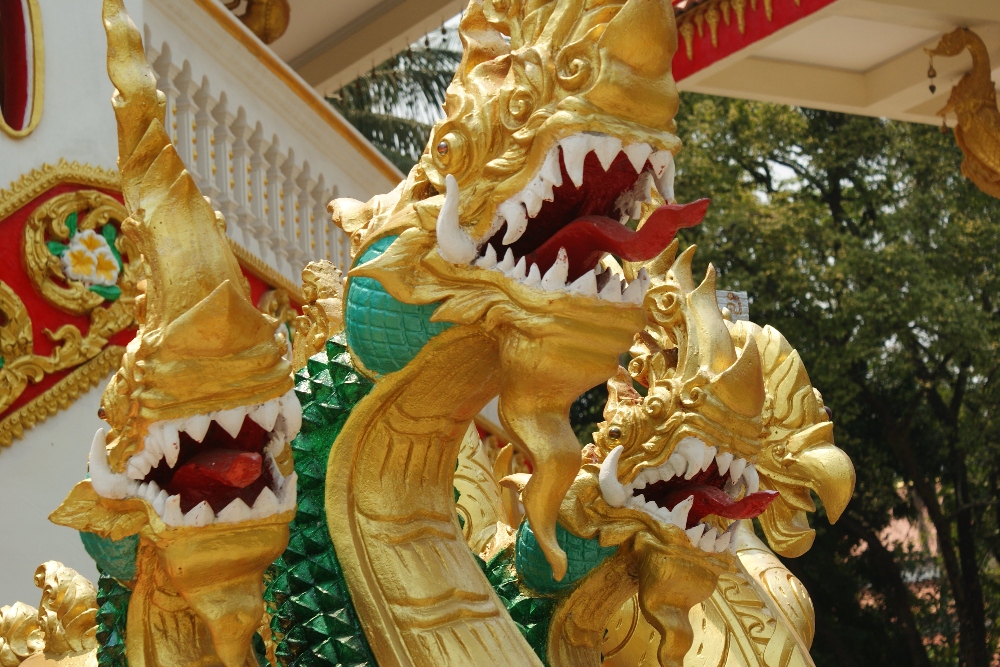 Naga guarding the entrance to the temple 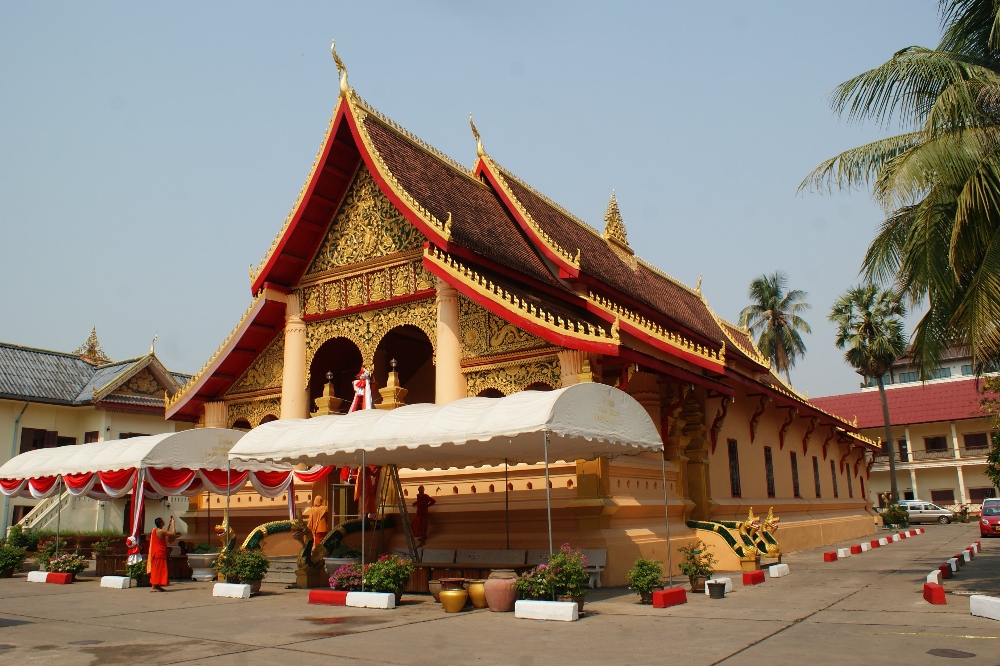 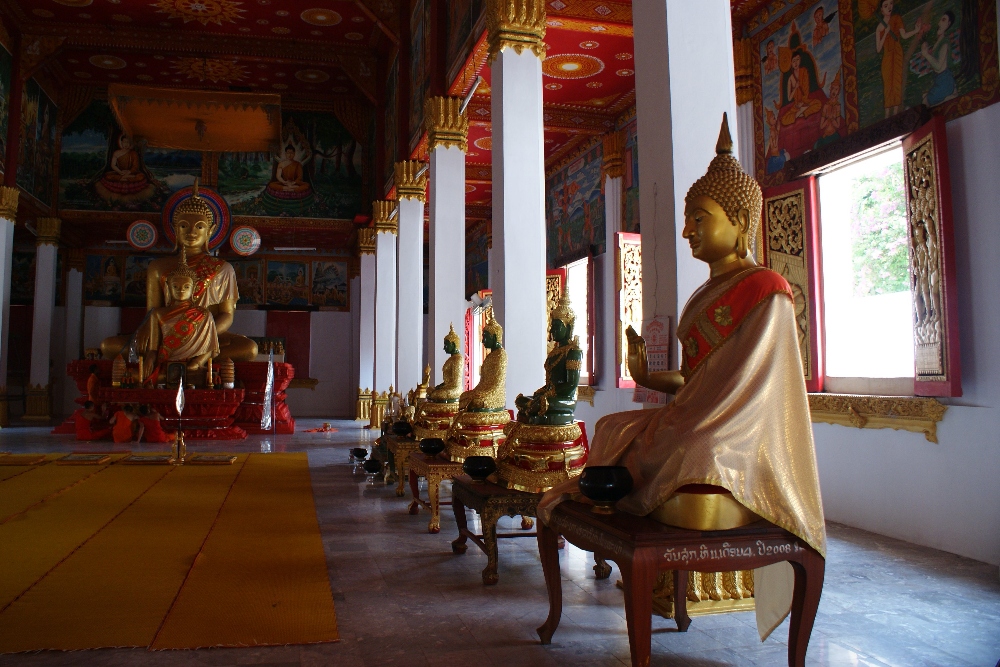 Inside one of a temple. You are usually welcome to enter and have a look, though taking of your shoes is required. 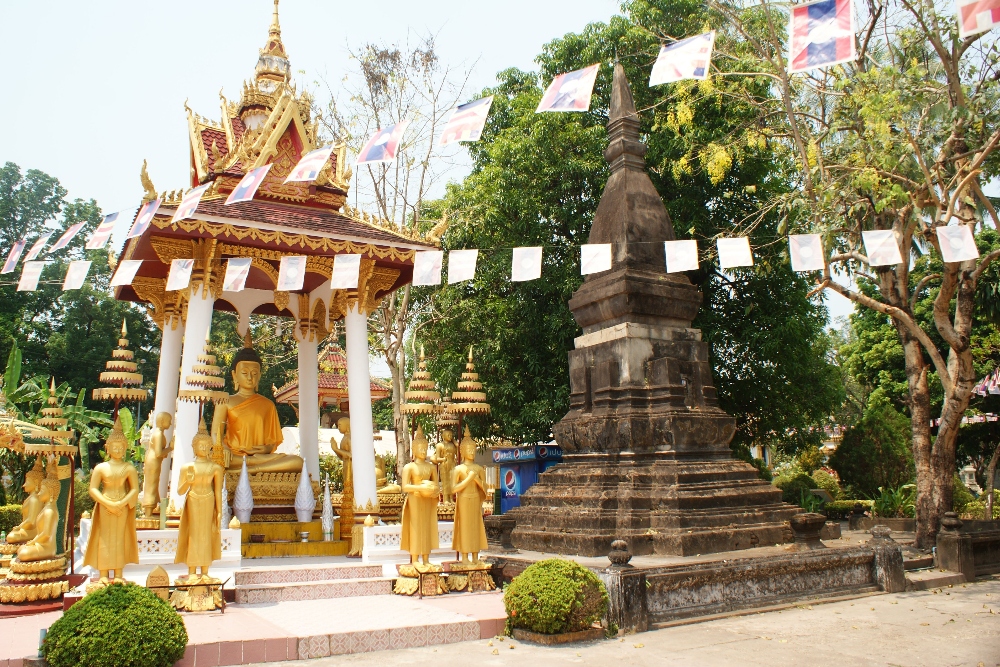 More gold statues of Buddha next to the temple

After a late lunch and a break to cool down we headed off to COPE center. Laos, similar to Cambodia has his own dark period in the history which still has an influence on people’s lives. During 9 years of the Vietnam War (1964 - 73), more than 270 million cluster bombs were dropped all over the country. Up to 30% of them did not detonated and many villages are still threatened with unexploded bombs. Despite the effort of  bomb clearance every year many people (around 100) dies and almost half of the victims are children. The bombs usually explode  when people are farming, cooking on fire or when children unawares of the danger play with small bomblets (which are about the size of a tennis ball) :( COPE offers rehabilitation and provides artificial limbs, walking aids and wheelchairs for victims. More importantly, it gives them a hope for a normal life. 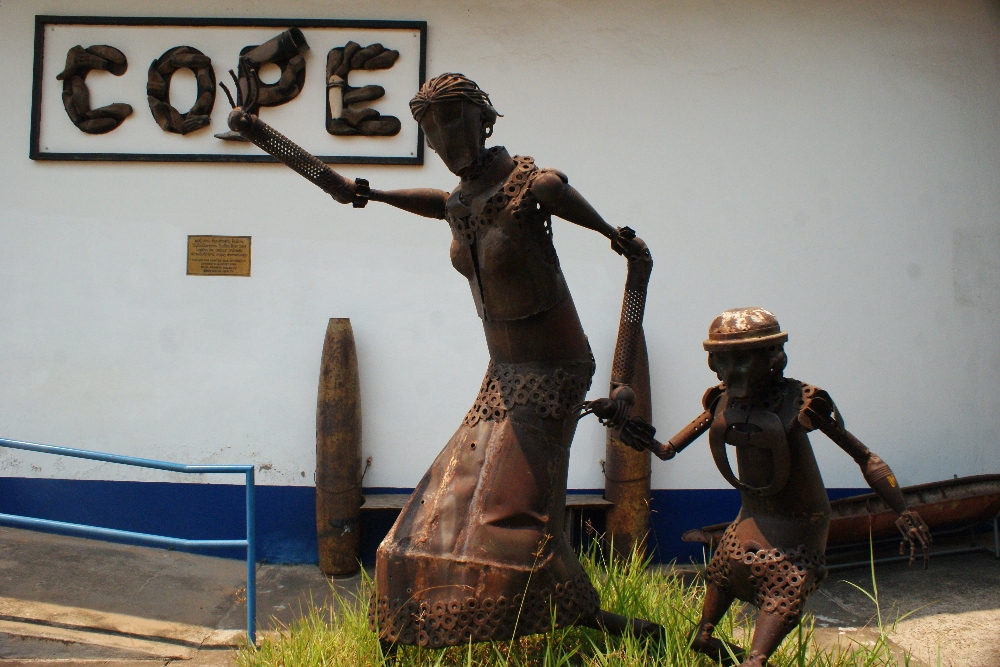 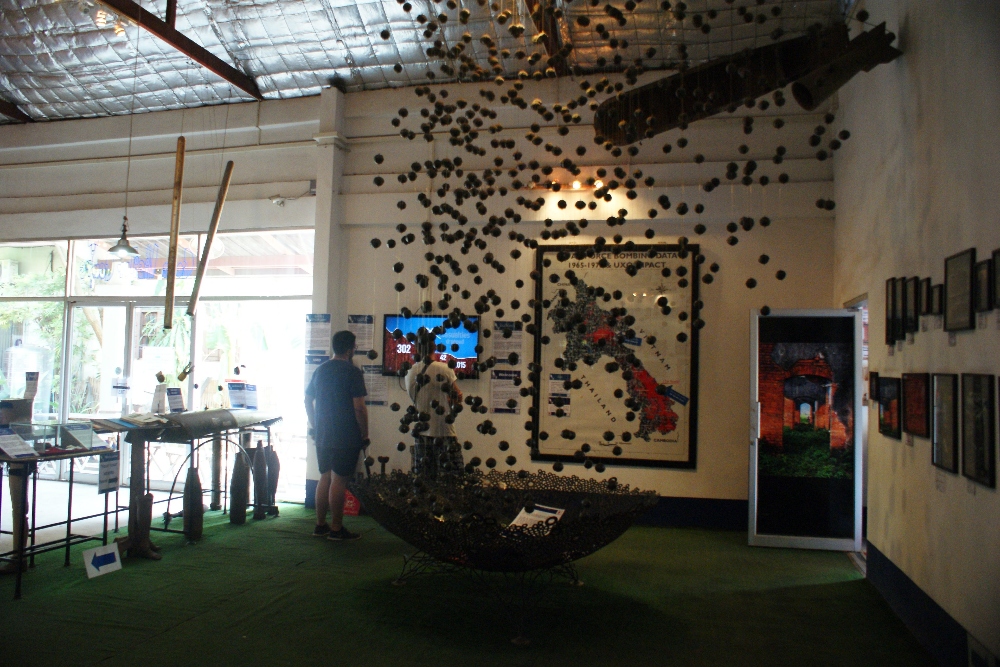 Each of the cluster bomb contains around 600 to 700 small bomblets... 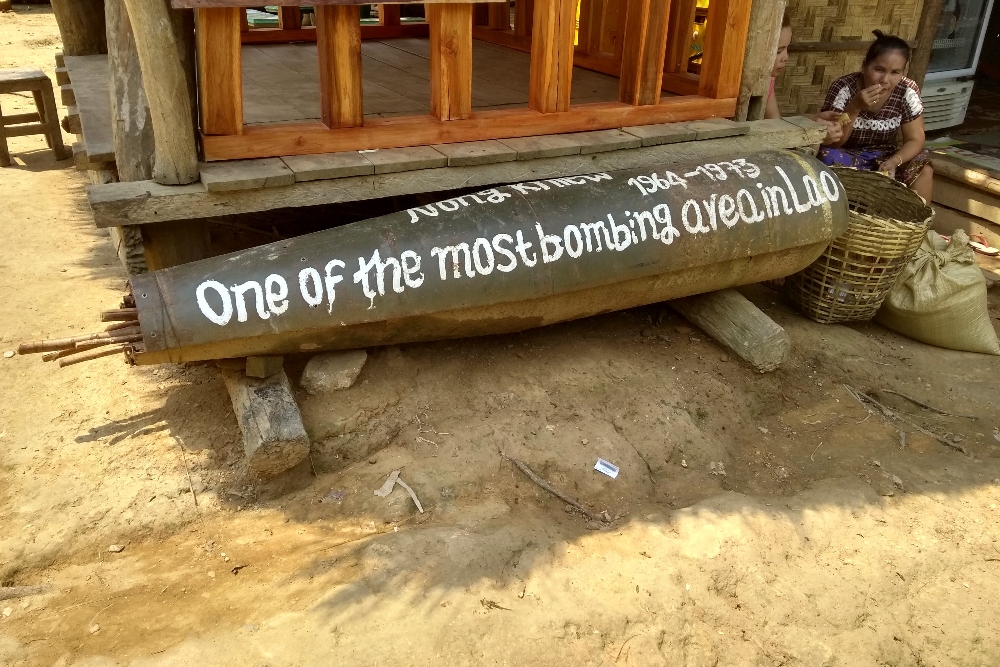 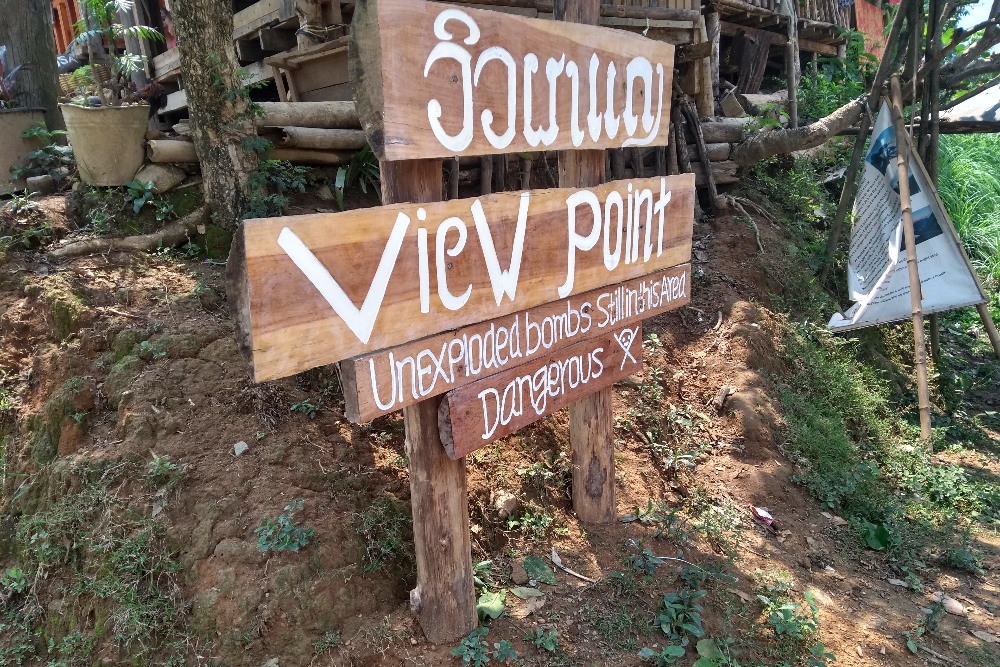 It is recommended to not walk off the path

Next, we explored the area of Mekong promenade. We noticed really nice looking place for a night market (apparently opened in 2018) with new, wooden stands, however half of the were empty and most of the vendors were still selling on the street. The night market stretched from the sunset view point to the Chao Anouvong statue. This area of the city was really crowded in the evening. 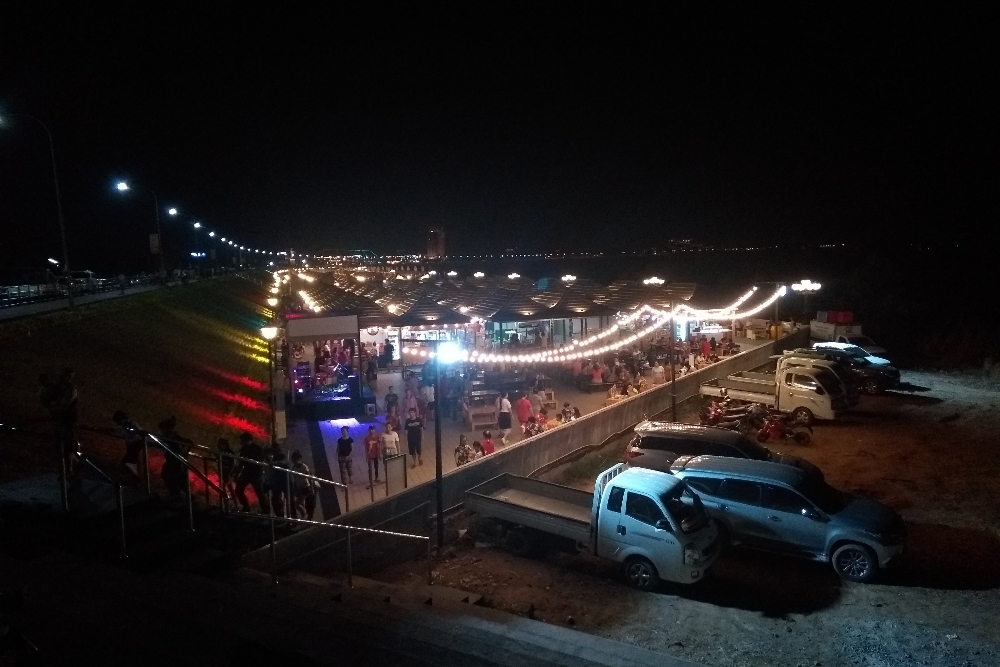 Night market glowing in a distance... 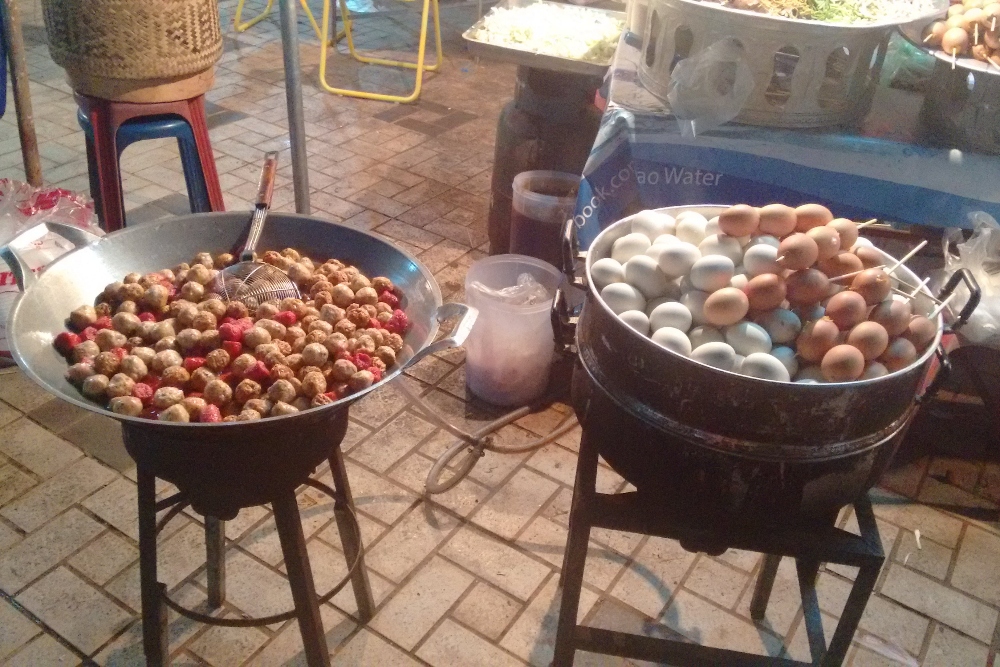 Since the food on the market didn't have any English descriptions, we opted to play it safe and go to a local restaurant.

Share:
Previous: Don Det, a gateway to... Next: Buddha Park in Vientian