We started our day with the early bus to Wat Rong Khun, known among tourists as the White Temple. We used a local bus leaving from the Chiang Rai Bus Terminal 1 (just next to the night bazaar). It was very easy to find the correct bus stop because it was labeled with the name of the temple and time schedule. We bought a ticket on the bus without any problems (you just need to have a change). After about 20 min of the bus ride, the woman selling the tickets was pointing the place outside the window with a huge number of tourists in front of it and we knew it’s time to get out. 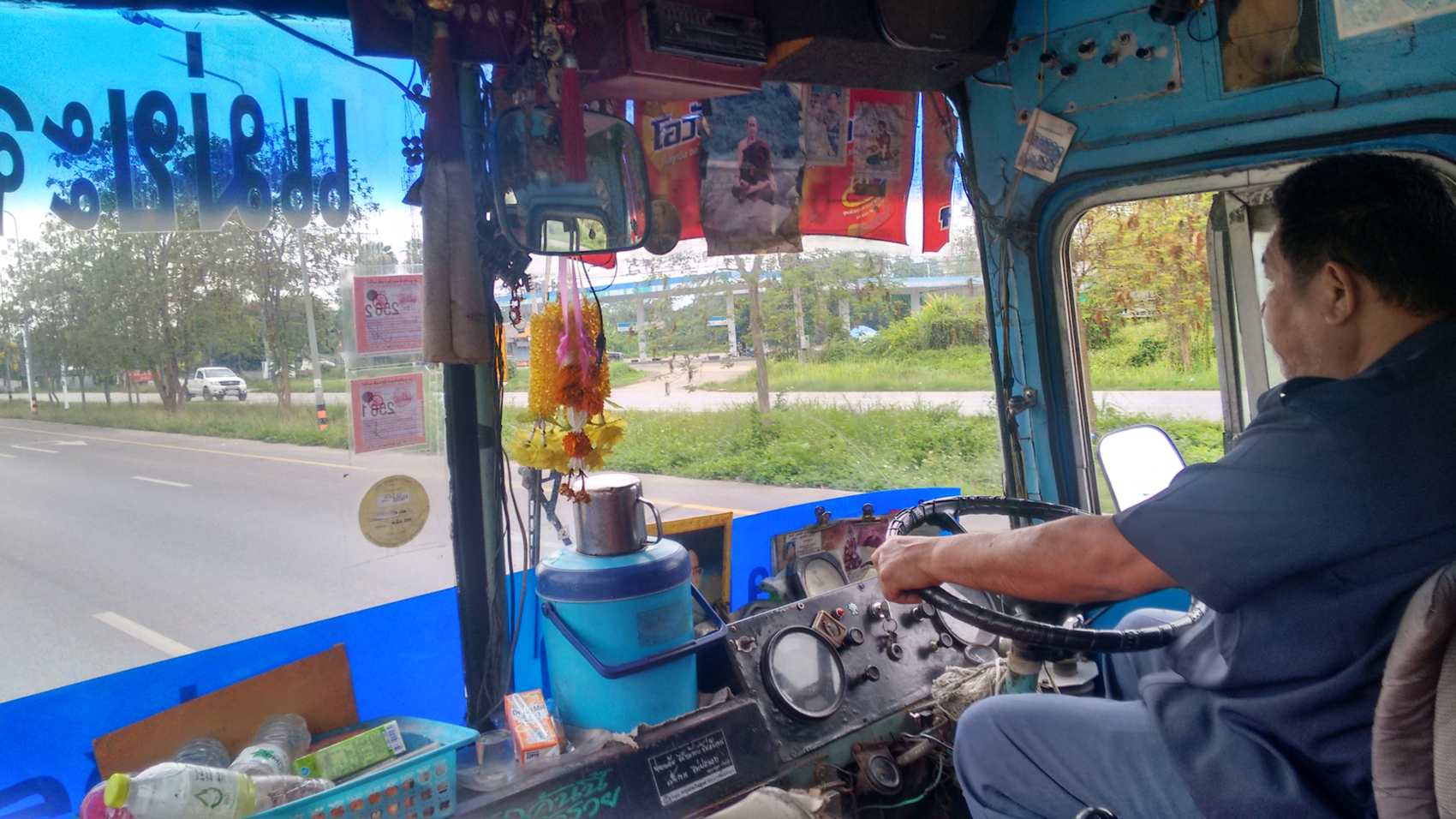 The place was already full of people! It took us maybe 1 hour to visit White Temple and it made a huge impression on us :) It’s really well maintained, all small details look just perfect ! You can clearly notice that artist, Ajarn Chalermchai Kositpipat and 120 of his followers, devoted their lives to create this magical place. His plan is to make modern Thai Buddhist art famous all over the world and his ambitious vision needs to be carried on by his followers since he assumes that completing this project will take another 60 to 90 years of hard work. Freedom is very important for the author, therefore he doesn’t accept any donations from the government or politicians and only the money from selling the tickets is used to finance his project. 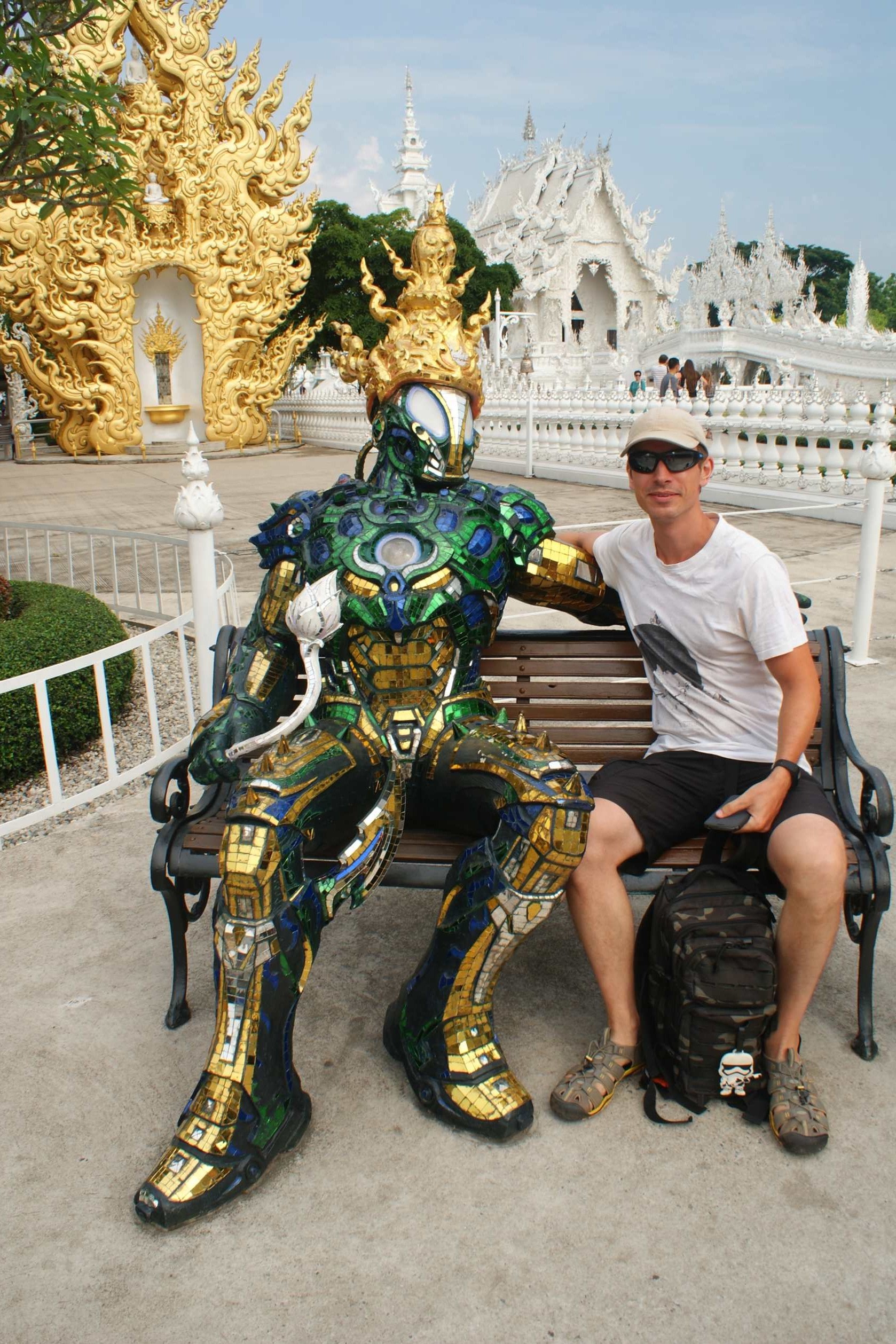 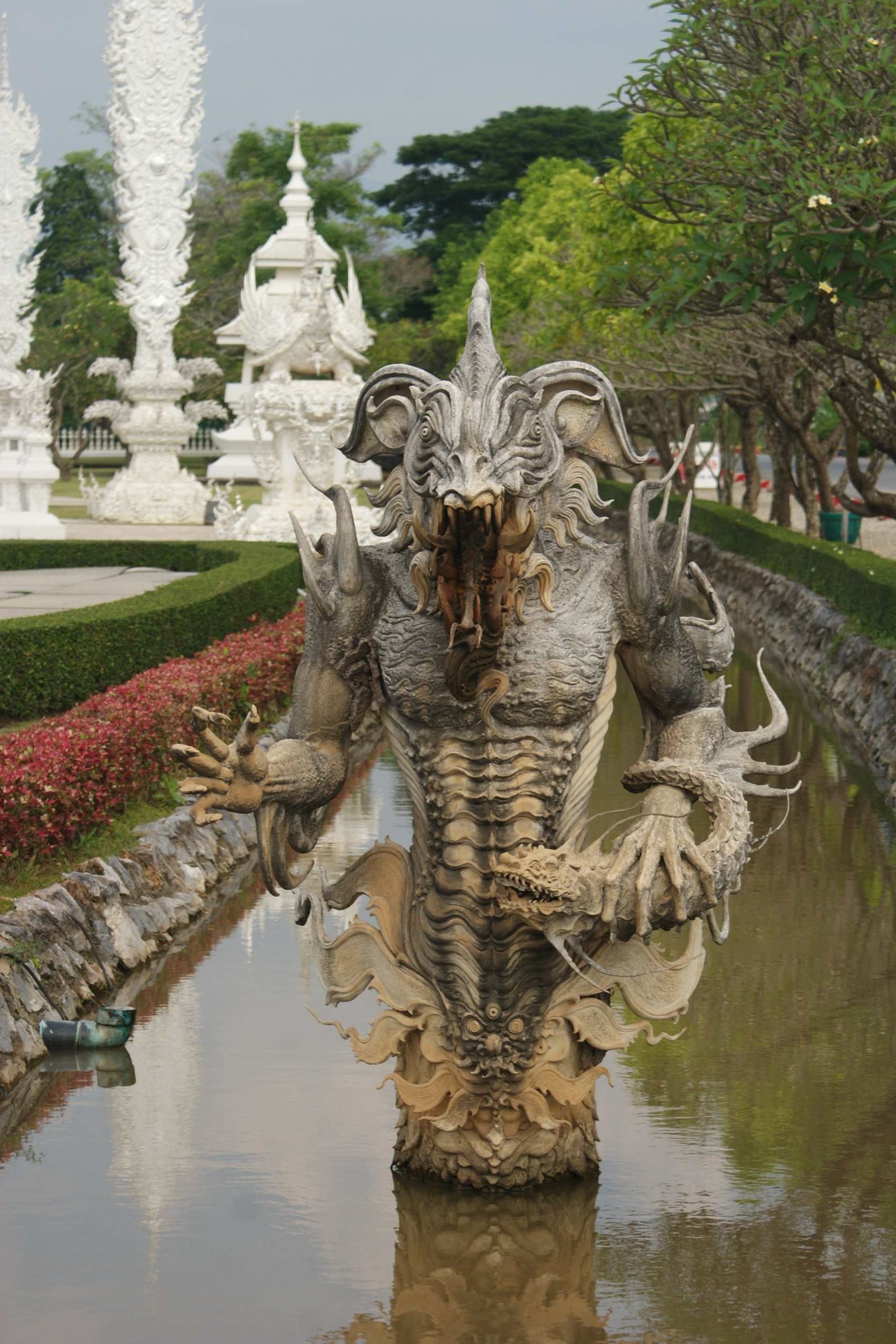 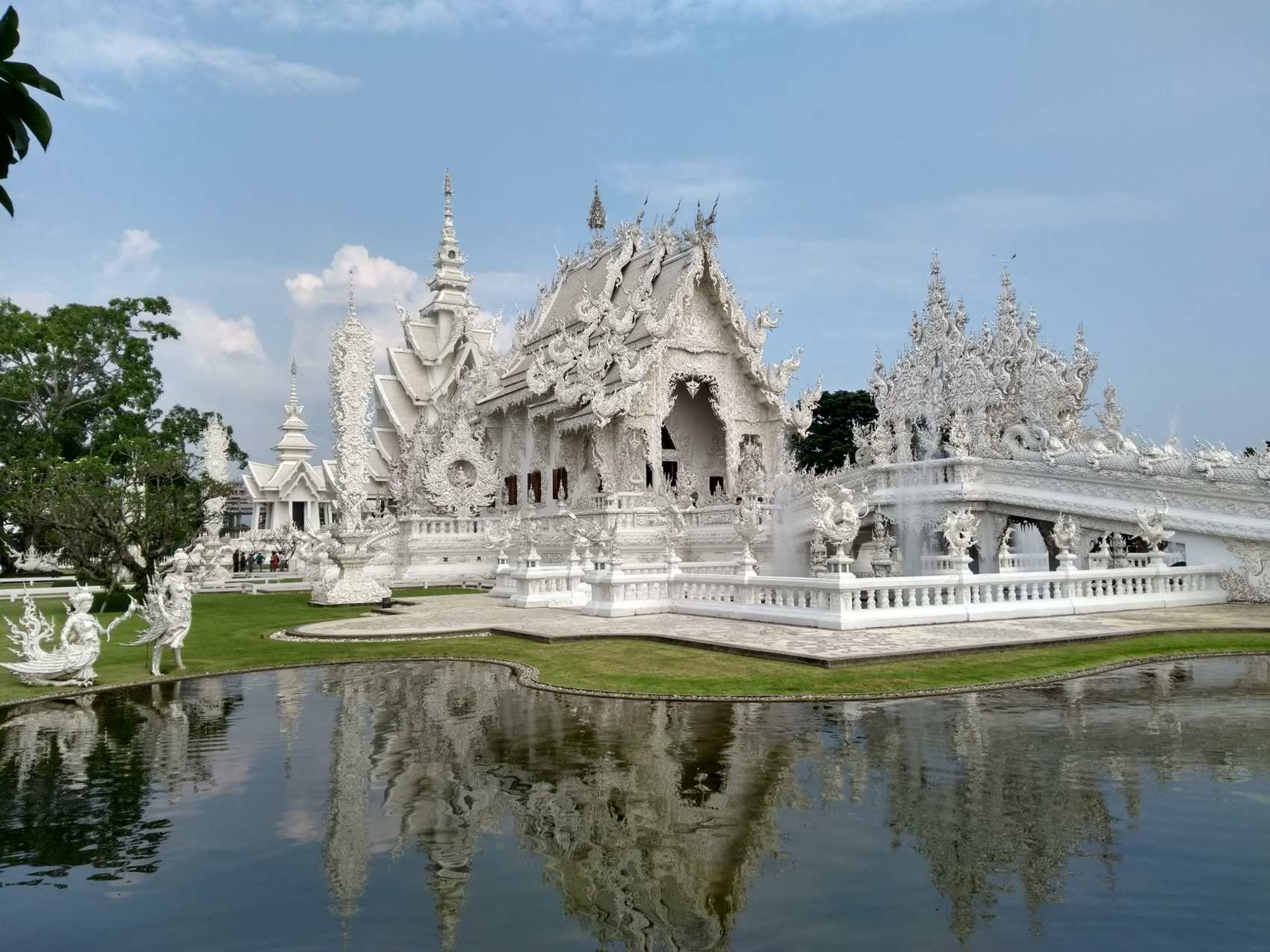 The main temple, reflected in the water, is full of the murals painted by the author of this place, Ajarn Chalermchai 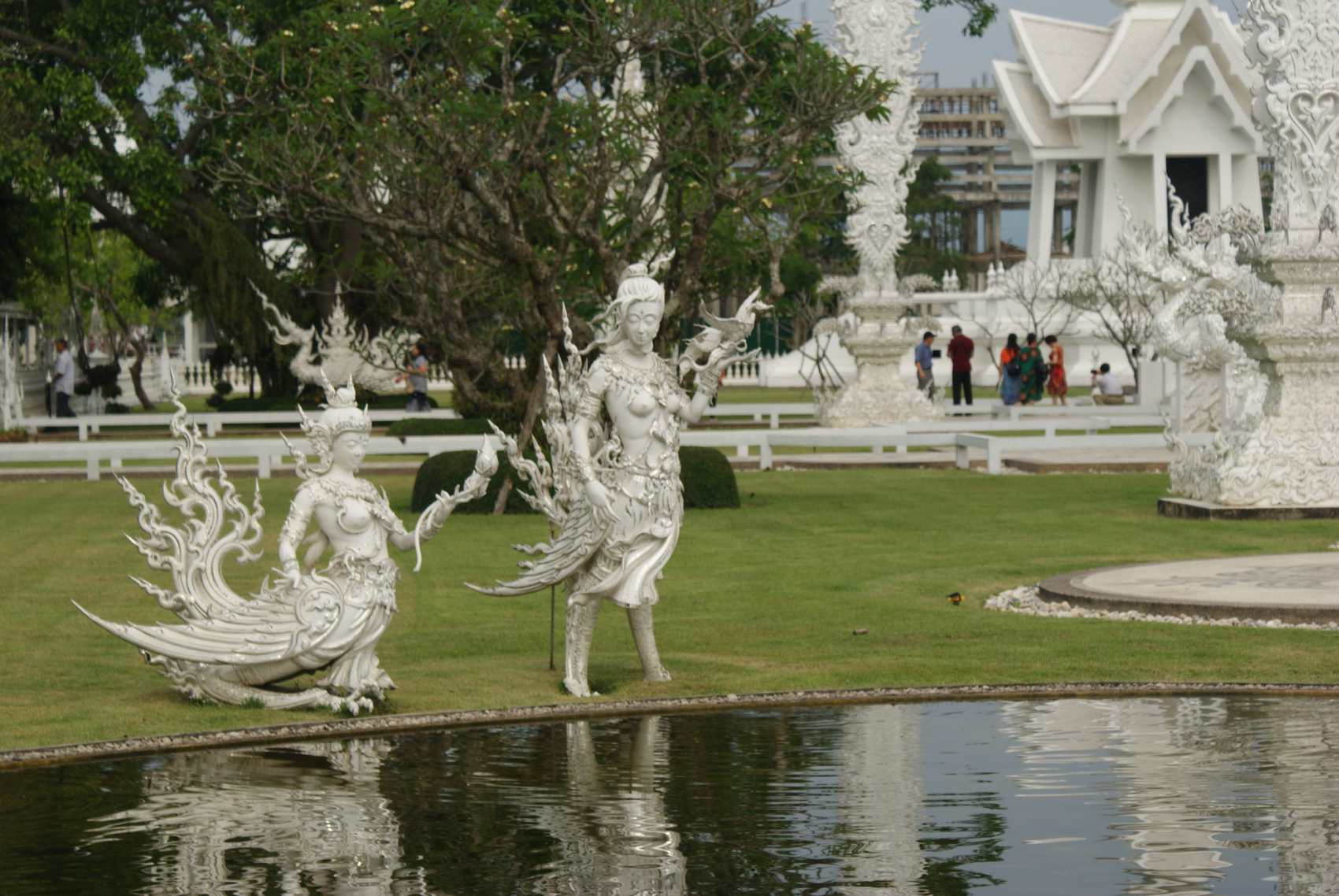 First we walked through the main temple (no photos allowed inside) to see on one of the walls the paintings of multiple super heroes (e.g. Superman), the World Trade Center on fire during the terrorist attack with the portrait of the main offender, Osama Binladen in the company of George Bush, both looking at us with their evil eyes. It’s a symbol of hate which led to the war and death of innocent people, both Muslims and Americans. To get inside, we first had to cross a bridge above the sea of sculptures in the shape of people’s arms, trying to reach us. 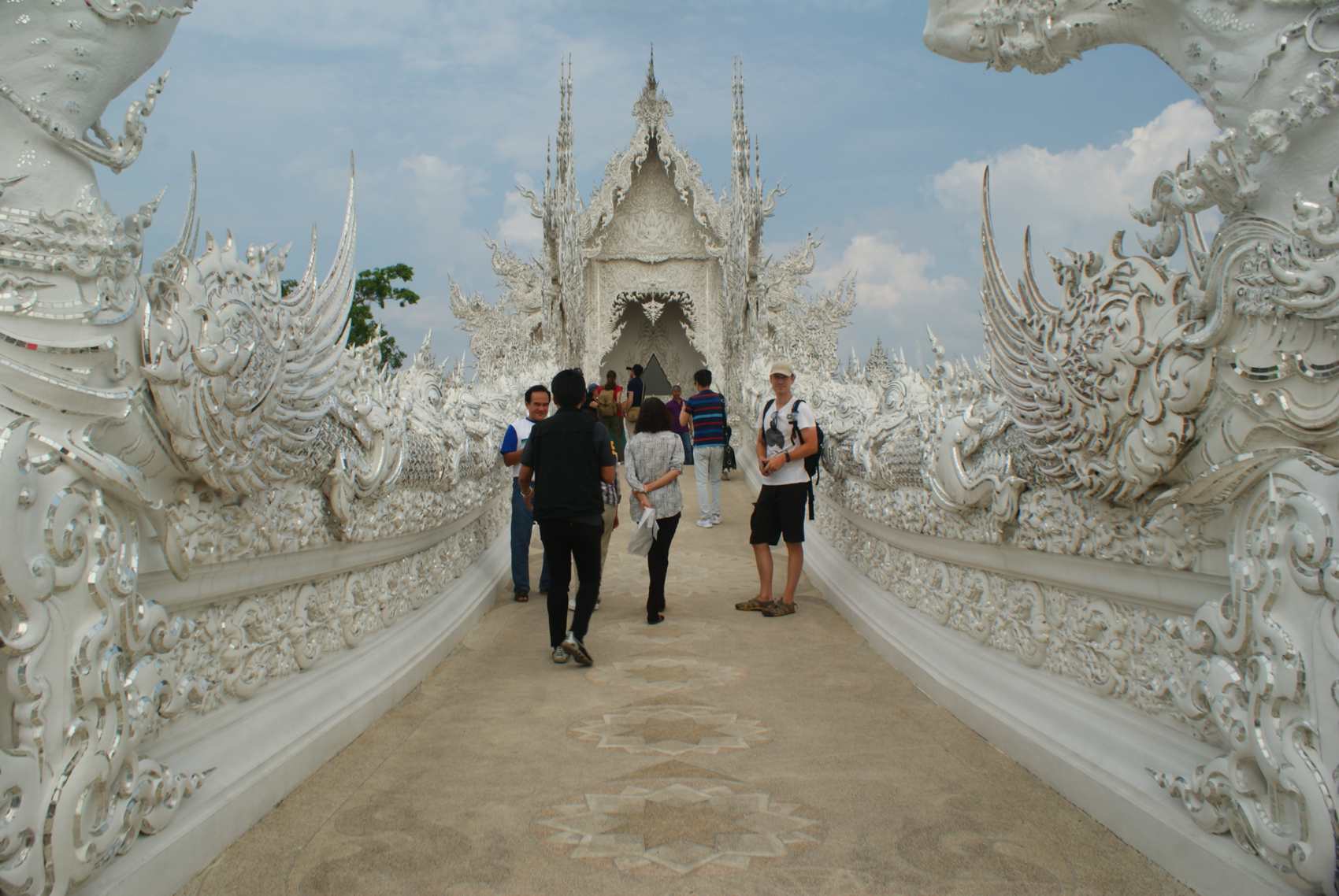 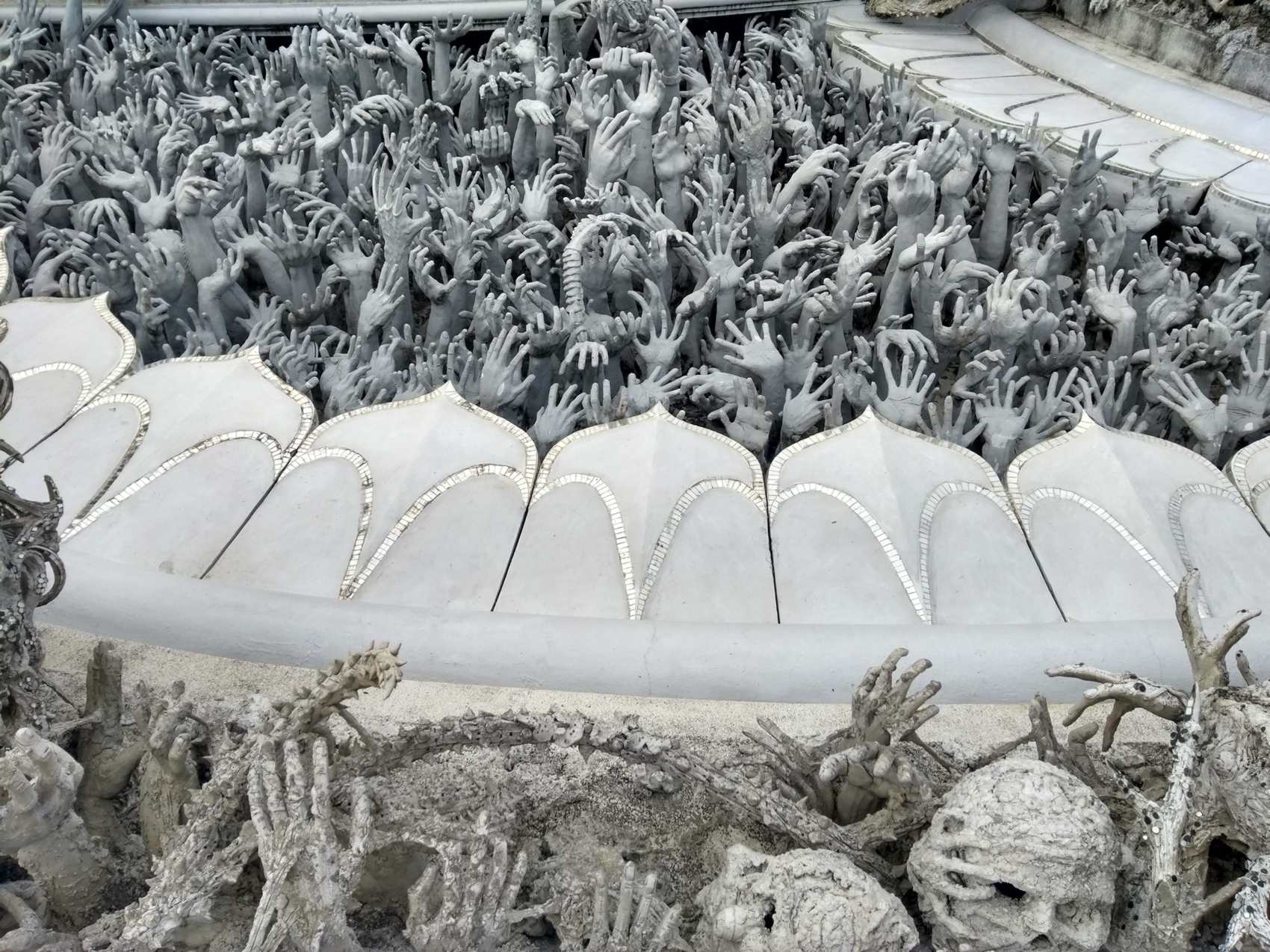 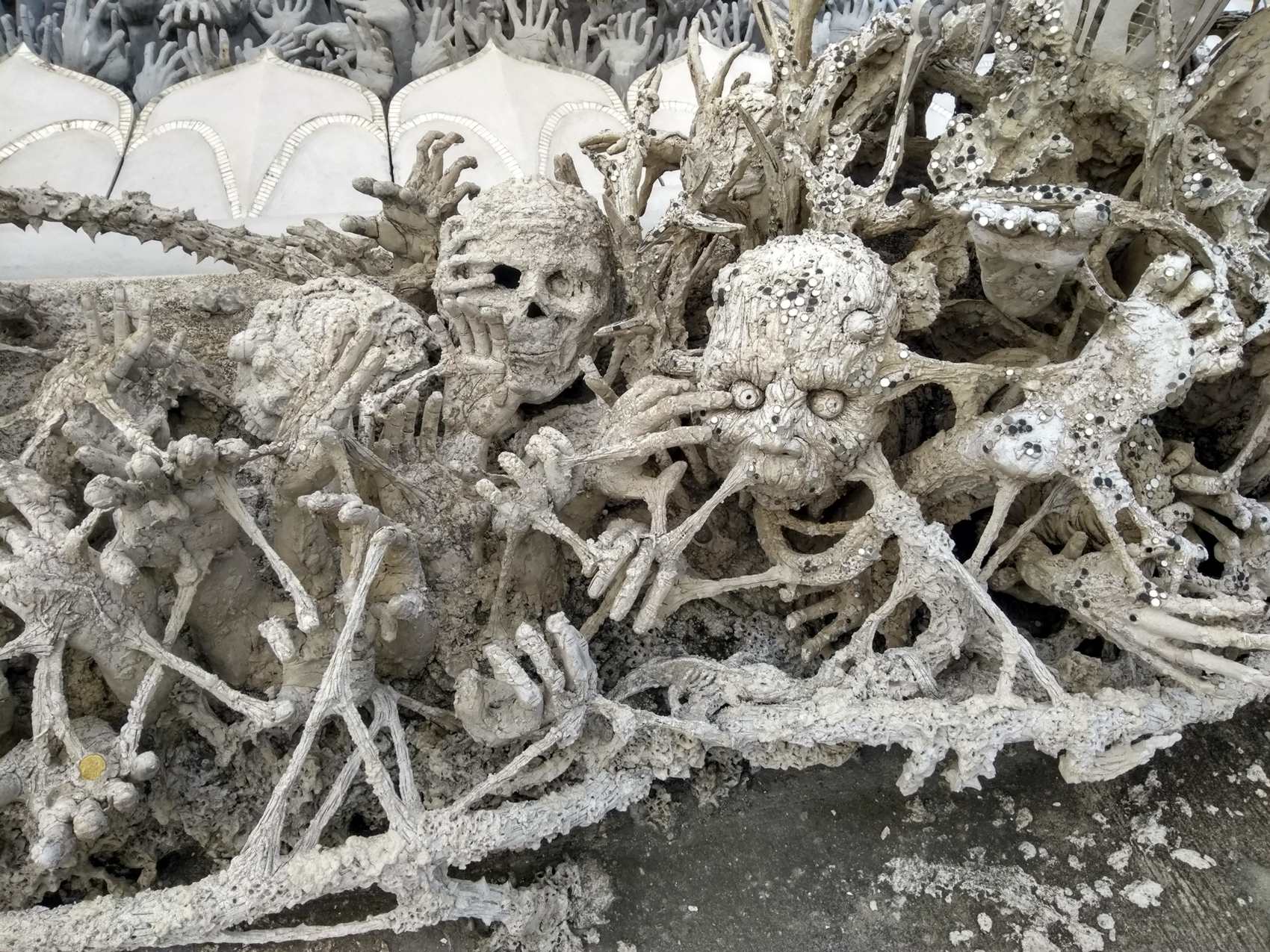 There are a few more buildings, one gold and one white temple, both still under construction. However, another building (close to the exit) caught our attention! The huge golden house turned out to be … the restroom! That was definitely the most beautiful toilet I have ever used :) This place was in general really lovely, the tiny mirrors decorating the sculptures and domination of two colors made this place very harmonized and unique. 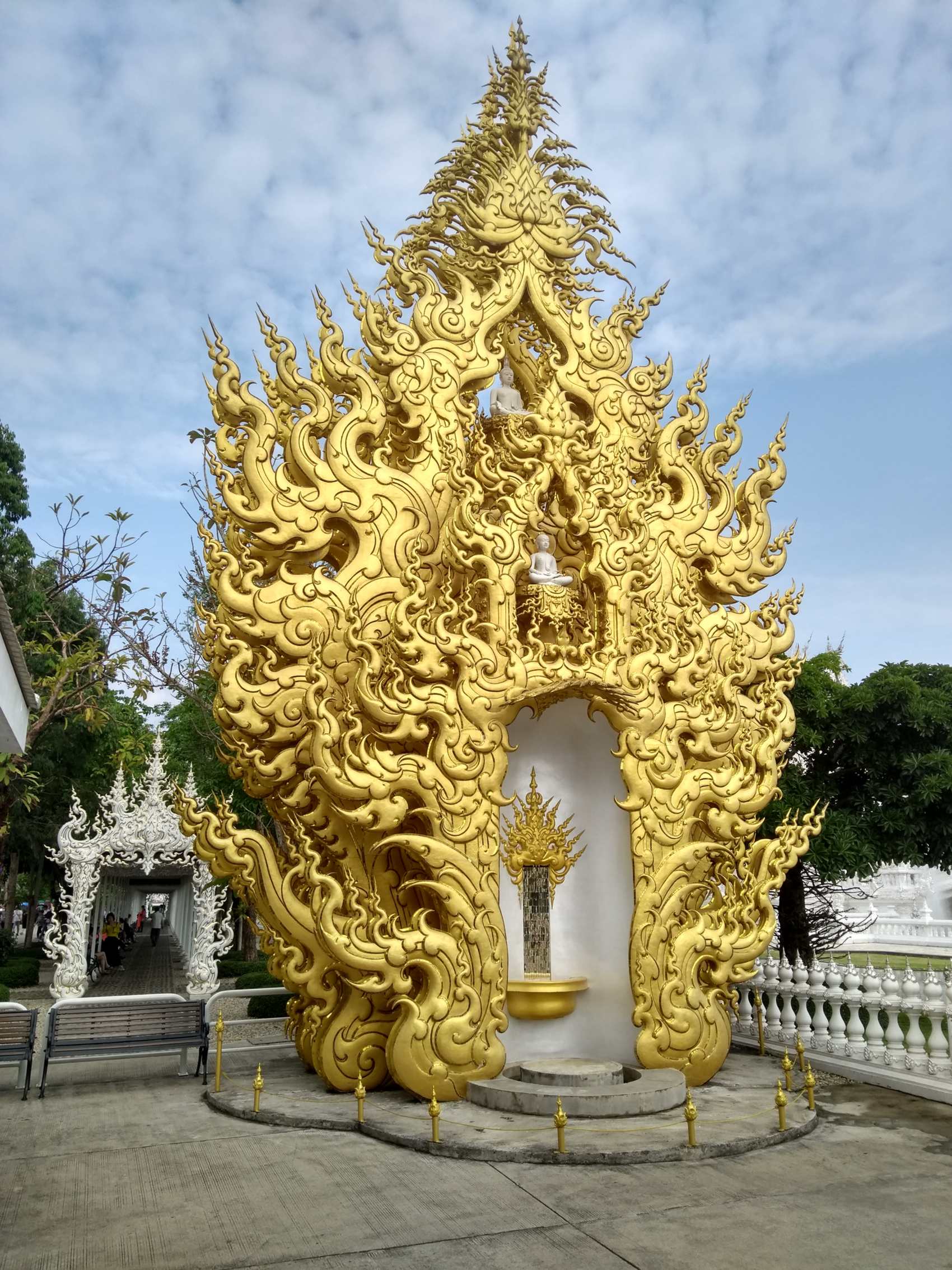 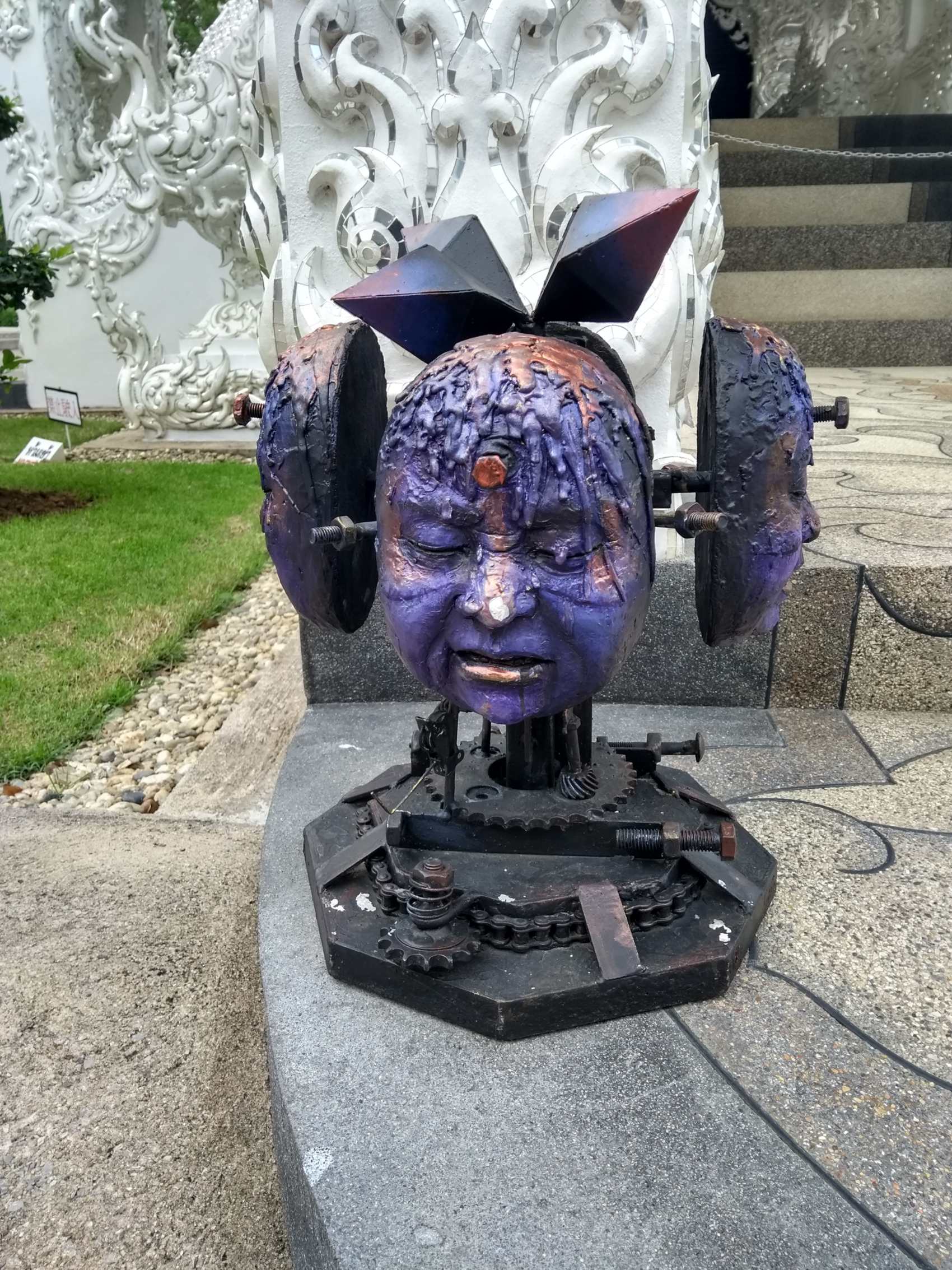 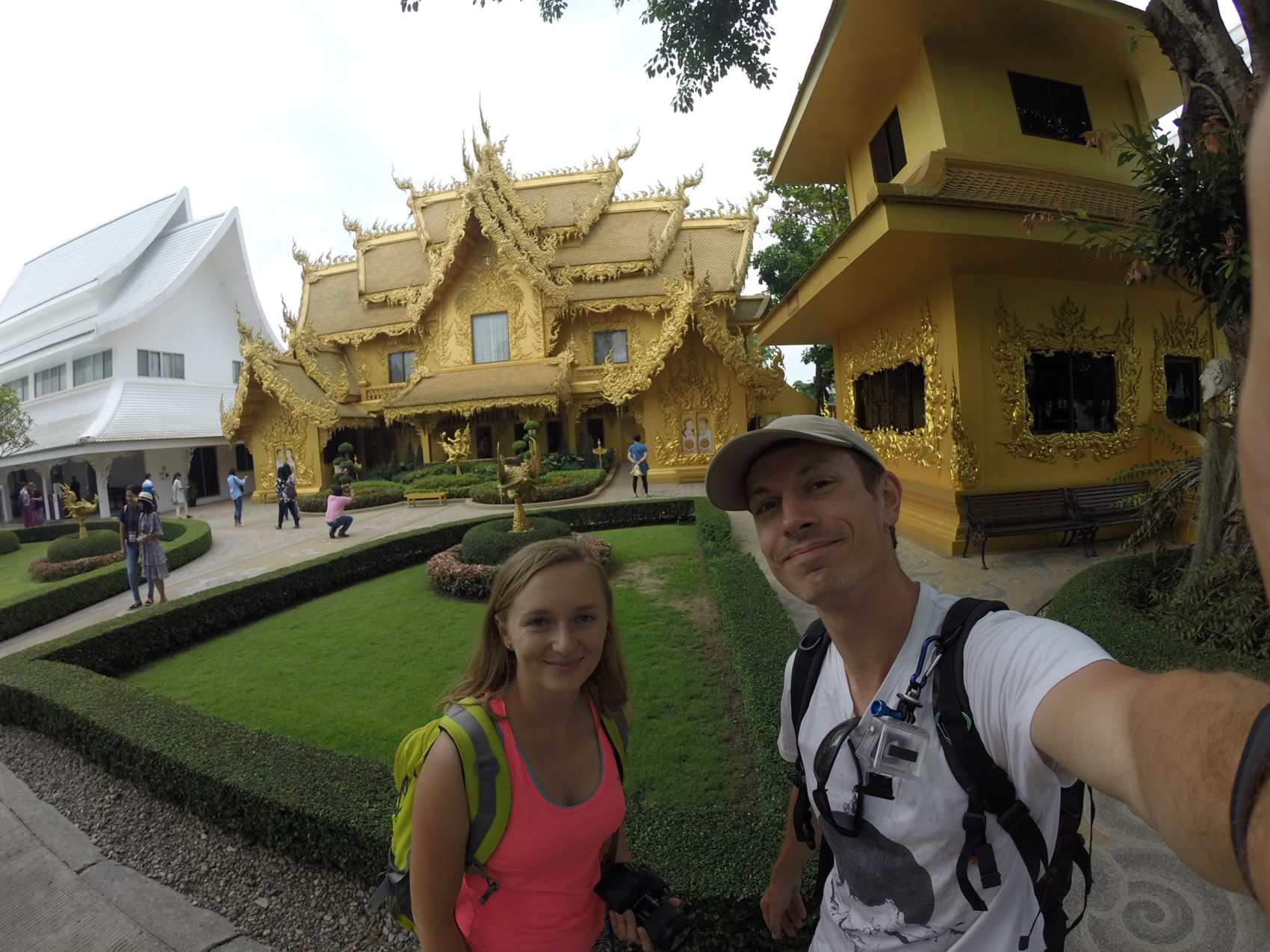 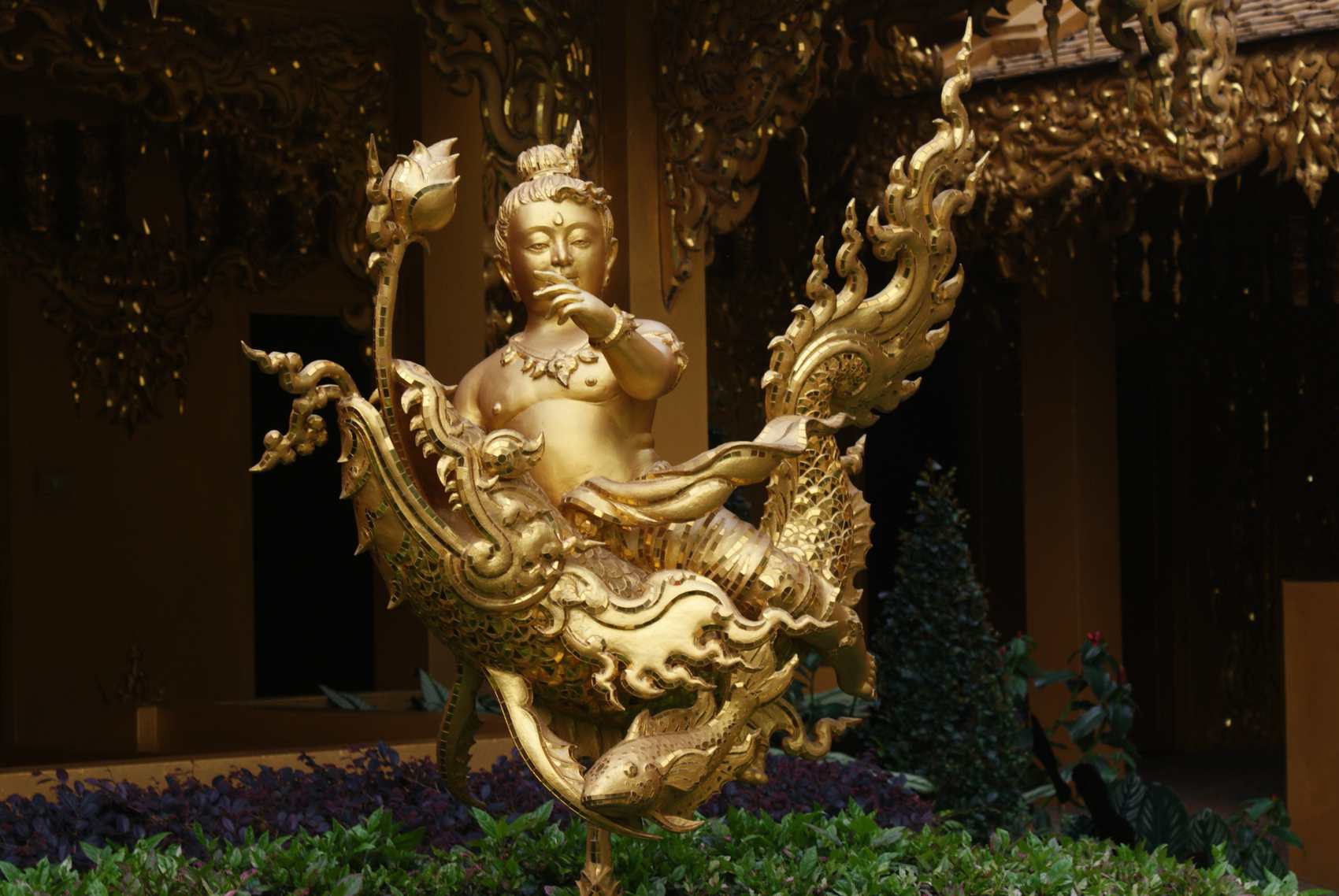 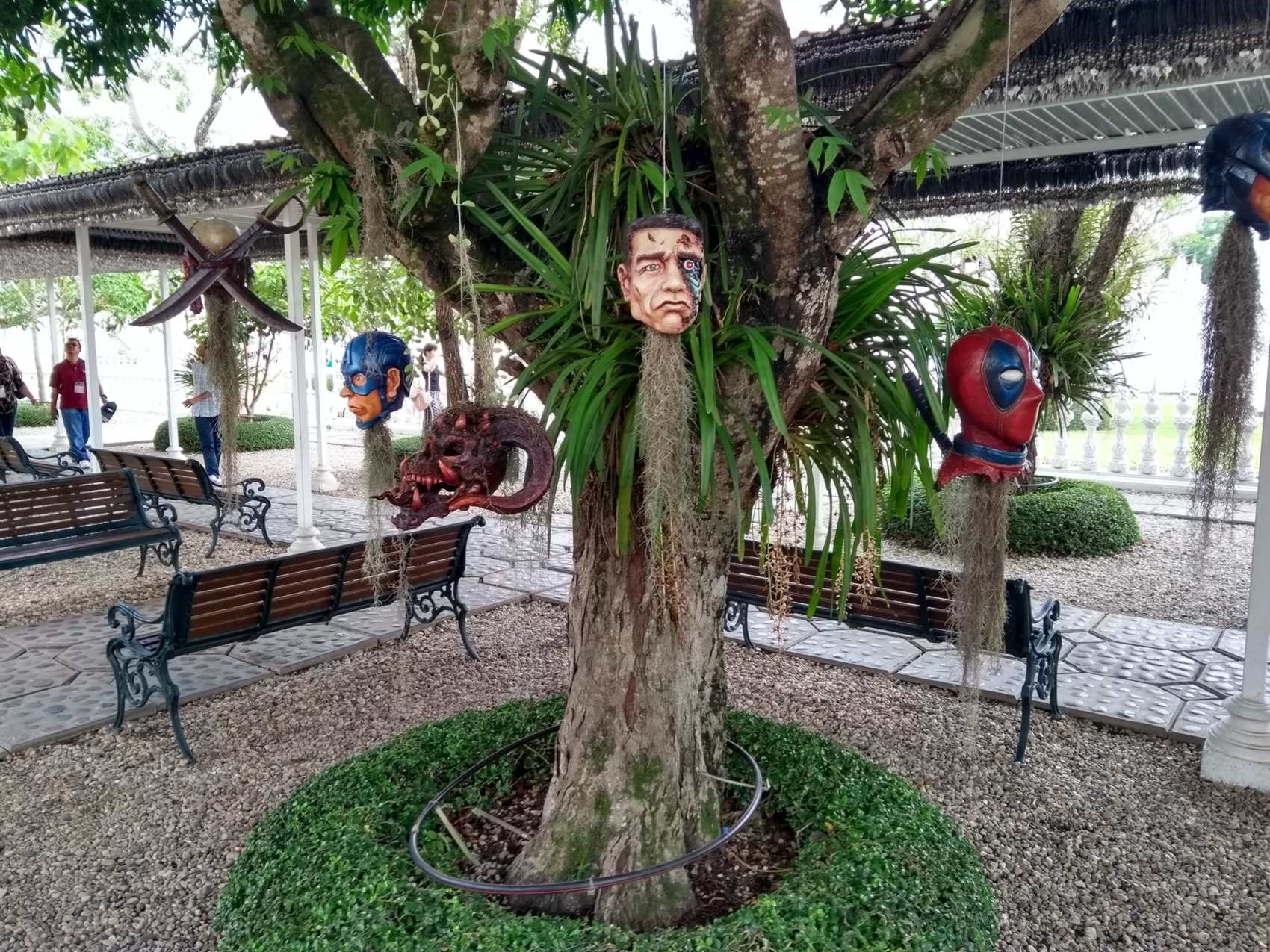 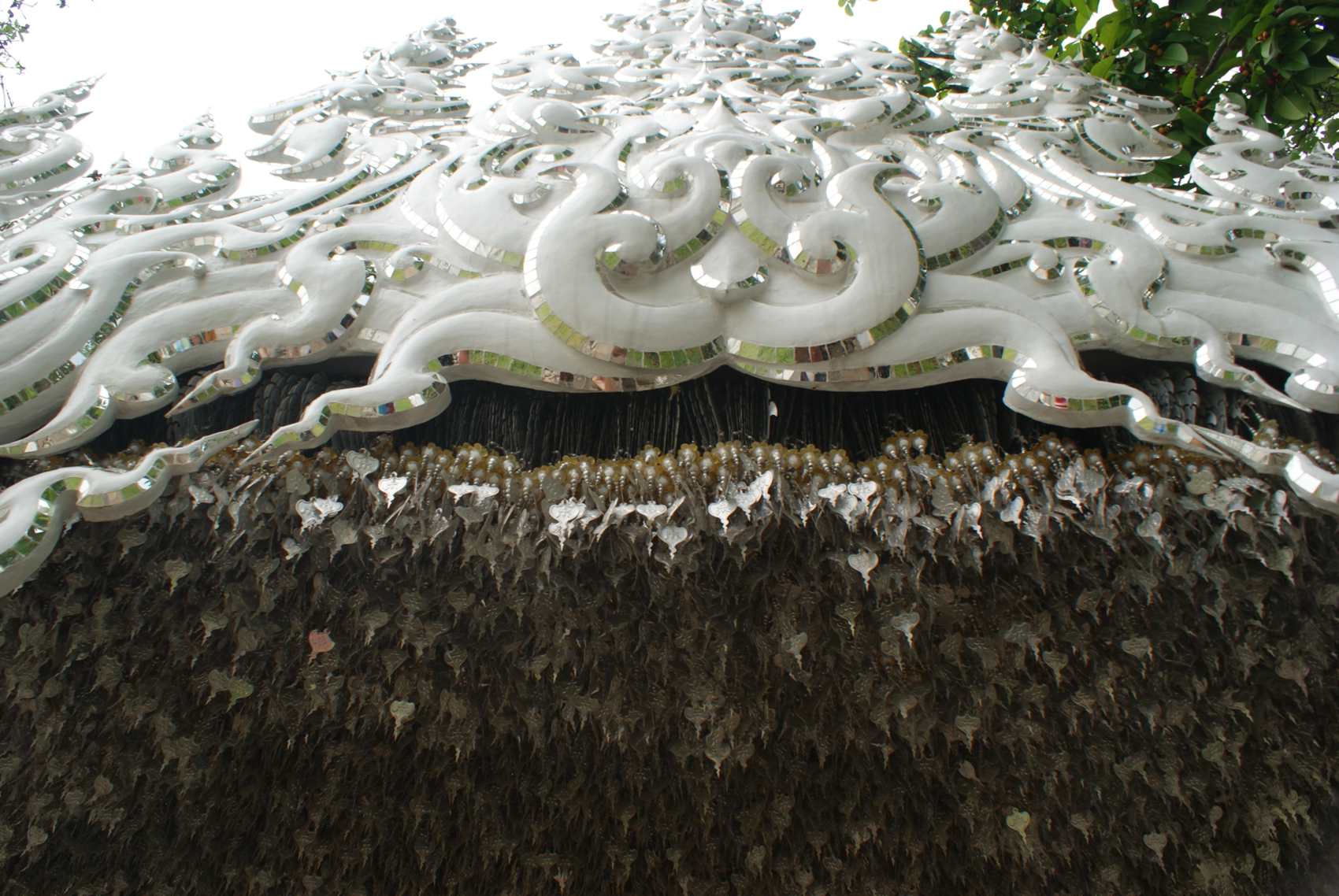 Many tourists were buying metal medallions to write a wish and hang them around the temple, there were already thousands of them, above our heads!

After we got back to the main bus station, we immediately jumped on another bus in the direction of Maesai to visit the Black House, also called the Baandam Museum. The woman selling tickets told us again where we needed to get off and from there it was maybe 800m of walk to reach the place (direction clearly marked with the signs). It’s an open-air museum dedicated to Thawan Duchanee with around 40 buildings. Inside each of them you can find a collection of paintings, sculptures, old furniture but unfortunately a large portion of the collection were skins, horns and animal bones. Thawan Duchanee got his degree in Painting, Monument and Urban Planning, continuing his education in the Netherlands where he got his Ph.D. in Metaphysics. He has acquired fame and praise all over the world, winning many prizes, however for many people (including me) this place would be controversial. 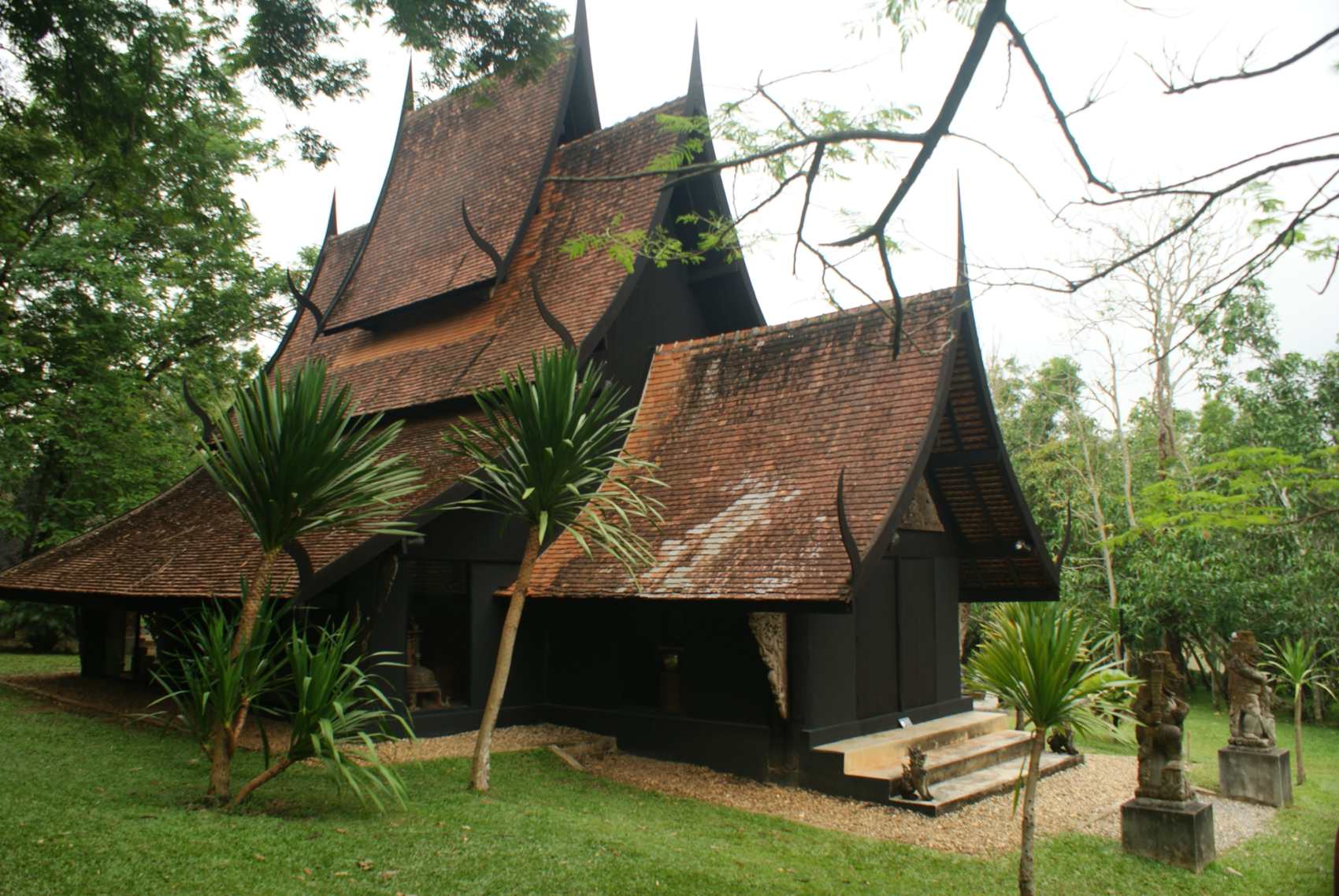 Black houses made of wood, glass, bricks, concrete and terracotta 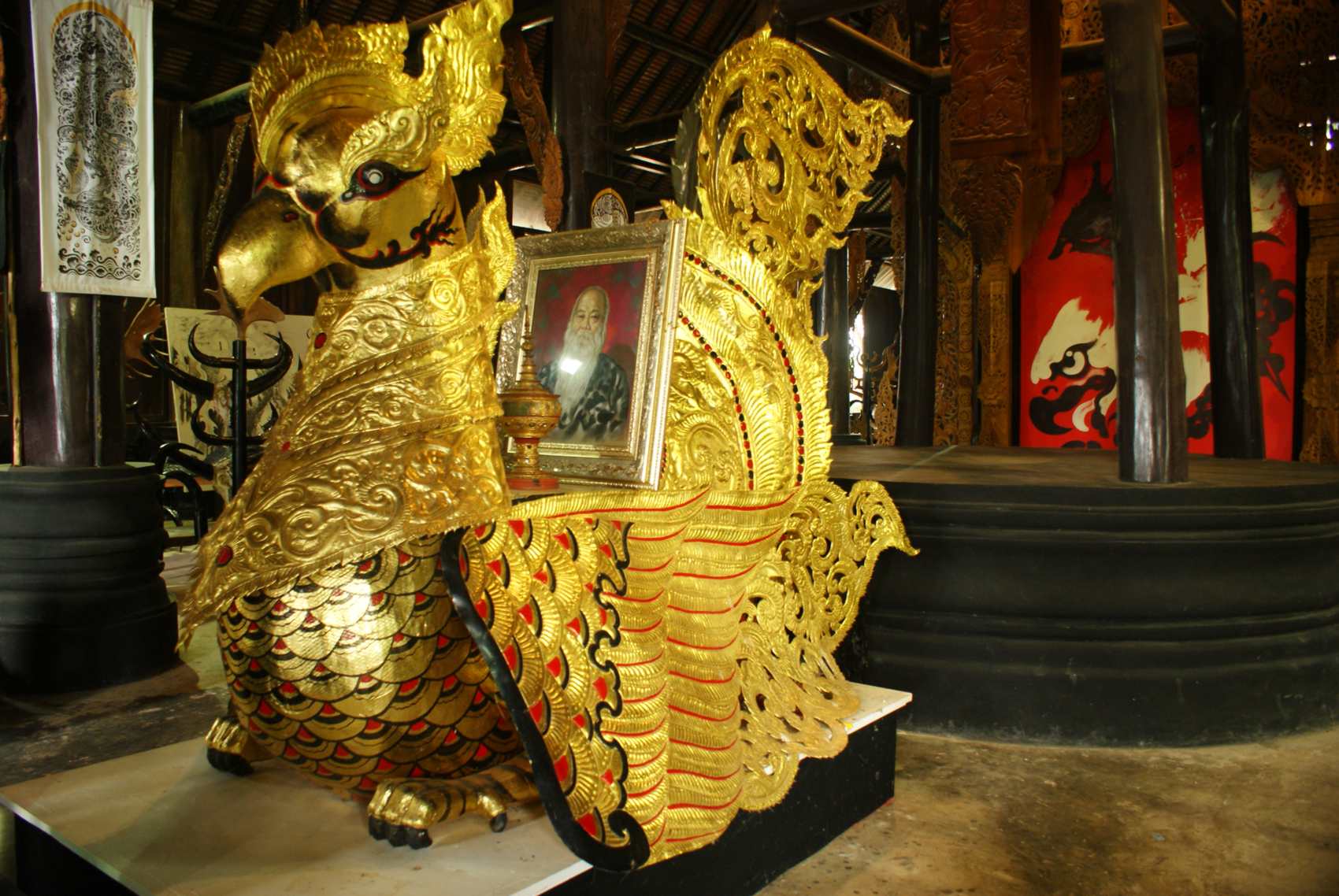 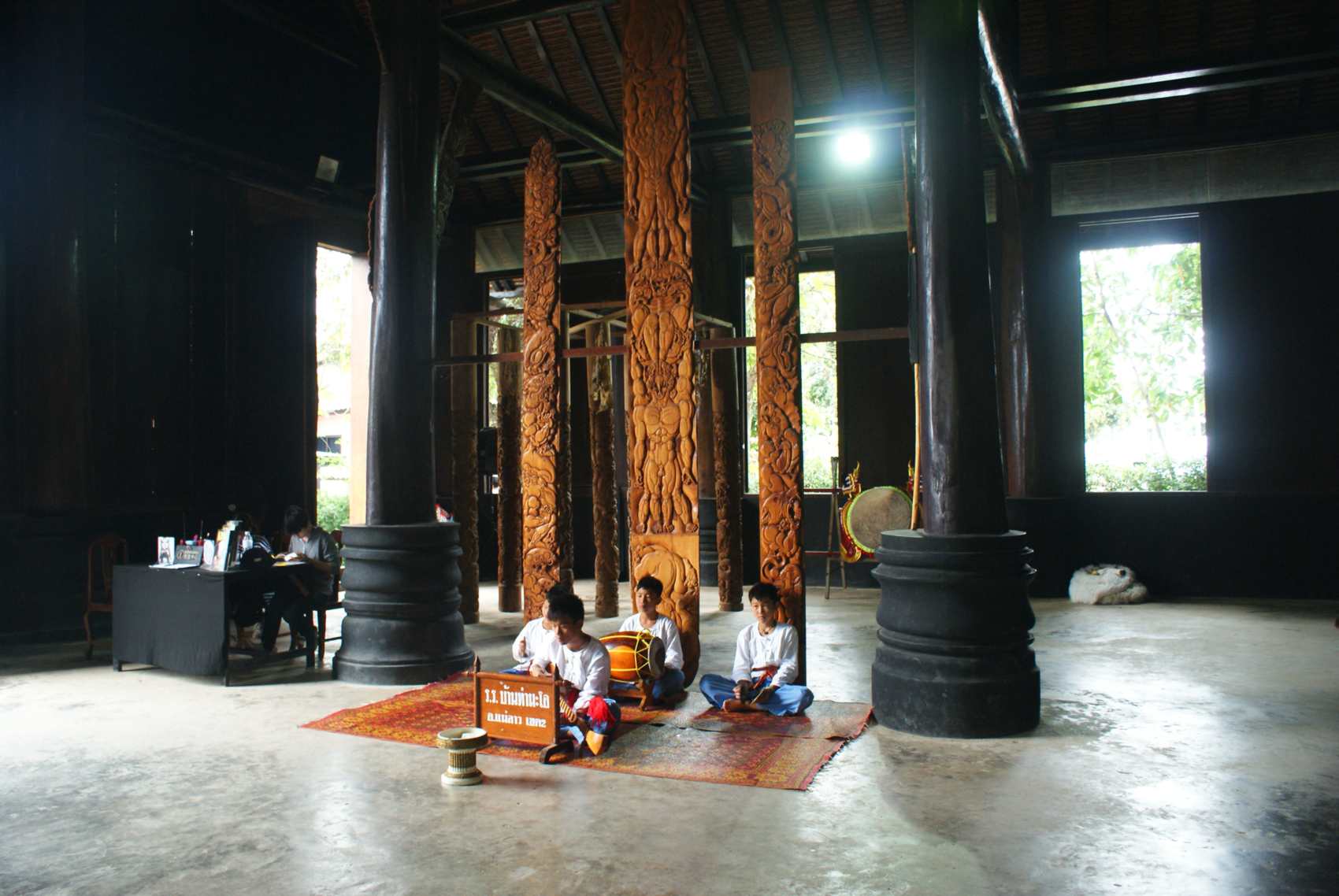 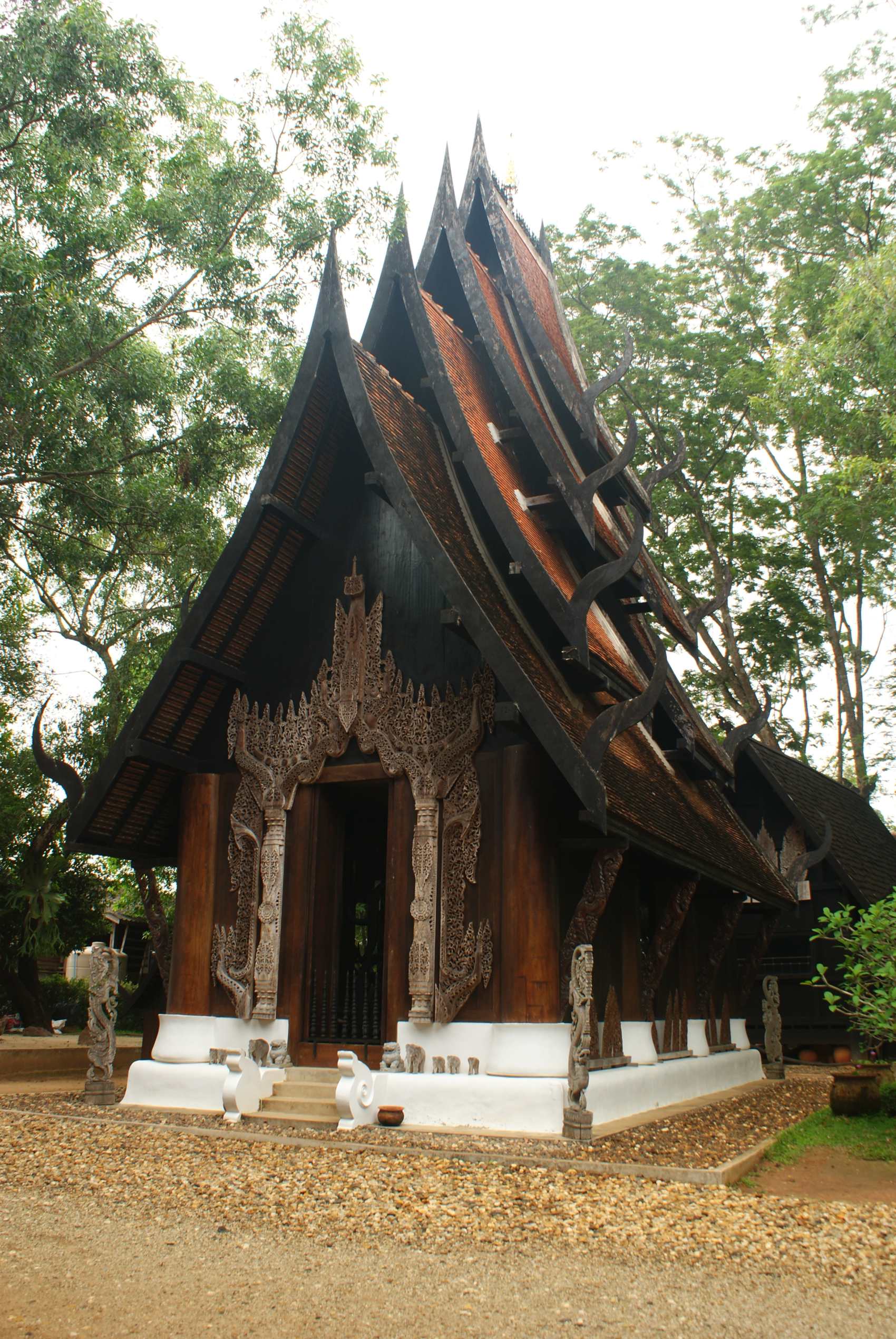 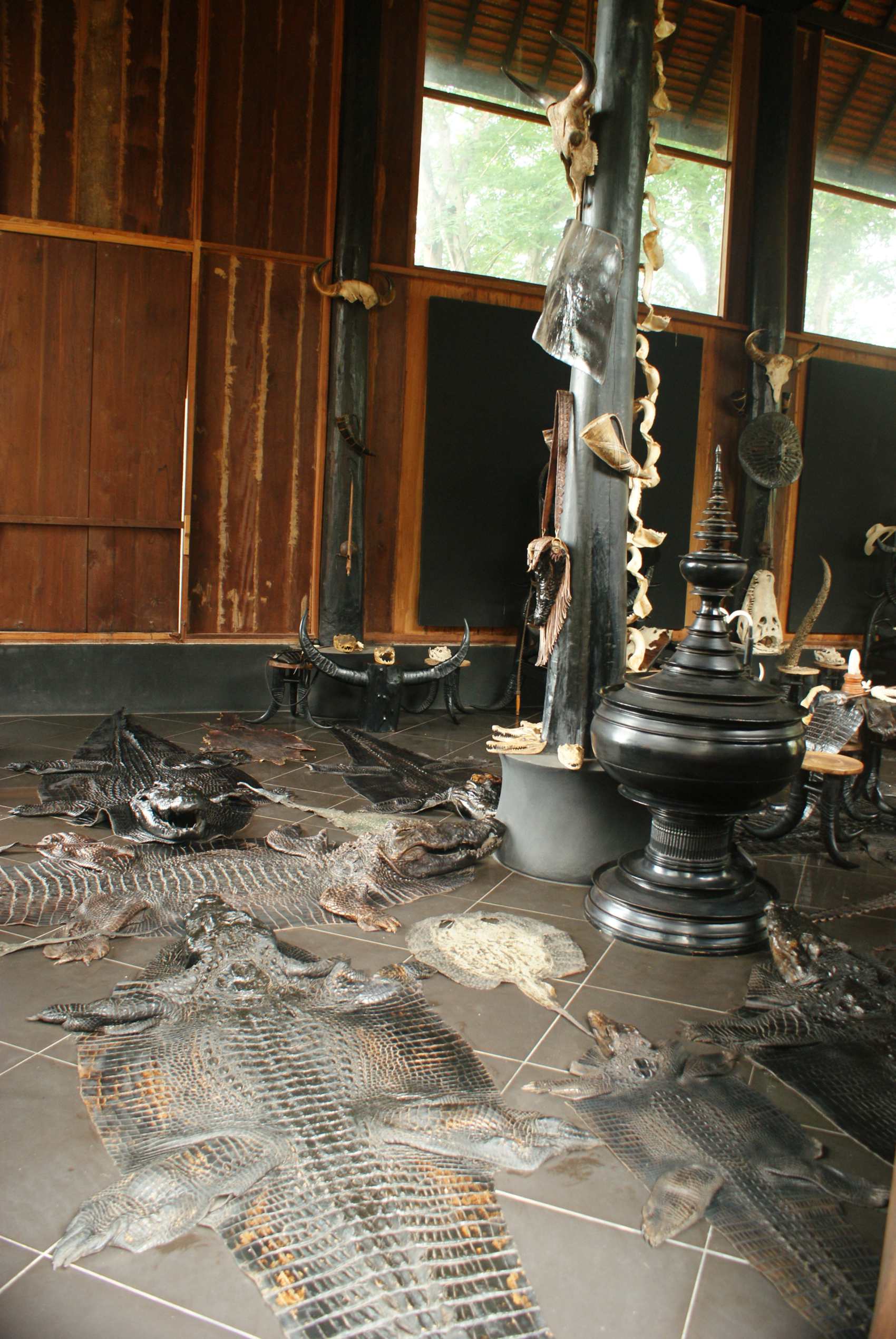 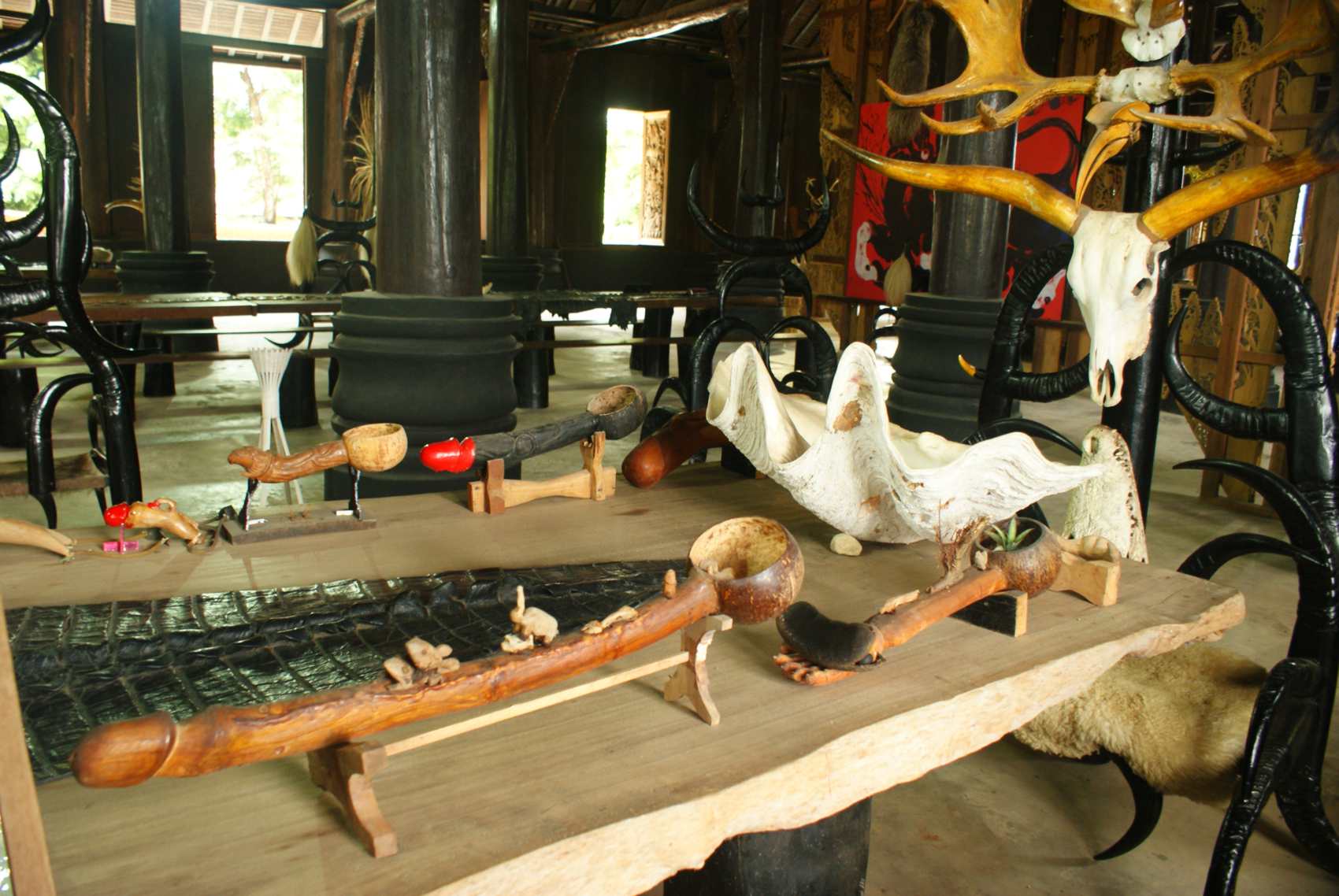 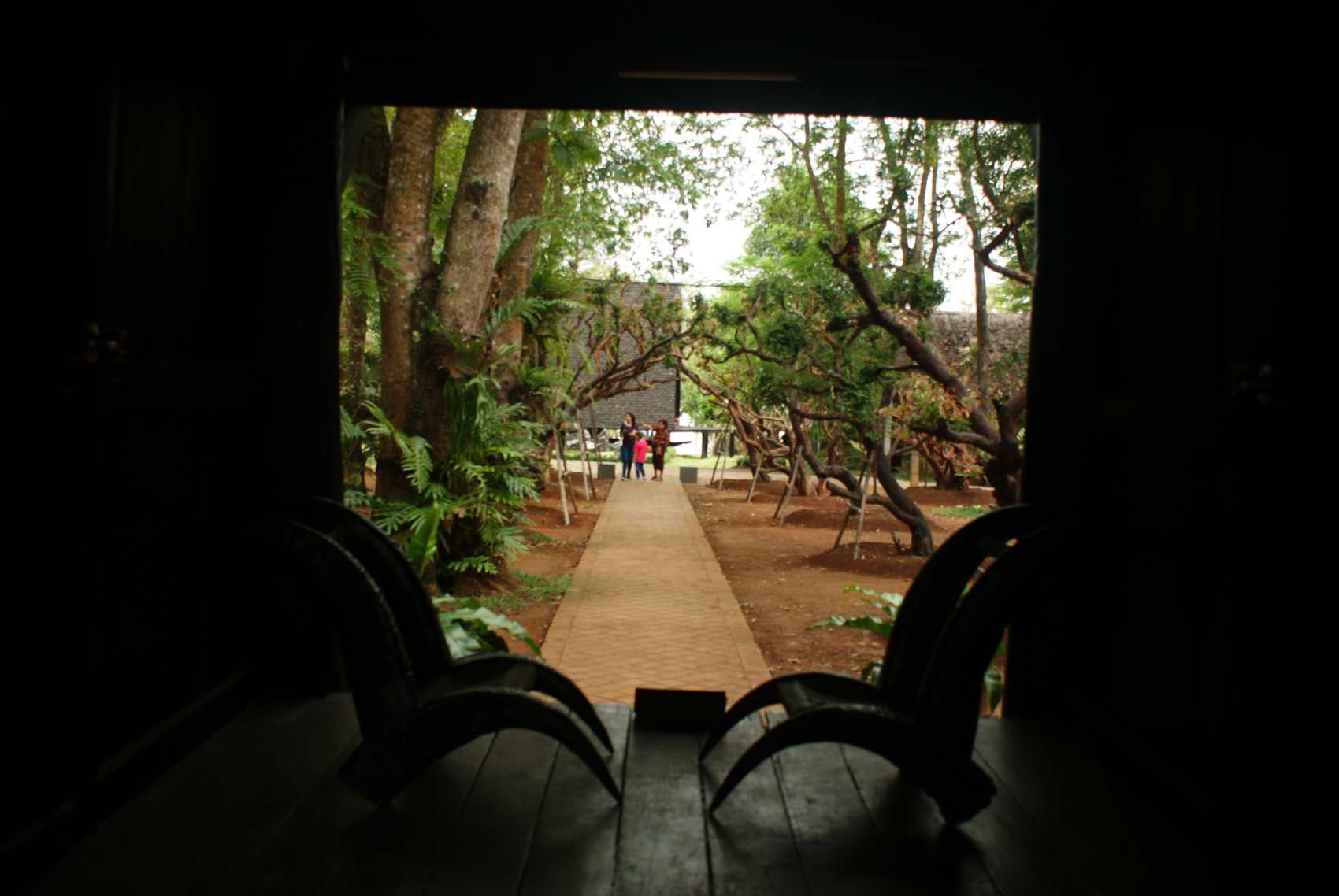 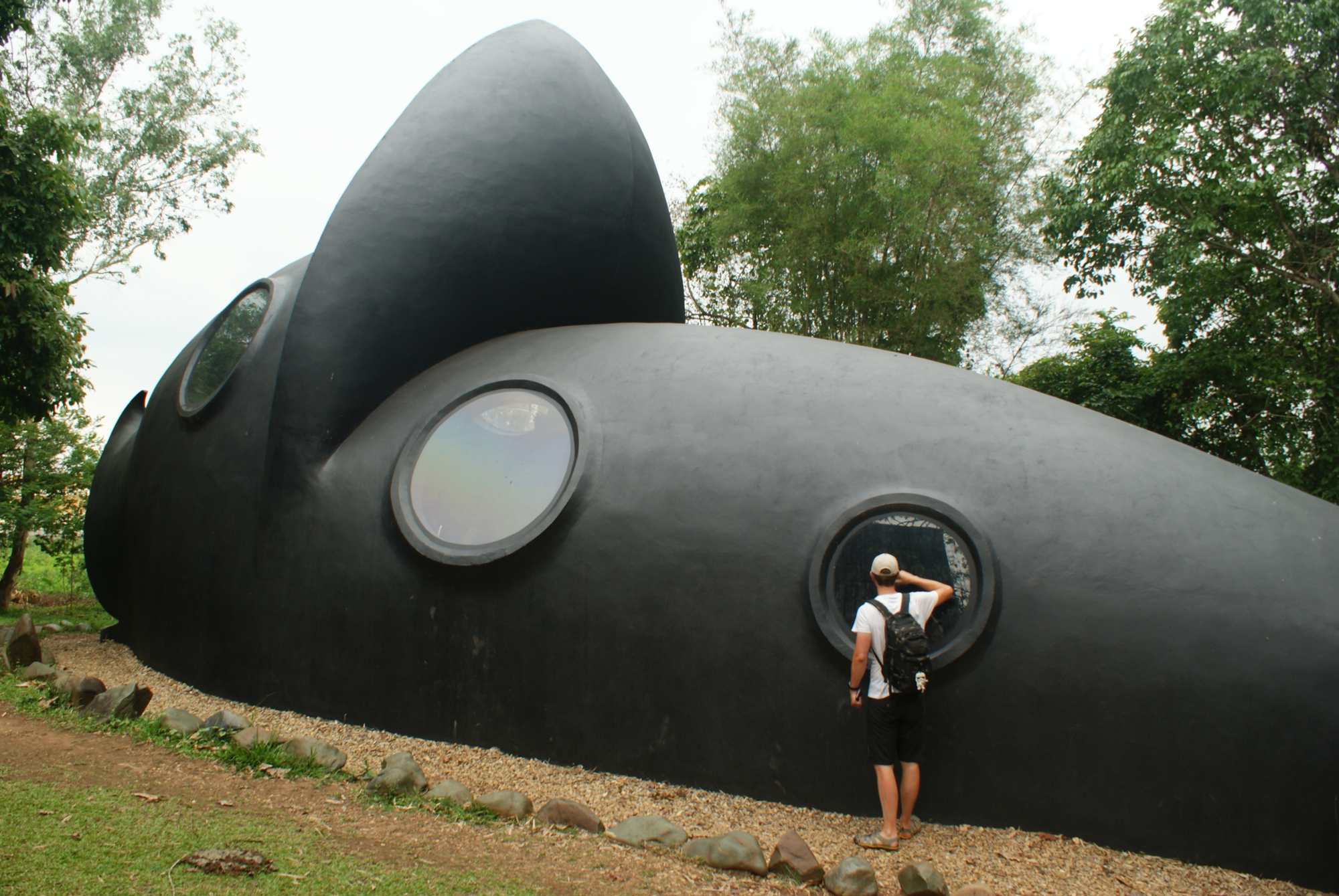 The buildings were very diverse considering their shape, style and colors

Besides many temples in the city center of Chiang Rai, The Golden Clock Tower caught our attention. This Clock was designed by the same artist that designed the White Temple. We were forced to spend the rest of the afternoon in our apartment since it rained heavily. In the evening, we walked again to the night market to grab a delicious smoothie and to look for interesting souvenirs. We also discovered a very tasty, soft type of steamed bun called in Thailand Baozi or bao, filled with meat or taro but my favourite kind was with a sweet, yellow custard filling :) 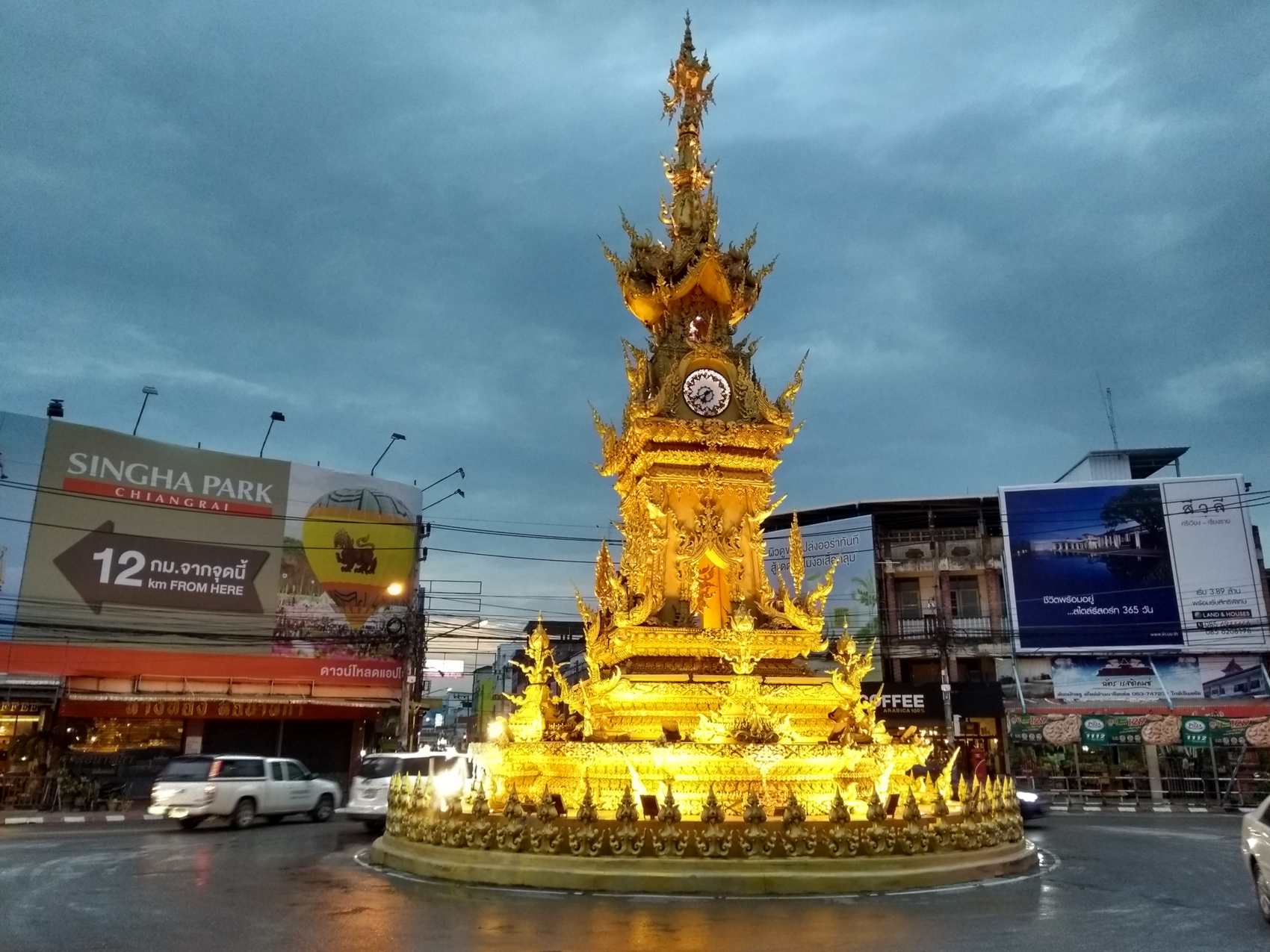 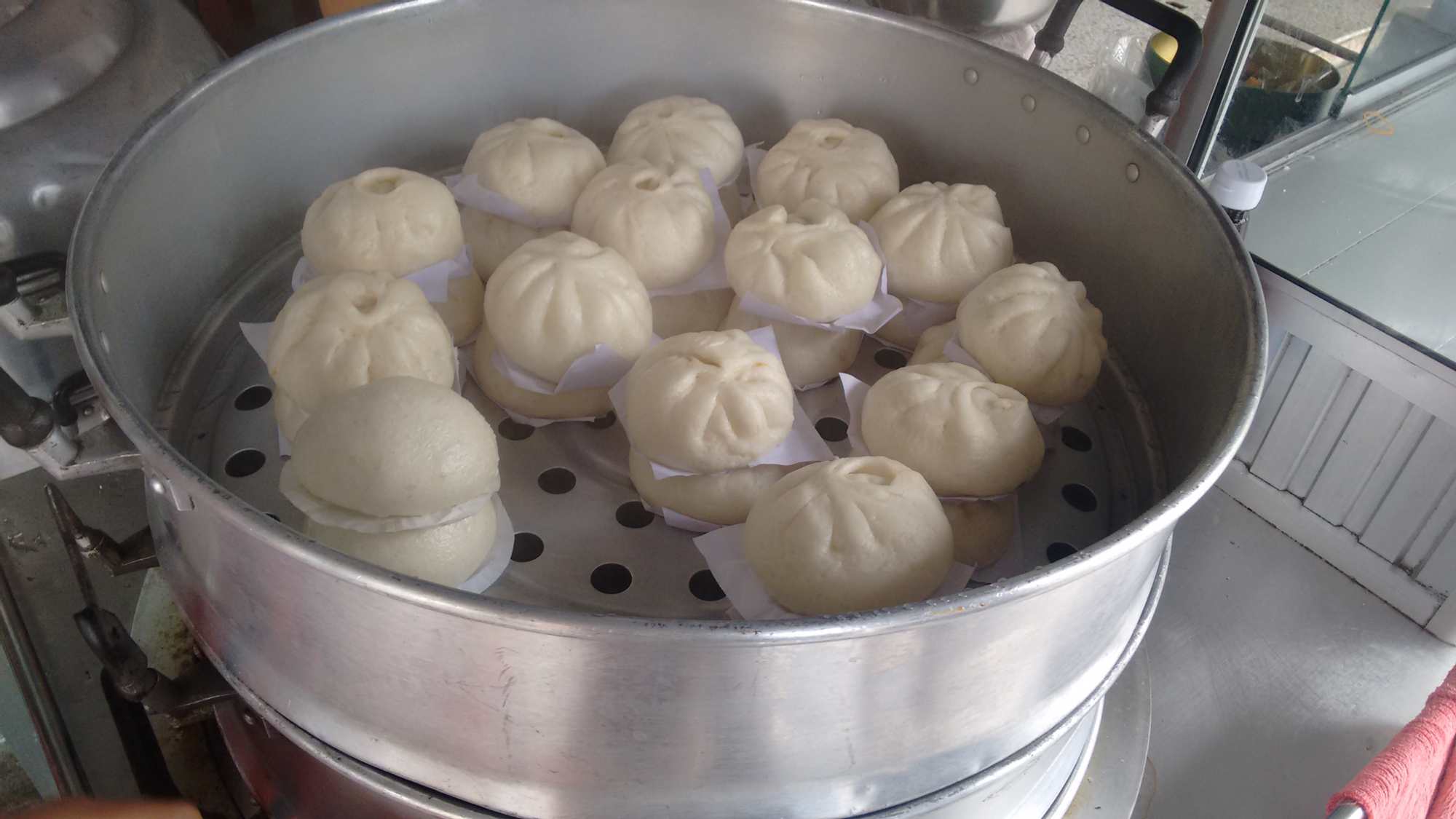 Share:
Previous: Crossing the border with Thailand... Next: A trip to Little Switzerland...