The unique structure of the Singapore zoo is the biggest asset of the park. Animals’ runs are full of plants, surrounded by deep ditch instead of fence, creating the illusion of walking among animals in their natural habitats. In many places monkeys, birds, bats are running and flying freely among the visitors. These lemurs for example welcomed us near the entrance :) 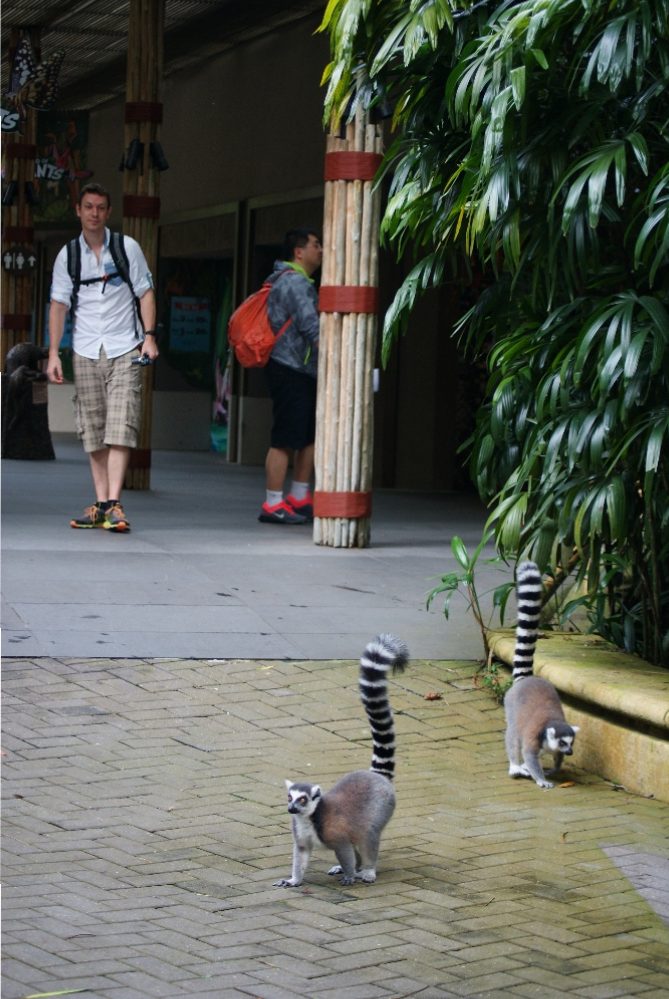 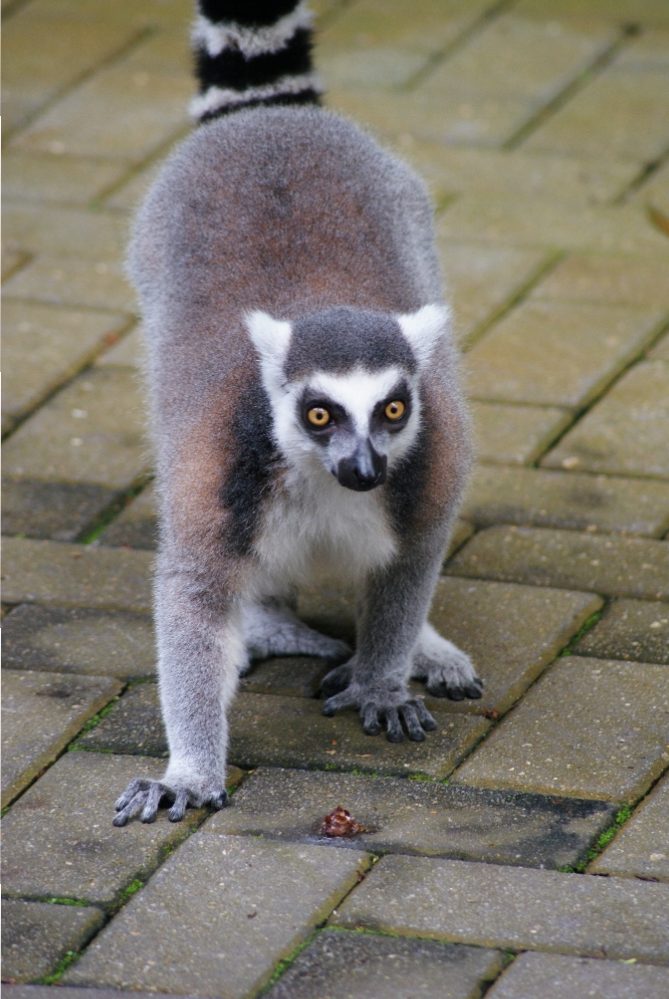 After short walk we noticed gibbons cherfully jumping between tries, using one arm, keeping themselves upside down for a long time and being really curious about a monitor lizard walking on a grass below them :p Additionally, there were many monkeys I have never seen before, just look at the cute one next to the gibbon :) 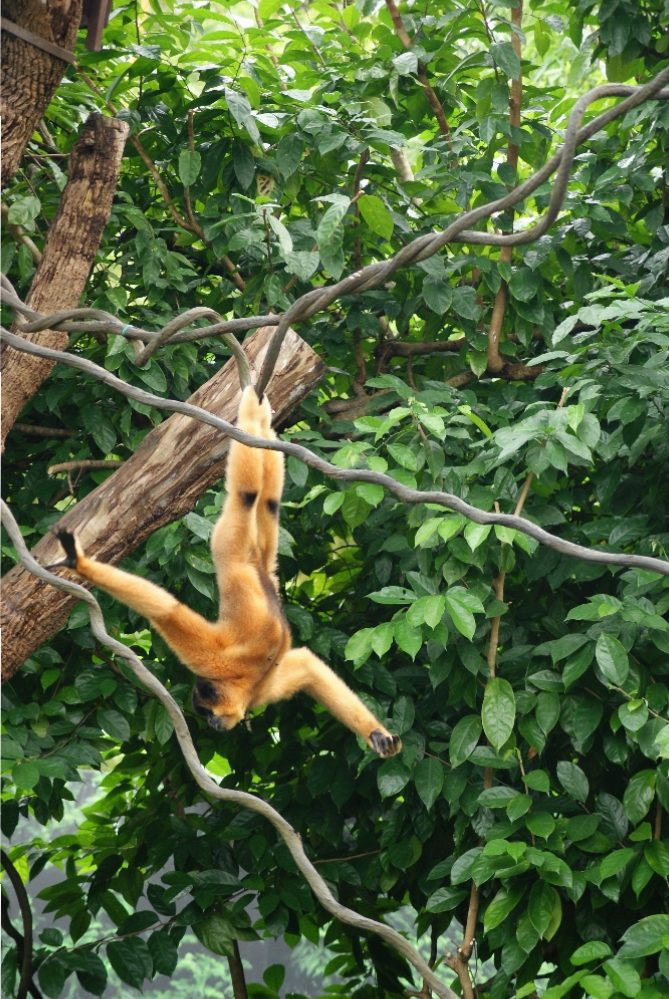 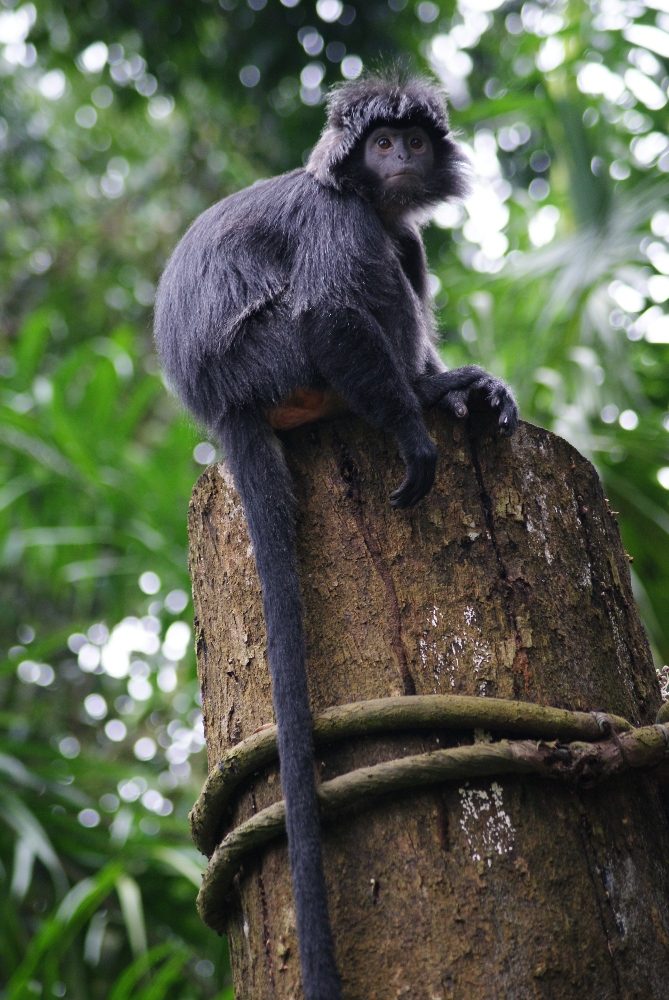 We were even more delighted with the free ranging orangutan island and boardwalk around it. There, we could observe female orangutan with her offspring just above our heads, tightly holding the fur of his mum and having breakfast at the same time (I’m assuming the orangutans never fall, right? ;) 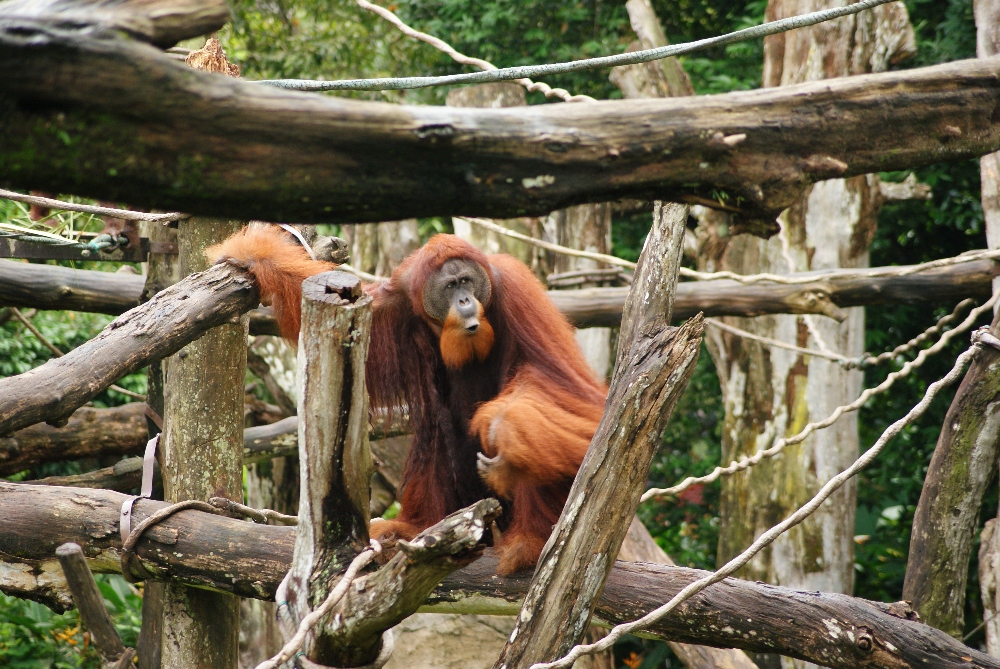 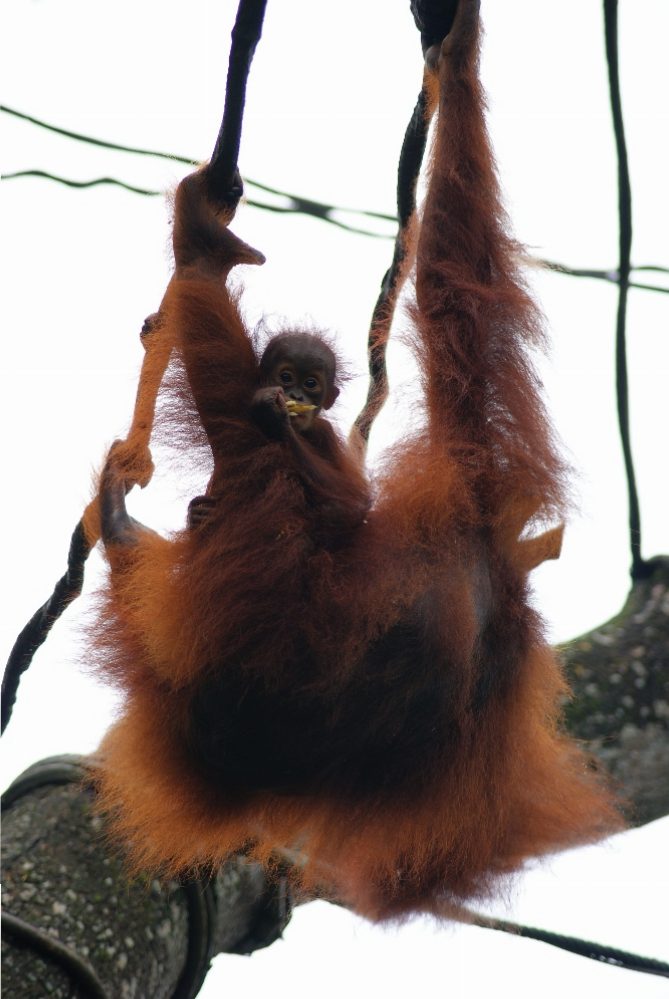 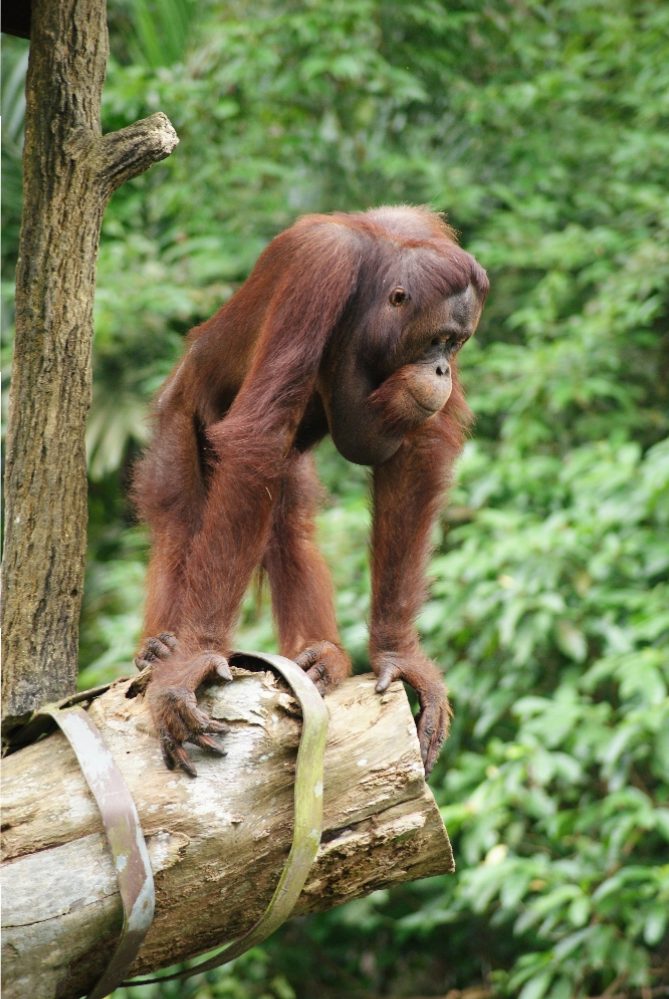 Next, we attended the “Splash Safari” show with California sea lion in a main role. To welcome the audience properly, the sea lion splashed water on a first two rows full of kids who were delighted about it :D We kept a safe distance :p While seemingly sluggish, this 200kg-heavy animal could balance himself on the foreflippers, catch flying discs, jump out of the water and touch a ball. It turned out to be very agile sea lion! It was very interesting show which lasted 15 minutes :)

During another show “Elephants at work and play” three of the zoo’s Asian Elephants were introduced along with their keepers, called Mahouts. They demonstrated their power by pushing giant logs from the water but also showed us how gentle they can be by picking up a coin with the tip of their long trunks or putting a hat back on the keeper’s head :) Elephants made us laugh when they were stealing food from keepers’ pockets or pretending to go sleep (creatively using soft branches as a pillow) :p There was a token feeding session at the end of a show, where a limited number of food baskets could be purchased and fed to the animals by visitors :D 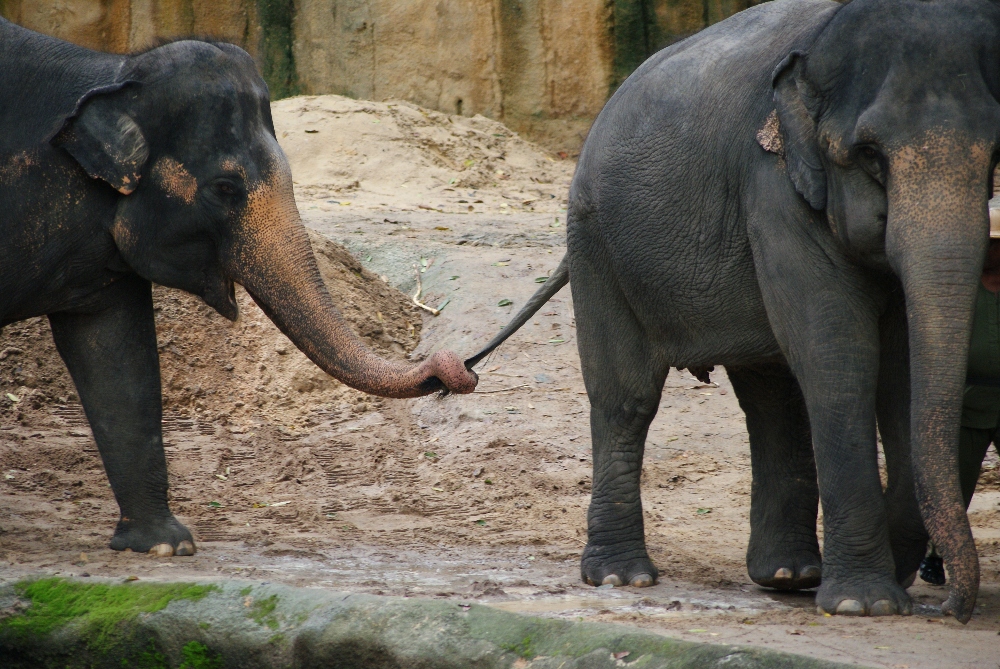 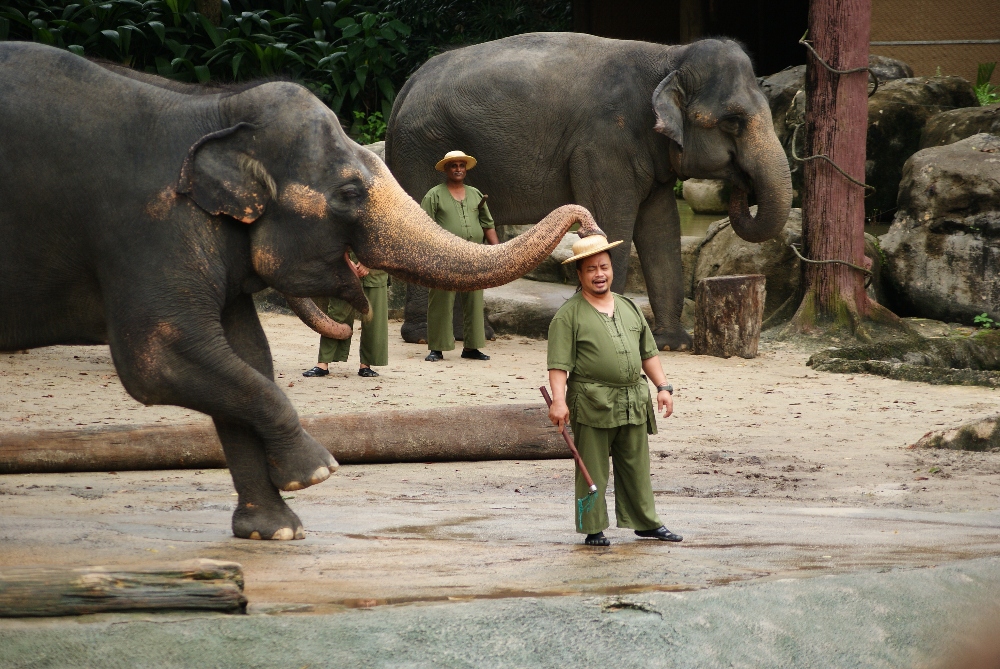 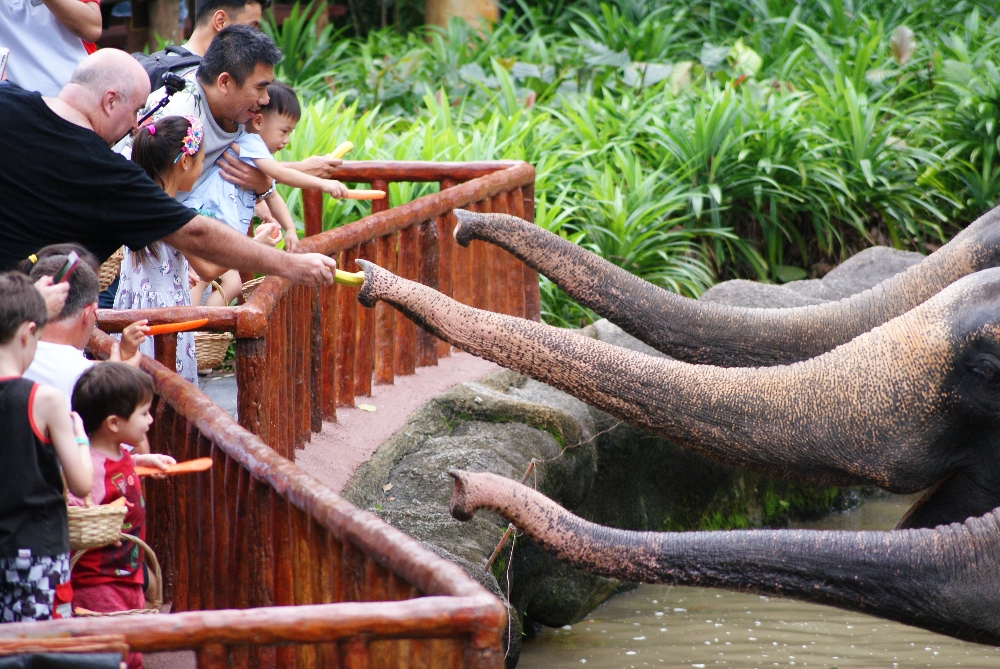 RepTopia, part of the Zoo dedicated to reptiles and amphibians was a nice surprise for us. We could see there huge lizards, tiny frogs and chameleon during his feeding session ;p 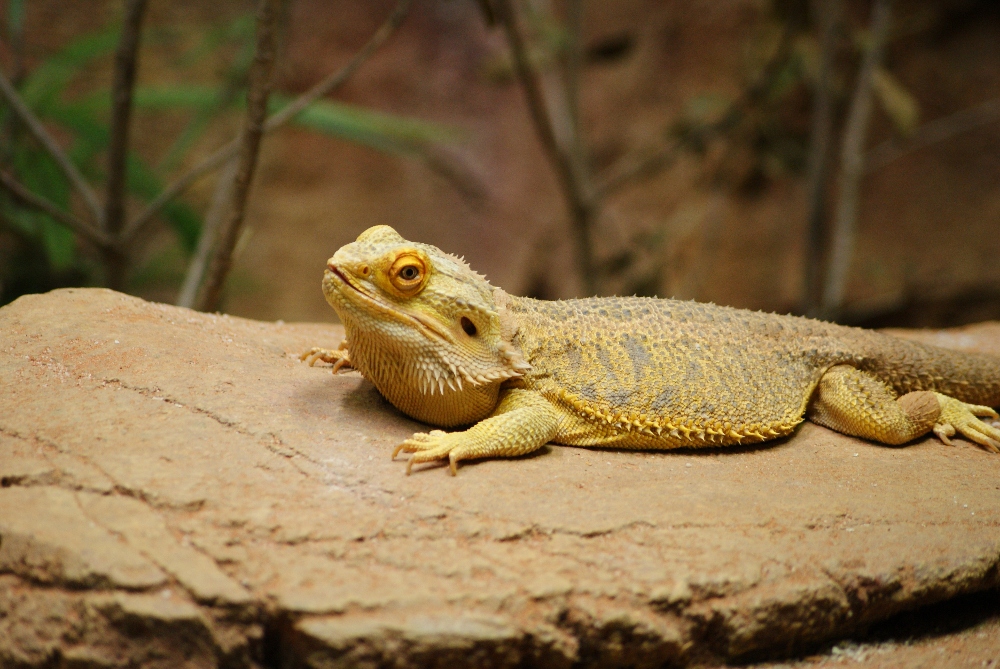 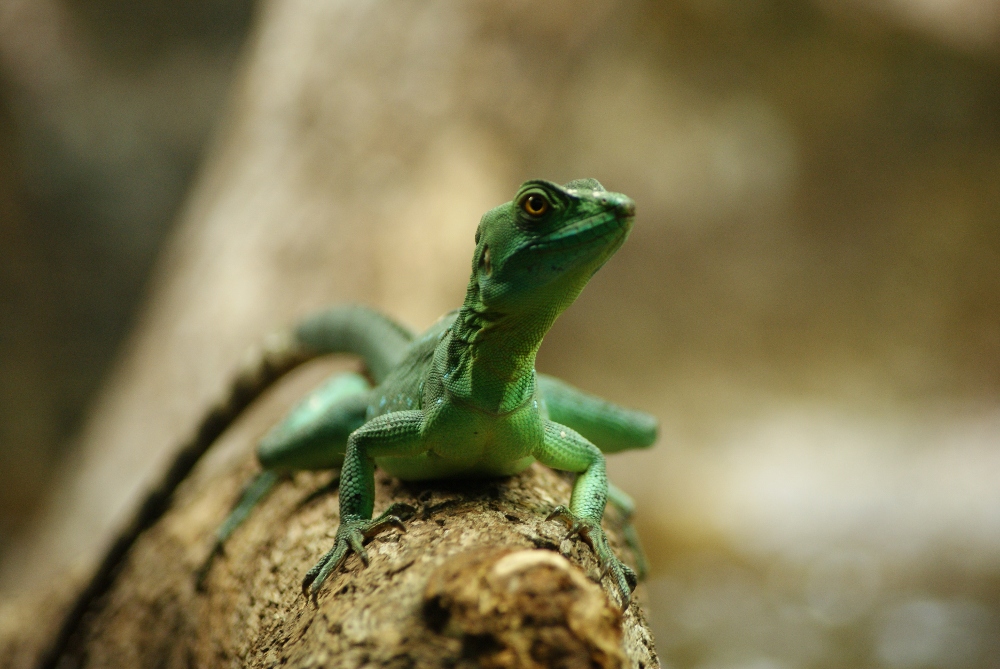 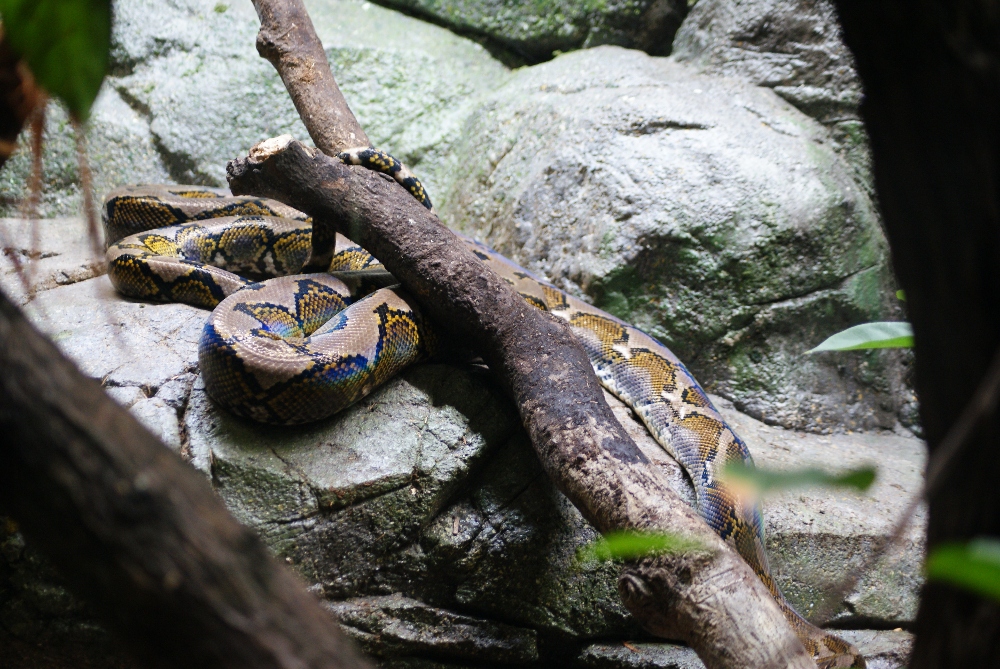 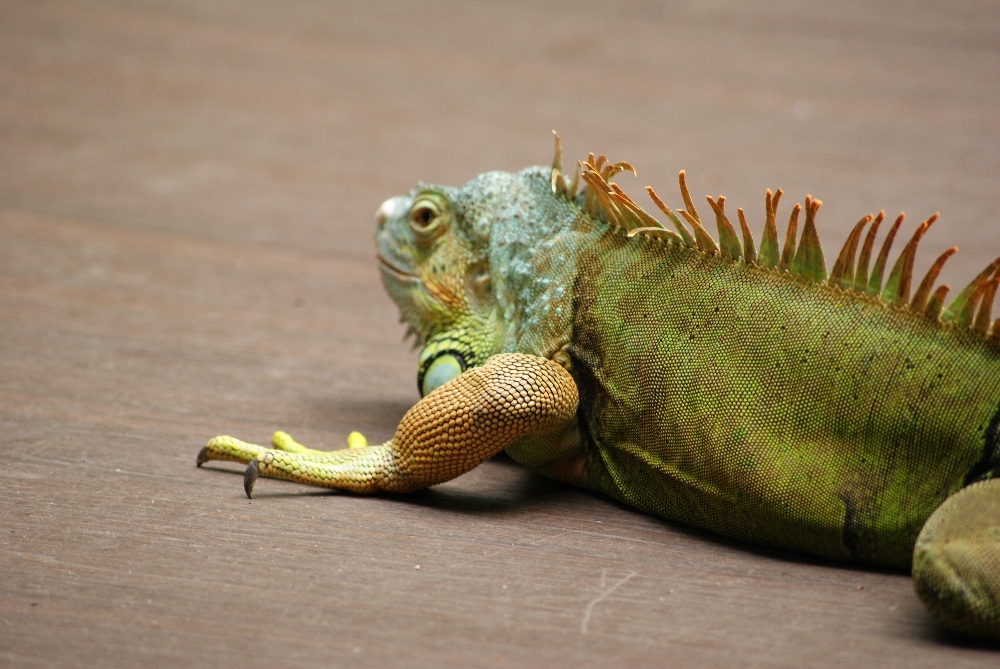 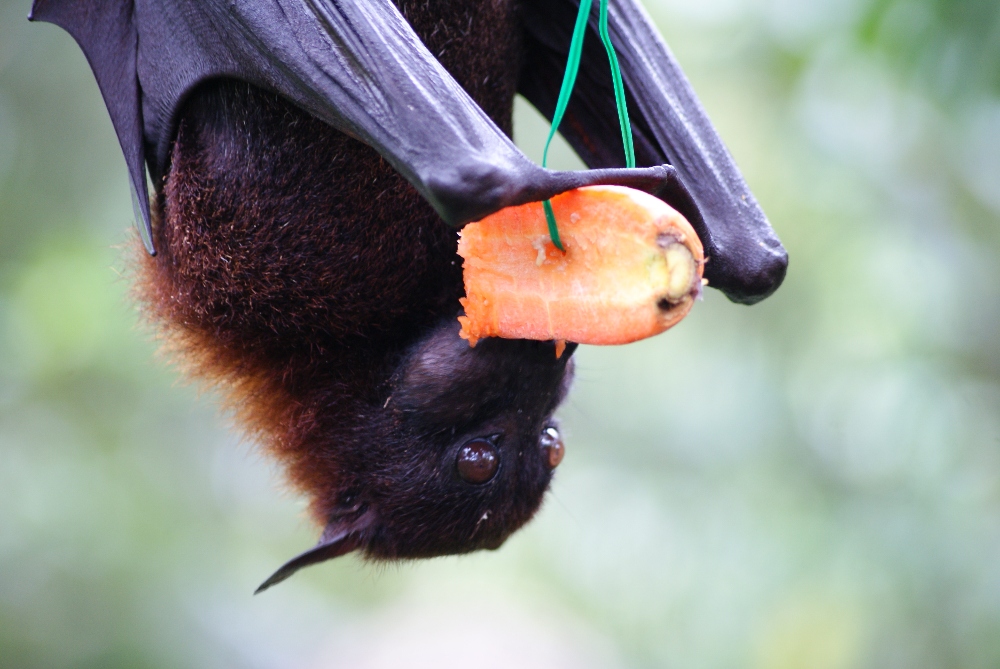 To visit Night Safari park you need to book a specific day and time of your admission (the earliest possible is 7.15pm). After queuing to enter the park and later in front of the amphitheatre, finally we got seated and The Creatures of the Night Show began. Otters, binturongs, hyena, owls and huge boa were the highlights of this 20 min show. The commentary was entertaining and informative, however performances in other parks impressed me way more. 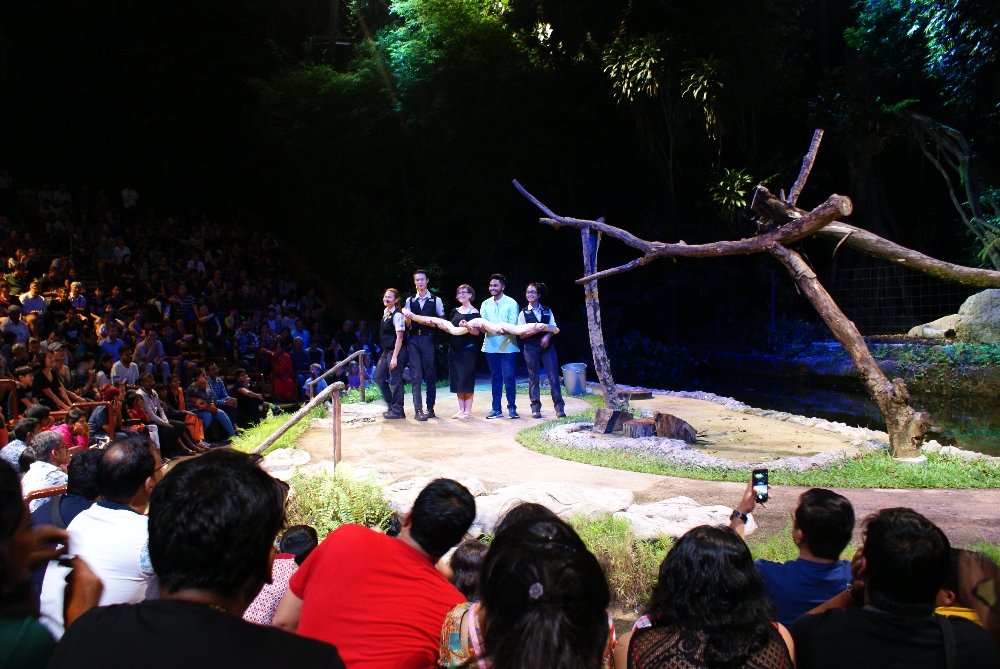 Next, we explored the park on foot and by open-sided tram. There are 4 walking trails to choose, all combined make a big loop around the park (a lot of visitors skipped these, only joining the tram ride. A huge mistake, walking around a zoo at night was exhilarating!). You need to be very patient, look carefully around, because even small movement of the leaves or rustle means an animal might be approaching :) The more interesting animals we managed to spot: porcupines, tarsier, pangolin, striped hyena and parma wallaby. We were lucky to meet the keeper of wallabies and had a chat with her about two young kangaroos sitting next to her. She was teaching the young animals to bob a ball on a stick with their nose. While they did so, she had a chance to inspect the animals. Adult males get aggressive during mating season and inflict wound on each other. This allows her to spot these wounds and take appropriate action. It also enables her to check to pouch of females for babies.

During the tram ride (around 30-40min) we passed 6 different geographical regions showing animals characteristic for each of them. The English commentary was really helpful, providing information about animals as we passed them. I was the most impressed by the giant Asian Elephant, White African Lions and Greater Asian Rhinoceros. Worth to add that in some parts, animals such as deers were running freely in very close proximity from the tram, no fences at all, unforgettable experience!

All in all, I truly recommend you to visit all 4 parks, they are all amazing. It can be exhausting to do in 1.5 day as we did but it’s definitely worth it. Take snacks, stay hydrated and join the shows which showcase great commitment between animals and human :D Though if you have less time and can only pick one, I would go for Jurong Bird Park as it hosted a large number of species I haven’t seen elsewhere. Sebastian however liked walking through the zoo at night best, his top-pick is the Night Safari.