The cover of National Geographic which I saw 10 years ago and the article inside caused me to dream about discovering the Khmer Empire. It felt so unreal back then and fortunately some dreams come true earlier than you would expect. There I was, standing in front of Angkor Enterprise in disbelief with a 3-day Angkor-Pass in my hands :-D 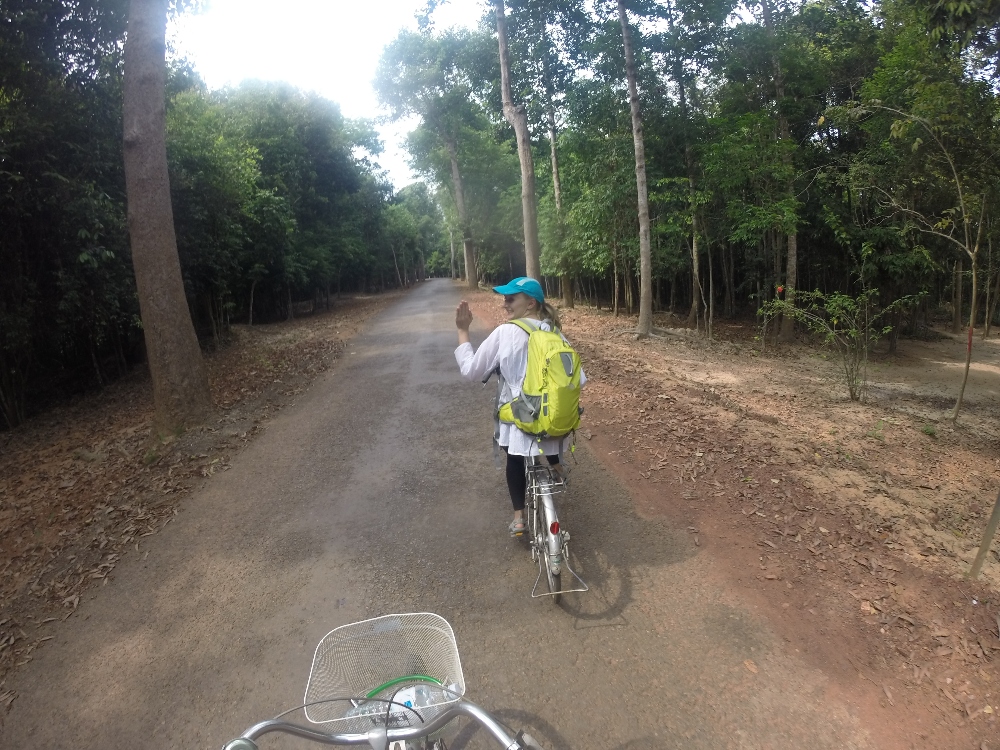 Let the adventure begin! A big bottle of water in the bike basket was essential while visiting this archaeological park

The Khmer Empire reigned over a huge area of South-East Asia; spanning from Myanmar in the west to Vietnam in the east between the IX and XV century. Angkor is the biggest known complex of buildings before the industrial revolution (the area of current-day Paris!). There are many theories why the empire collapsed at the end of XV century. It could have happened due to domestic conflicts or incursion of armies from neighboring countries, though the more recent opinion from researchers is that changes in the local climate forced the population to other areas. They discovered an advanced system which helped people to collect and store water over the changing seasons. Due to severe drought, followed by intense flooding, the ancient Khmer population lost control of their water management and agriculture suffered significantly.

On the first day we cycled a 40 km loop (you’ll find this on the map under grand circuit) on rather old, rusty bikes rented from our hotel. The area is very flat and distances between different temples are pleasant to do on a bike. You can enjoy the rural landscape and stop wherever you want, though the extreme heat makes cycling very intense (protection against the sun is very important!). Unfortunately, at one point my extremely old tire burst, and the tube exploded, … so we had to wait over 1.5 hour to get another bike from the hotel. Again, we experienced great hospitality in Cambodia, a waitress from the restaurant immediately offered me her personal cell-phone to call for help (It’s easier and way cheaper to make a local phone call). Next time we rented a bike, we always checked tires for cracks in the rubber (a sign they are old and worn, prone to blow-out) more carefully.

The grand circuit, passes many amazing sites but note that the main attractions are part of the petit circuit (the small circuit), which we did the second day. We entered the archaeological park through ticket check point (north from the ticket office) and started a grand tour counterclockwise. Our first stop was at the small Kravan Temple, then Banteay Kdei (walk to Srah Srang to see the beautiful lakeside), Pre Rup, East Mebon, Ta Som, Neak Pean, Krol Ko (small but no one was there!) and finally Preah Khan (very big, interesting bridge leading to the entrance). On the way back we caught a glimpse of the world-famous temples: Bayon and Angkor Wat :) 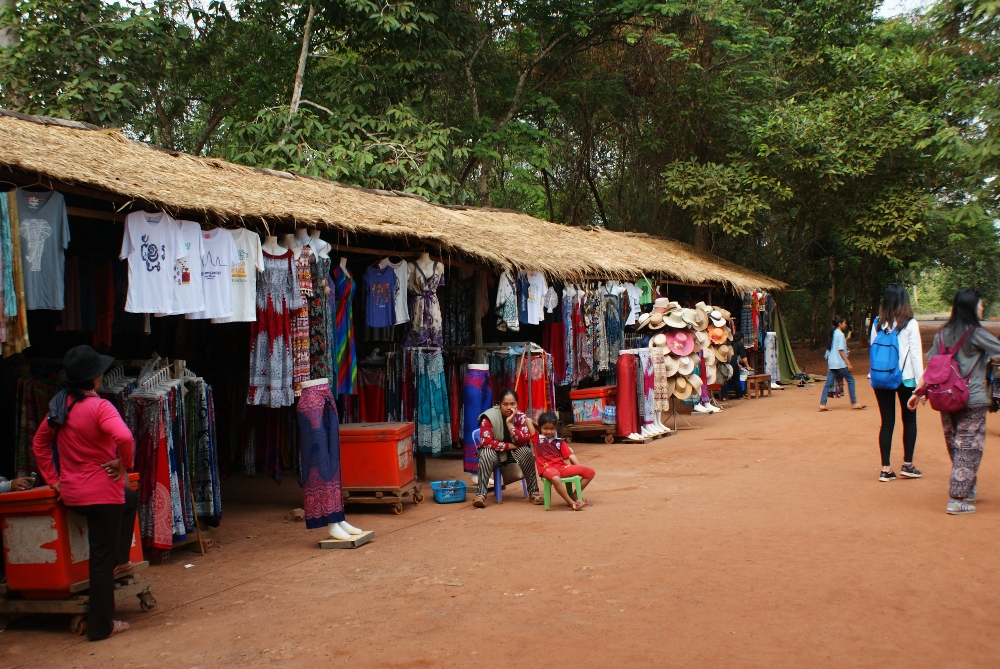 The women quickly ran towards us and proudly showed their shops offering a great deals, really great deals for clothes :) What I noticed, there was no unhealthy competition, the lady who run towards us with some clothes and reached us first, had a right to show us her shop. There was a lot of lough behind that scene :D How surprised was our tuk-tuk driver when after visiting one temple I came back in a new set of clothes :D 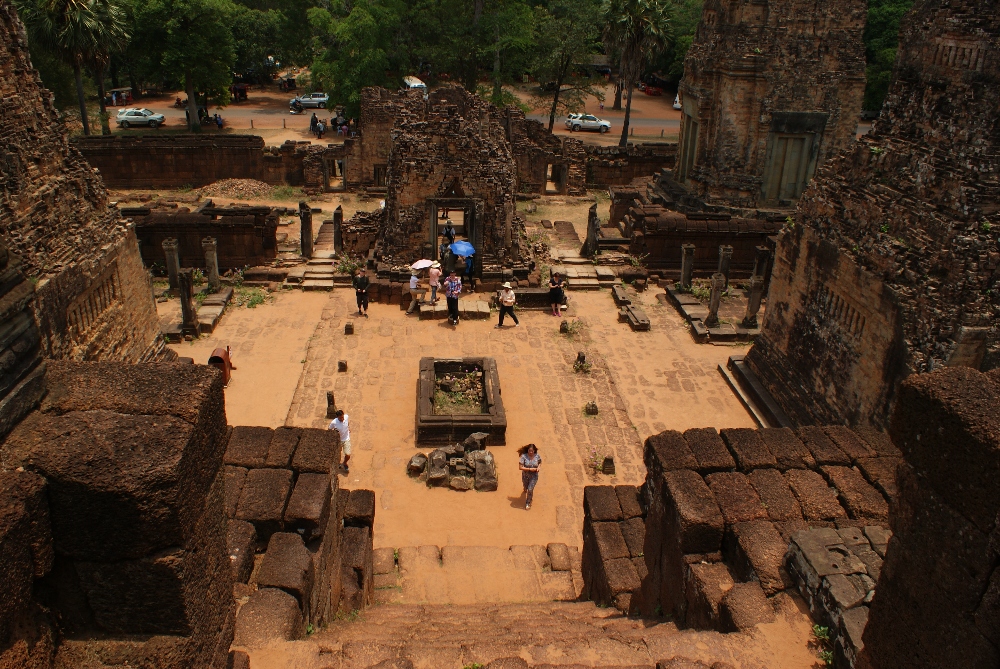 Pre Rup, climbing the steep stairs to the top of this temple is rewarded with a panoramic view of the complex. Here we admired intense, warm shades or orange colour on the walls 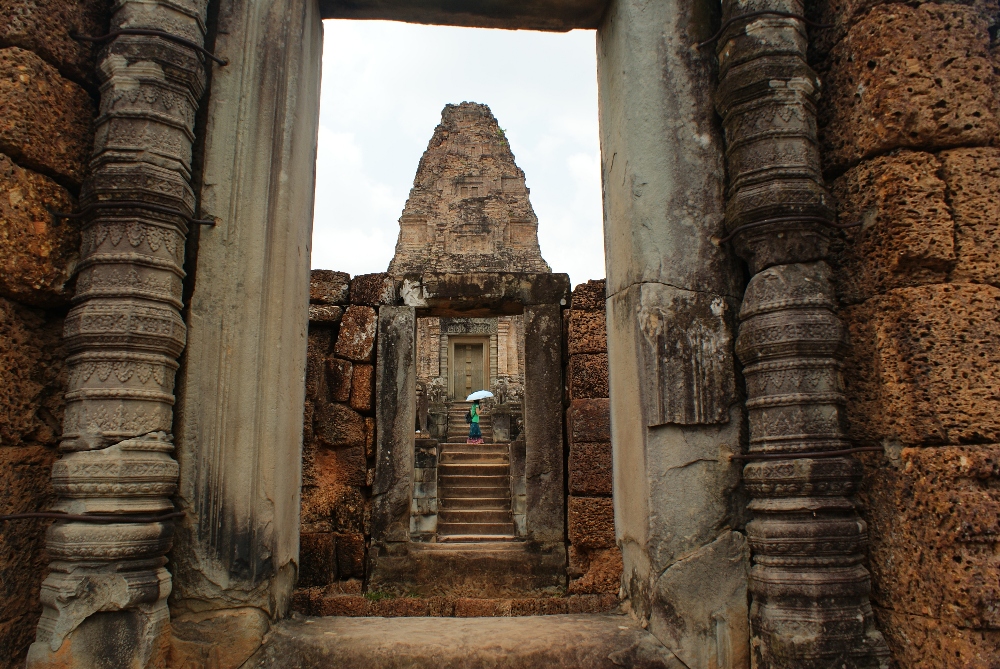 Umbrellas were very often used for sun protection by many women 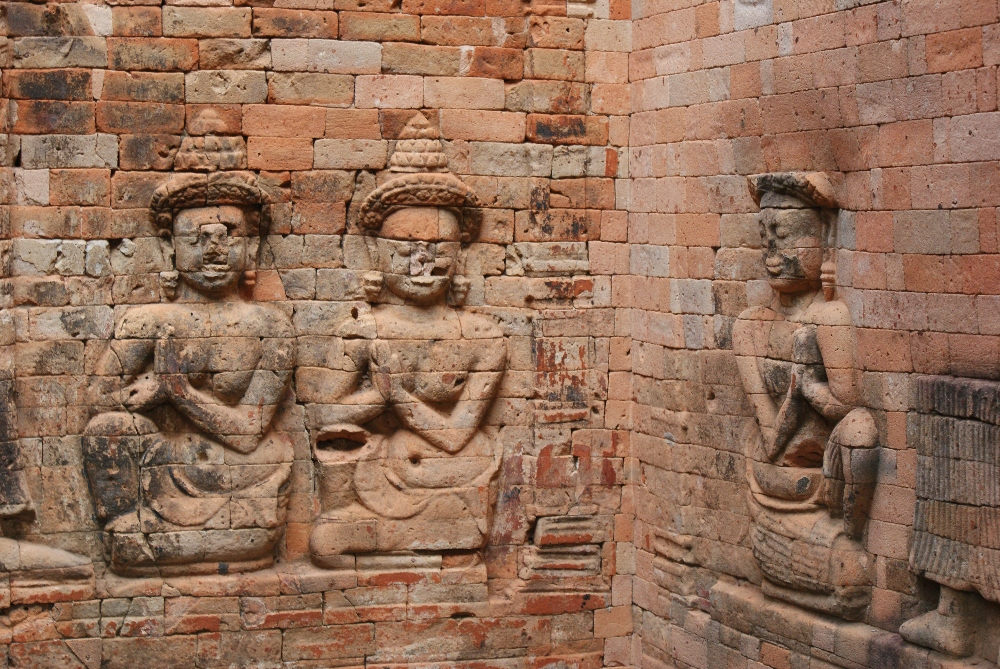 Figures seems to come out of the walls :) 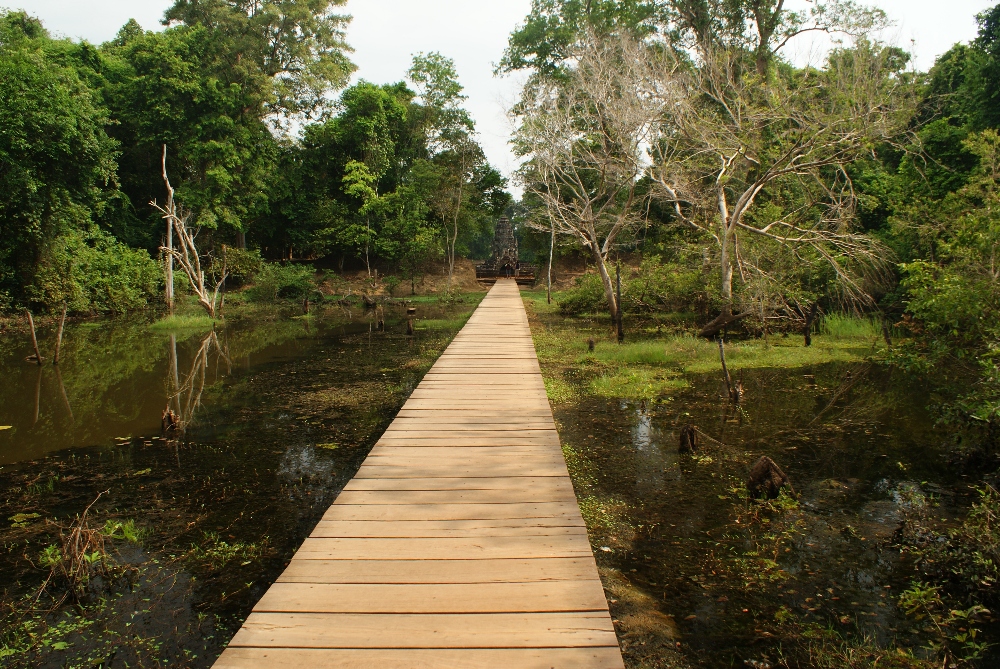 Gorgeous wooden path leading to Neak Pean, a temple located on the island in the middle of a pond. I really loved the surroundings, lush vegetation and pieces of trees sticking out of the water 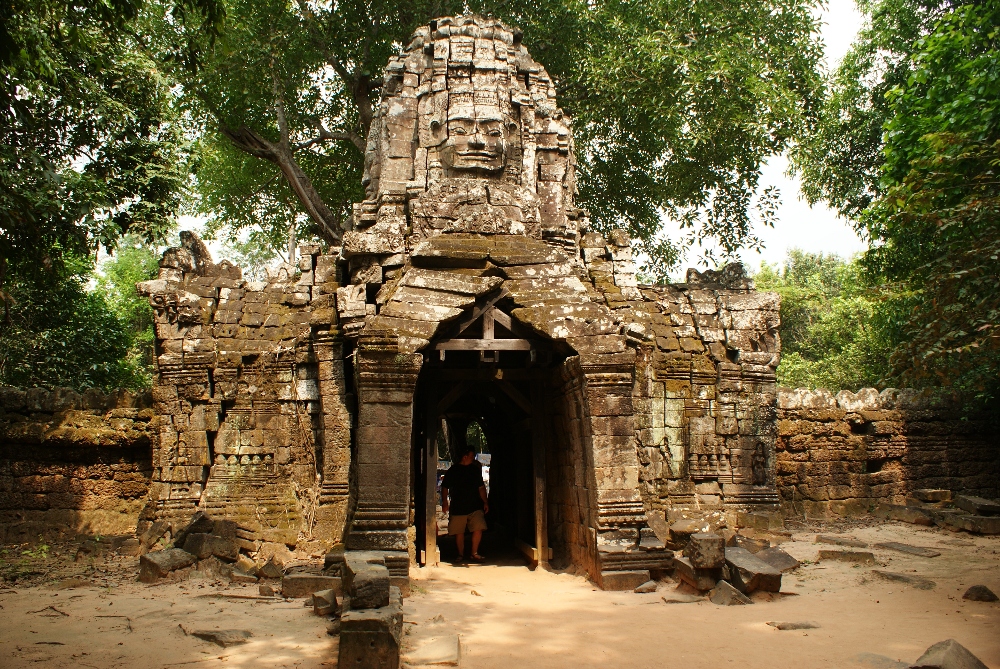 Since for the next day the plan was to see sunrise at Angkor Wat, we decided to rent a tuk-tuk with a driver. Cycling without lights at 5am did not feel safe enough. In the evening we cut a deal with one of a drivers on a street close to our hotel. He agreed to start at 4:30am and do with us the most famous temples in the whole complex: Angkor Wat, Bayon and Ta Prohm (so called small circuit) for 15$ what was the average price from what we found online… however, our driver did not show up next day! :O Either he overslept or someone offered him more money (apparently even 1 $ more from someone else could be the cause). We made a huge mistake by not taking a photo of his name and phone number, so we had no way to reach him :( It is usually indicated on the side of a tuk-tuk so remember about it. The guardian from our hotel called the hotel’s tuk-tuk driver but the price was considerable higher (28$) since he need to pay a fraction to the owner of the hotel. After a short negotiation he agreed to lower the price to 20$ and 10min later we started a crazy drive towards Angkor Wat to catch the sunrise! I was shocked to see so many tuk-tuks were headed in the same direction. I realized there was no chance for a quiet sunrise :/ After quick control of our tickets, we reached parking packed with hundreds of tuk-tuks. Now it was time to walk as fast as we could and take over as many people as possible :) 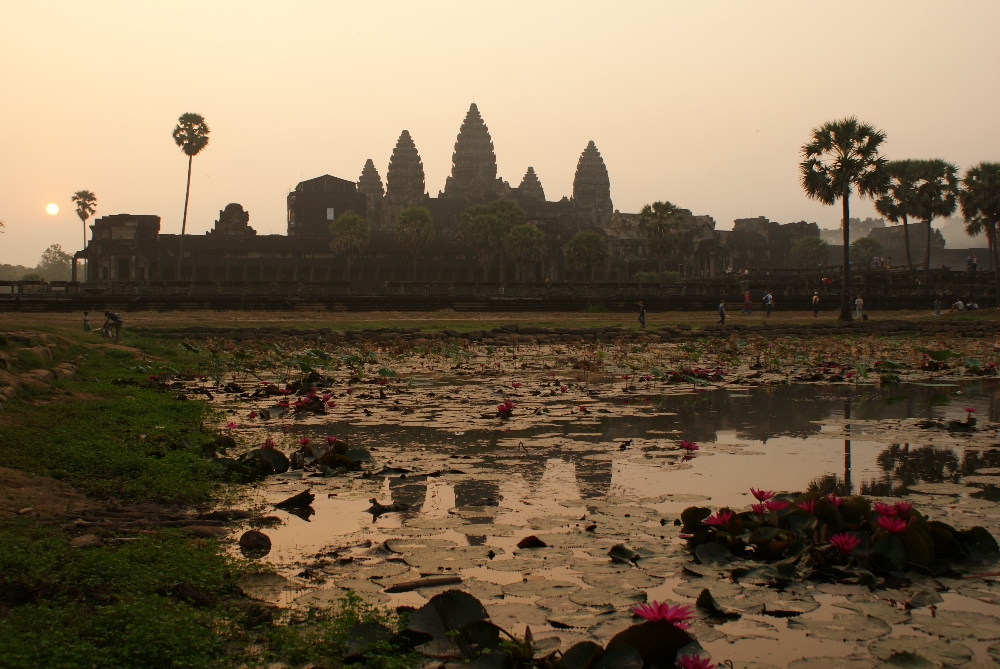 Sun rises behind the Angkor Wat illuminating the temple. The weather conditions were not perfect that day but still the experience was unforgettable... 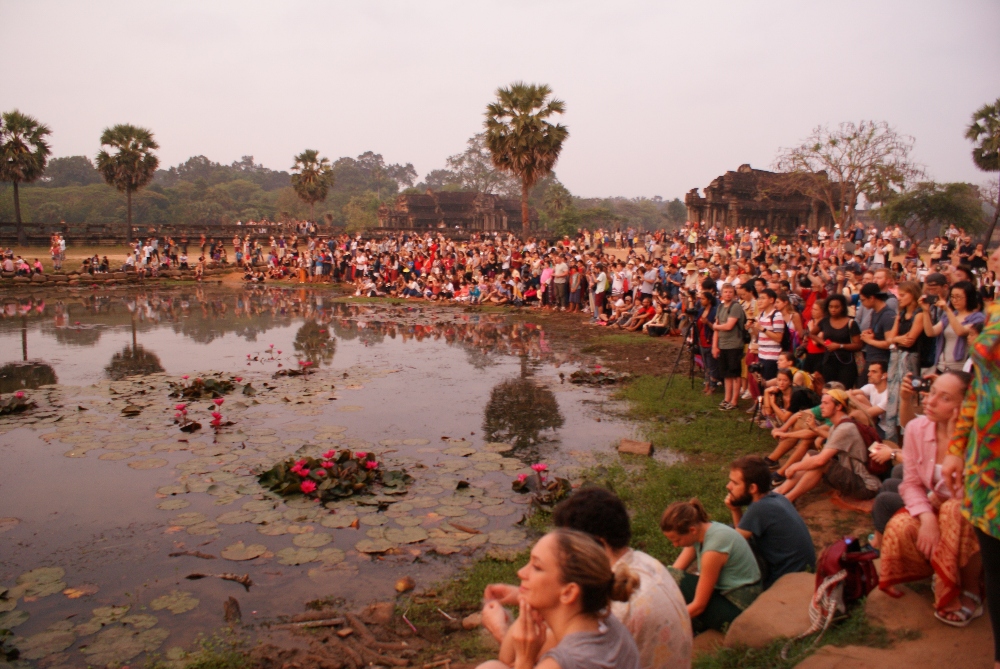 ....however we had to share it with hundreds of people :O 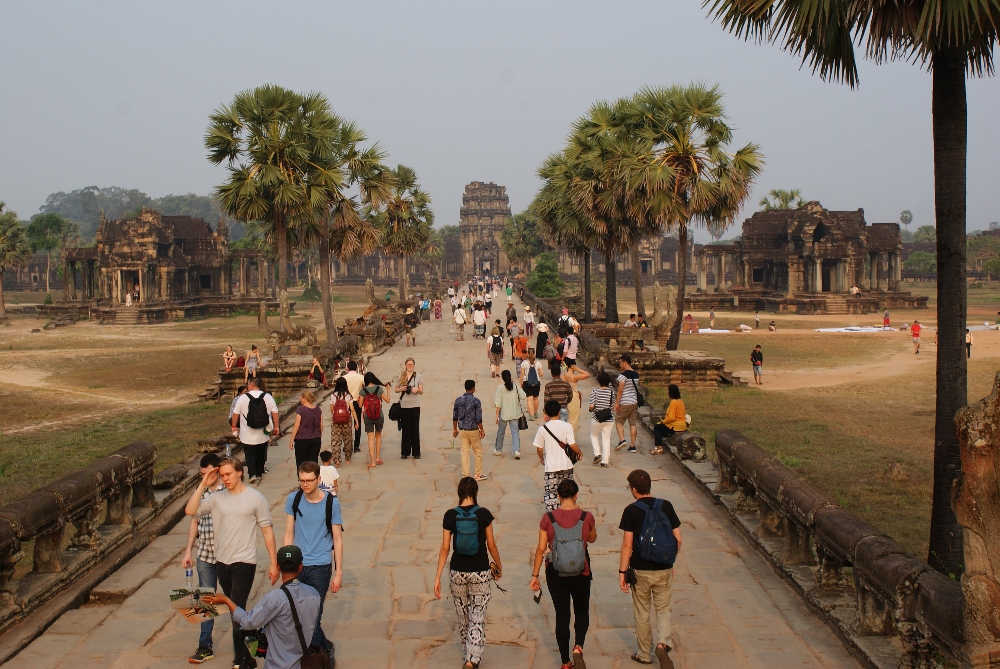 Main path leading to the Angkor Wat, already crowded ... and it was just 7am :)

Angkor Wat is the biggest temple in the whole archaeological park with five famous towers shaped like lotus buds. You can go to the top platform and admire the beautiful surroundings (there is a limit of people who can be there at once so long ques can occur). This temple is still actively being used, as indicated by the presence of monks and shrines in some spots a monk will pray for you if you give them small donation. We spent maybe 1.5 hour wandering inside multiple corridors before the big groups of tourists entered, their guide disturbing the peace inside with speakers to amplify his voice :-O I do need to admit that this complex looks better from the distance when great lotus-shaped towers reflected on the surface of the pond. Angkor Wat lacks some of the intricate decorations you can find in some of the smaller temples :-D 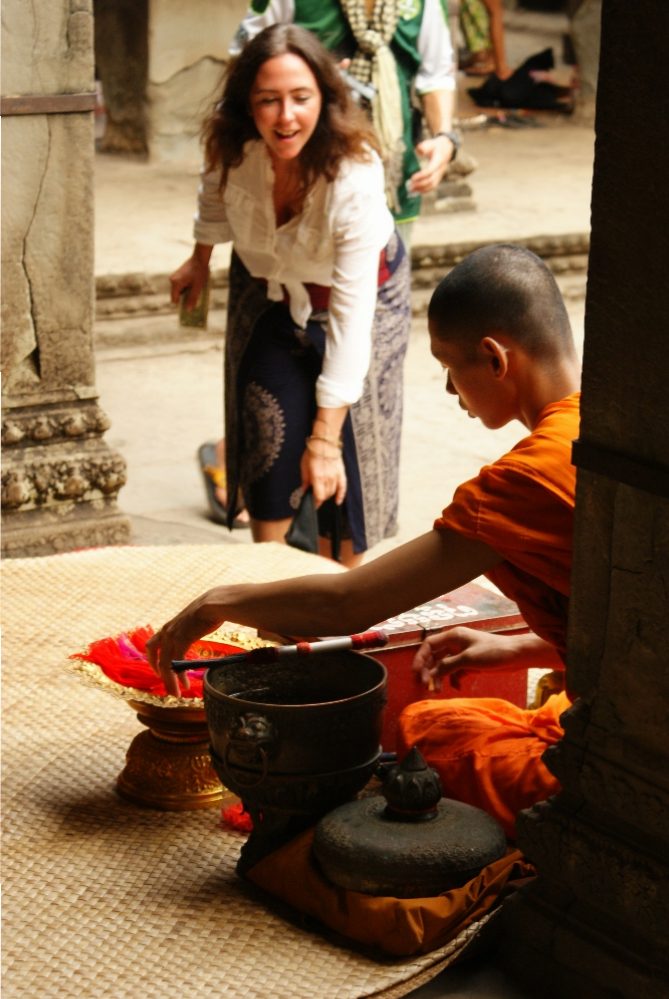 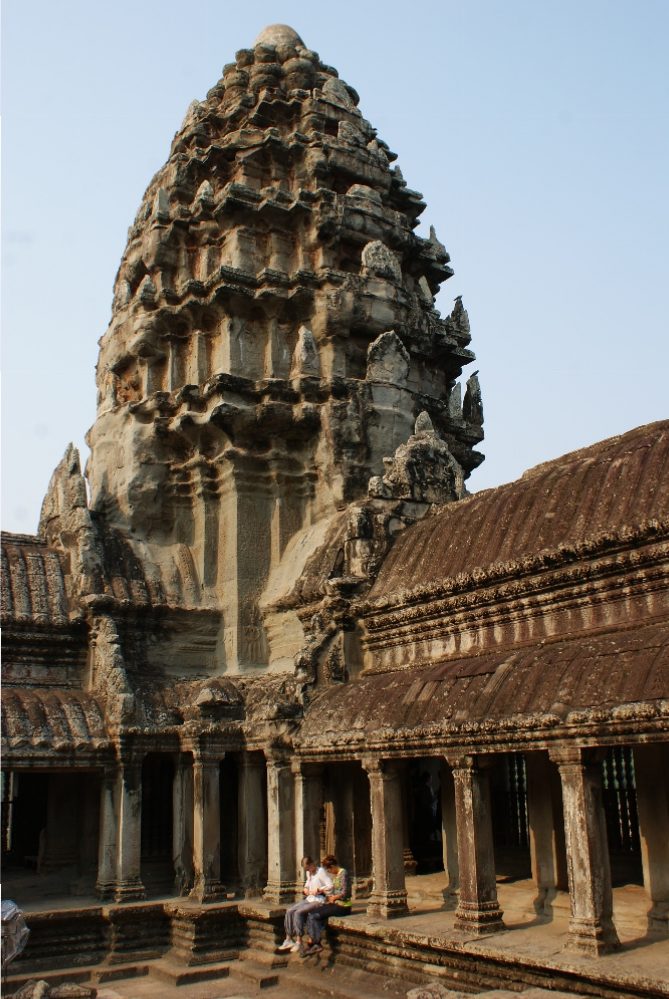 On the photo below you can see one of the 5 gates which were leading to the ancient city of Angkor Thom where inside you can find a famous Bayon, one of our favorite spots! Unfortunately, nowadays it is surrounded by a big roundabout  so you can see and hear the traffic during your visit inside. The temples located a bit further from the roads had this natural atmosphere of isolation and mystery. It was already very crowded when we arrived there, especially on the top level. However, we found a quiet, narrow, mysterious corridors on the ground level. Away from the crowds we felt like true explorers :) Afterwards we walked through Baphuon, Phimeanakas to finally see The Elephant Terrace and the Terrace of the Leper King. 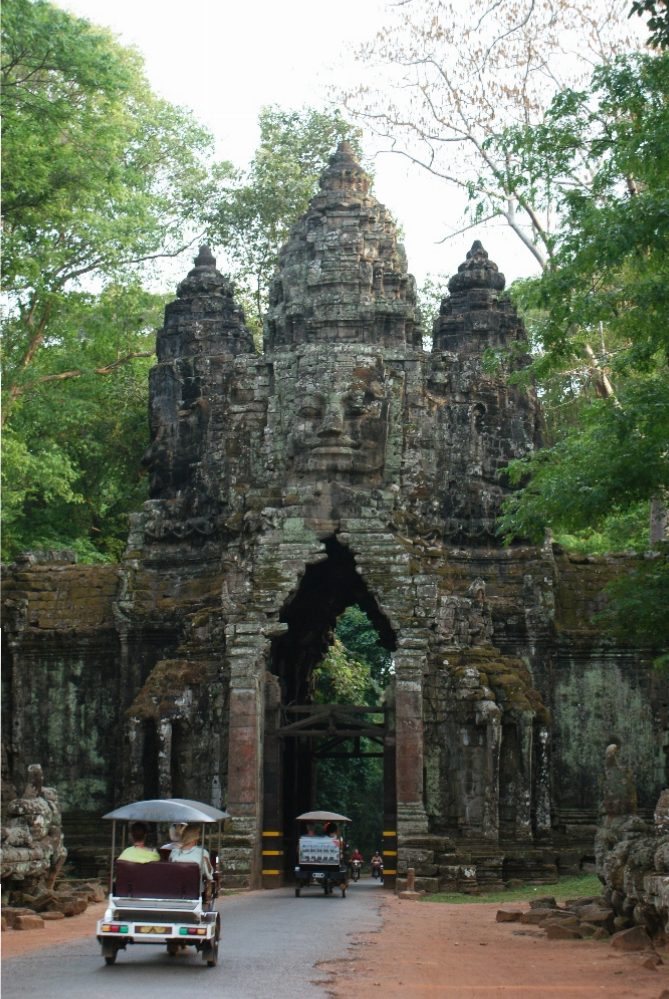 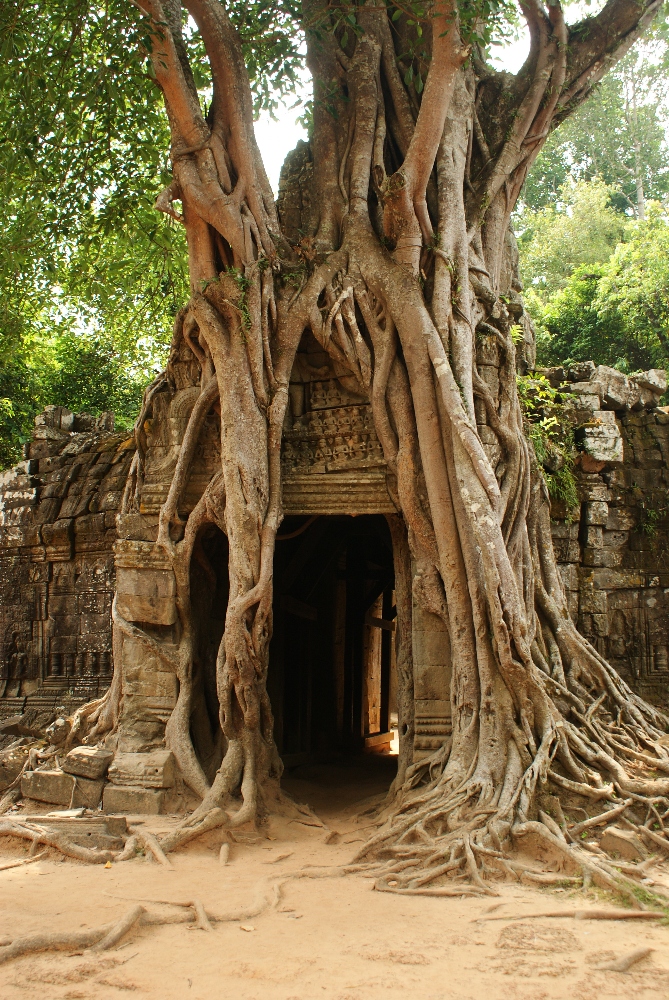 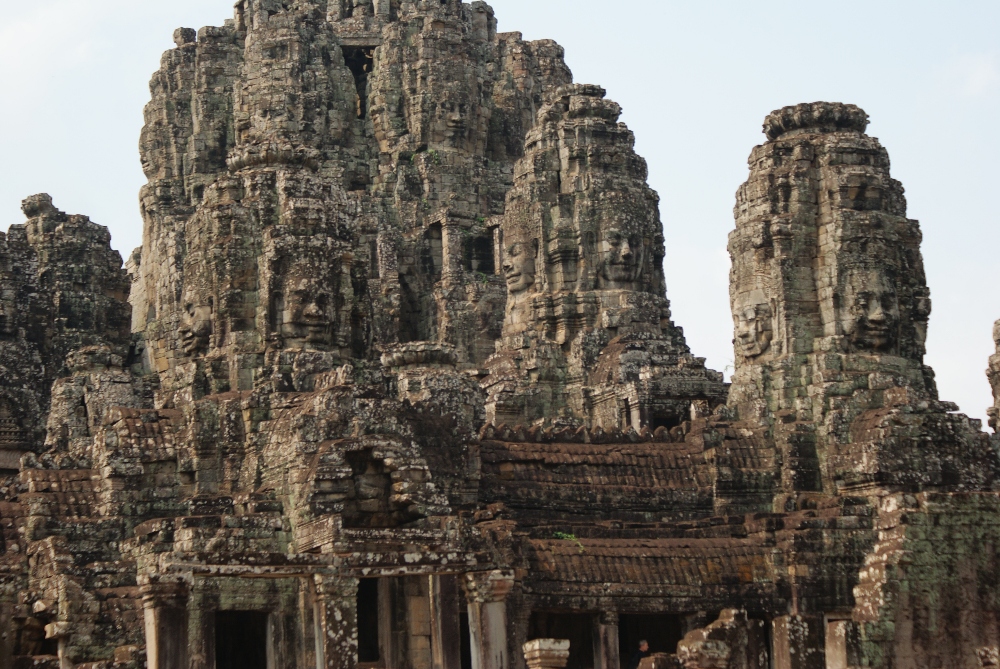 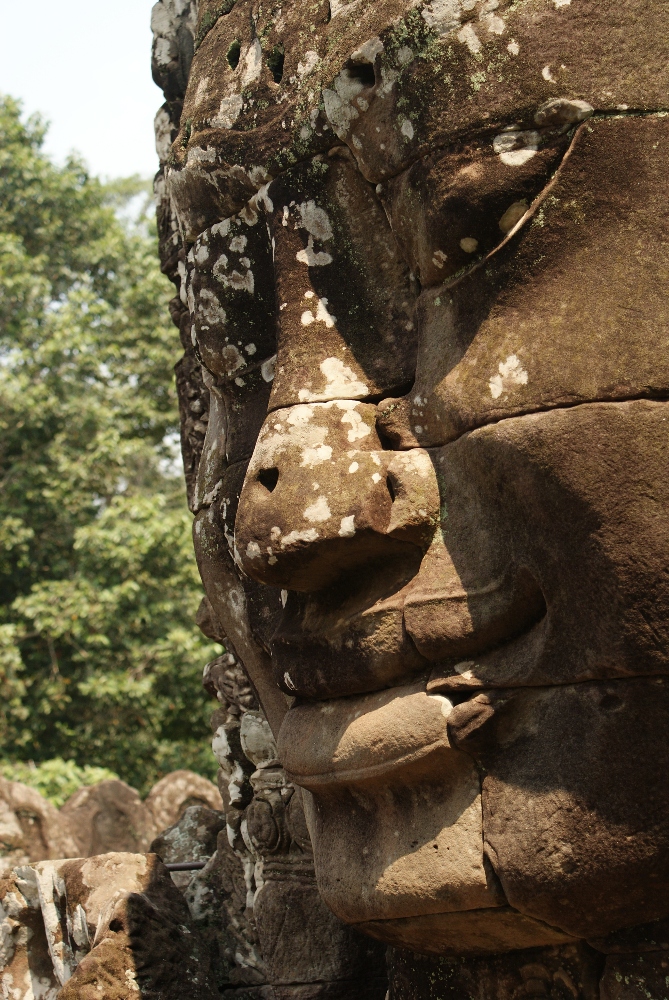 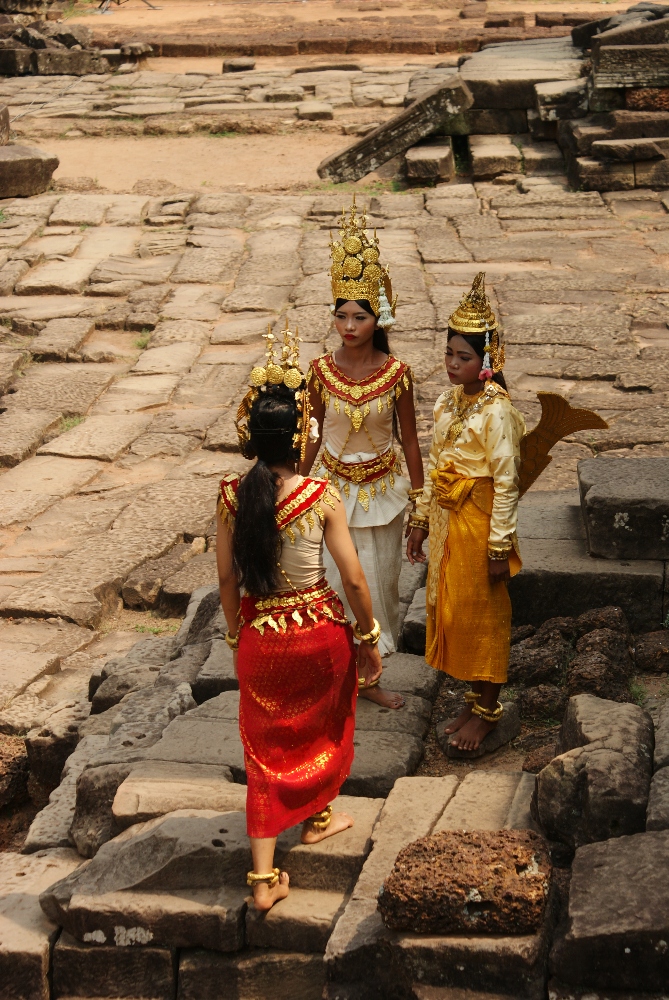 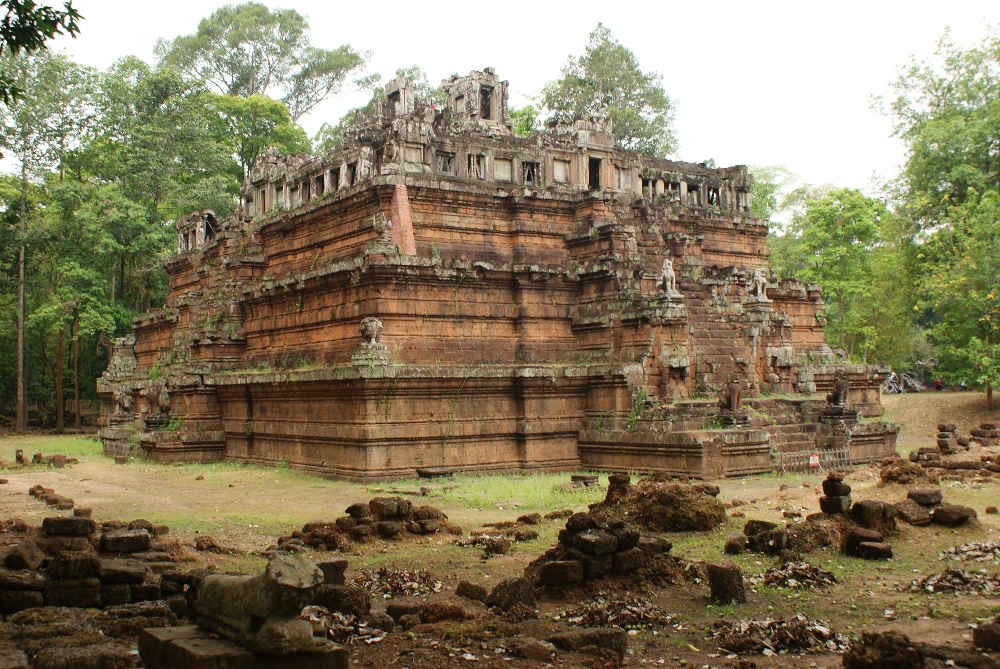 Phimeanakas, small Hindu temple which is not reached by many visitors

After a lunch break it was a time for the final highlight of that day, Ta Prohm. Made famous by the (first) Tomb Raider movie with Hollywood star, Angelina Jolie playing the role of Lara Croft. This temple is really special as trees were not removed during the renovation so you get an impression how Angkor looked when discovered by the French naturalist Henri Mouhot in 1860. Of course, a lot of work was done to prepare this place for tourists so that everyone can visit this place safely. We just loved this temple so much that decided to come back next day at the opening hour (7:30) to see this place without the crowd (we found a tuk tuk driver in the morning). Haha, it turned out that only during the first 30 minutes you can explore this place with only a small group of tourists because at 8am the first buses arrived. Anyway, it was totally worth it since morning sun was creating an amazing atmosphere inside! Trees are inseparable elements of the temples, they are both destroying and holding together the whole complex at the same time. 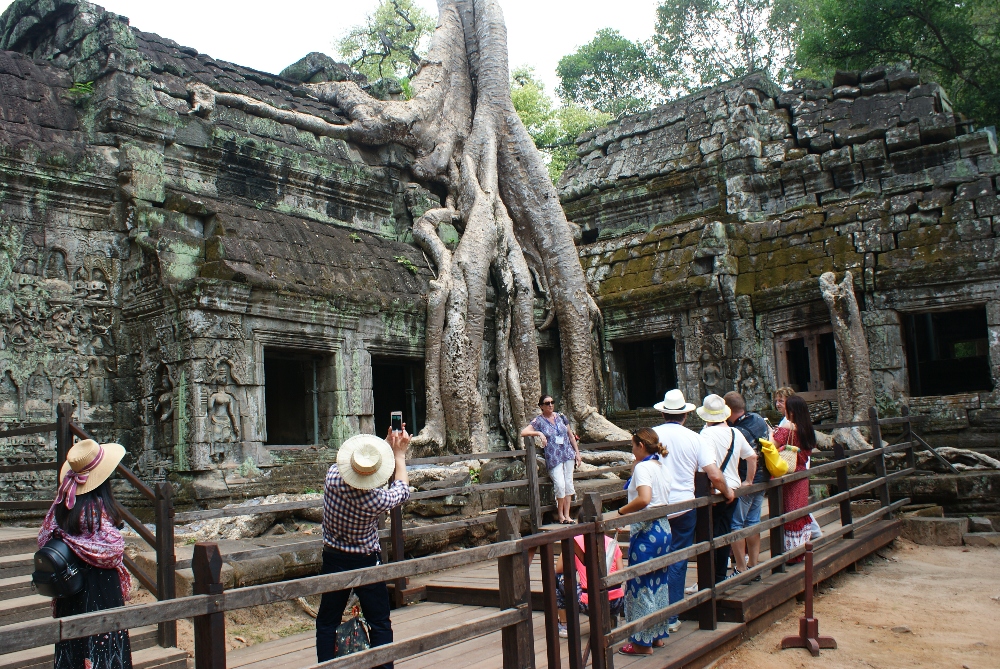 The most recognizable place, location where Tomb Raider was shot 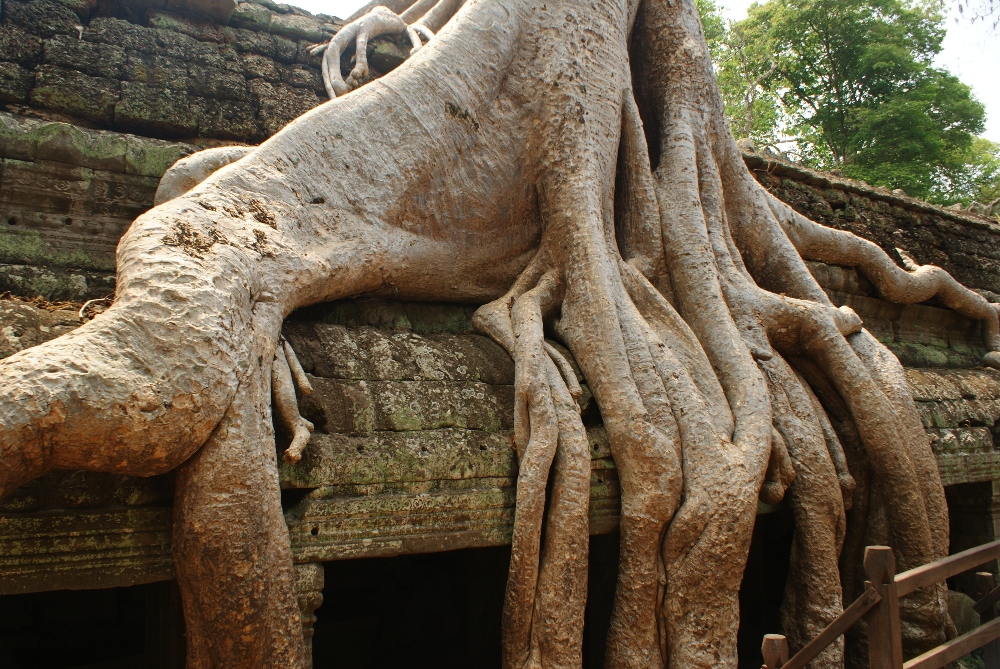 Trees still grow out of the ruins, showing their huge power! 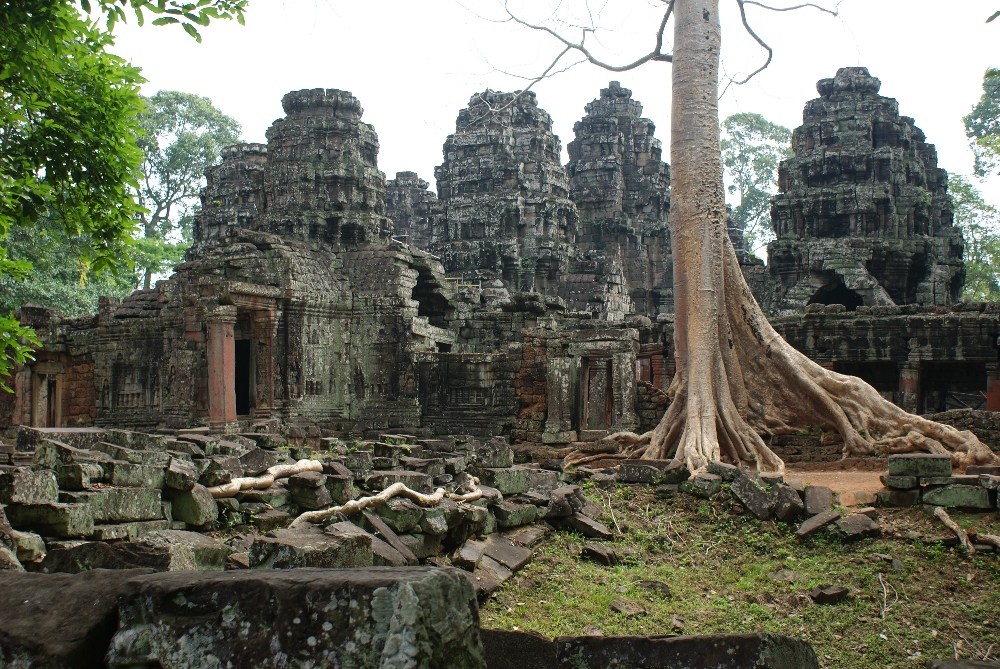 Angkor Wat is a huge archaeological site where between famous temples you can find many restaurants but also small villages with traditional houses and local markets. We decided to check few temples further away from the main site which are less known to the public: Banteay Samre, Lolei (in scaffold!), Preah Koh and Bakong. It took us quite long to get there following the main road full of trucks. I really dislike those unhealthy fumes and didn’t feel very safe in our tuk-tuk.

If you have a three day pass, an great alternative after seeing both the grand and petit circuit is to rent mountain bikes and explore hidden paths and small temples inside the main Angkor archaeological park. 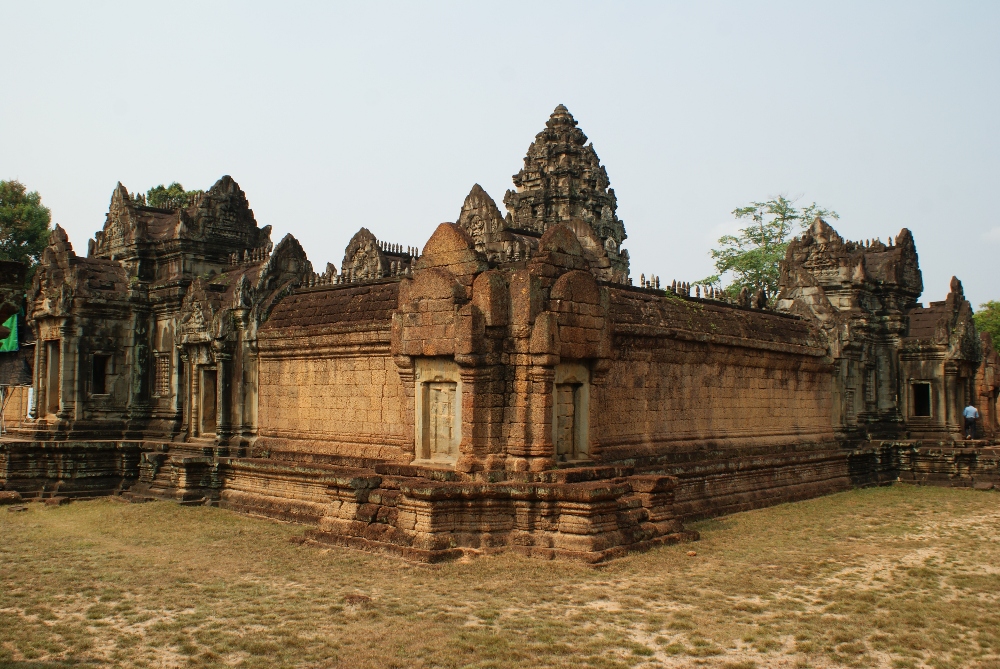 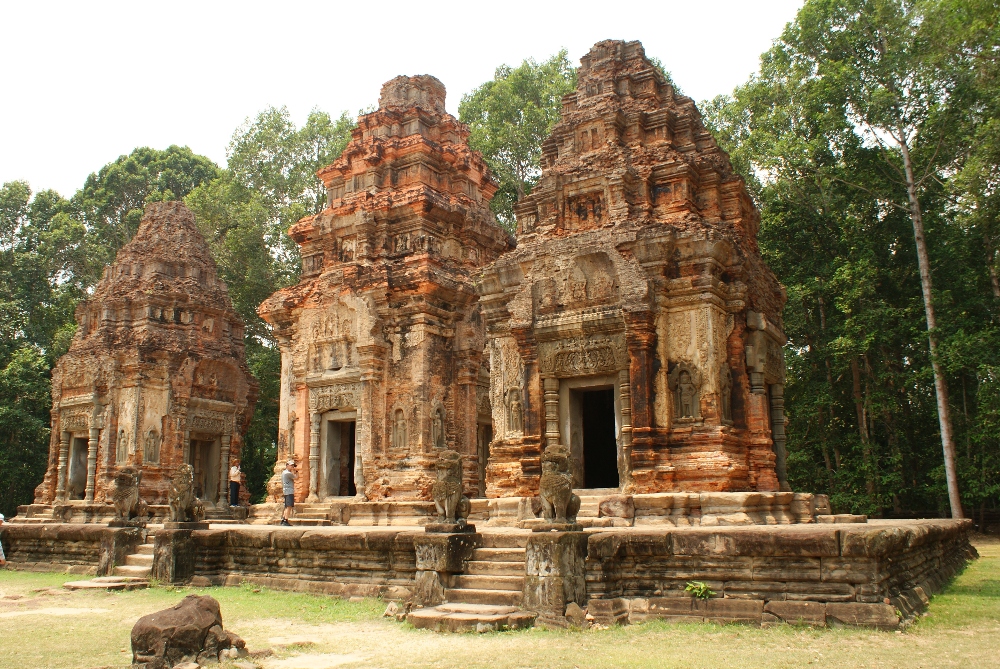 Three towers of the Preah Koh 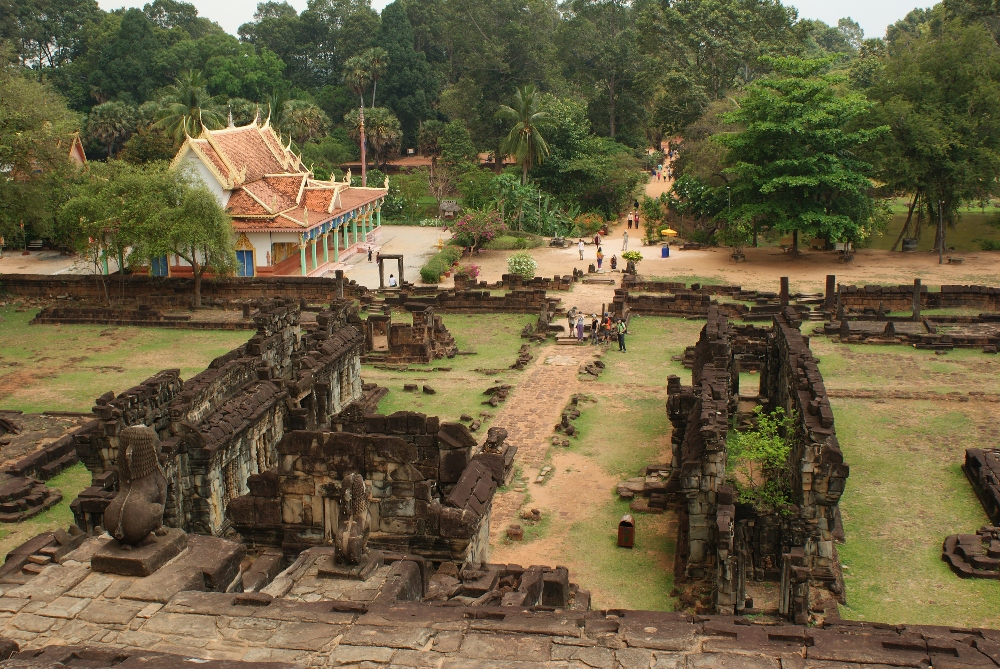 The surroundings of Bakong, view from the top platform 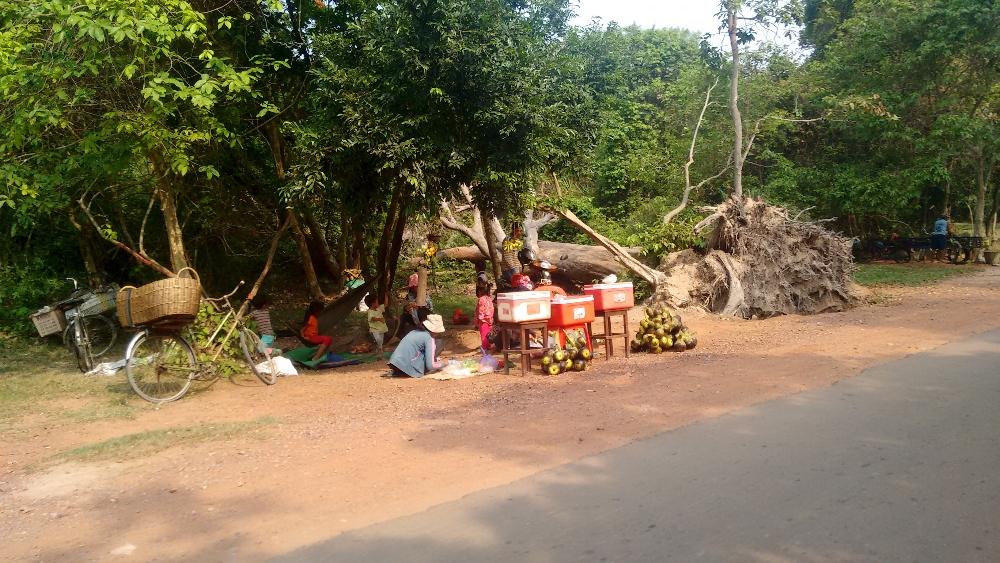 Along the road women sell fruits and other snacks, children are playing next to them... 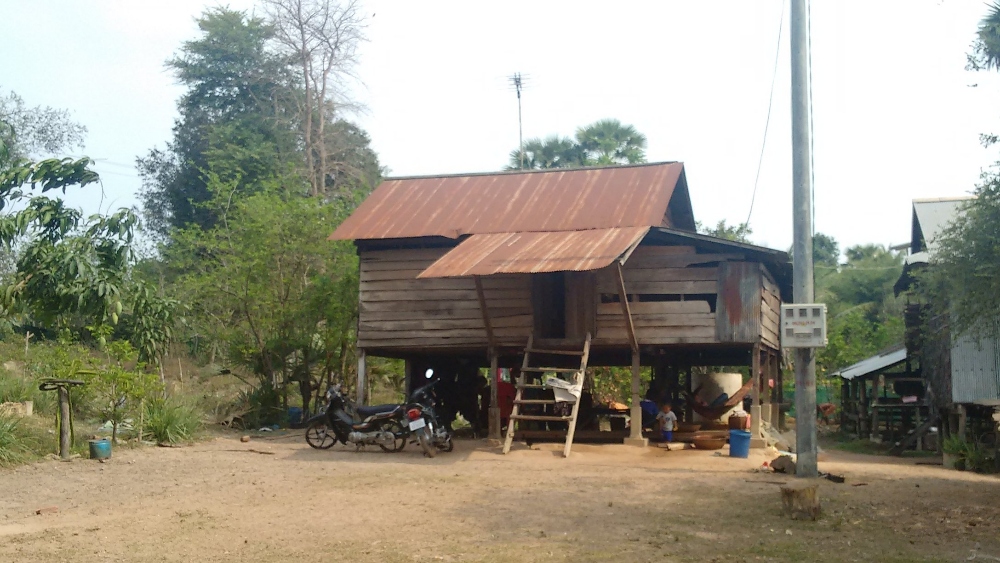 Elevated construction helps to protect homes from flooding during a monsoon storm. 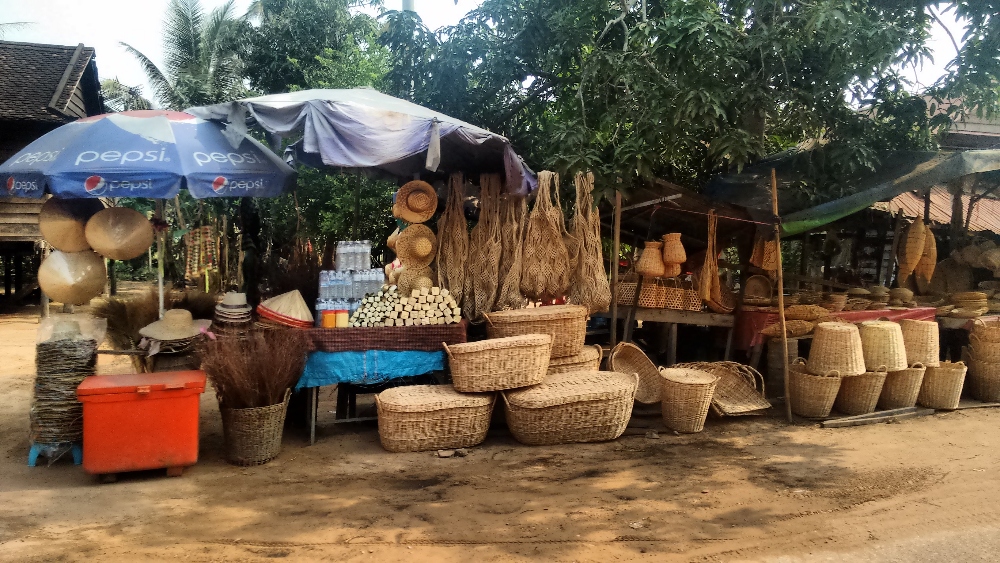 While passing the small villages between the temples we noticed many stalls with wicker items and characteristic red portable fridges. Each of the contains treasures, ice with cold sodas and water inside :D 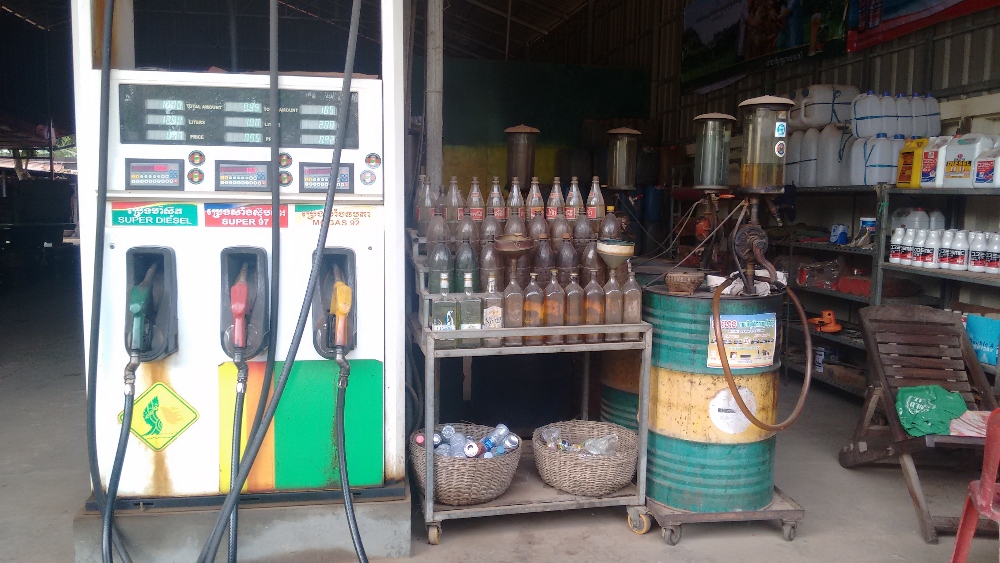 Our tuk-tuk driver stopped here to get some petrol :O Usually you can buy a petrol from a plastic bottle next to the road so that one was pretty advanced station :)

The city itself did not impress us so much (besides the food! It impressed us so much I’ll write a separate post about it). Exclusive hotels and restaurants, many shops, cheap souvenirs and famous Pub Street where you can buy cheap drinks. Good vibes in the city are missing. We did like the small restaurants and market with handmade items where I bought mix of spices to prepare ourselves a famous amok soup :) We noticed in the city decorations for their New Year celebration started to appear. Yeap, at that moment we realized we are going to celebrate this event in Laos in less than two weeks! :O 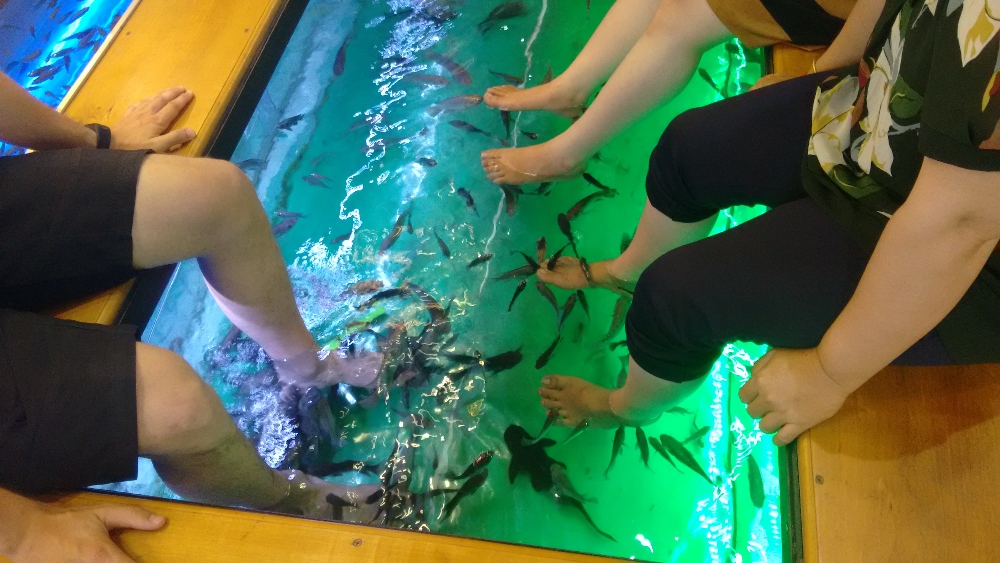 The Fish Pedicure :) Some would say a kind of a massage but not for people who get tickled easily (so me), then it is torture! :D

Share:
Previous: PassApp: Getting around Phnom Penh... Next: Yummy! Cambodian cuisine a well-kept...