Crossing the borders by land is always more complicated than by plane but we like challenges. Actually, the ride from Siem Reap to Don Det in Laos was smoother than we were expecting :) Maybe due to the right choice of bus company (Asia Van Transfer) or just pure luck. Since the journey isn’t easy and requires a few changes from bus to van to boat, it was very useful when the employee of the company showed us a folder with pictures detailing how the transfer would go. The morning of our departure they explained us again in details the whole procedure so we felt quite confident. However the driver who took us to Stung Treng (first stop where we had a 1 hour break for a lunch) was driving in a very dangerous way, speeding 70-90km/h through a villages full of people cycling and kids playing on the side of the road. That was the longest part of a journey, 5 hours by minivan. After a lunch (2-5$) another minivan drove us to the border where we had a chance to exchange American dollars to Lao kip (exchange rate 1$ = 8200 Lao kip, on Don Det it was 8100) and fill the entry card for the Lao visa. However, first we had to leave officially Cambodia what means getting a stamp for 2$. Then we were free to walk with our luggage to arrivals of immigration office on Lao site where we all could get visas. Visa rates change depends on country of your origin, but there is a chart to see your country rate, for Polish citizens it is 30$, Sebastian (Belgian) had to pay few dollars more. On the top of that we paid an additional 1$ (per person) because we were crossing the border during the weekend and 2$ (per person) for the “activation” of the visa. It is basically a state-condoned bribe, but they’ll hold onto your passports until you pay up. So arguing about those extra fees will just extend the whole procedure and the driver will not wait for someone who is late. After all got their visas we started the last drive to Nakasong where we had to change for a boat to Don Det (north pier). During less than 20 minutes boat ride we knew this gonna be an amazing place! And indeed, we stayed there longer than we planned :D

The Mekong river runs through China, Myanmar, Laos, Thailand, Cambodia, and Vietnam. Big differences in the water level and many rapids create a perfect conditions for spectacular waterfalls and we were going to look for them. This region of Mekong delta consist of lots of tiny islands between each people travel by small boats. Most of them are uninhabited. 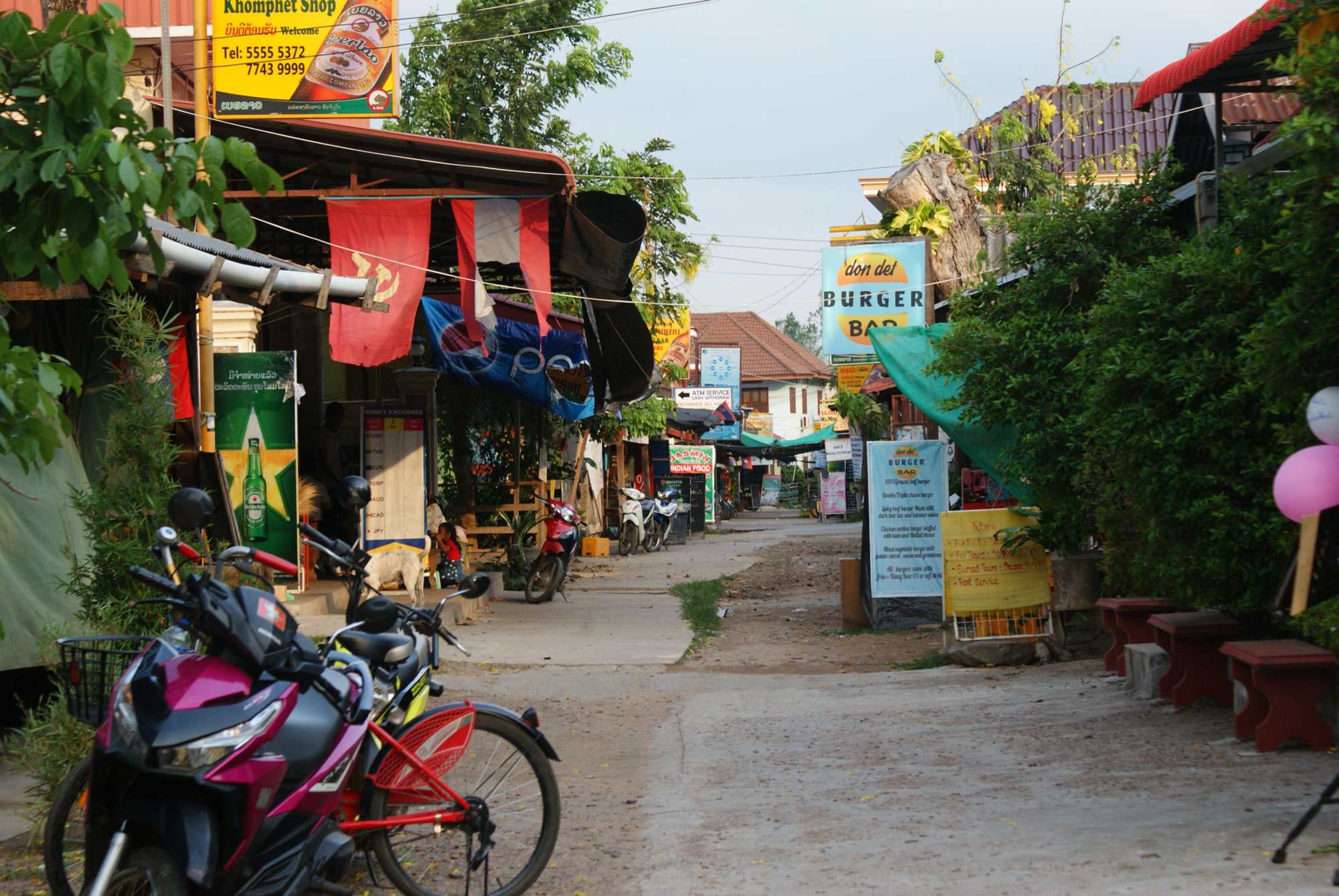 There is no ATM on the island so be sure to have enough cash with you! It is also not necessary to book a room in advance since there were plenty of options to choose from. There are two main roads on Don Det, on the sunrise and sunset site of the island, where you can find a wide variety of bungalows. Get one with a balcony and a hammock, this island is just perfect to lay back, relax and do nothing :) We booked a (rather expensive in hindsight) hotel room for the first night and were welcomed by two cockroaches (which Sebastian had to deal with before I could sleep), as we decided to stay longer we got a bungalow on the sunrise side of the island. The advantage of the situation was that we could check the cleanliness, the condition of the mosquito net and the comfort of the hammock before taking the room :)

We again decided to rent a bikes (10000 kip per bike) and explore the island where we stayed, Don Det and Don Khon. Both islands are connected by the historical French bridge with a beautiful view on Mekong Delta backwater. We started to cycle from the north pier of Don Det, following the dirt path on the sunrise site of the island. Then we crossed the bridge and again started to cycle along the east shore what is indicated on the map by increasing number of kilometers. 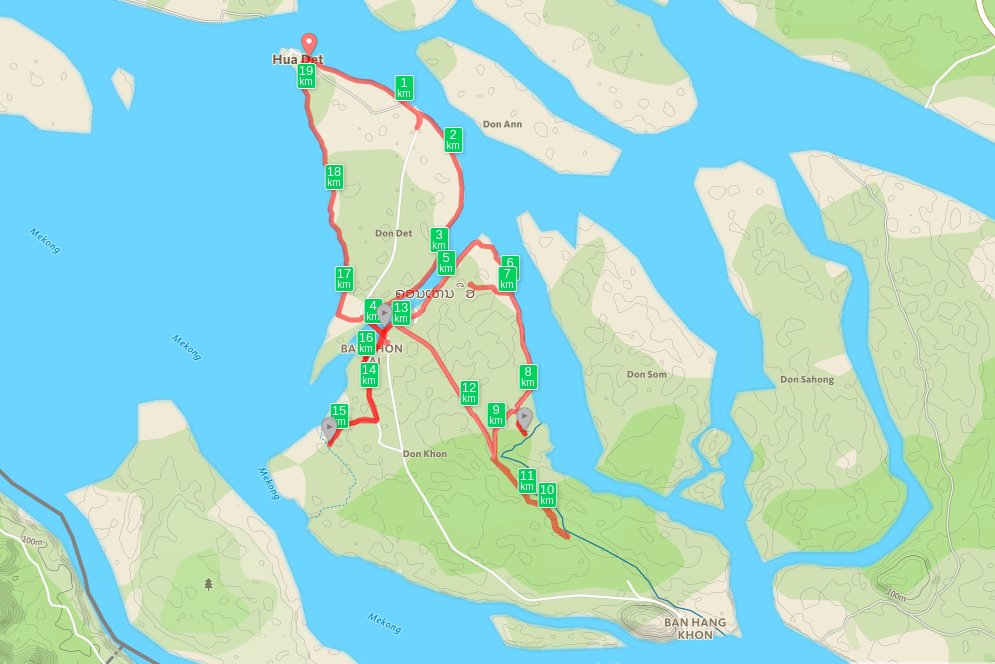 As indicated on the map, we cycled around 20km on both Don Det and Don Khon 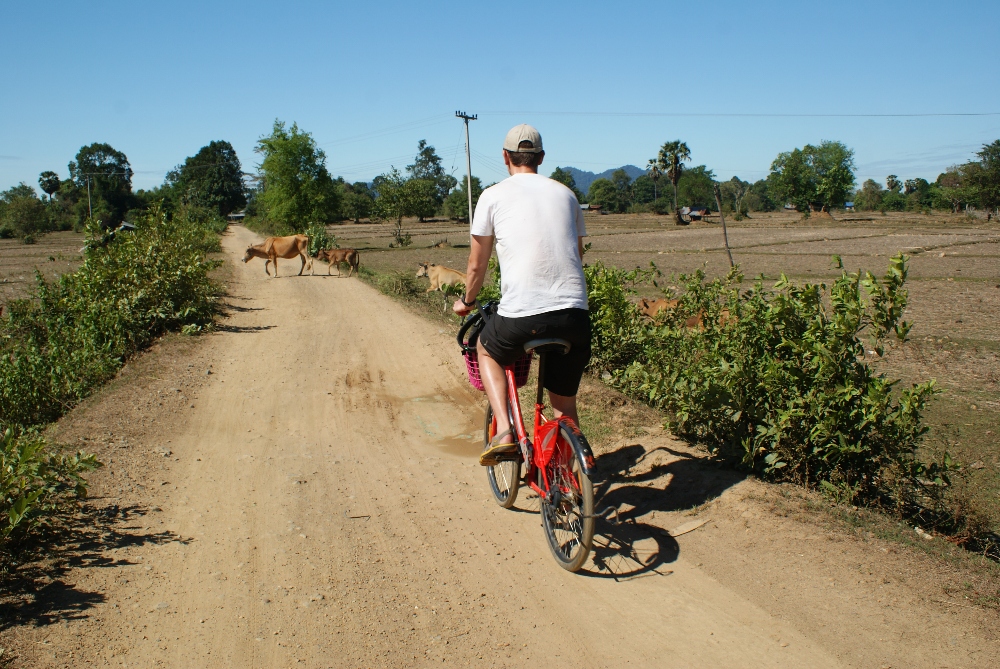 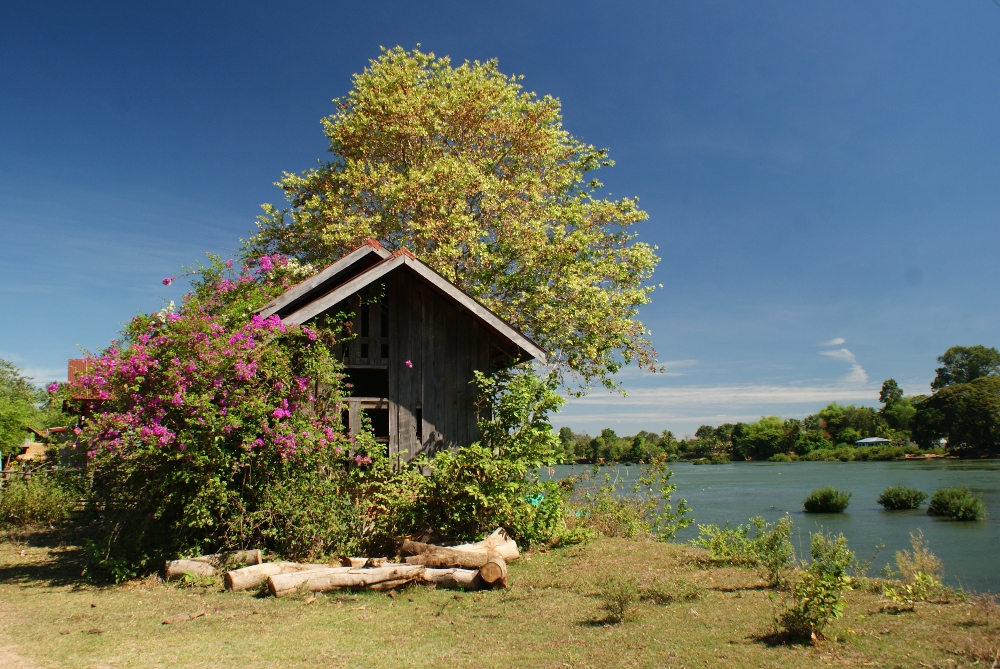 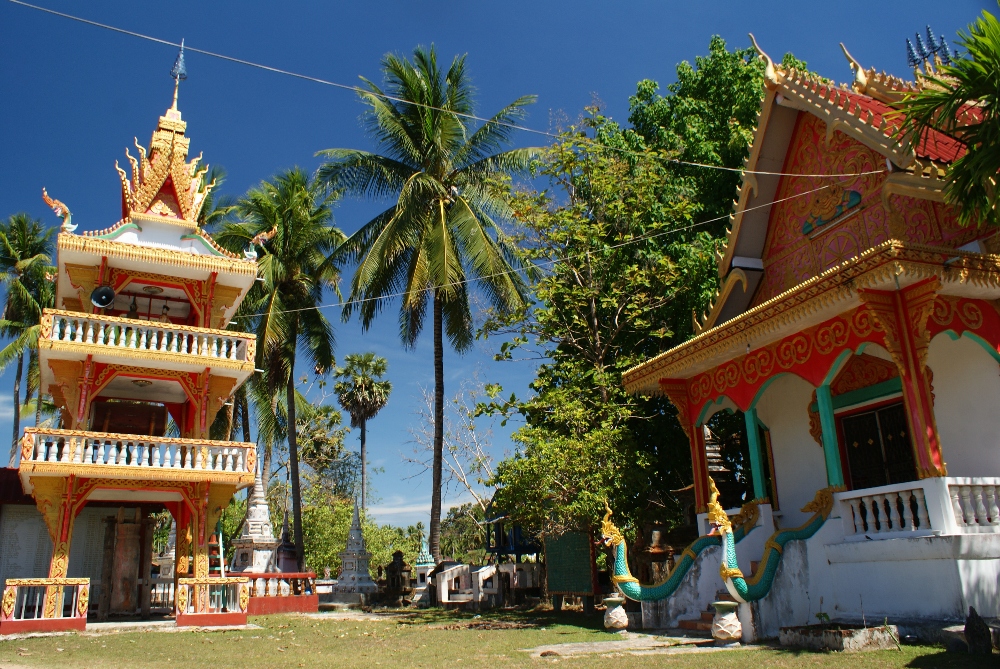 The only church on Don Khon, as always beautifully painted and well-maintained 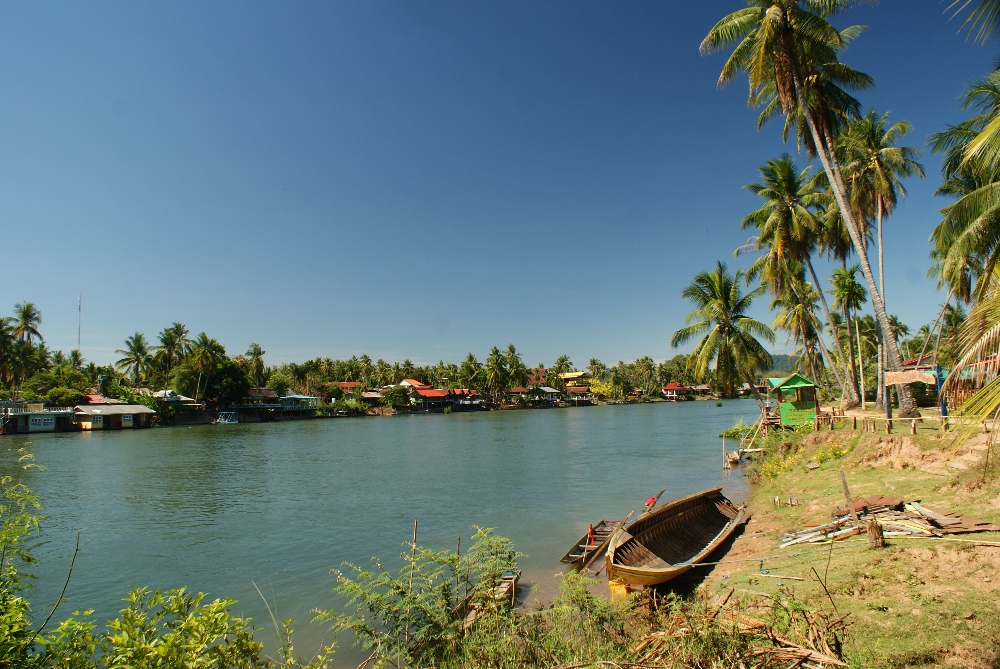 The shore of the Don Khon visible in a distance, our next destination

Getting closer to the bridge connecting two islands, Don Det and Don Khon

After around 8-9 km of cycling, already on Don Khon, we noticed sign pointing to the waterfalls and decided to check them. We left our bikes close to the restaurant, crossed an unstable wooden bridge and started to look for the best view on waterfalls. The waterfalls are a bit hidden so you need to carefully walk between high bushes (we turned left after crossing the bridge). There was also a box to donate some money for a maintenance of the bridge by locals. 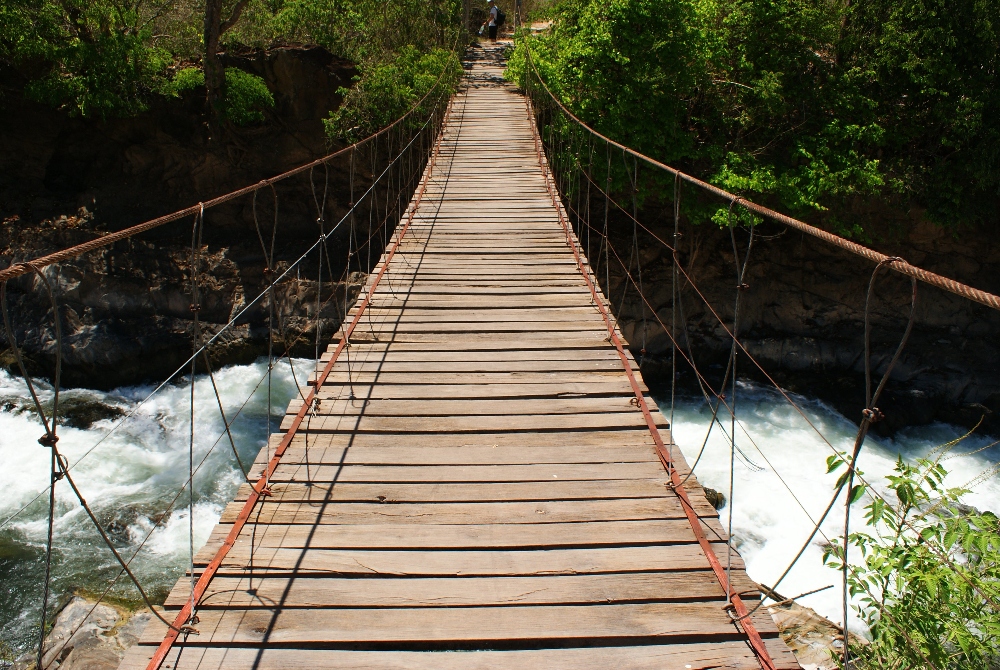 Wobbly bridge remained me of these from Nepal :O 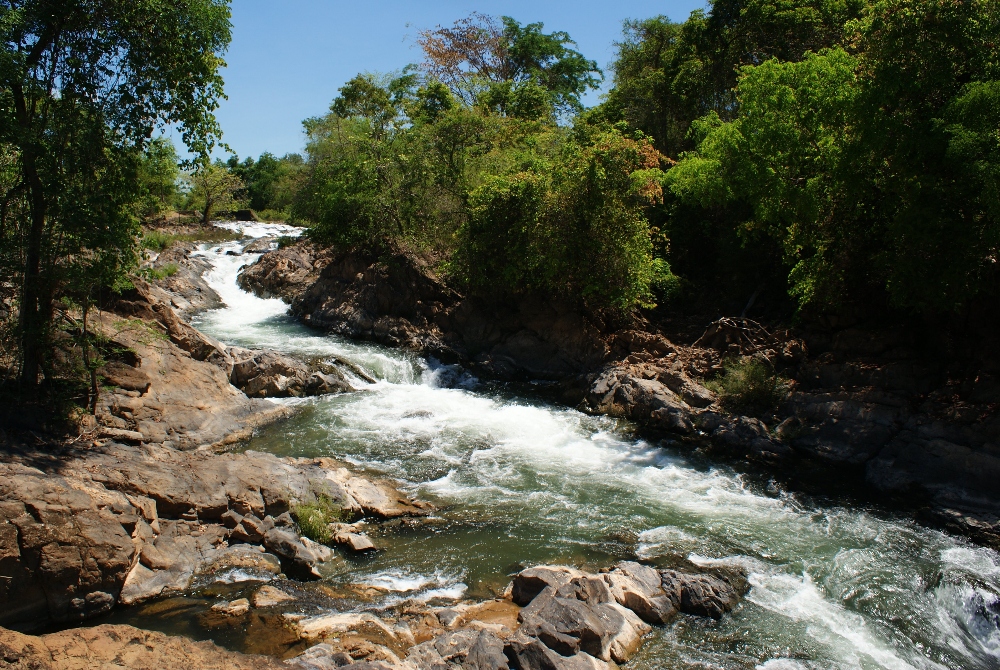 Our idea was to cycle further to the south of the island, however at one point we were forced to stop because the bridge collapsed. With no way to get across we had to backtrack a few kilometers and take another path. It was getting awfully hot already … perfect time for a lunch and a cold drink with a view over the Mekong Delta. We left the main attraction of the island, Li Phi Waterfalls for the afternoon. On the way there we noticed rusty locomotive, legacy of the time when there was a railway connecting both islands (7 km long). It was closed in the middle of 20th century. 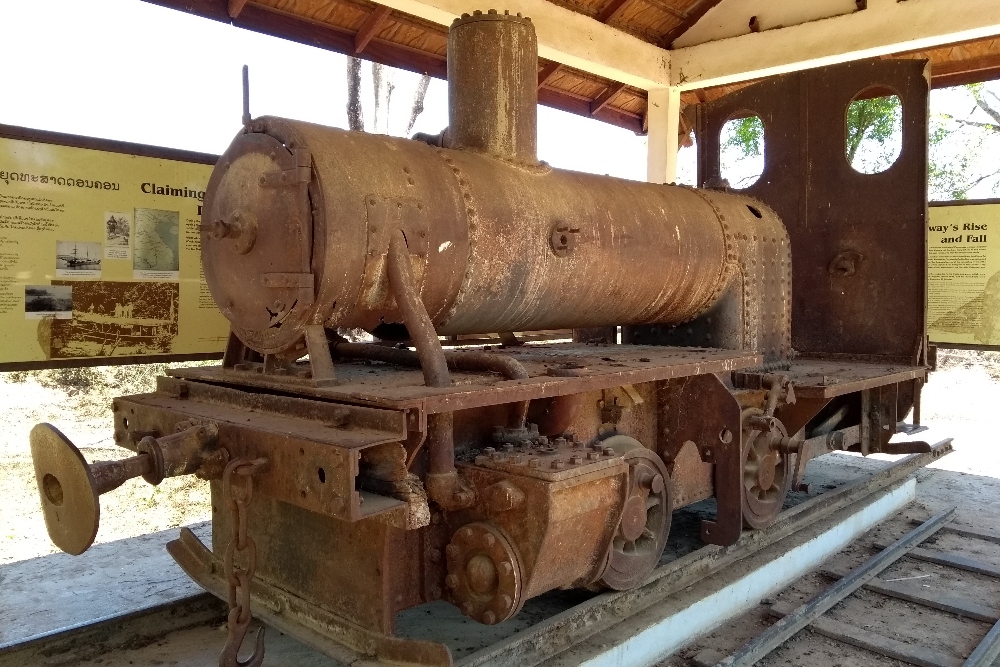 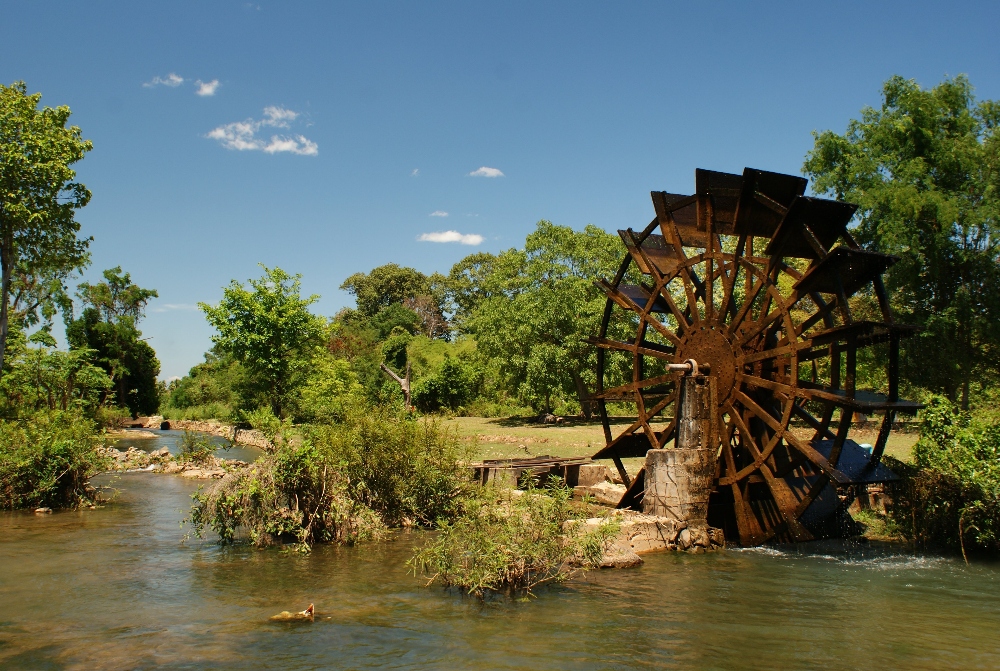 Watermill close to the waterfalls 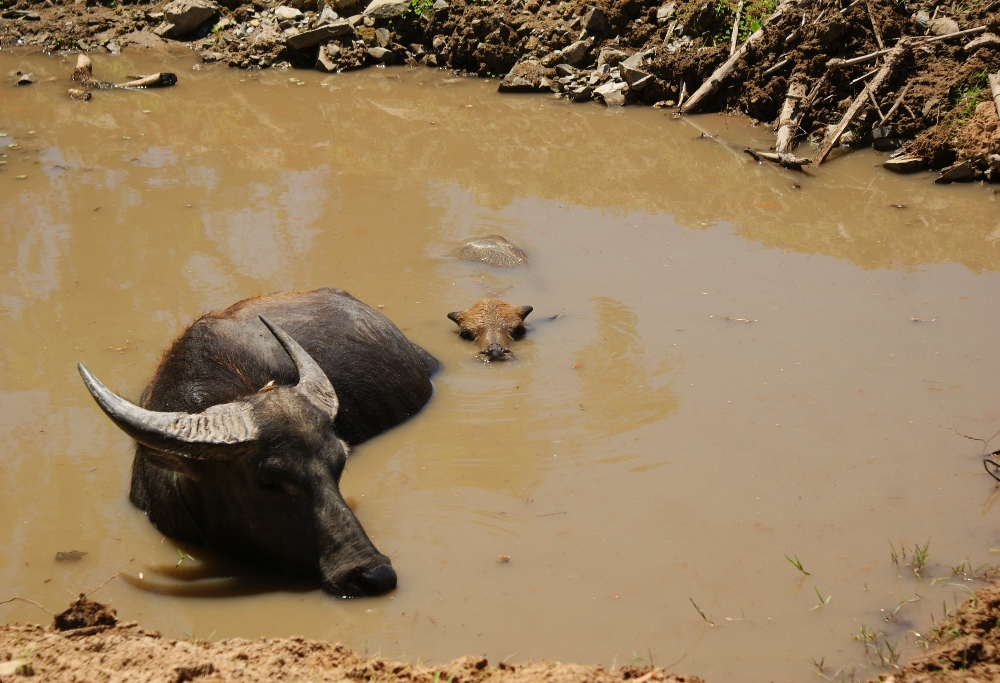 Water buffaloes cooling down in a pond 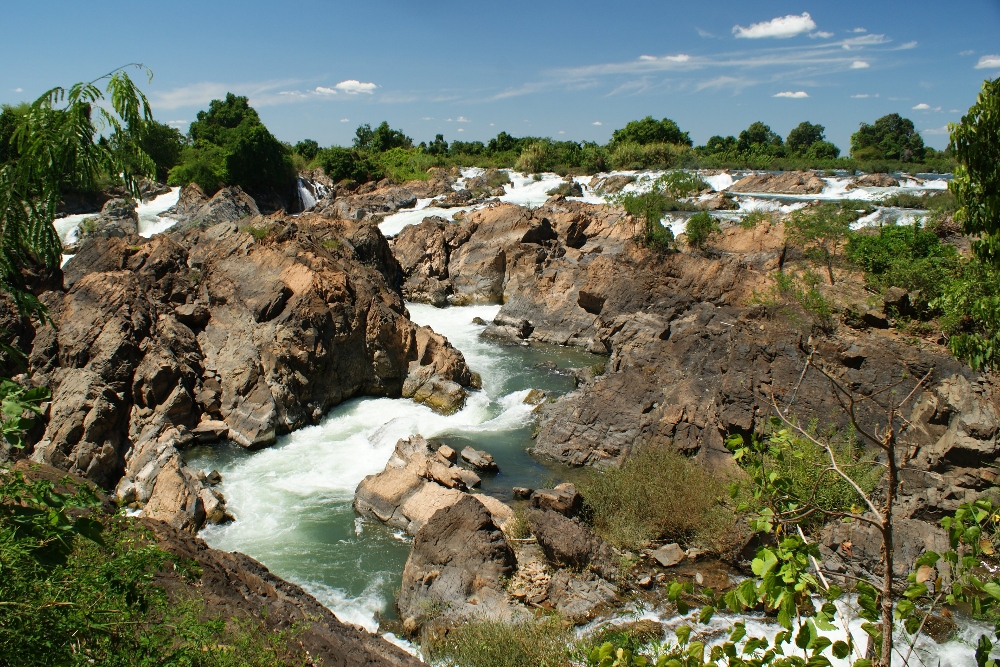 Water accumulates furiously below the edge... 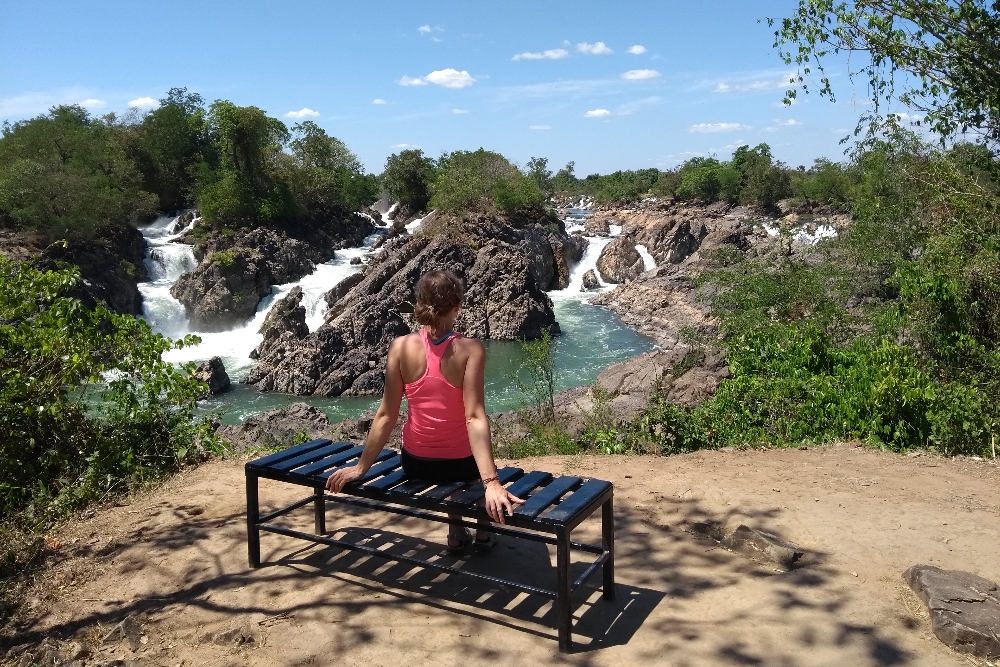 I found a place where time passes slowly :D I could sit on this bench all day long... 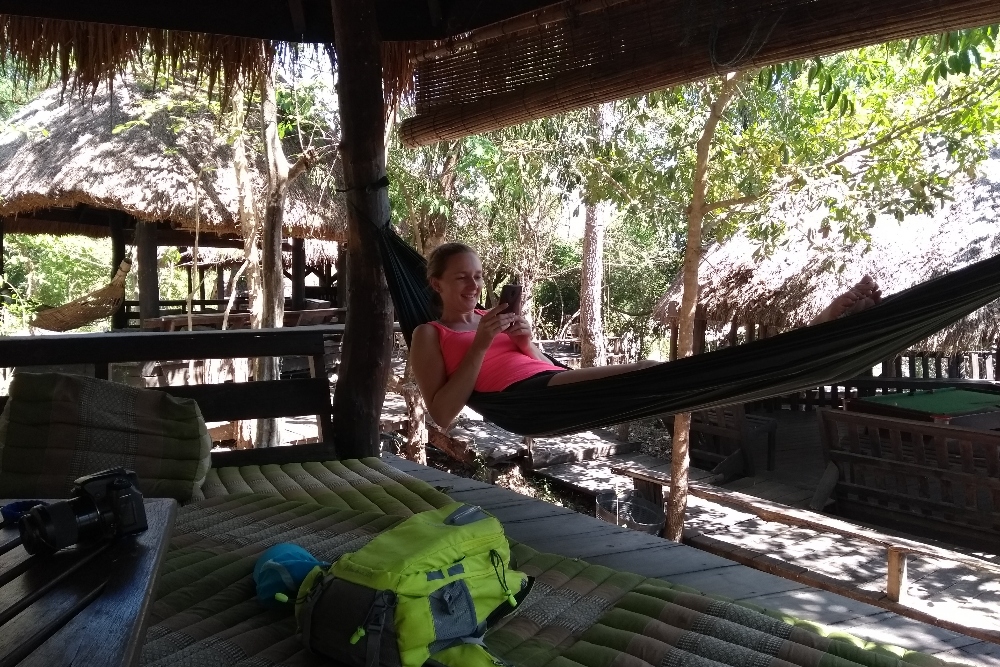 Chilling out in the shadow of the bar, next to the beach 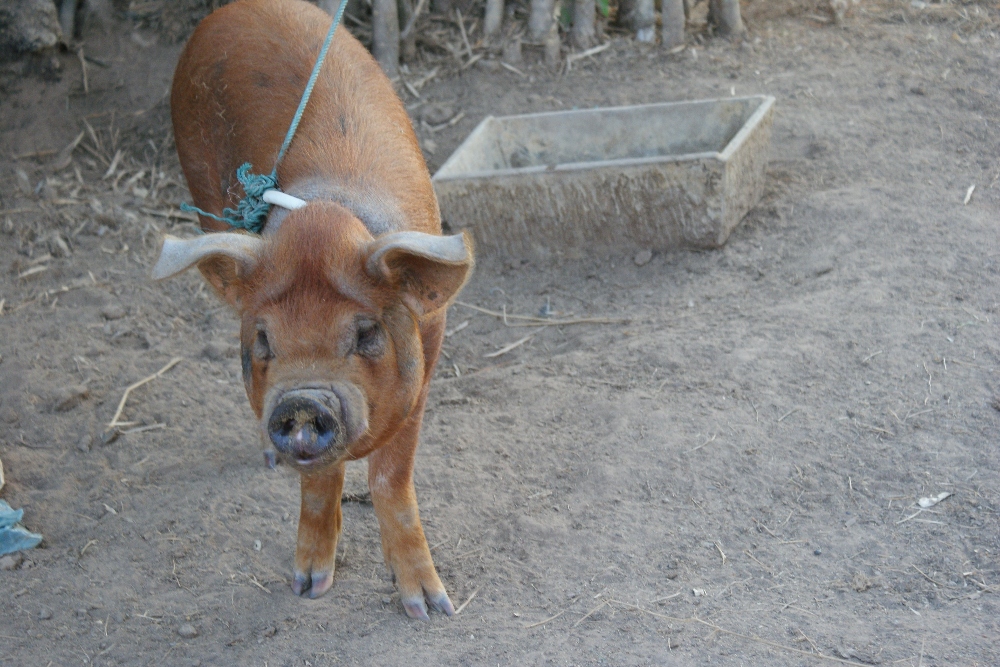 It is common to have a pig on a rope instead of a dog in front of a house. As you can see, they adapted to strong sun by darker color of the skin and hard soil by having a massive snout 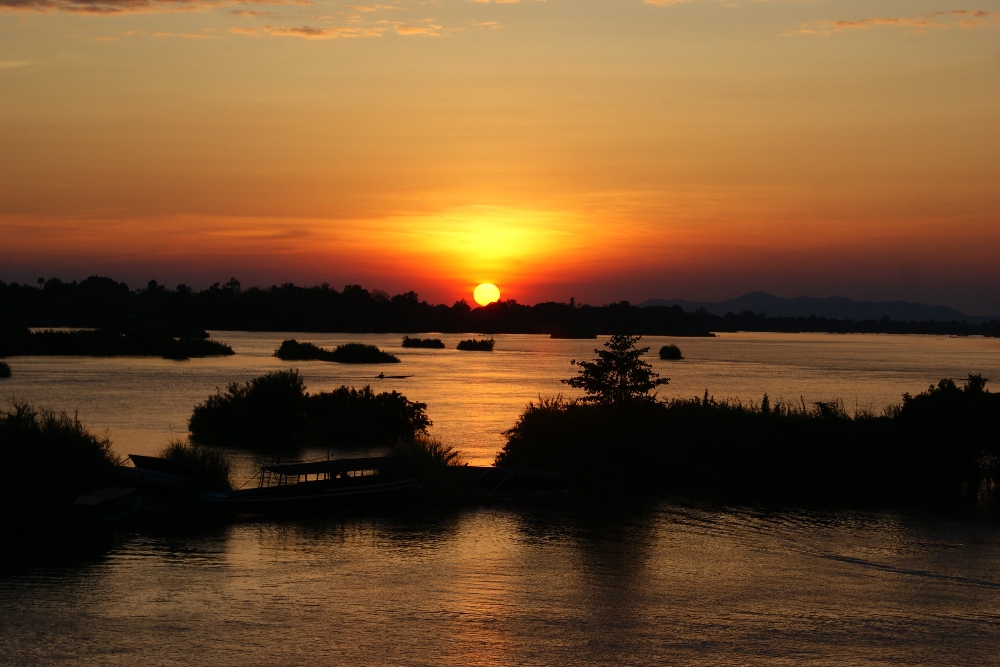 The sunset view from our guesthouse, truly amazing! :D This region is well-known from the best sunsets in SE Asia. What do you think? 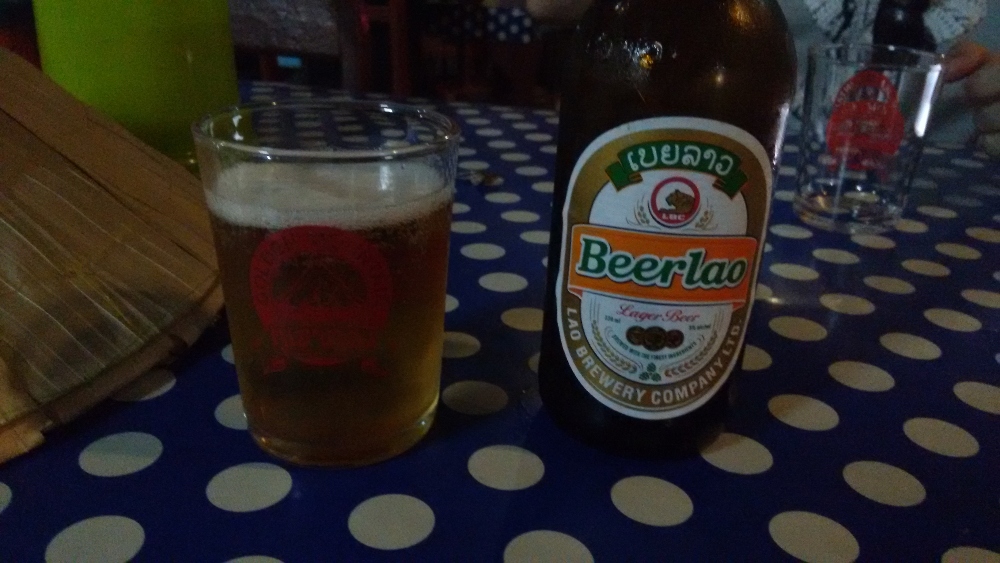 Here I discovered the best beer in SE Asia :) Perfect to drink while admiring a sunset! 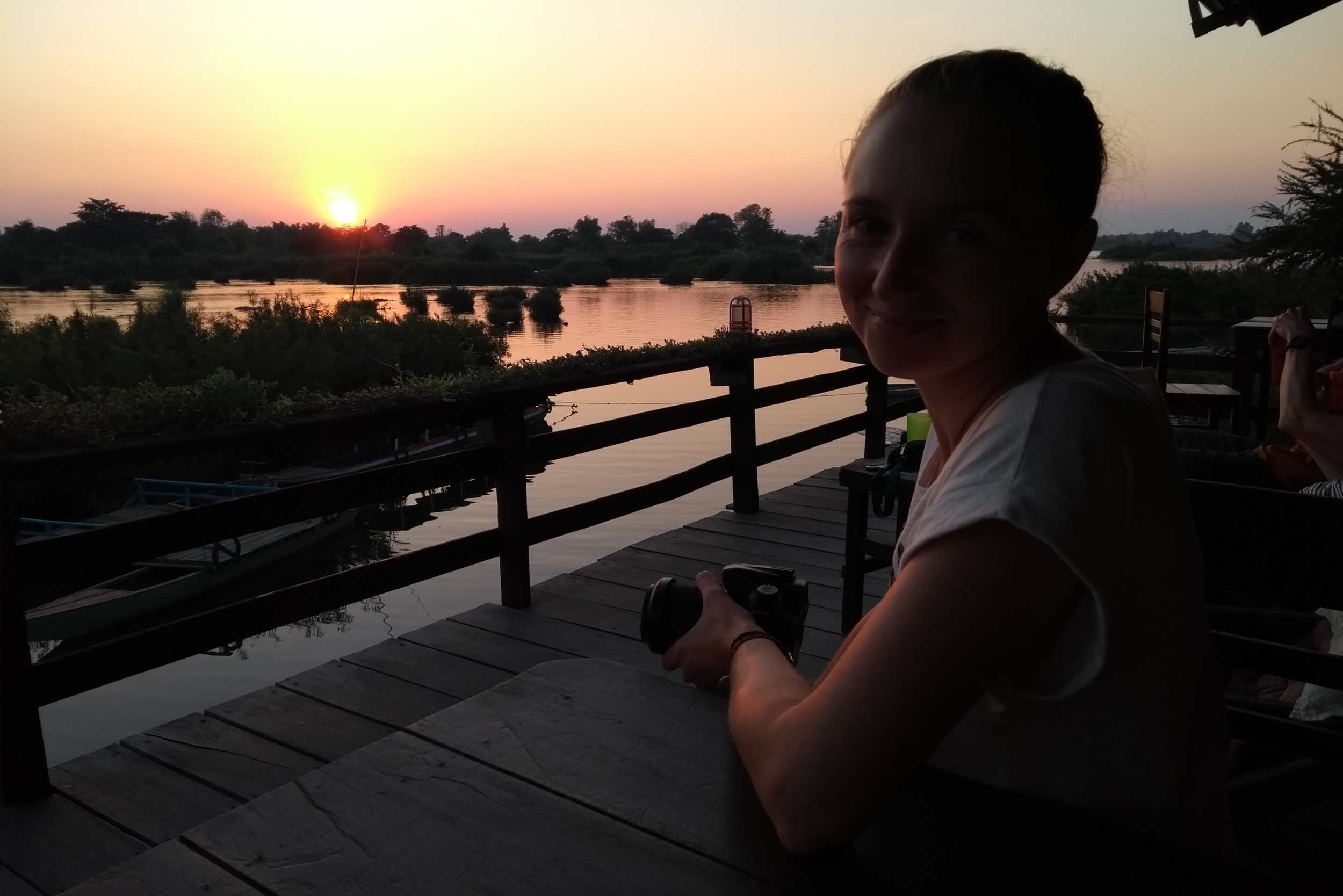 We really like the character of this place and relaxed atmosphere so it was difficult to leave this place. We experienced many power cuts in the evenings, owners of the restaurants were ready for such a possibility and immediately put a candle on the table what made an atmosphere ever better :)

Our next destination was Vientian, the capital of Laos but how to ride almost 850km? :O If you want to make it in one go, be ready for a boat ride, 2h bus to Pakse, then night bus (12h) to Vientian. It didn’t sound appealing to my boyfriend who is tall and always has difficulty to be comfortable on the bus. In one of the offices we bought a bus ticket to Thakhek, where we decided to spend one night and split into two parts this long distance to Vientian. If you want to know about problems we encountered during the journey, check upcoming post :)

Share:
Previous: Yummy! Cambodian cuisine a well-kept... Next: Vientiane, capital with an endless...