Pi Mai Lao, celebration of the New Year in Laos during the hottest part of the year was an unexpected event we gladly joined :D Officially it is a 3-day celebration but in some cities like Vientiane or Luang Prabang it can last over a week. During the New Year celebrations the entrance to all temples is free.

That day we decided to visit Pha That Luang, a large gold-covered stupa; a national monument and the symbol of Vientiane. We again used the public transportation to get to this part of the city (bus nr 10 from the crossing near the central bus station, we found the correct bus stop based on the map with information on the central bus station). 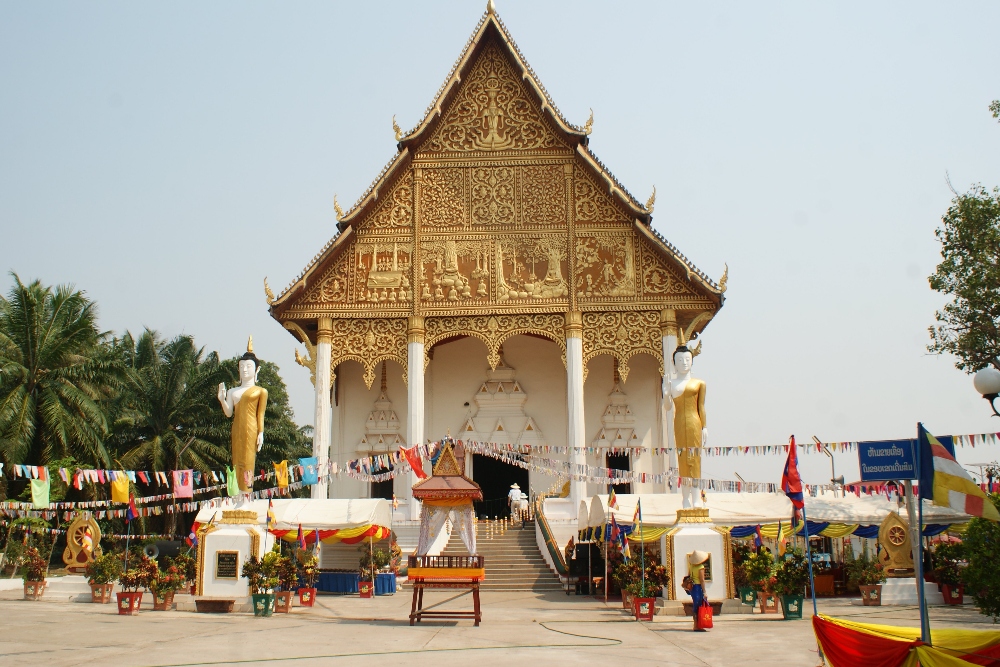 Buddhist temple nearby the stupa 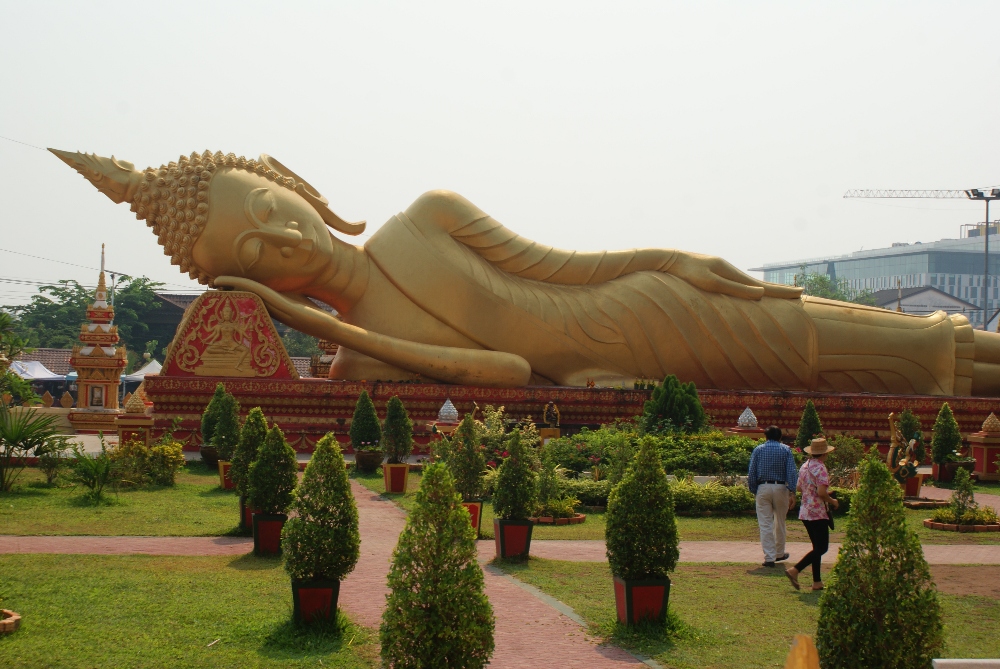 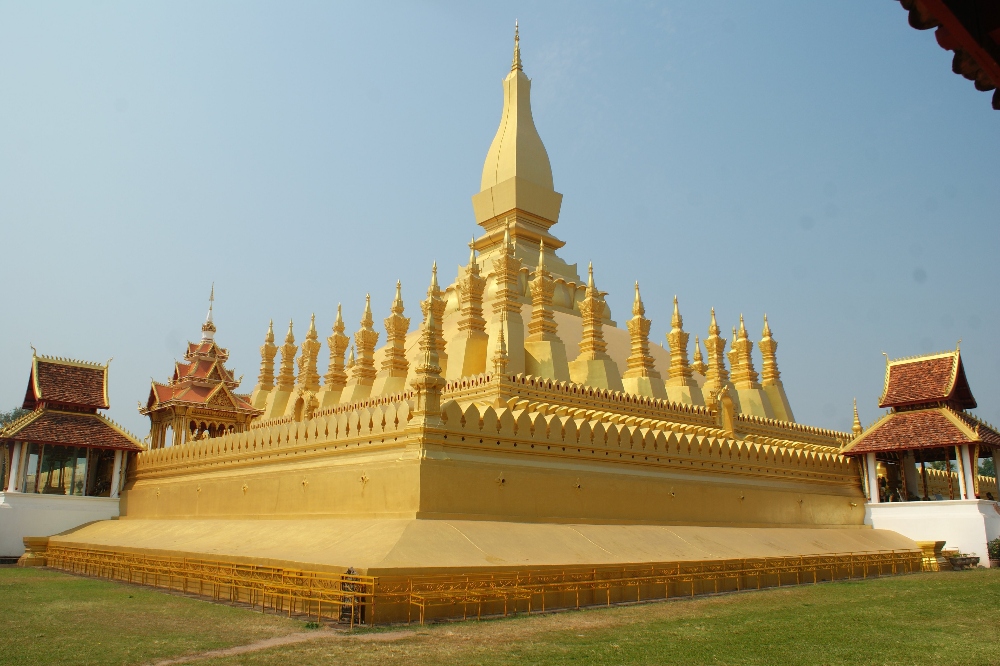 In front of each temple, Buddha statues are placed in easy accessible places so devotes can pour scented water with flower petals over the statues. It symbolizes washing last-year’s sins away since the first day of celebrations is the last day of the old year. Everyone wants to enter the New Year without any sins. Then, they collect the water which runs over the Buddha and take it home to pour over other members of the family as a blessing. 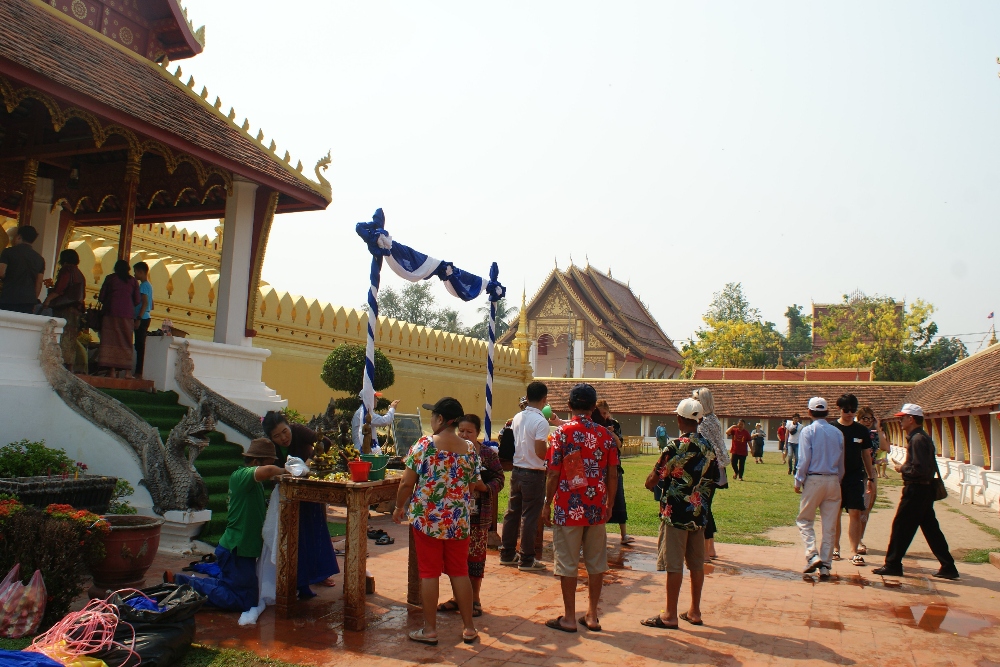 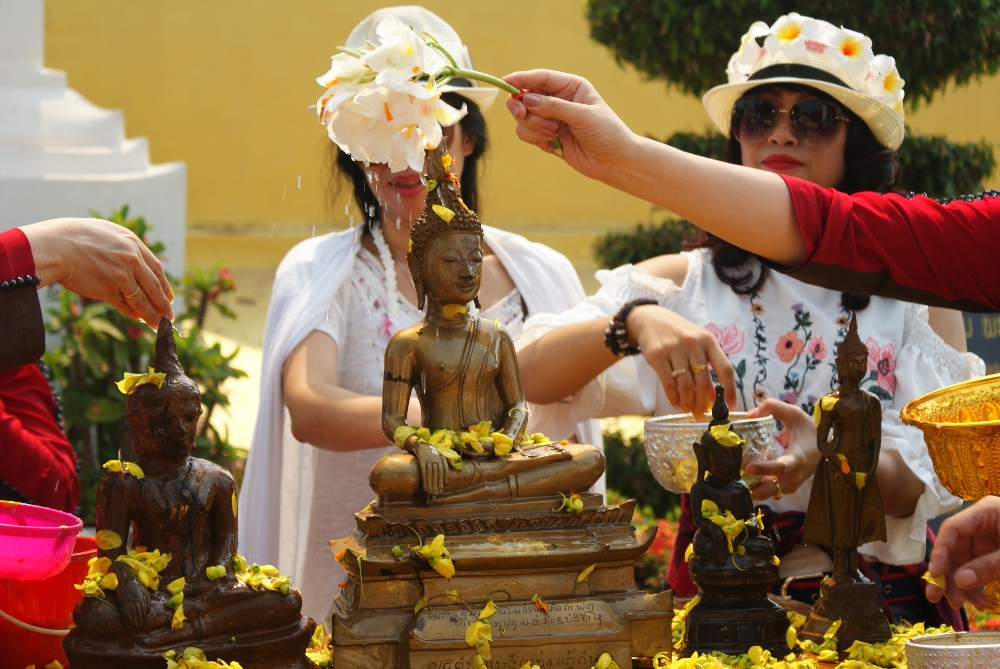 Everyone was dressed in a very special way, floral shirts for men and beautiful long dresses for women 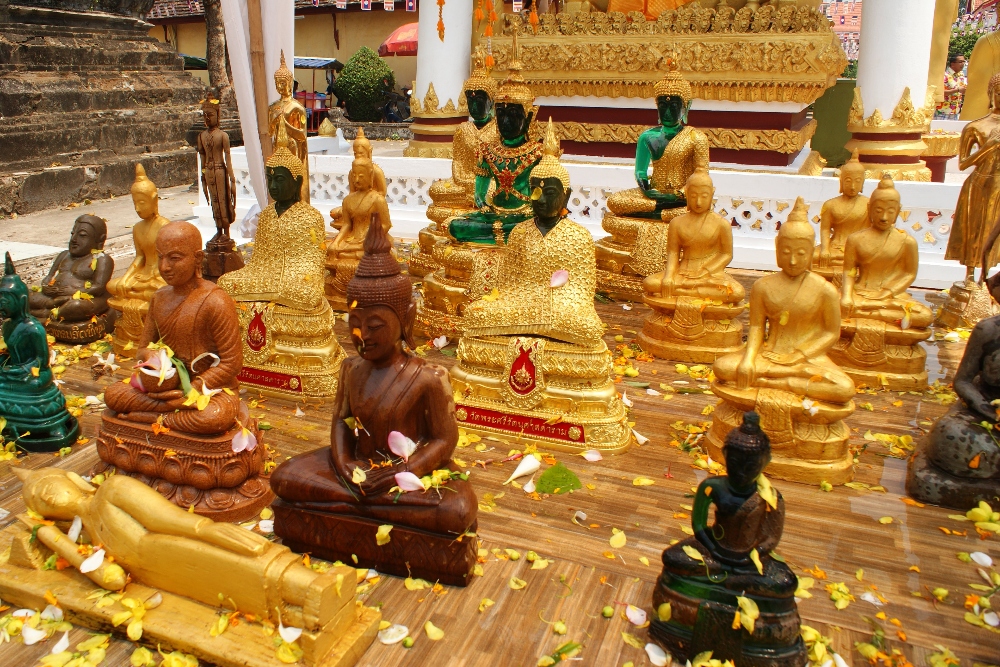 As you can see, the jade Buddha statues wear various robes for different seasons of the year (covering the statue at the different levels) 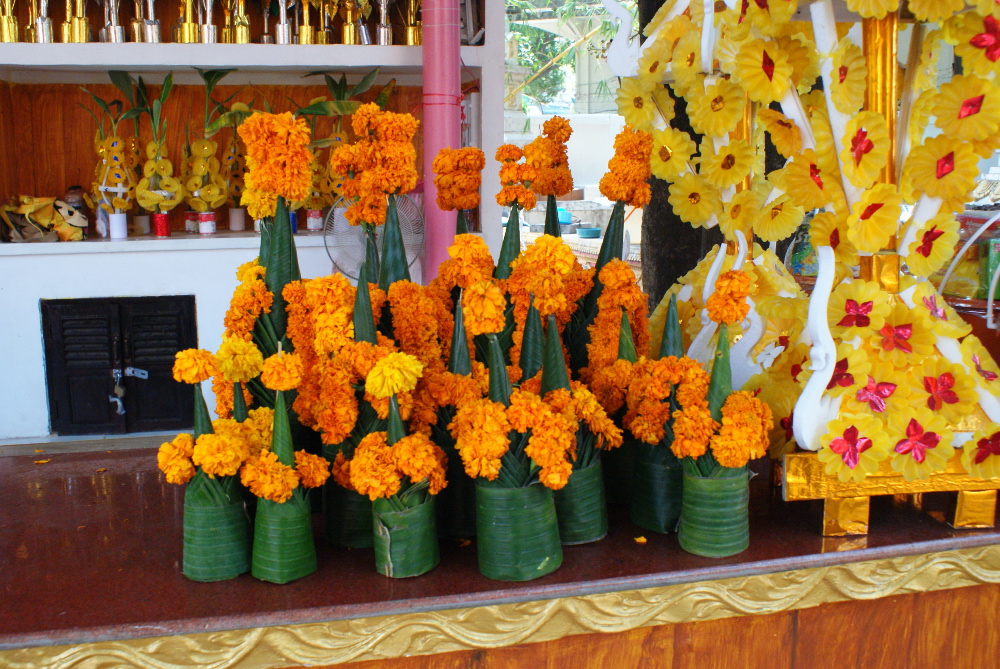 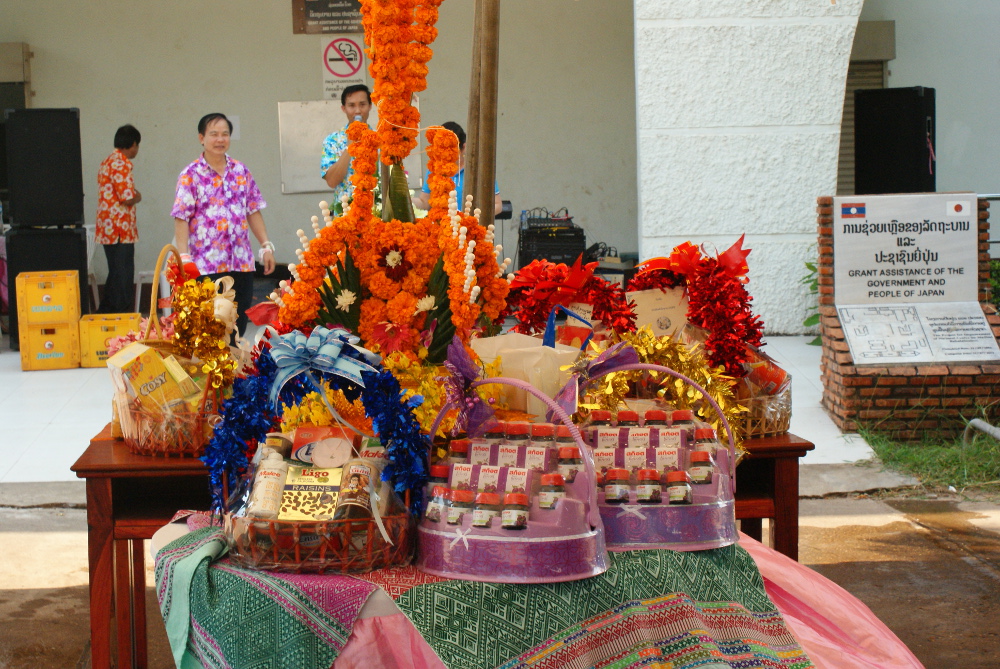 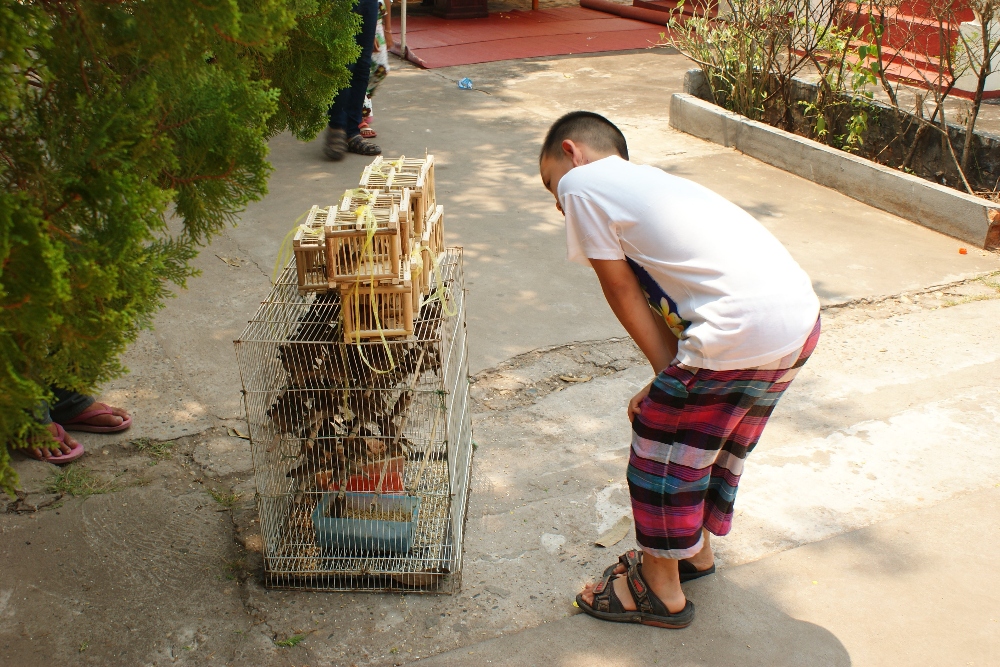 Some people sell birds in the bamboo cages, intended to be set them free as a symbol of a prosperity and good luck (we have seen a banners trying to discourage tourists from taking part in it). 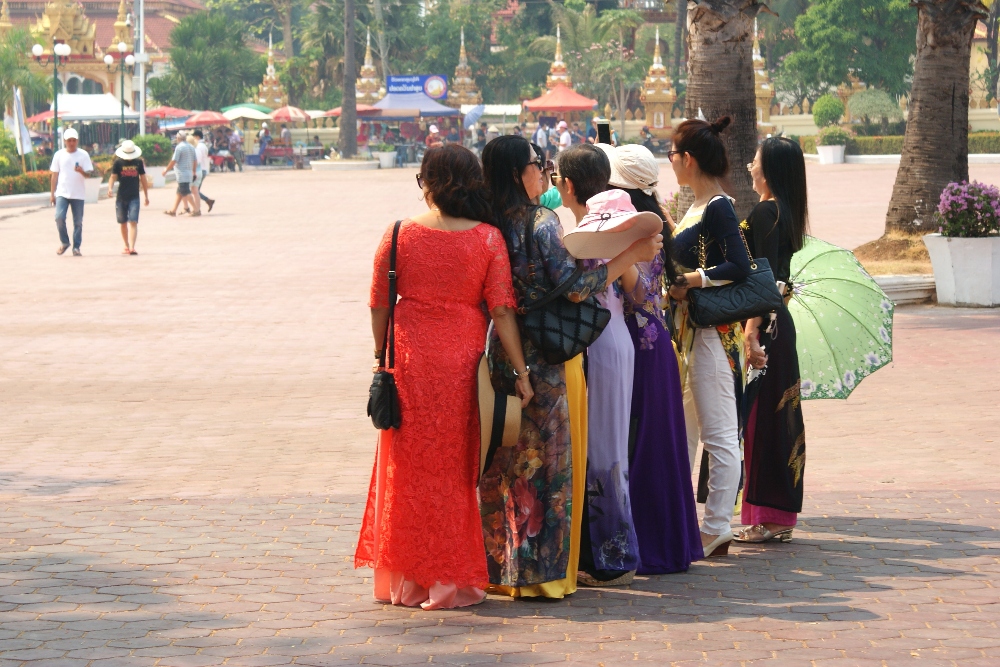 Beautiful, long dresses are a very important aspect of the celebrations :) 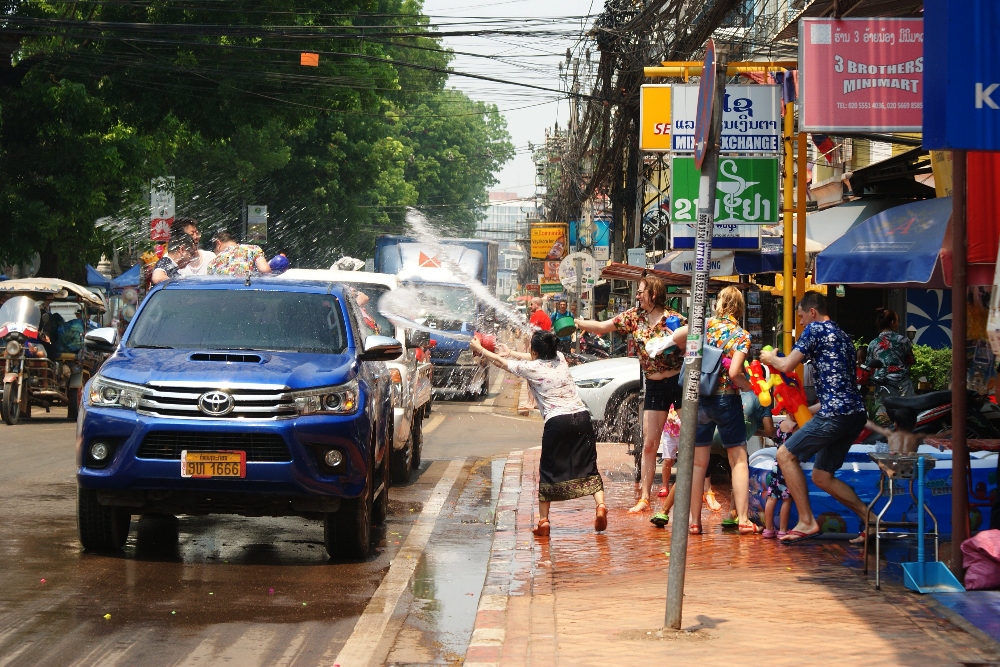 Since it was the hottest part of the year, people were pouring the whole buckets of water on each other, perfect way to cool down!

Already around a lunchtime people started to pour water on each other and few hours later all the streets turned to a giant battle field. Pickup trucks, full of people and buckets of water were appearing more and more often on the street so it was a time to switch from a normal camera to our waterproof GoPro :) We noticed in front of most houses inflatable swimming pools to cool down and owners waiting with hoses, water pistols and buckets to pour water over the pedestrians. No one could stay dry that day :D 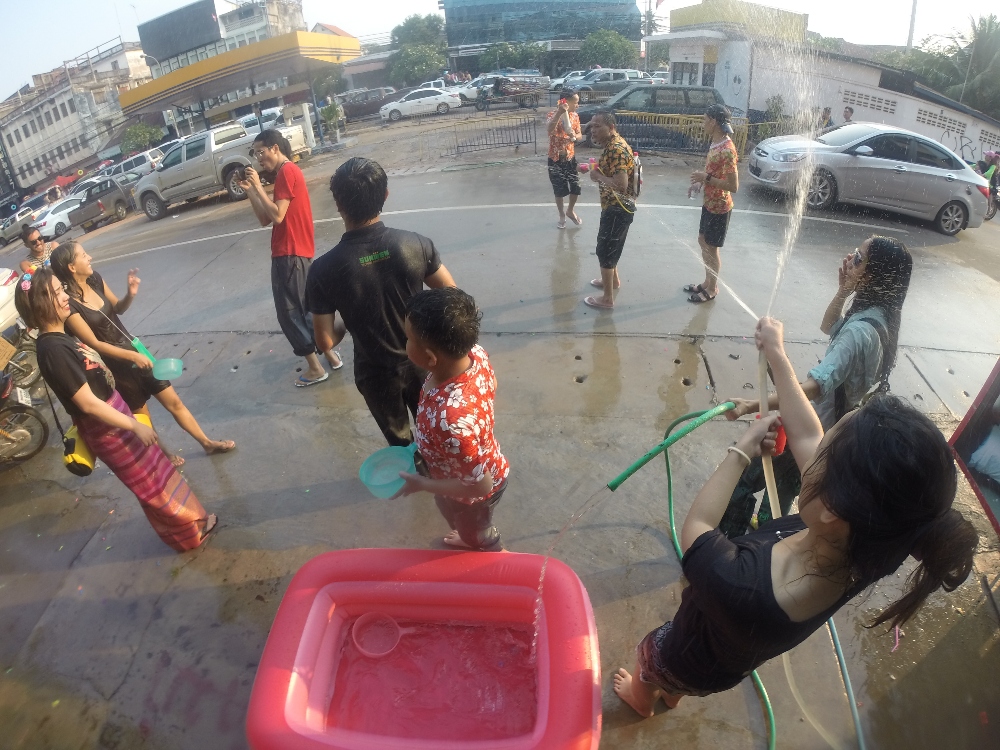 The owners of our guesthouse prepared delicious food, beers, lao-lao (Laotian rice whisky), loud music and a lot of water to make sure no-one who passed by  remained dry :D 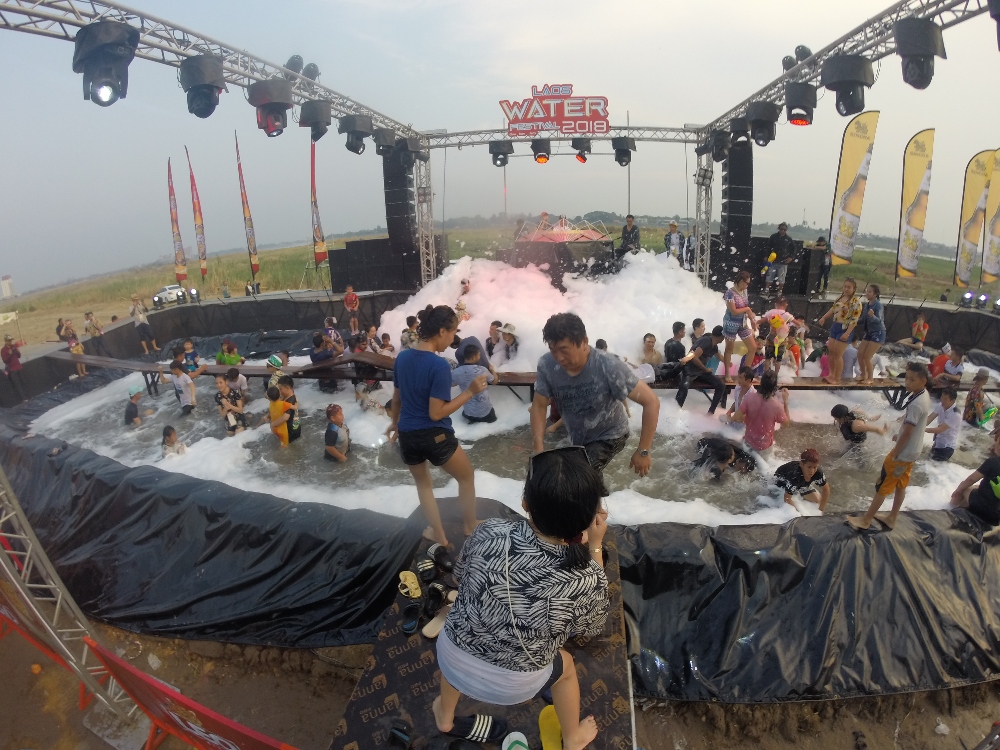 Along the promenade there were few stages where we could listen a Laotian music, dance in a foam or underneath the sprinklers. 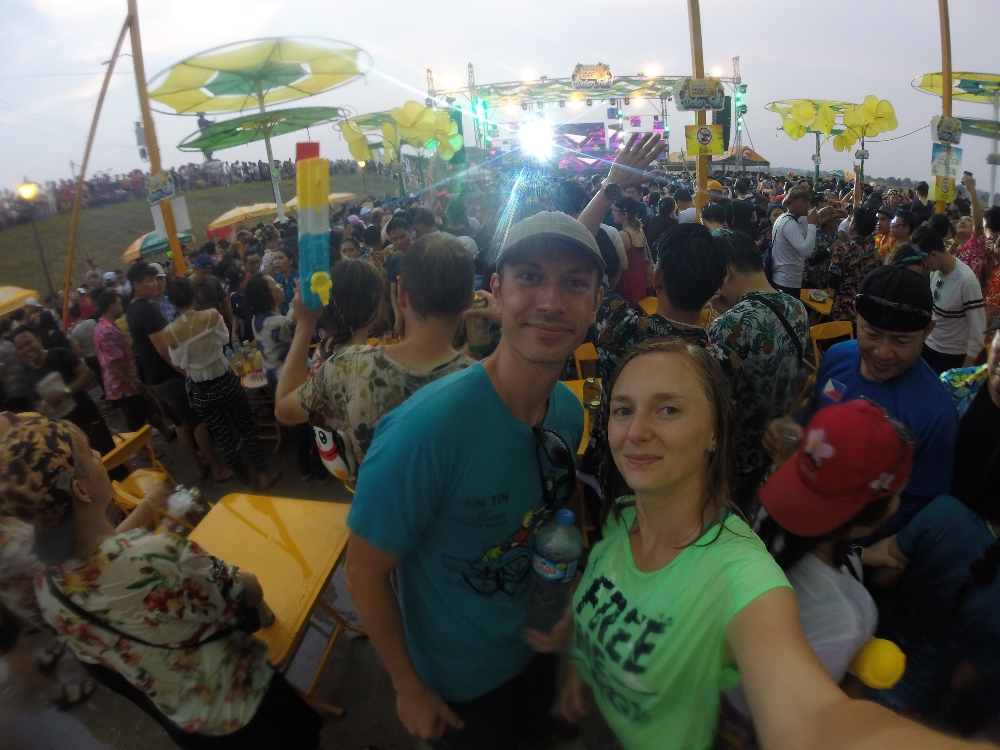 Laotian techno party which turned into Laotian pop concert a bit later. Probably some well-known group since everyone was singing along with the band :)

The second day of the celebrations is a day to relax, the one between the last day of an old year and the first day of a New Year (third day of the celebrations). We noticed that the owners of the guesthouse where we stayed were “very tired” in the morning :D We took the bus to Vang Vieng, this wasn’t easy since only one company was operating during a holiday (the price was also somewhat higher than normal). It was difficult to stay dry during the next days, there were always many kids along the road, waiting to pour water on passers. Better get a good waterproof bag* for all your documents, electronics and money! You can buy them actually on the every corner of the street. Walking from the bus station to our guesthouse,  which was about one kilometer, was a very tricky task as we didn’t want to get wet. We had to basically look around each corner of the street and check if it was safe to go there. Being in a tuk-tuk was not helpful either, since whenever the tuk-tuks with tourists stopped, there were some kids with water running towards them to get everyone inside soaking wet :O

In conclusion, to survive the Laotian new Year celebration, get a waterproof bag, and feel again like a child and enjoy pouring water on the others! :D

Share:
Previous: Buddha Park in Vientian Next: Vang Vieng, getting closer to...