Kampot is located on the banks of the Kampot River with many restaurants and bars next to the water. Architecture of the buildings and many names of the restaurants and hotels refer to the time when this city was a French colony. This region is famous mainly because of pepper and salt production. Therefore, visiting a pepper plantation was “my number one thing to do” in Kampot. I couldn’t wait to discover how the one of world’s best peppers is grown here. First we had to find a way how to get to La Plantation. We don’t have a license to drive a scooter, it likely wouldn’t be a problem to rent one anyway, but in case we have an accident, our health insurance company will not pay us back a coverage as we were driving illegally. Not worth the risk! That’s why we usually rent bicycles or go by tuk tuk. This time after short negotiations we hired a tuk tuk driver for half a day (15$, starting price 25$). We got there by dirt road (18km ride), passing many villages and Secret Lake which was actually also visible from the pepper plantation. Travelling by tuk tuk gives you a great chance to be really close to the passing houses and people what I really enjoyed. The road was really bumpy and dusty so sunglasses (which I didn’t have) are really helpful to avoid having red eyes afterwards. With the speed of around 30km/h, covered with the thick layer of a dust, we reached our destination. You don’t need to make a reservation to visit this place but just wait a moment until sufficient number of people gather and the tour can begin. Our guide welcomed us with the sentence: “I will let you try and then I will let you cry, not because of me but because of pepper”. 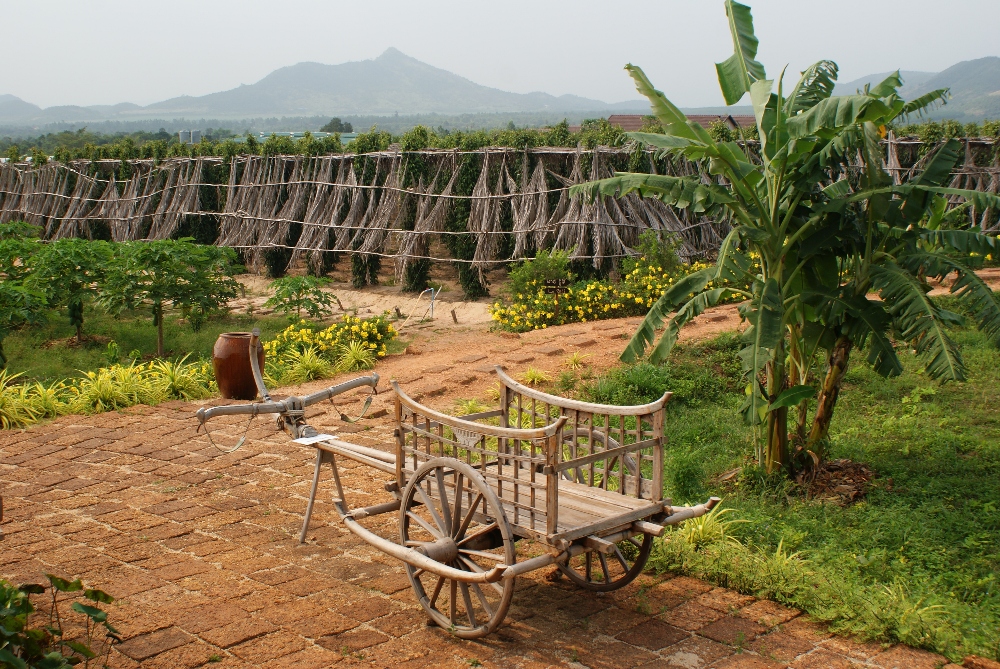 In the middle of the photo wooden water-buffalo pulling cart 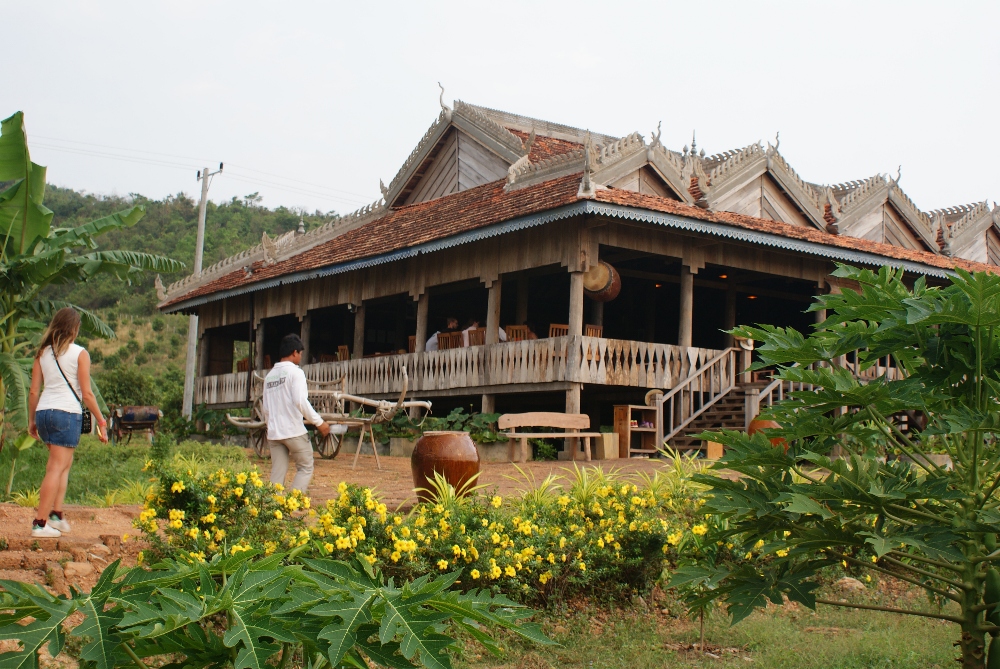 Khmer traditional houses, main building with the shop and restaurant inside

At the beginning of the 20th century pepper produced in Kampot province was exported mostly to France. During the civil war in 1970s the production of pepper was abandoned and the owners of the lands came back and start growing it again around 2000. La Plantation is running by a Belgian-French owners who started this project in 2013 after they found out the soil here has perfect quality, sun and sea breeze makes a climate really exceptional. The production of a pepper is expected to reach 80 tons in 2018. 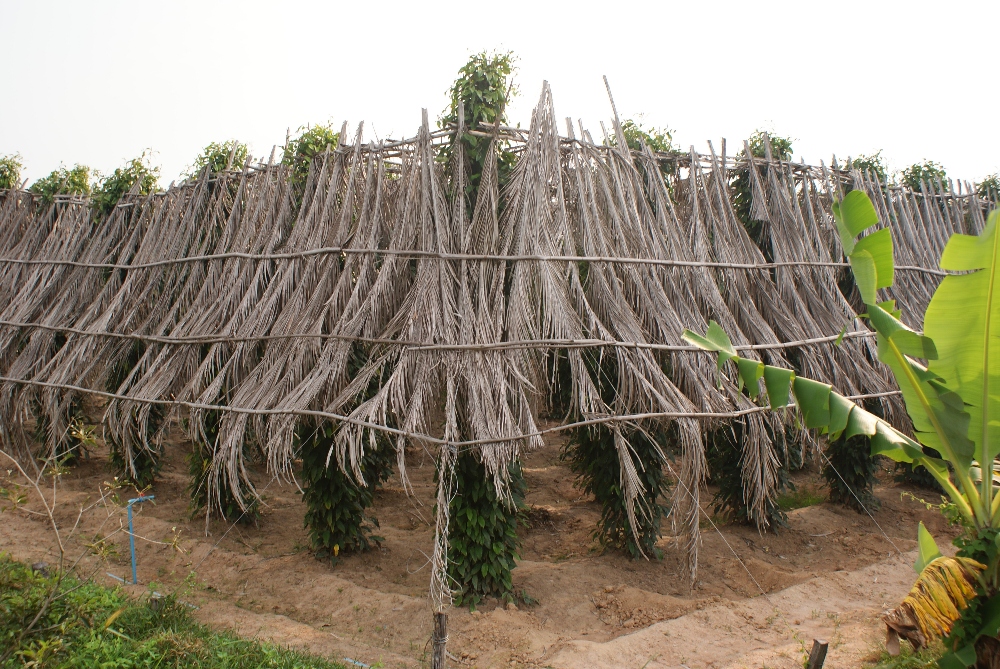 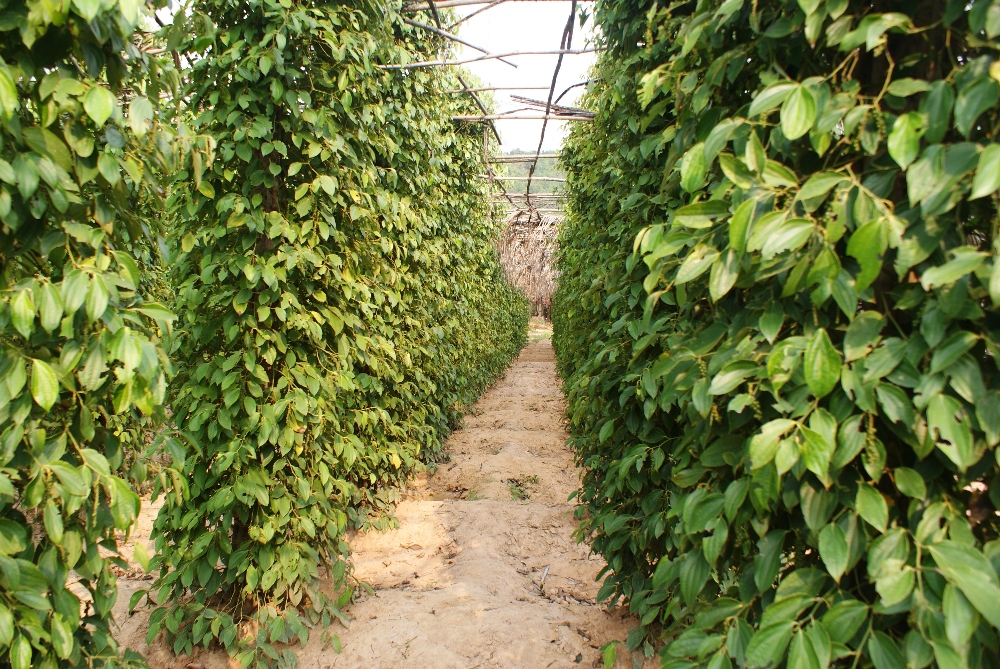 The basic steps of pepper production are: harvesting, selecting by hand, washing, boiling and sun-drying for a few days. Green pepper berries are collected to dry  for about 2-3 days and become a black pepper. When the pepper berries ripe, they turn color into red and these after drying process become a red pepper. This pepper is less spicy than a black one and has a fruity aroma. When the outer coat of red pepper is removed by soaking berries for 1 night in water, another type of pepper can be created, white one with very delicate aroma. The pepper plant grow along a tall wooden poles. This place produces a very unique product, salted pepper which is a product of fermentation process of non-mature green berries (note from Sebastian: the salted pepper would be amazing with steak). As our guide said, we should not mixed different types of pepper like we don’t mix red and white wine :p It is also better not to cook a pepper but add freshly on the plate. 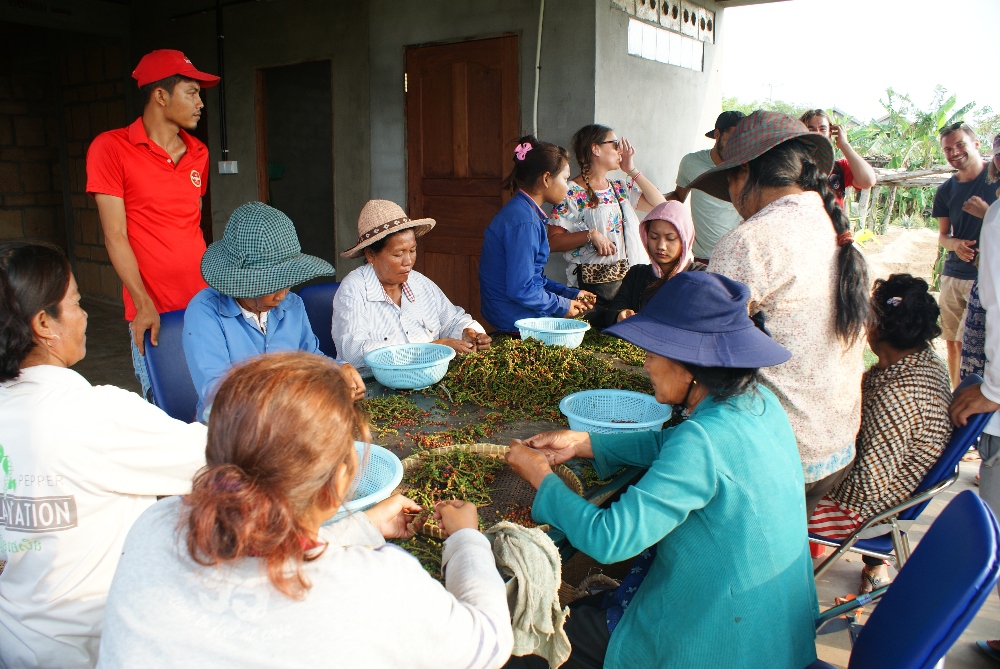 All work on the plantation is done by hand, no machines and chemicals are used (also only natural pesticides and fertilizers). We visited this place in the first half of March and it was a time to harvest red berries, corn by corn.

Nowadays, more than 100 Cambodian people work full-time on La Plantation what is a contributor to development of the local community. They also support local primary school, providing bikes for kids and school equipment and for the best students scholarships for a private secondary school are provided. During our stay we noticed really relaxed atmosphere amongst the employees what made our visit really pleasant!

After a guided tour on a farm we could buy some organic pepper from a small shop what we did :D The landscape around the plantation is amazing, you can see the Secret lake in a distance, and many fields with pepper and fruit trees. On the plantation people collect water during the wet season to use it for irrigation during the dry season. 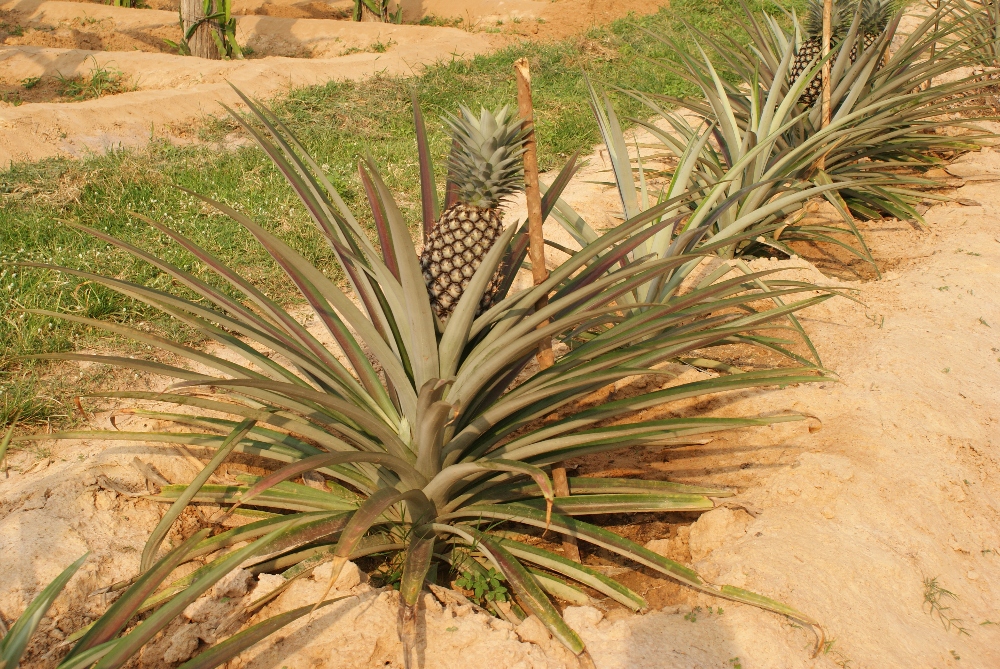 Pineapples really don't grow on a trees but from leafy plant. The one on the photo needed around one year to reach its size 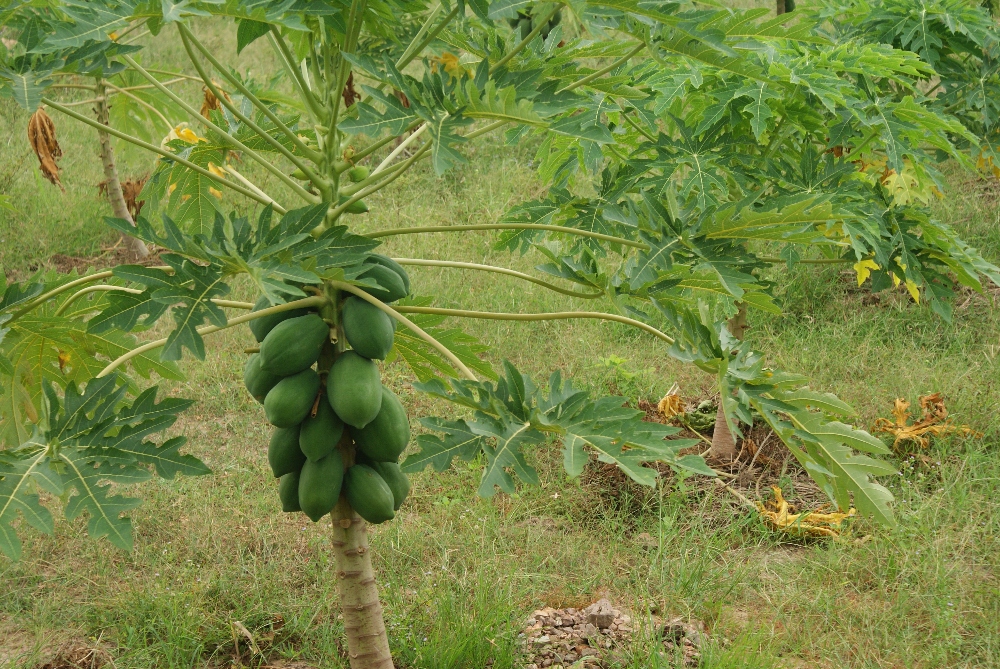 Papaya tree, when the fruits are ripe the surface of the shell have yellow to orange color 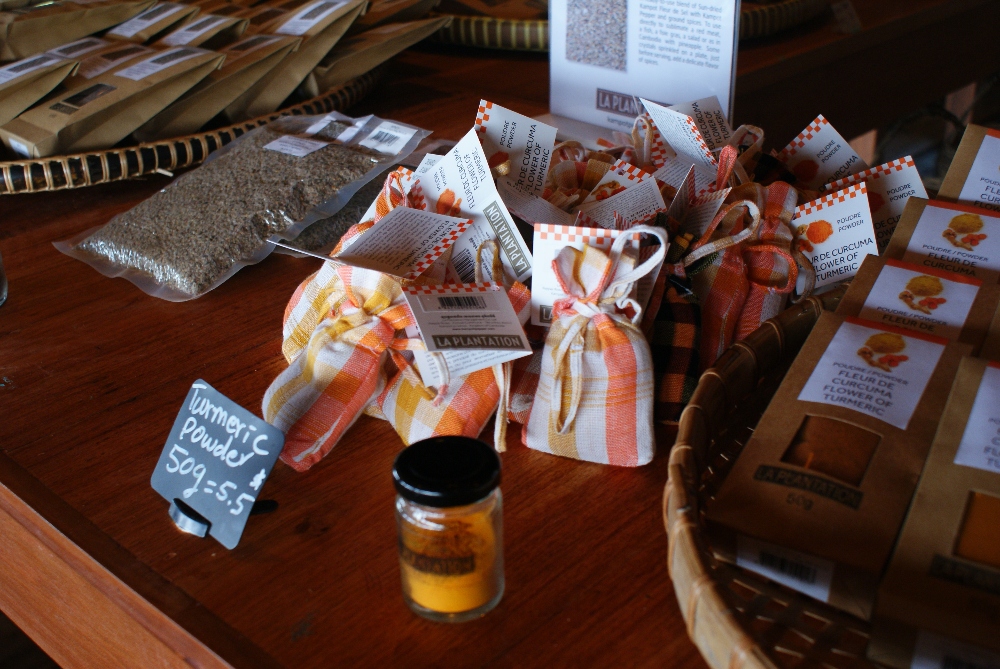 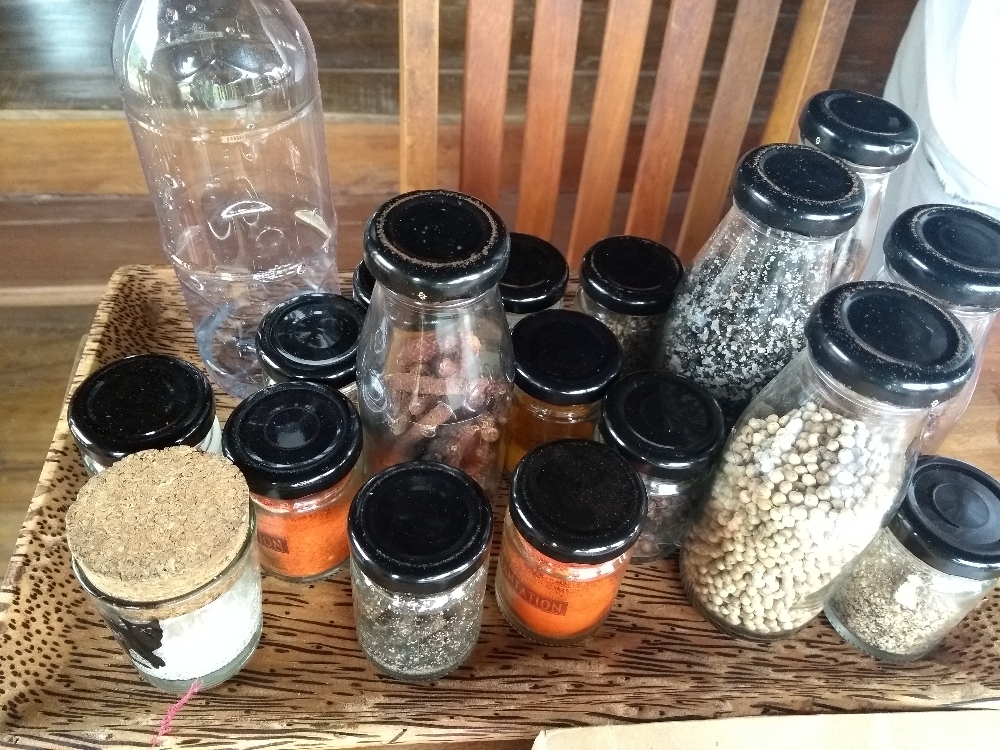 After short introduction about the history of the place, special certificates the products of the plantation have, and how the production process looks like, we started the practical part of the presentation, tasting. Good that we ordered some sodas at the beginning :) We were really surprise by the fruity aroma of the pepper. 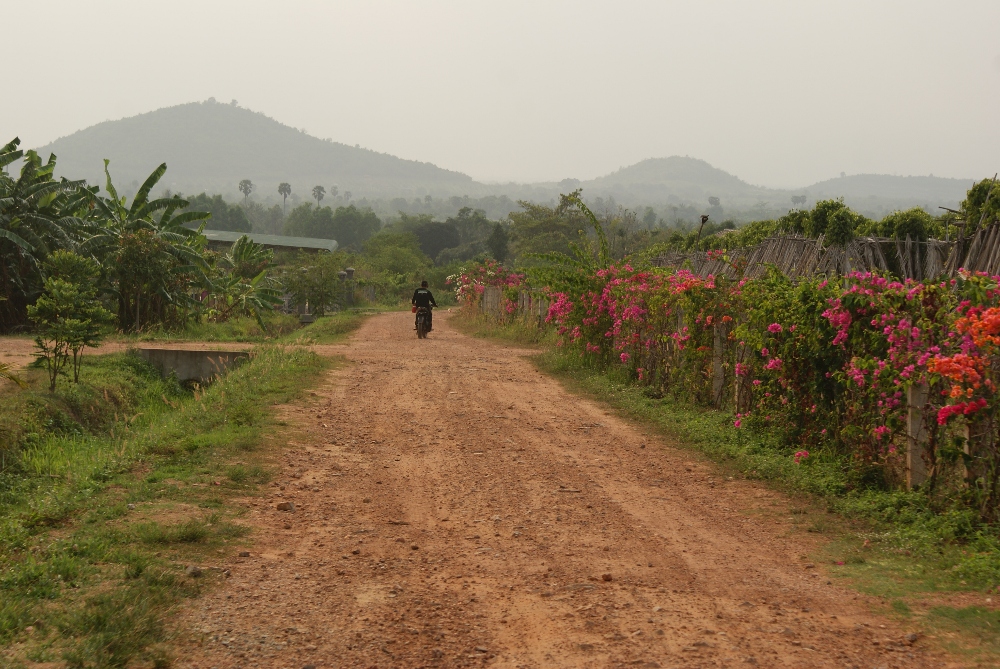 In the late afternoon, warm colors of the plantation...

On the way back to the city, we stopped for a moment at the salt fields. Unfortunately, this year the wet season came earlier and harvest of salt was already finished (usually dry season last until the end of April and we were there at the end of March). The water from the Gulf of Thailand is transferred into the fields and evaporates, leaving crystals of salt afterwards. There is also a small visitor center where you can learn about production process and buy some salt but now it was closed since the production was over. The salt is stored in a warehouses, then transported to the factories where is cleaned and iodized, packed and ready to distribute. 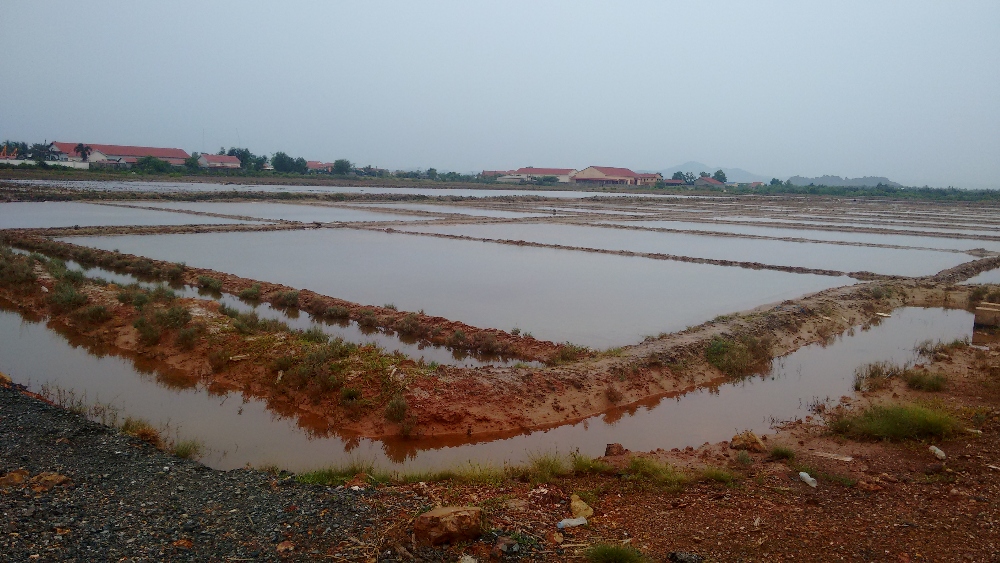 Next day, an half an hour bus ride gave us a chance to visit Kep, crab city. It was a perfect retreat destiny for a French elite at the beginning of XX century. Today, it is a pleasant, small town with nice hotels and quiet beach (perfect if you want to avoid the party scene in Sihanoukville). Just when we arrived, heavy rain forced us to find shelter for 1.5 hour in a restaurant near the bus station in Kep. 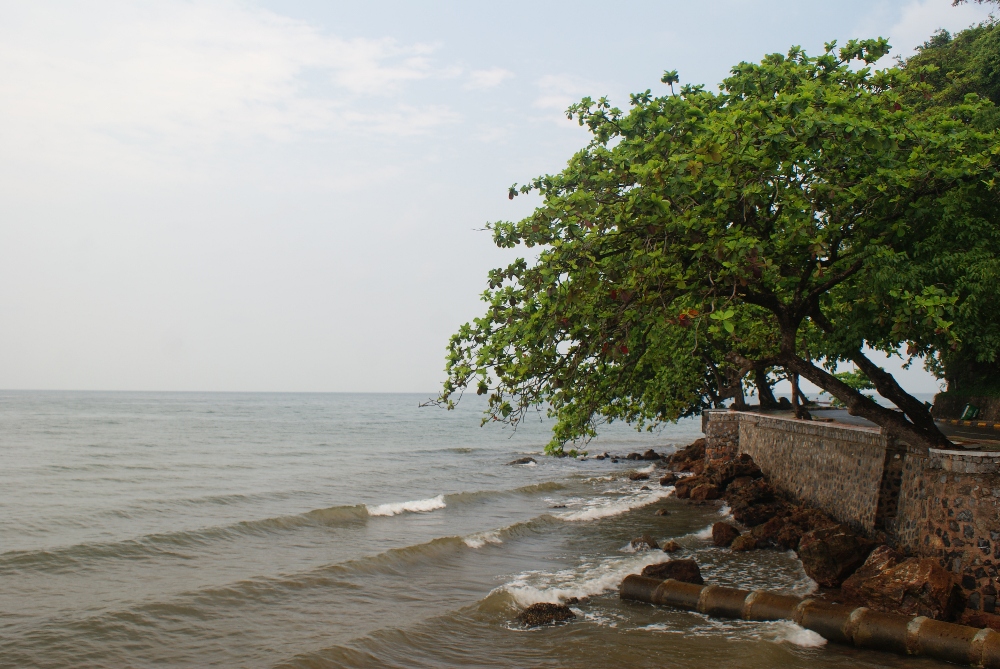 The temperature dropped a little bit and the sun started to come out from behind the clouds and that was time to check a crab market (near Sdech Korn Statue). You can buy here not only a fresh crab directly from the boat but also other types of a seafood (as well some ready to eat from the BBQ). Nearby restaurants offer a menu with a great variety of seafood with a famous fried blue crab served in the company of famous kampot pepper. 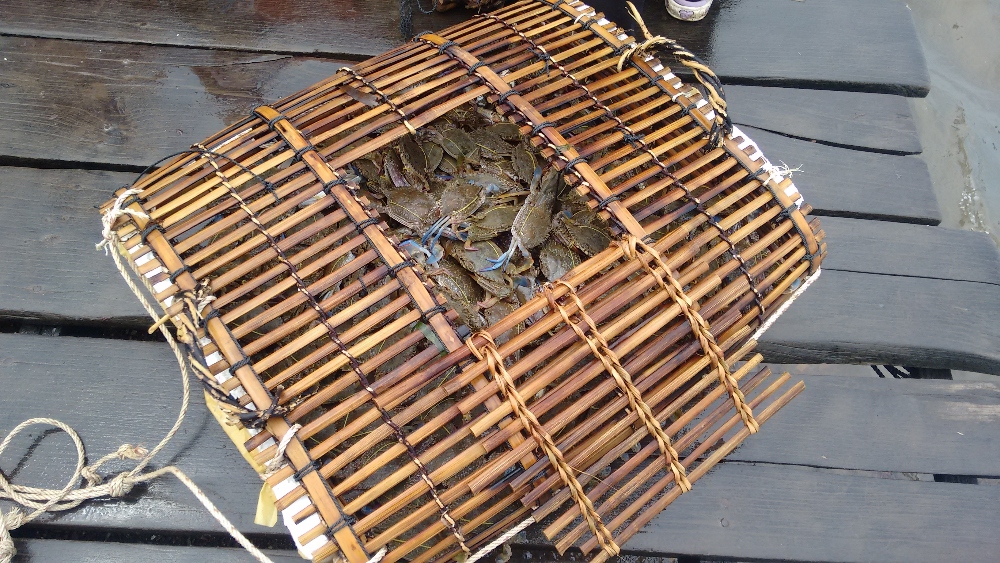 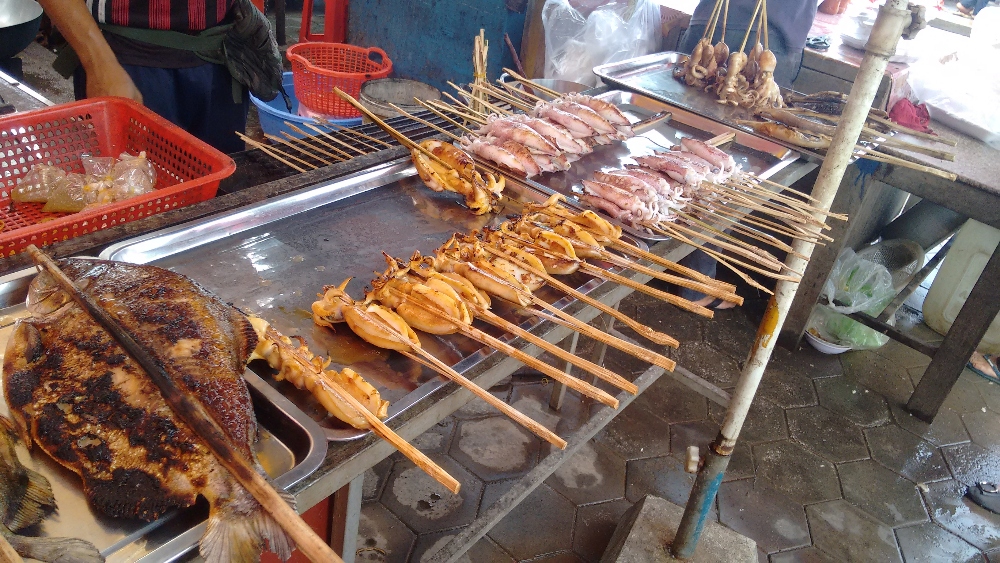 Giant fish, squid, octopus, many choices for a seafood lovers!

Since I don’t eat seafood, we decided to try some exotic fruits and our choice was rambutan (3$ per kg). These fruits start out green, then turn red, orange, or yellow as they ripen. First open the skin with the knife or fingers (spikes are soft), squeeze the inside part out, remove the seed and enjoy the translucent, white flesh. It’s really sweet and juicy fruit! 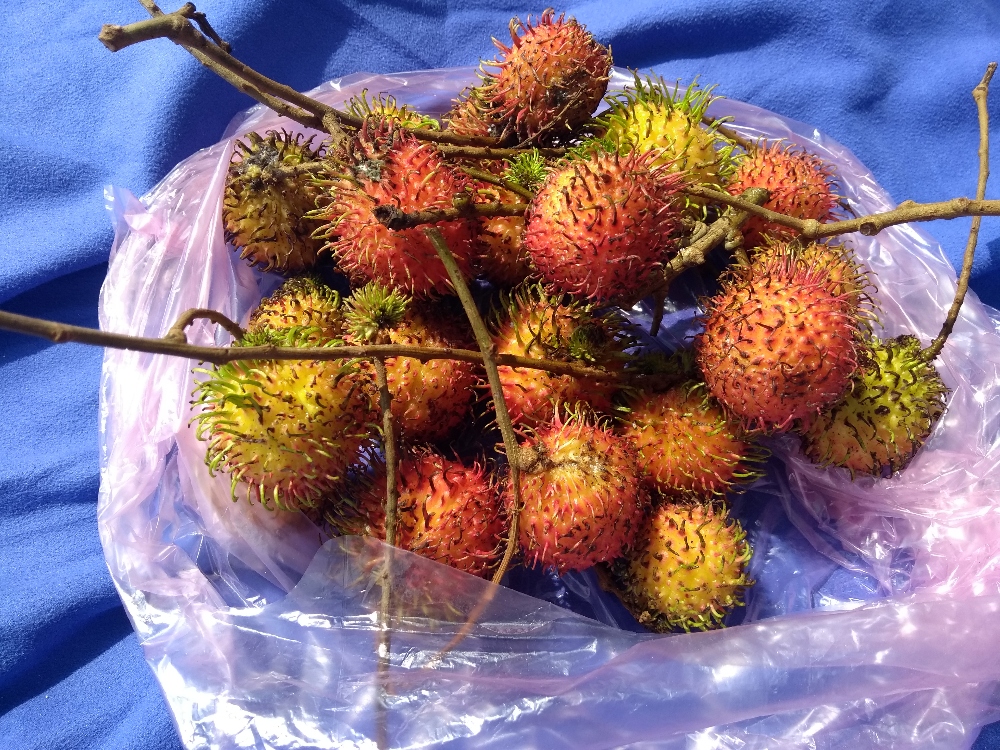 Full of hope that it didn’t get to muddy in the Kep National Park (established in 1993), we started to walk there, passing many nice looking hotels with the swimming pools. There was 1$ entrance fee to the park, however we paid 1.5$ for both of us and the guy counted us officially as one person (earning him a little extra money ?). We hiked the 8 km trail (also accessible by motorcycle) in a dense tropical forest full of exotic plants and beautiful butterflies. None of the snack bars we passed were open so we were glad to have enough water since it was really sweltering in the forest. 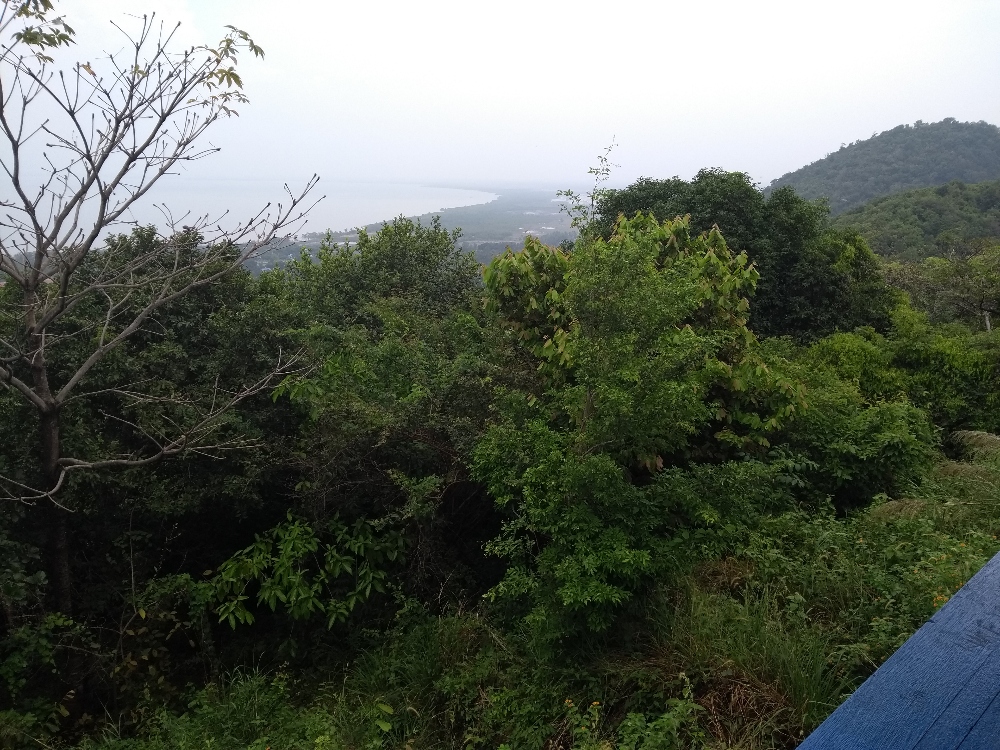 View of the Kep town and a seaside from the hill of a Kep National Park. Views were not spectacular since the jungle overgrown most of the viewpoints. 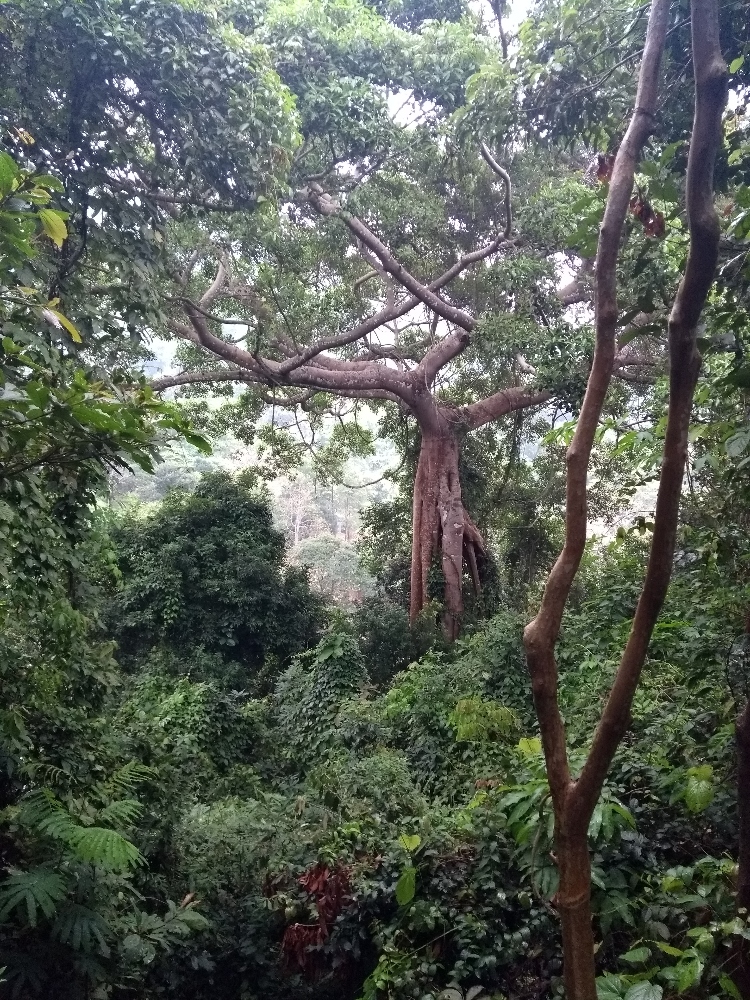 Fantastic jungle inside the park :) 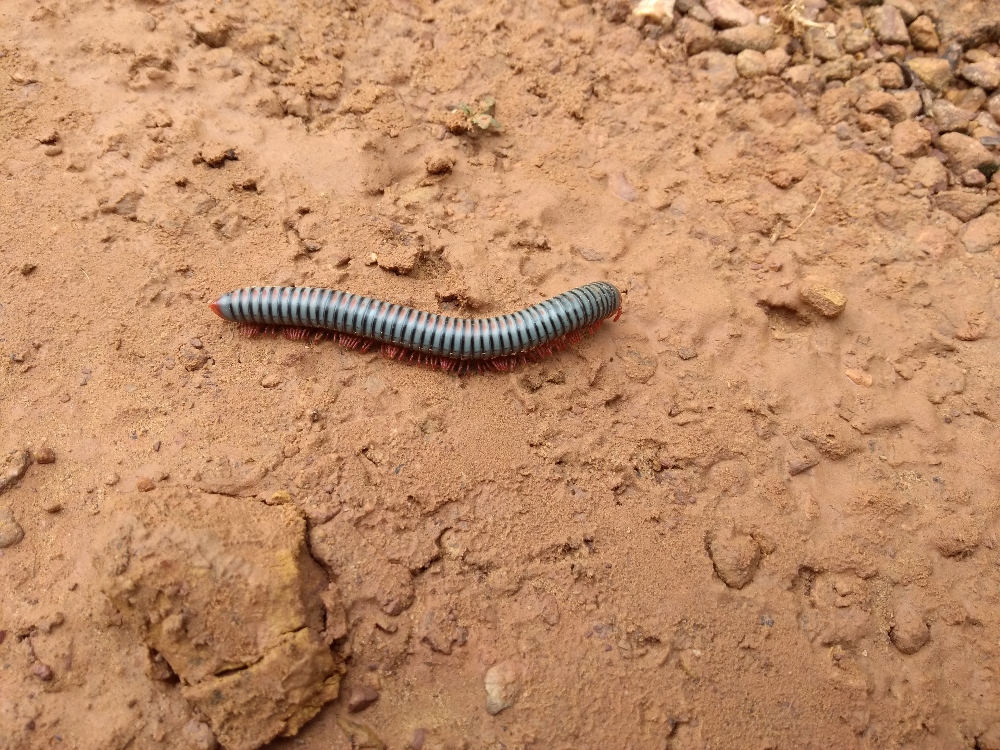 We ended up on the other side of the national park and headed back to the beach which was close to where the buses were leaving. Now we had time to lay on the sand, swim and admire the Vietnamese islands in the distance (it is only 20km to the Vietnamese border by land). As expected our bus arrived with more than 1 hour of delay, we really needed to accept the reality of transportation in Asia. 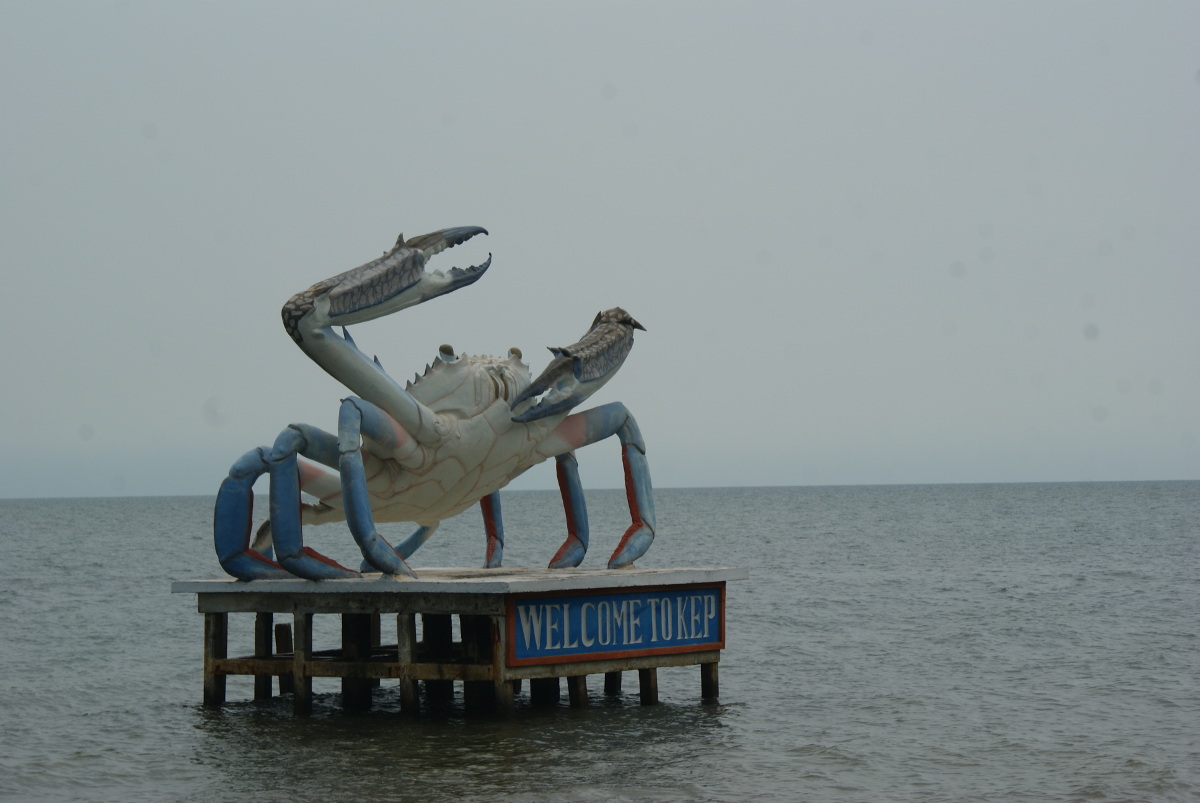 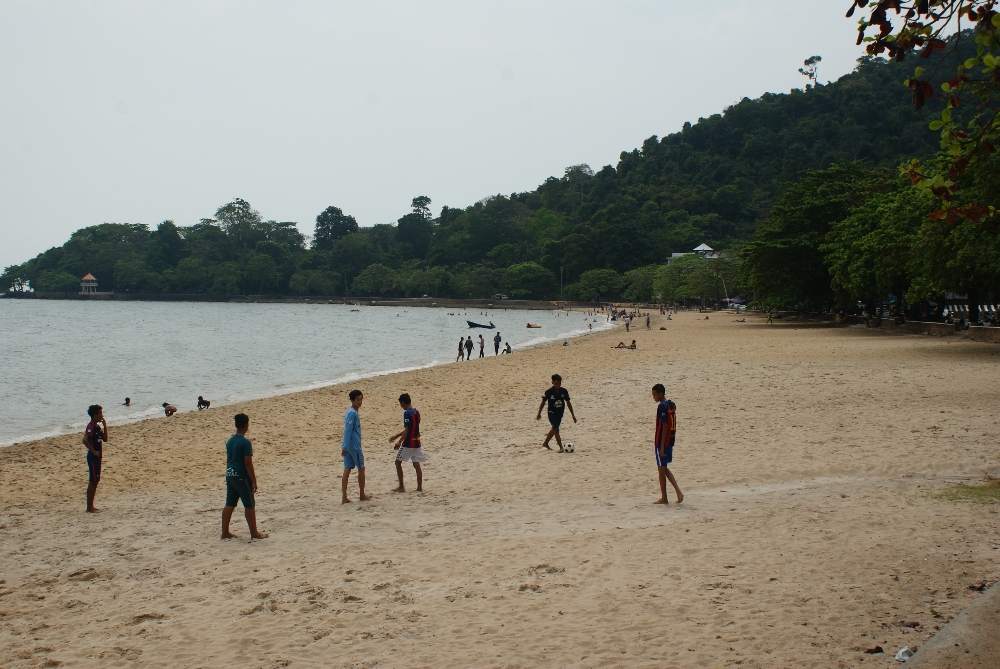 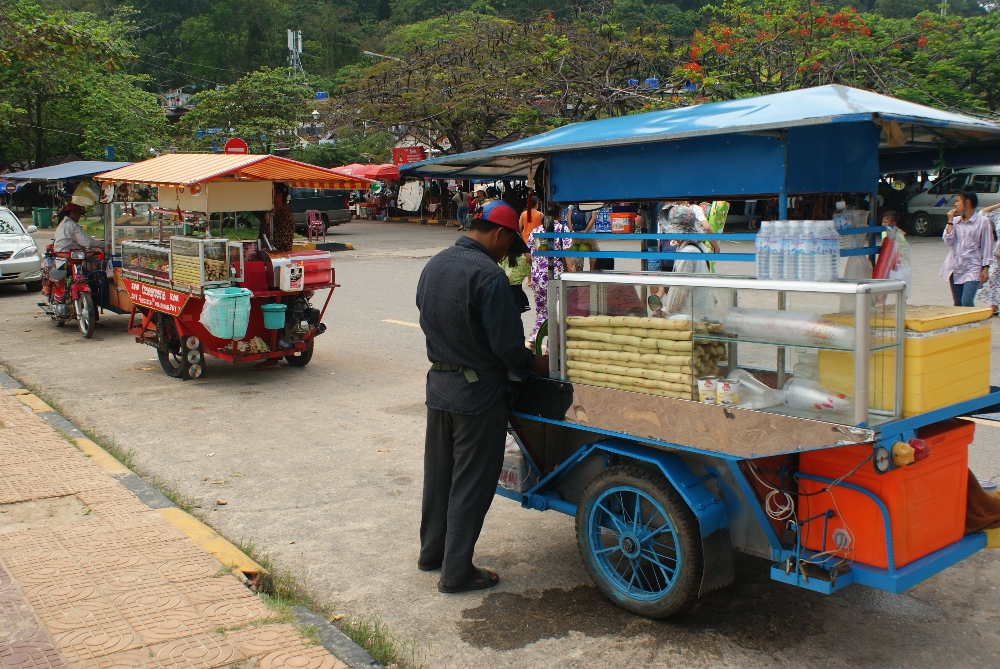 Food stands next to the beach, offering a freshly squeezed sugar cane juice and kind of crunchy pancakes served rolled in a shape of tube

Share:
Previous: How we ended up in... Next: Phnom Penh, capital of Cambodia...