The old wall of a medieval fortress made of red bricks and stone with the river slowly running in the background or maybe ruins of the abbey from XI century… these scenes for the unique pictures came to my mind while wondering about destination for the upcoming, sunny weekend. Photography is one of my biggest passions (besides hiking, running and travelling) and I always have some ideas for photos in mind before actually visiting the place :D I spend quite some time checking other travelling blogs and following travellers on instagram from where I get a lot of inspiration!

I just realized that it’s the first time I’m writing about Belgium and we live here for 2 years already! This summer we are travelling more locally because of travel restriction implemented by the government to reduce the spread of the virus. Luckily we bought a car in the spring this year (just two weeks before the lockdown when we both started to work from home) so now we are using it to make one-day trips, visiting also neighbouring countries (like the Netherlands if current situation allows to do it safely.

Namur was definitely one of the cities on my list to visit in Belgium after hearing about this place nice opinions. Located close enough from the place where we live to make spontaneous decision in the morning and go the same day. On the first photo below you can see Palais des Congrès (currently a congress center which was in the past a stock exchange), which we passed on the way to historical Citadel. The city center didn’t make a big impression on us but the best spots were still ahead of us :) 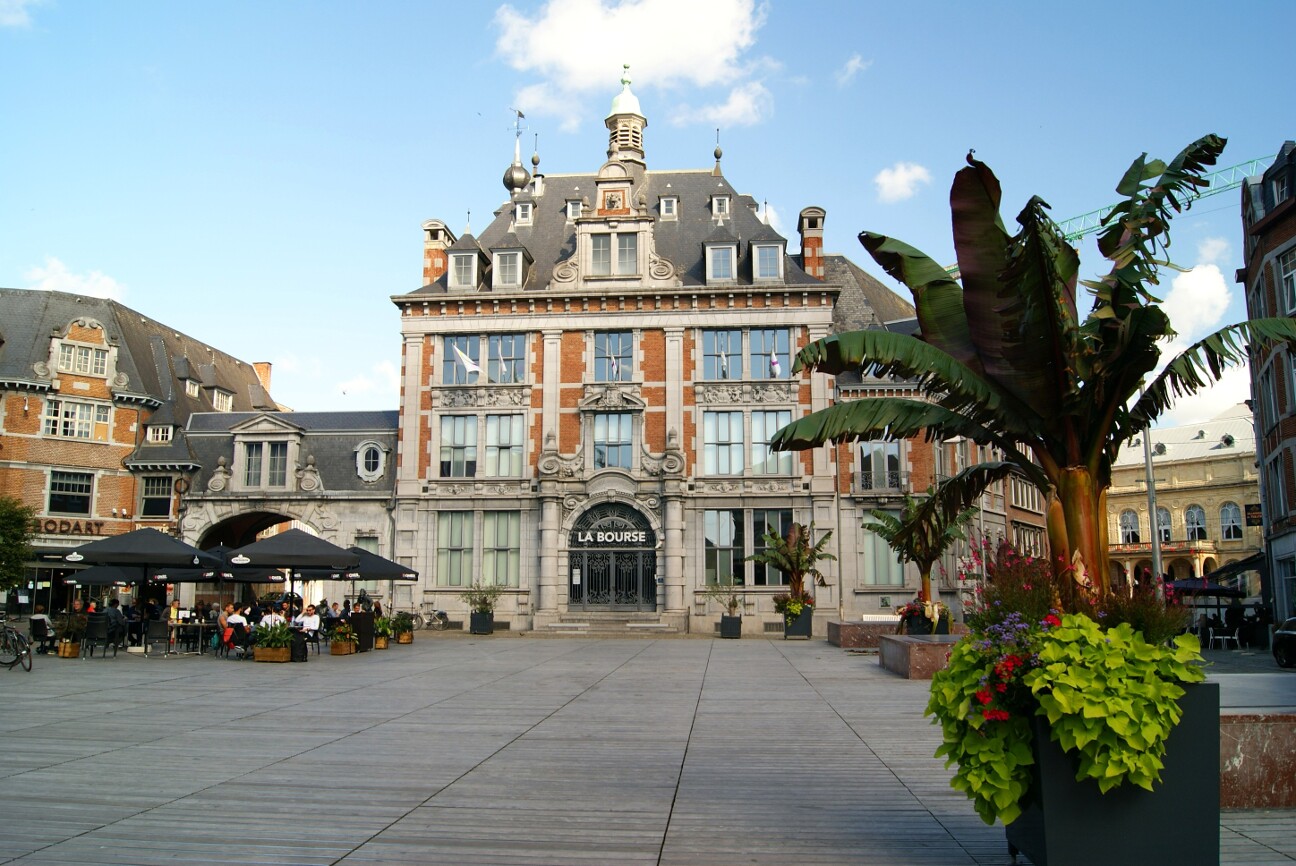 As were walking up the hill, a rather unique sculpture appeared next to the walls of the castle. We looked for any description or at least name of it but we couldn’t find any. Later, I have found that artwork of artist Jan Fabre is called ‘Searching for utopia’ and the copy of it can be found by the Belgium coast in Nieuwpoort. It’s really shiny and visible from the distance so for sure you will not miss it! This artist is also responsible for modern art installation called the Totem on Ladeuzeplein in Leuven. This one is also difficult to miss but for another reason, its uniqueness, as it shows huge Thai jewel beetle stuck on a 23 m high steel needle. 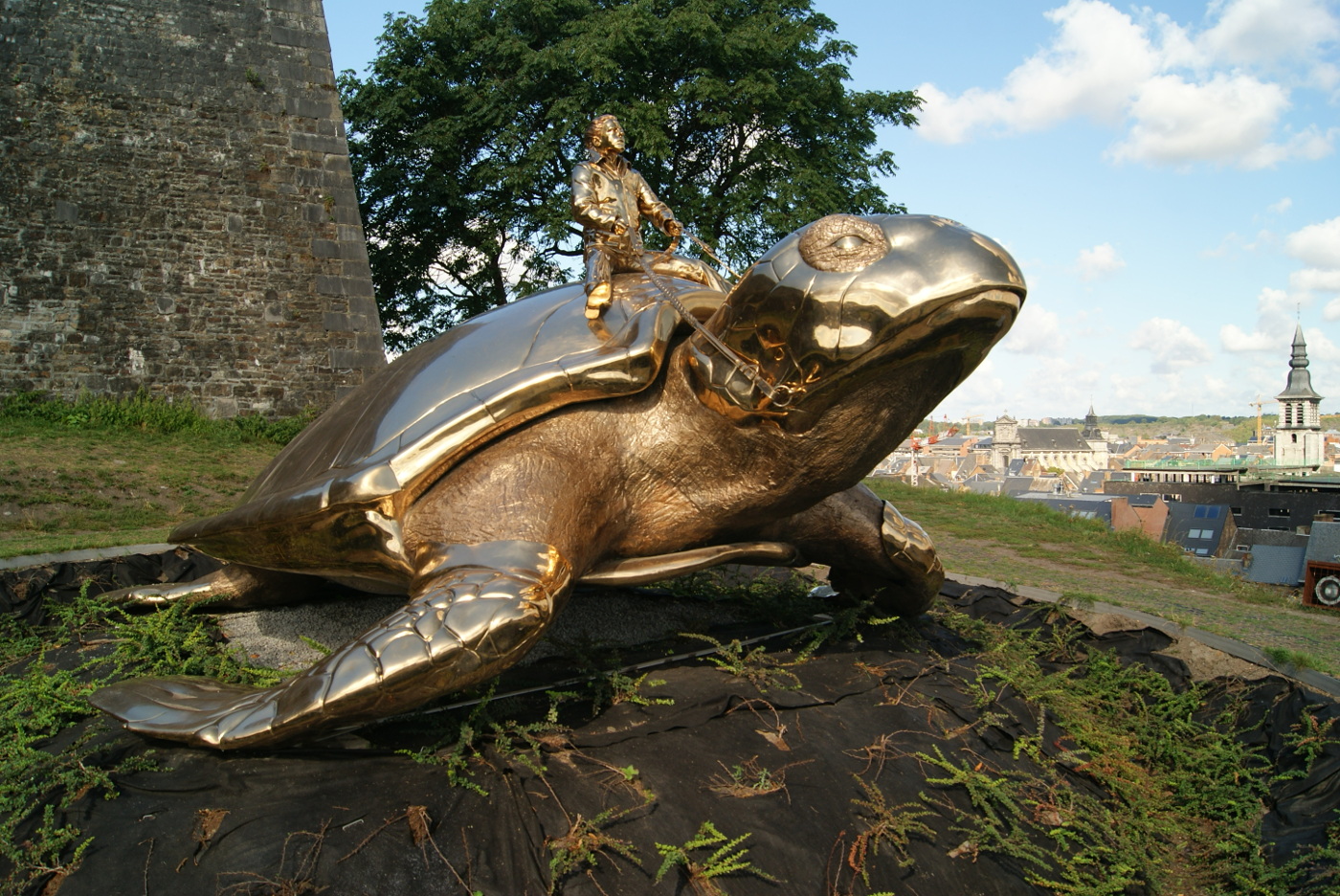 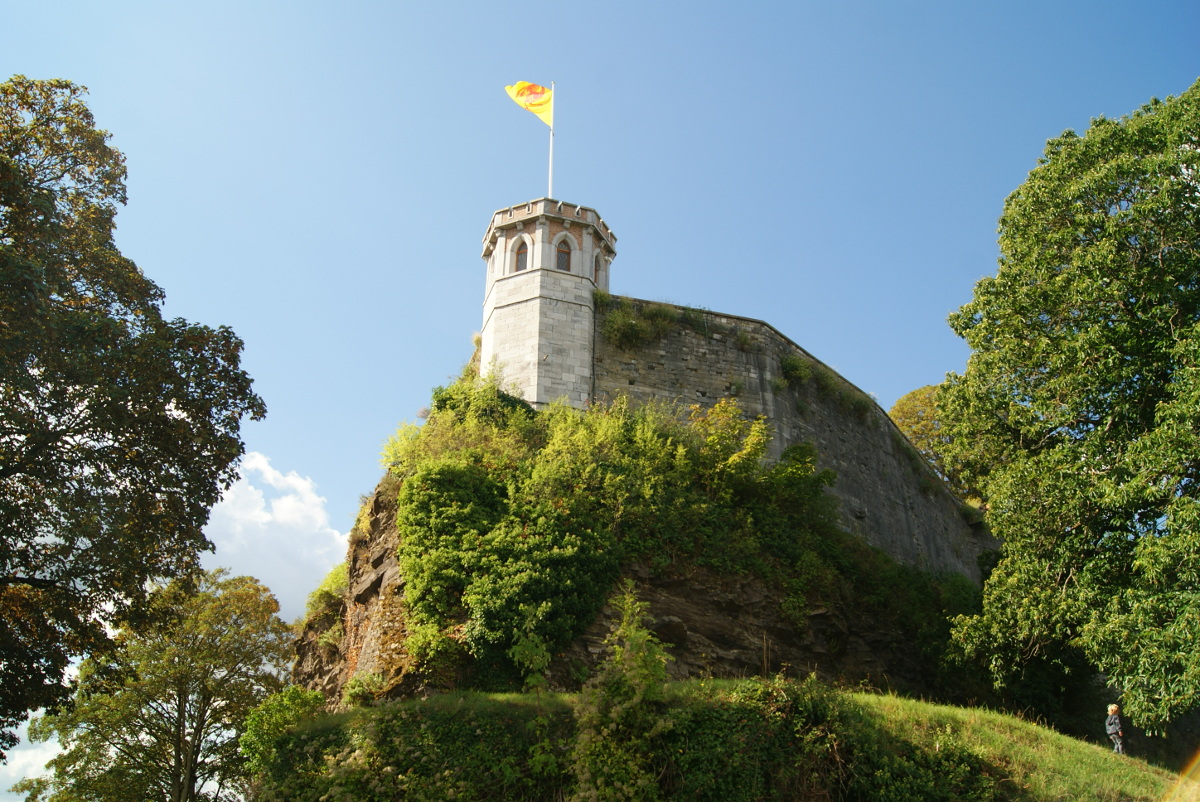 Beautiful panoramic view of the Meuse River on the way to the top of the hill, where you can get by car, touristic tram or simply on foot. As we were getting higher up the hill, we could admire the whole panorama of the river valley from another perspective. A week later we were cycling along the same river but in the region of Maastricht, the Netherlands. Btw, the area of Oud-Rekem is just paradise for cyclist! 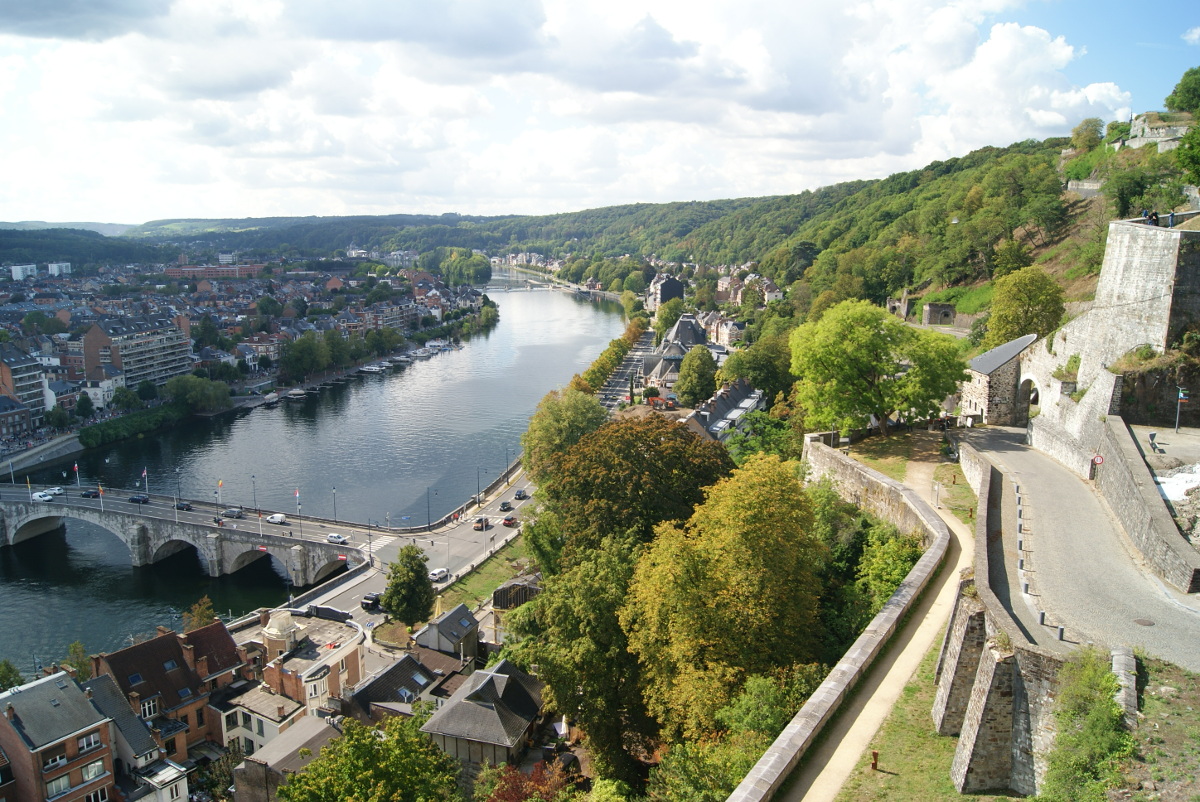 Château de Namur (nowadays a hotel), which is surrounded by a nice garden, was the furthest point we reached during our walk (photo below). The whole area of Citadel is quite big, it took a few hours to explore it. There are some tunnels to walk by and we noticed it is possible to visit some underground corridors with the guide but I think now their offers are not available. There is also an old theater and the visitor center in the same building as the restaurant (it’s the final stop of the tram). 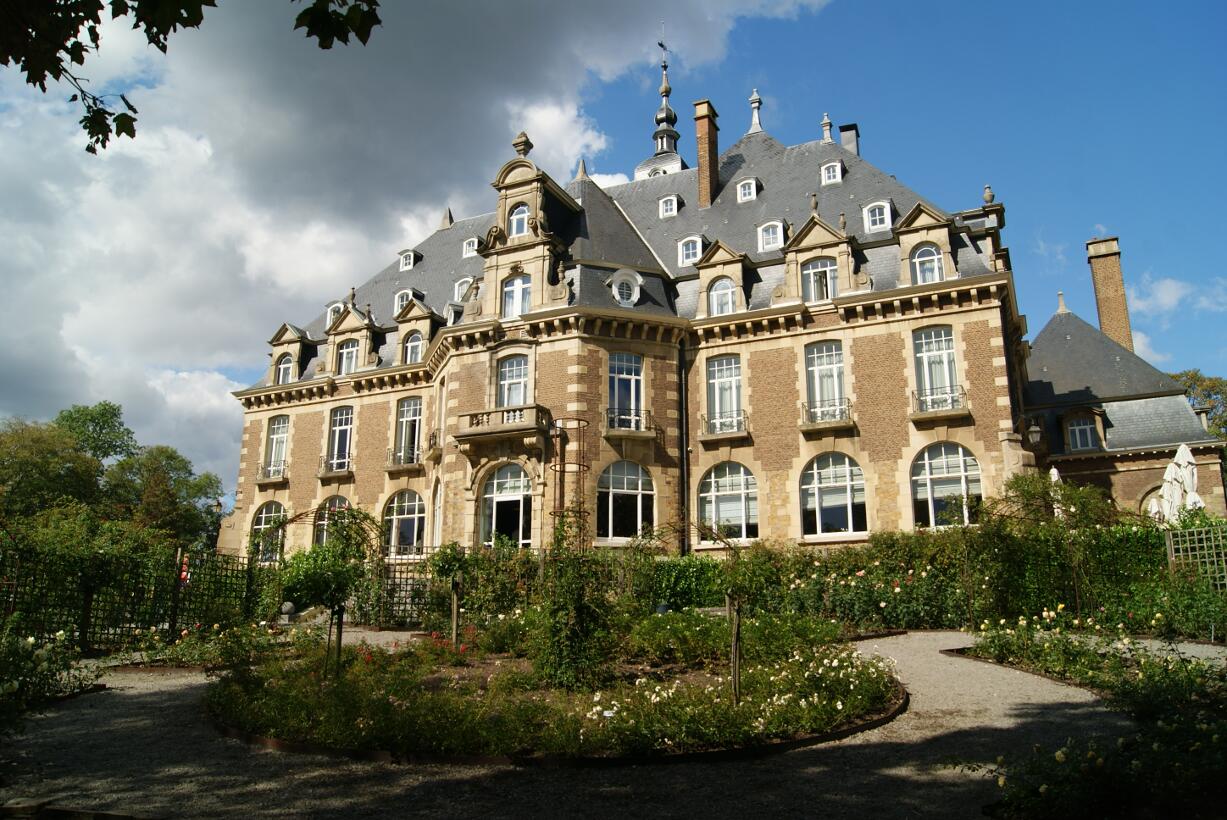 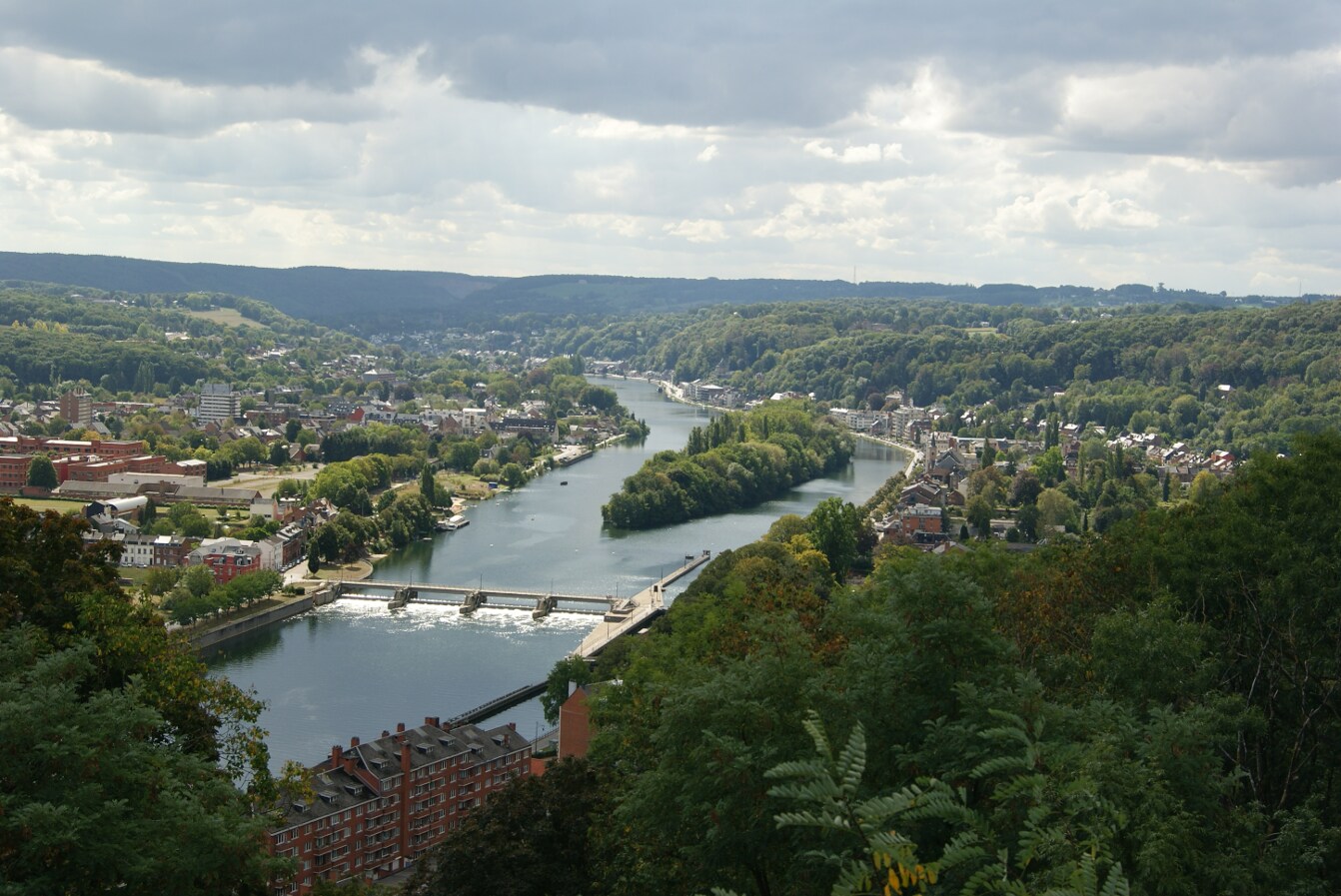 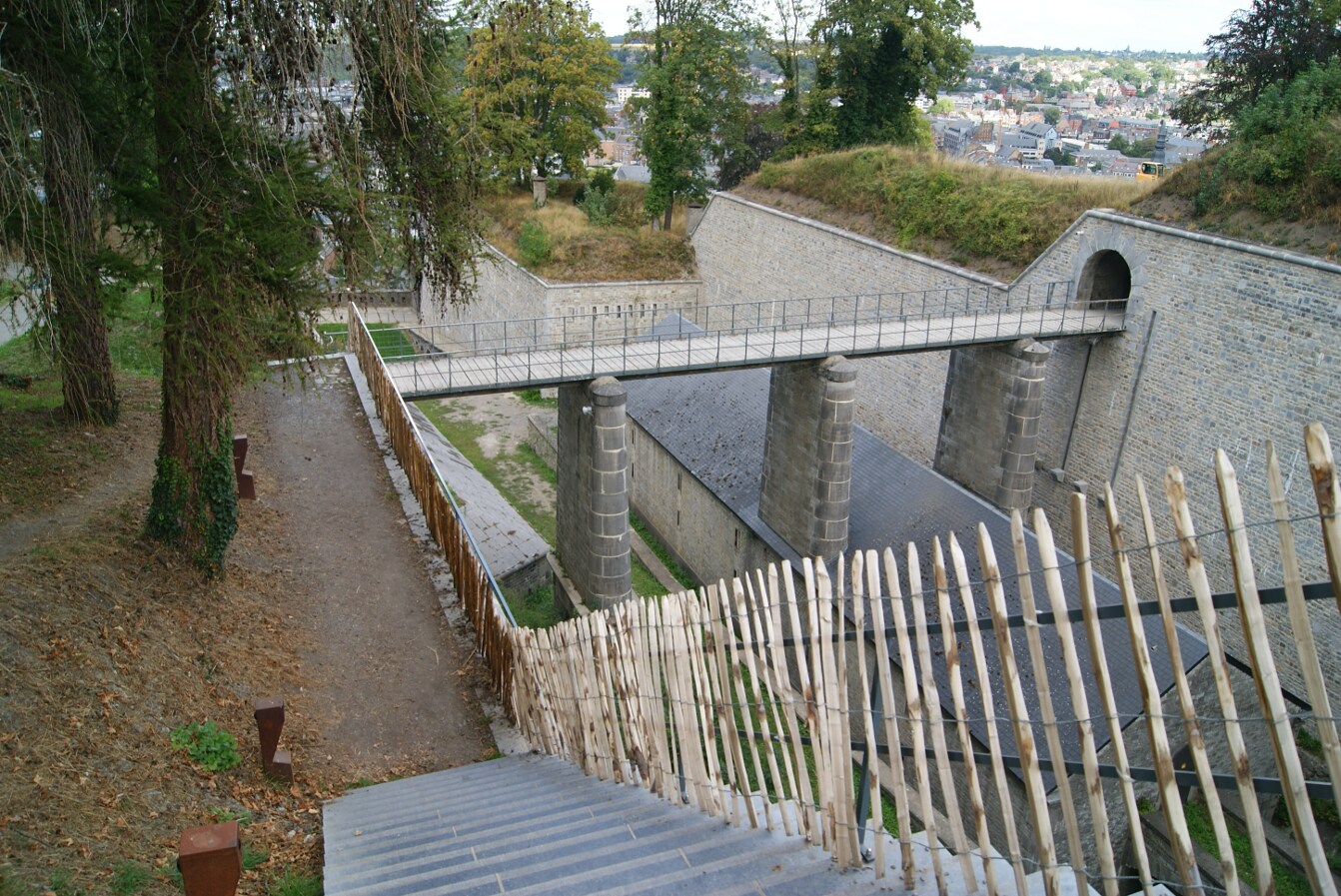 On the way back we stayed on the other side of the hill, overlooking the old part of the city where we parked our car. It was already past lunch time so high time to look for a restaurant. In Belgium many restaurants close between 2 pm and 5 pm, so we had to hurry up to make sure we found something to eat before that afternoon break. 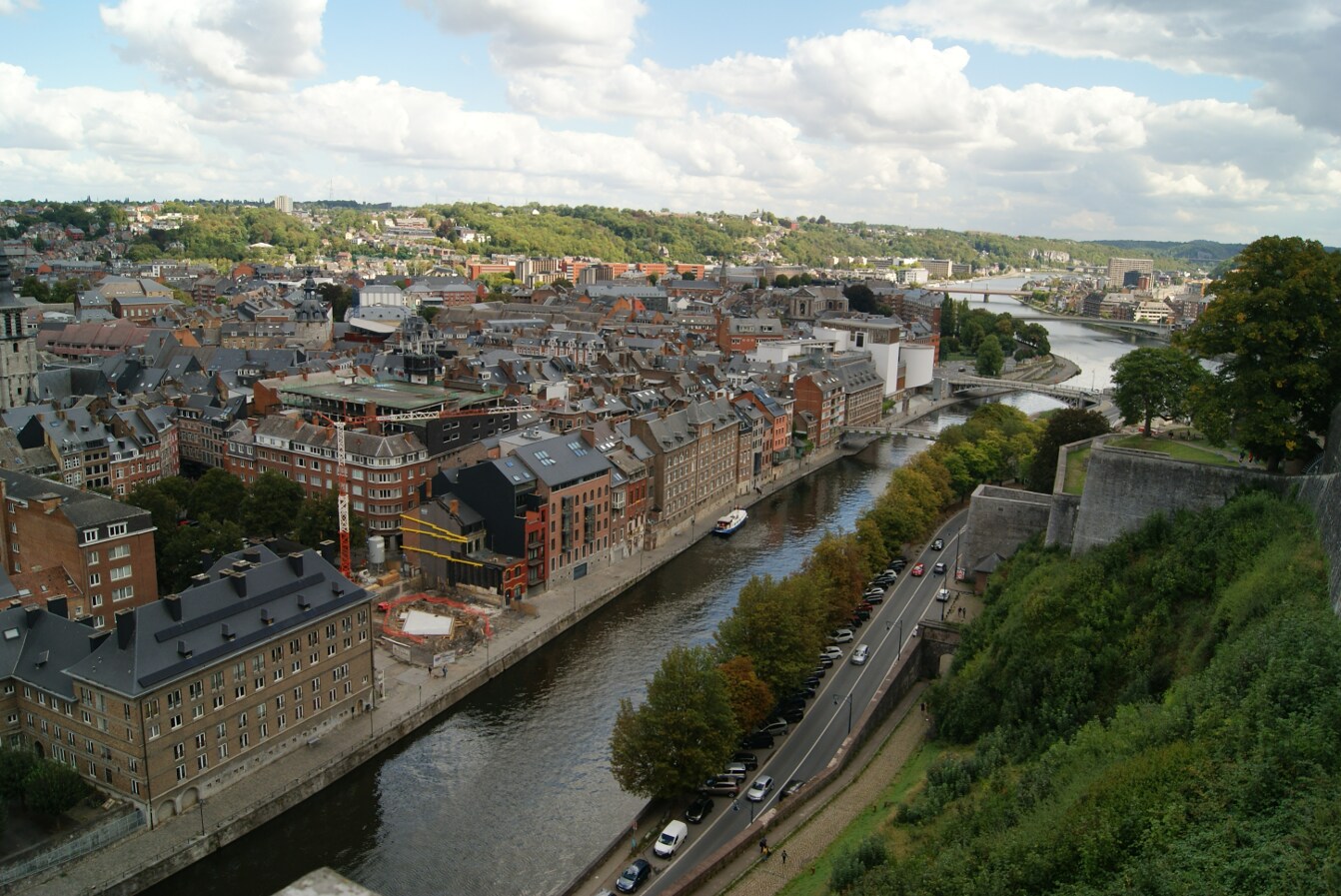 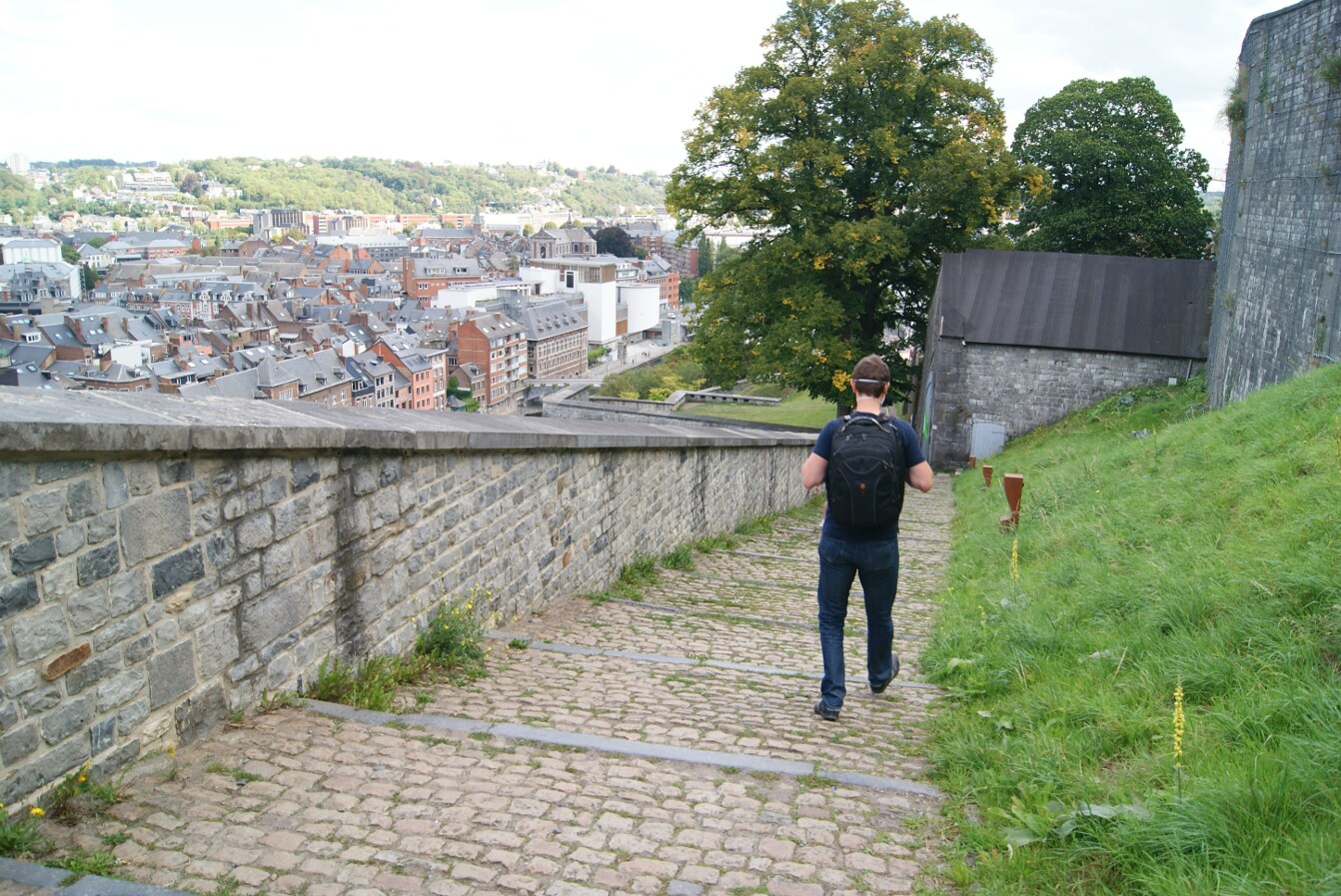 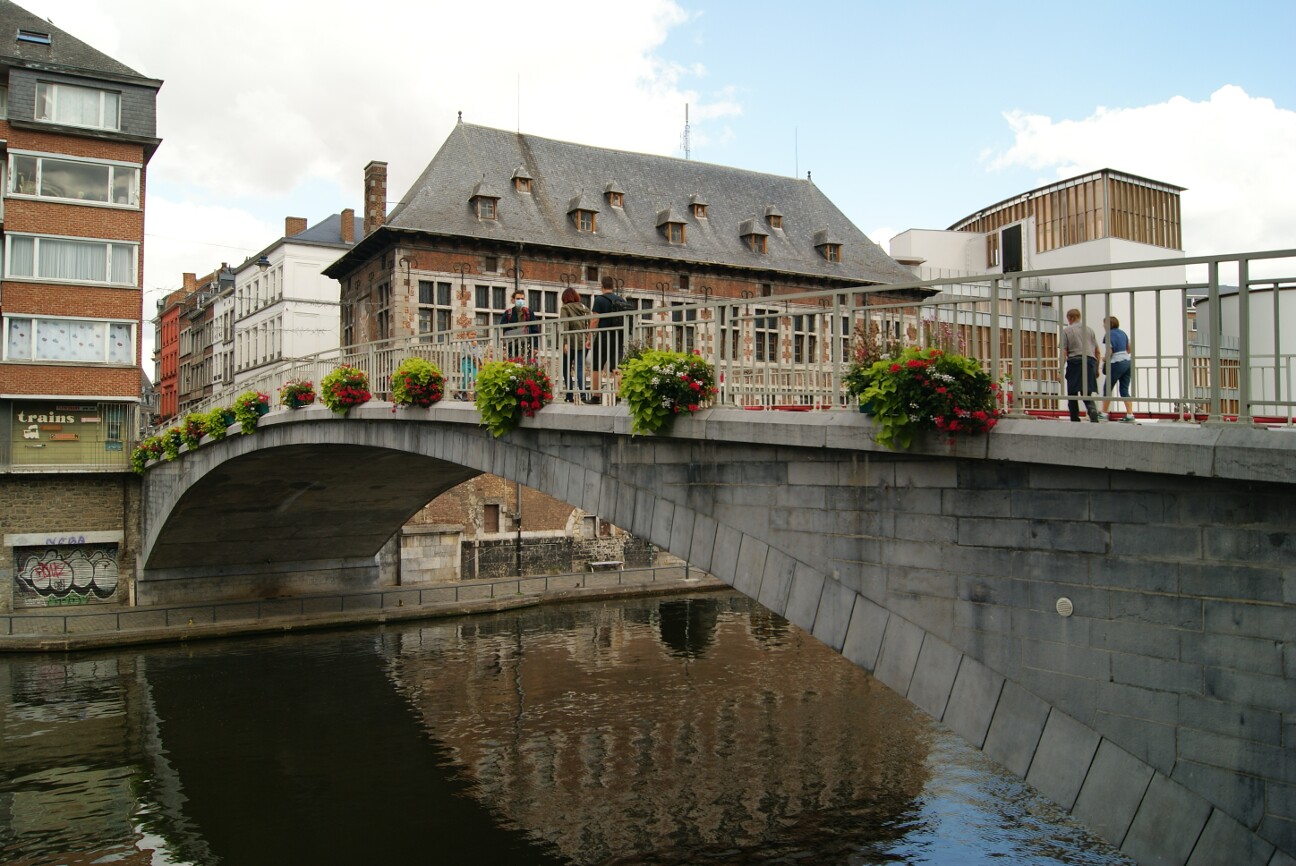 Already on the highway leading to the area where Villers Abbey is located, we notice the signs advertising this place. It turned out to be very popular based on amount of people we found there! As soon as we got to the village Villers-la-Ville, we were shocked by the amount of cars parked just everywhere. We decided to first try and go to one of big, free parking but they all seemed to be fully packed. We were really lucky when a women walking through parking, offered her spot as she were leaving. We found the entrance pretty quickly and after showing our tickets on the phone, we could start exploring the ruins with the small map we got at the entrance. 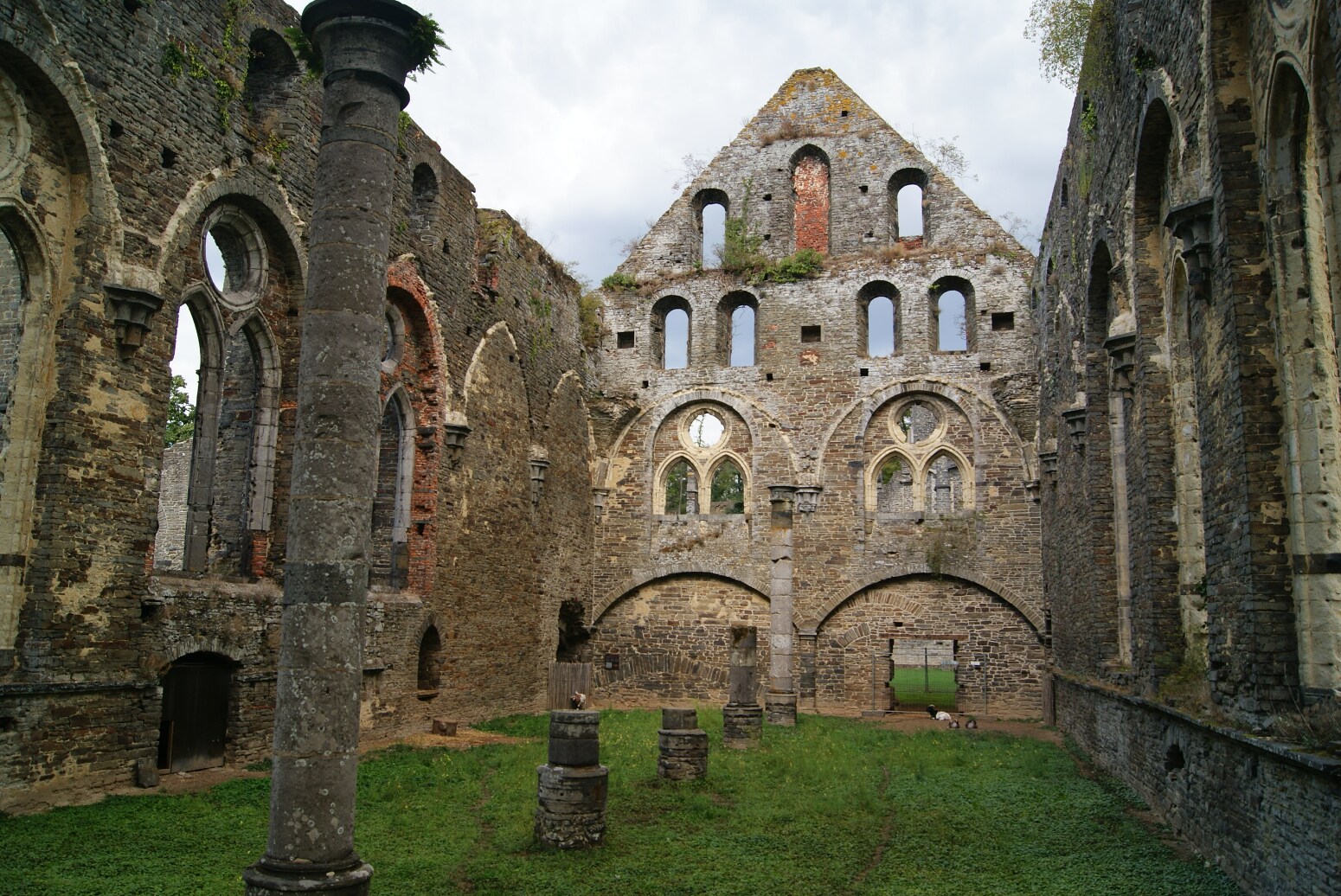 According to the map, the photo above shows the refectory; the dining are were monks used to eat together but now there place is occupied by few goats and geese. You can clearly see that plants began taking over this abandoned abbey long time ago and only thanks to relentless efforts, plants didn’t completely destroy the construction of this place. Beautiful arched, columns, unusual shapes of windows, make an interesting setting for portrait or fashion photography. Indeed, there were a few models in a beautiful dresses with professional photographers taking their photos. Dresses in the vibrant colors look stunning against the muted tones in the background of stone and rock. 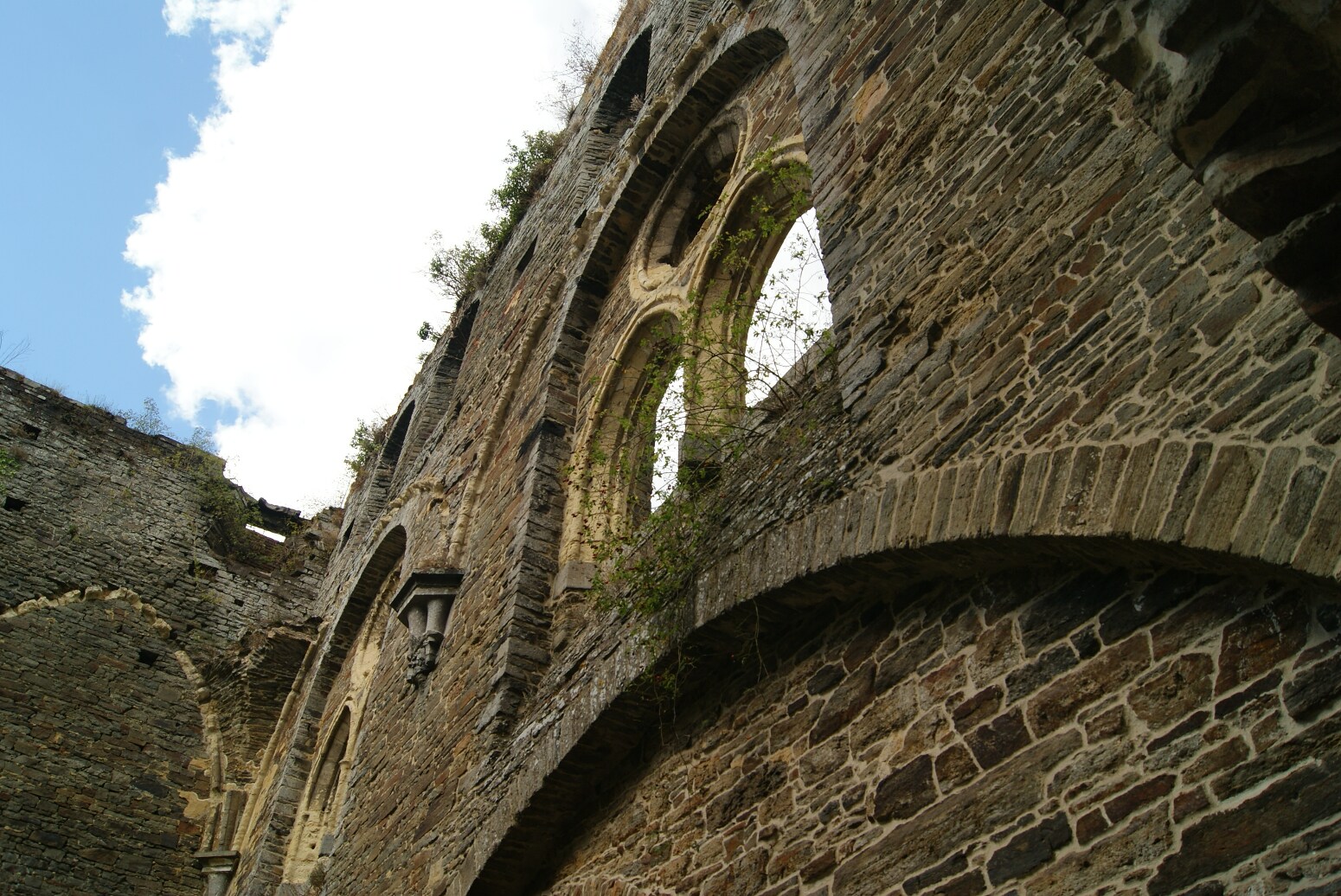 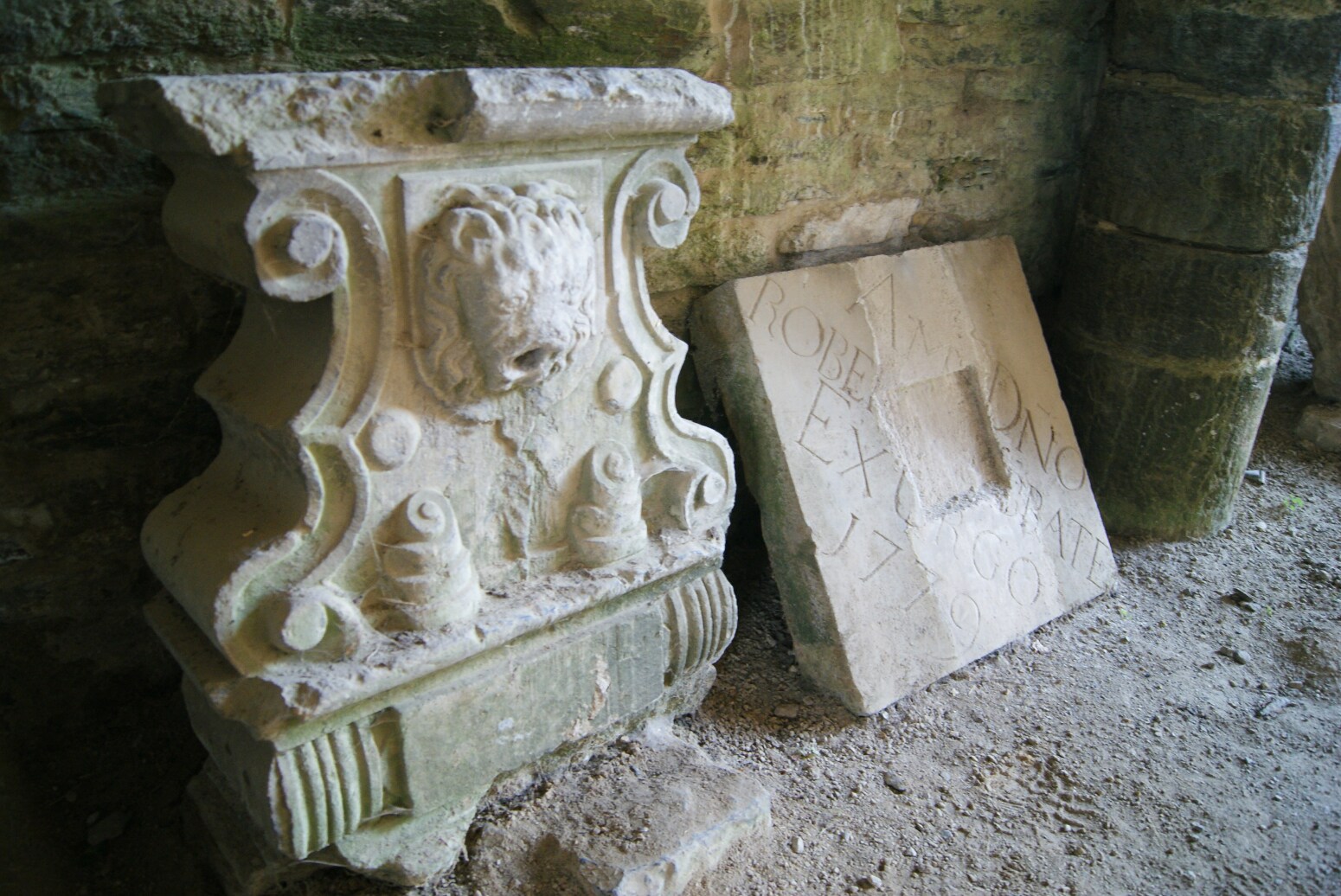 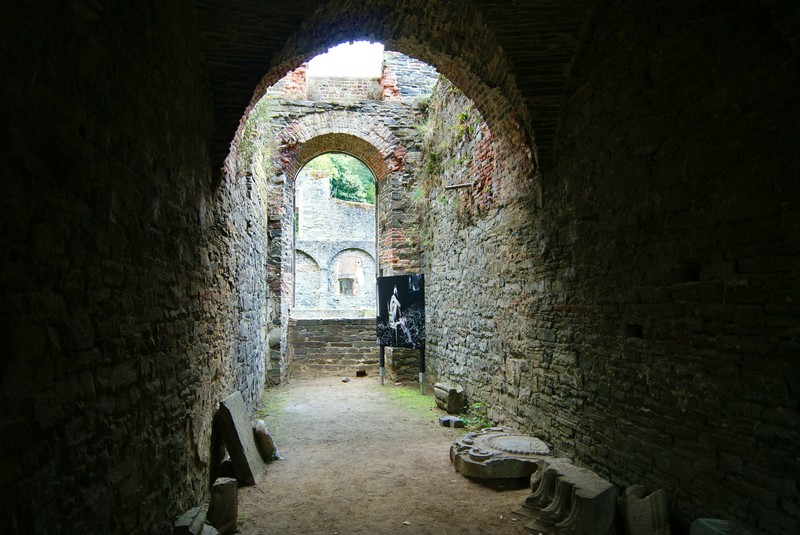 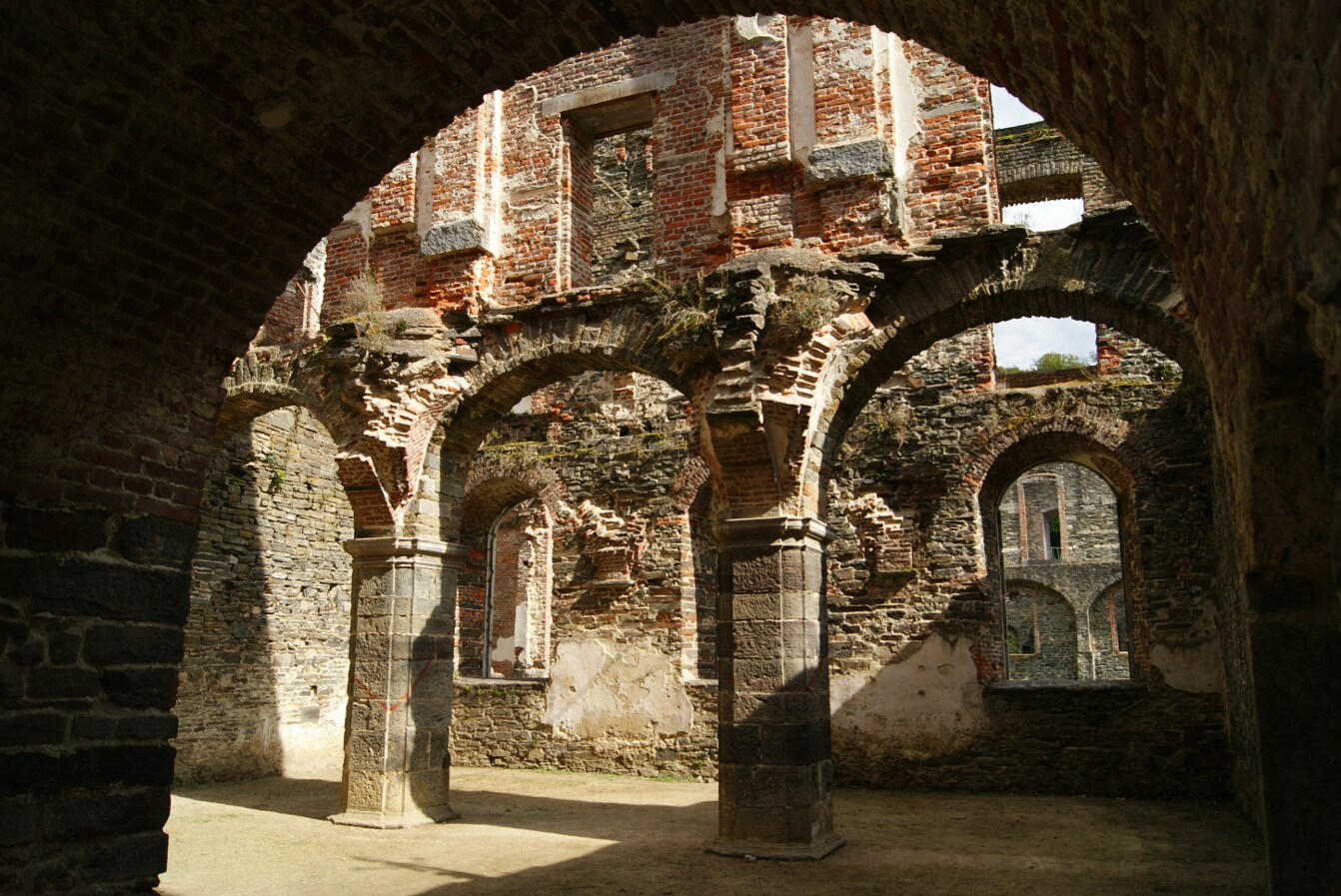 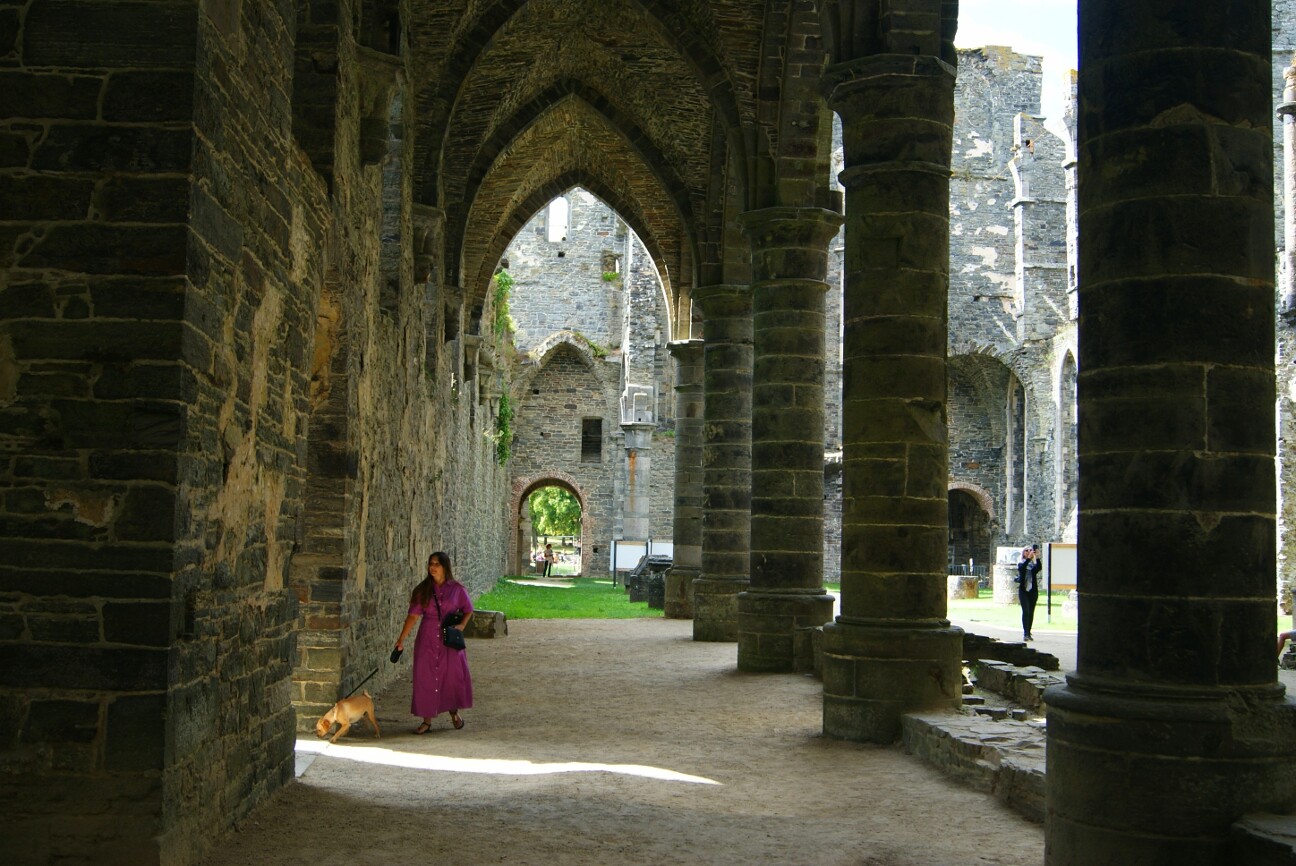 When we entered the ruins of the church, the huge nave (the central part) made a big impression on us. Just, look how small the people are in the photo. I did have to patiently wait for a moment with fewer people, don’t be misled by what you see on my photos … it was really crowded that day. But I really hate to have a random leg or head on the photos where architecture plays the major role :D 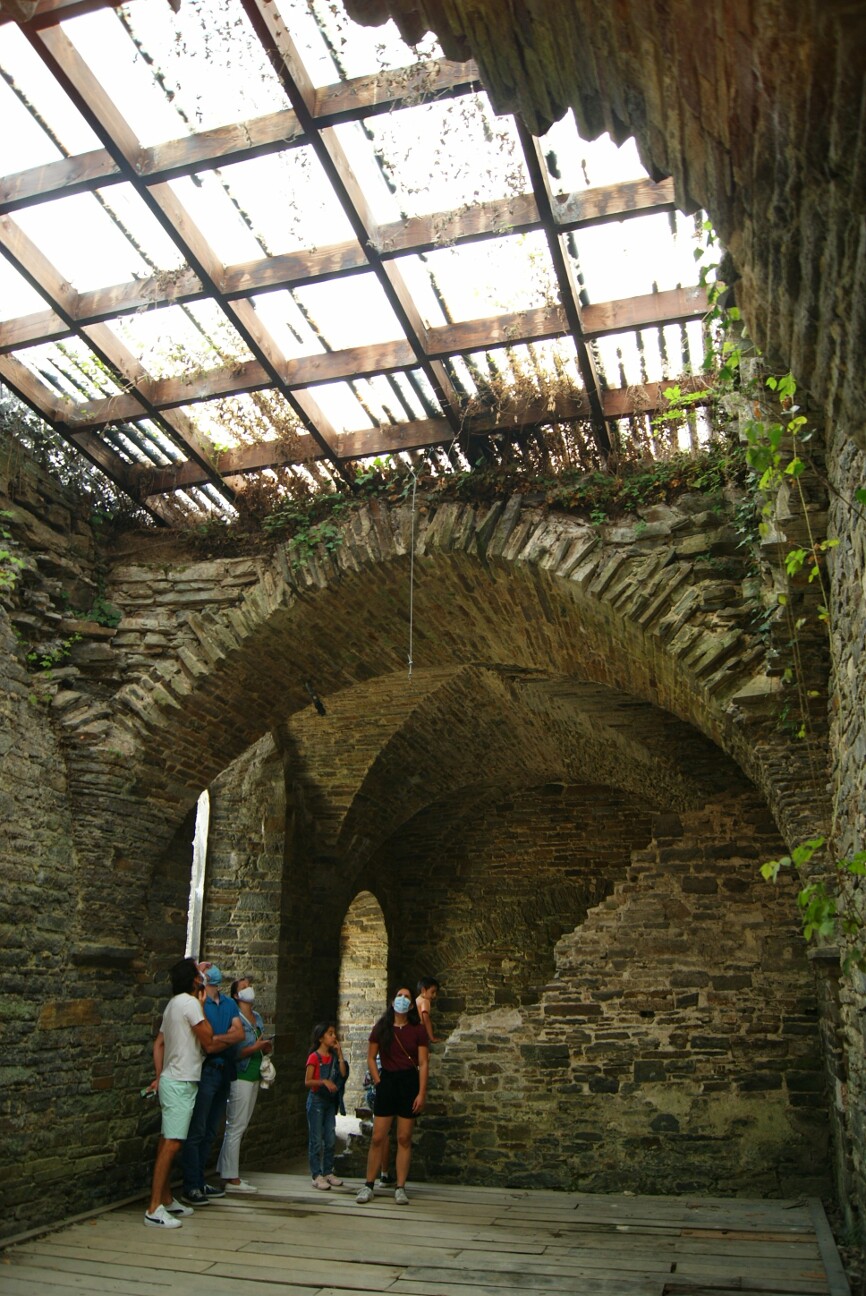 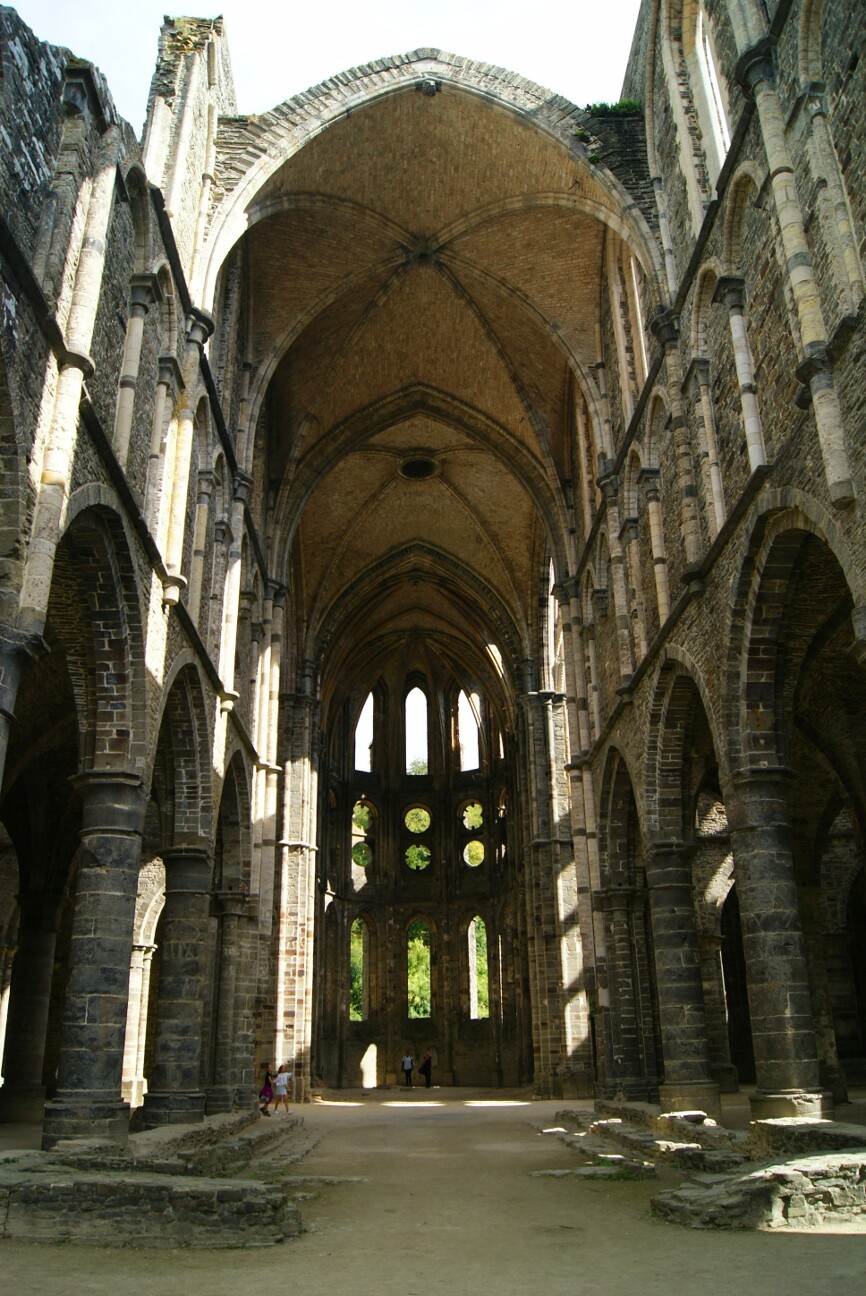 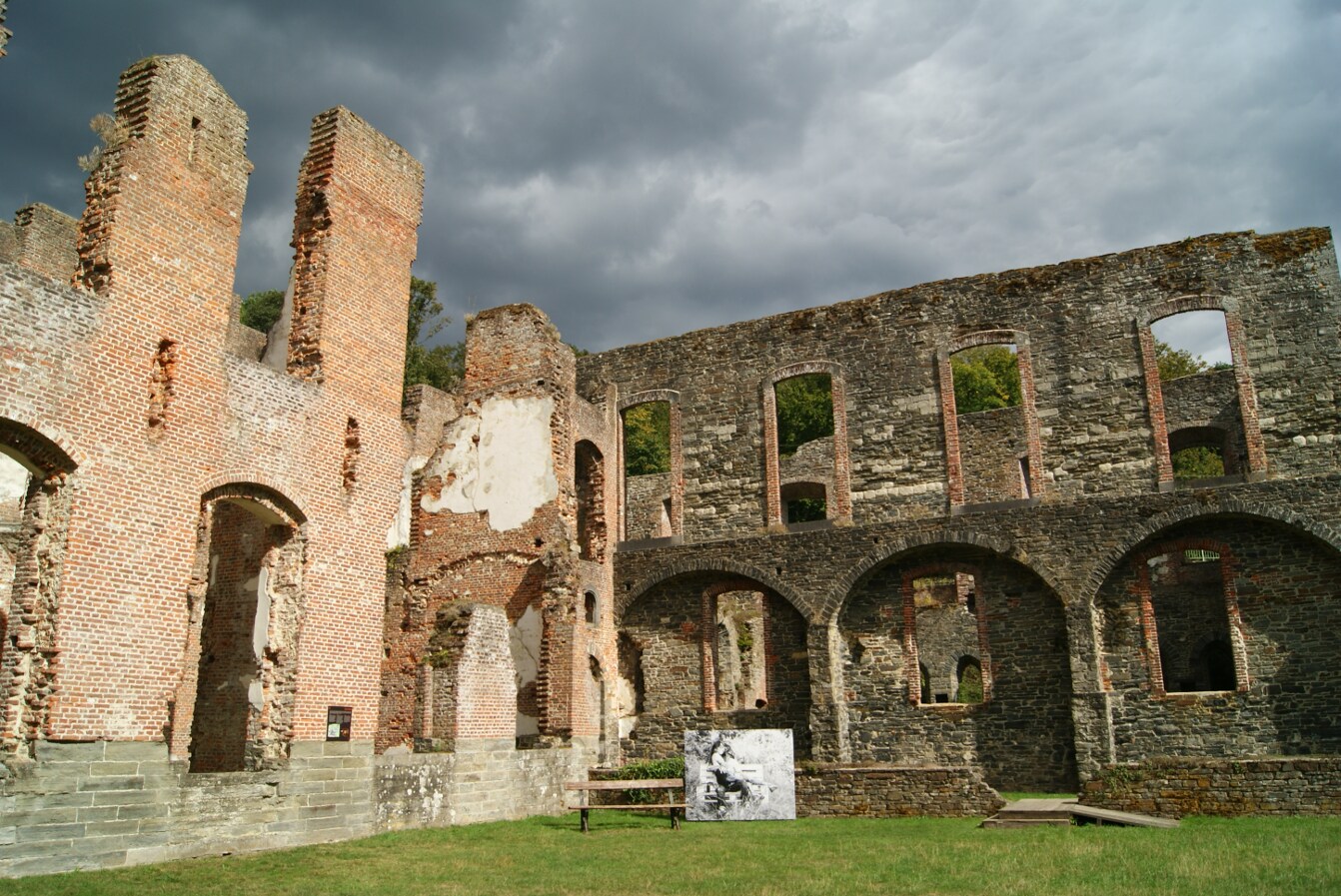 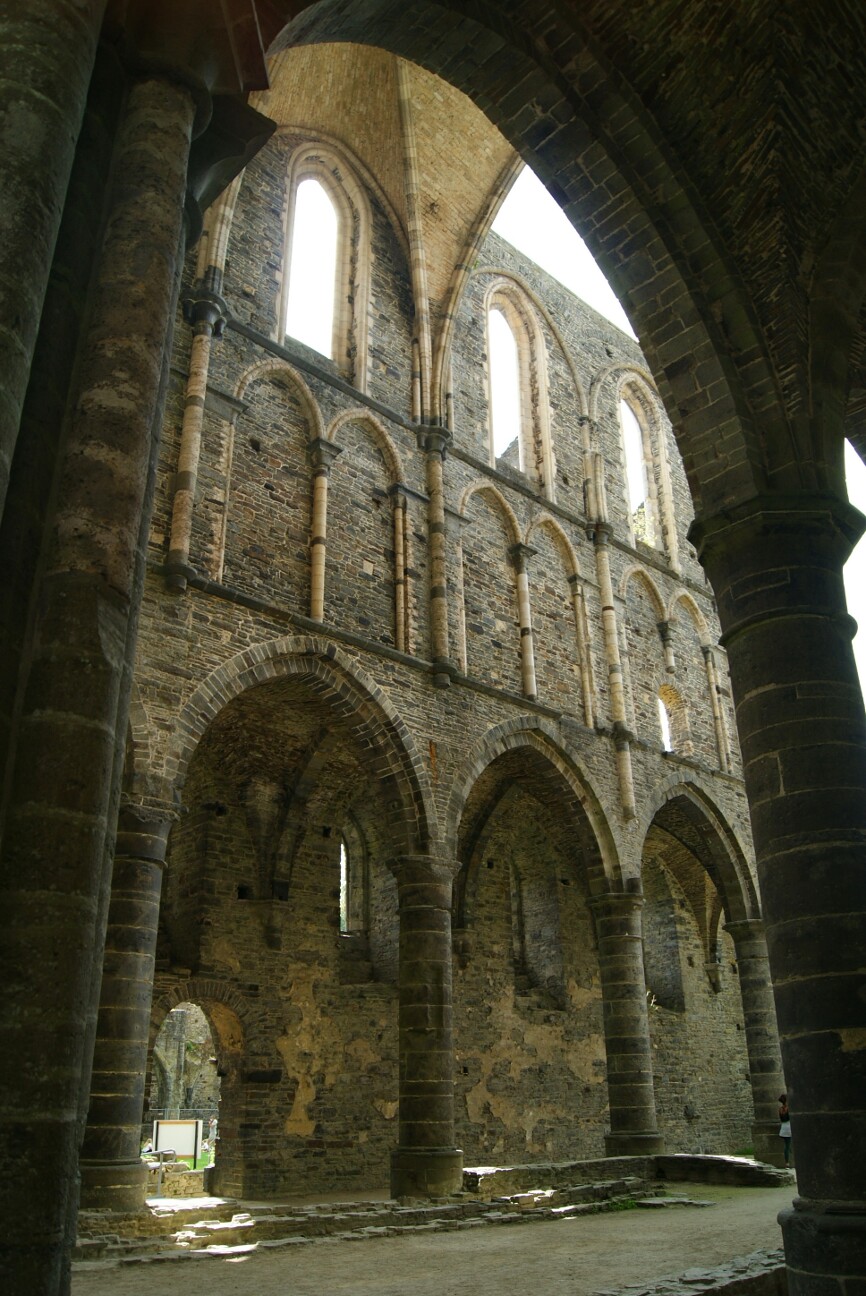 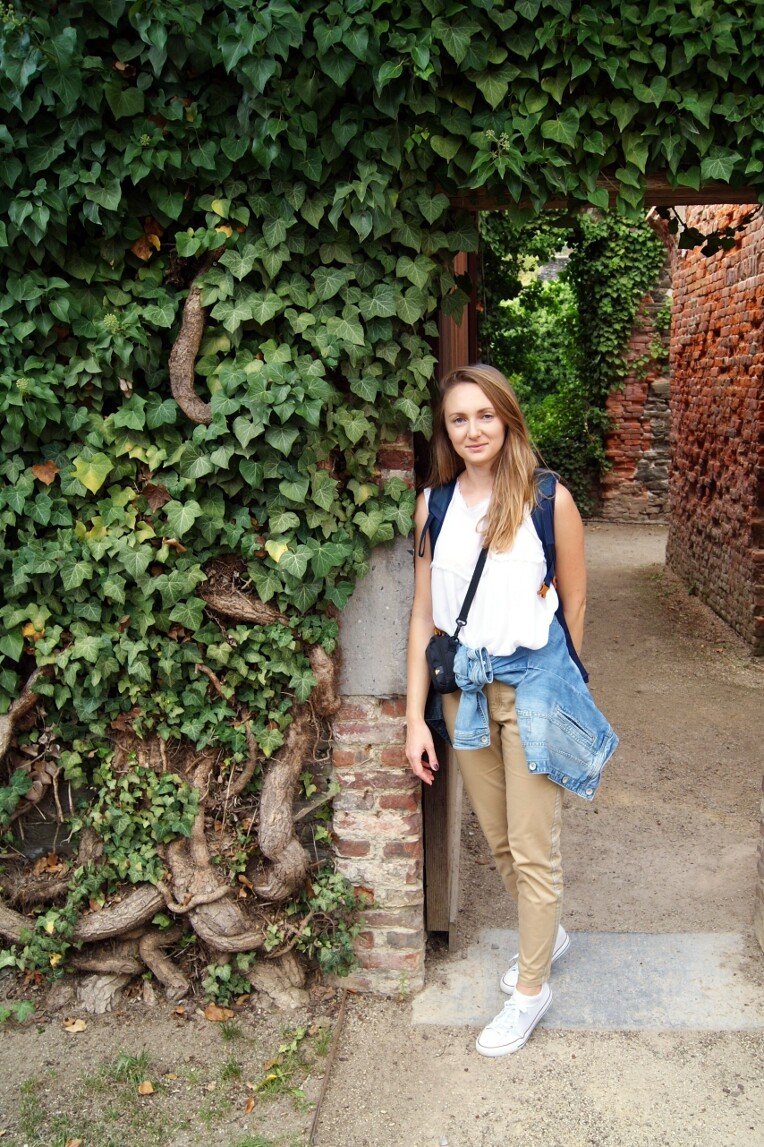 We passed the sacristy and abbey’s palace to finally end up in the gardens with fountains and colorful plants, although we could clearly notice the first signs of autumn. Pretty and quiet place but now very big. We immediately noticed big stairs leading to chapel and vineyard. What surprised us … there was a railway track just above the stairs so when you are traveling by train, you can catch a glimpse of the abbey. From the top of the hill we could see the ruins of the abbey from a distance, but only a small fragment was visible as the rest was covered by trees and passing trains. 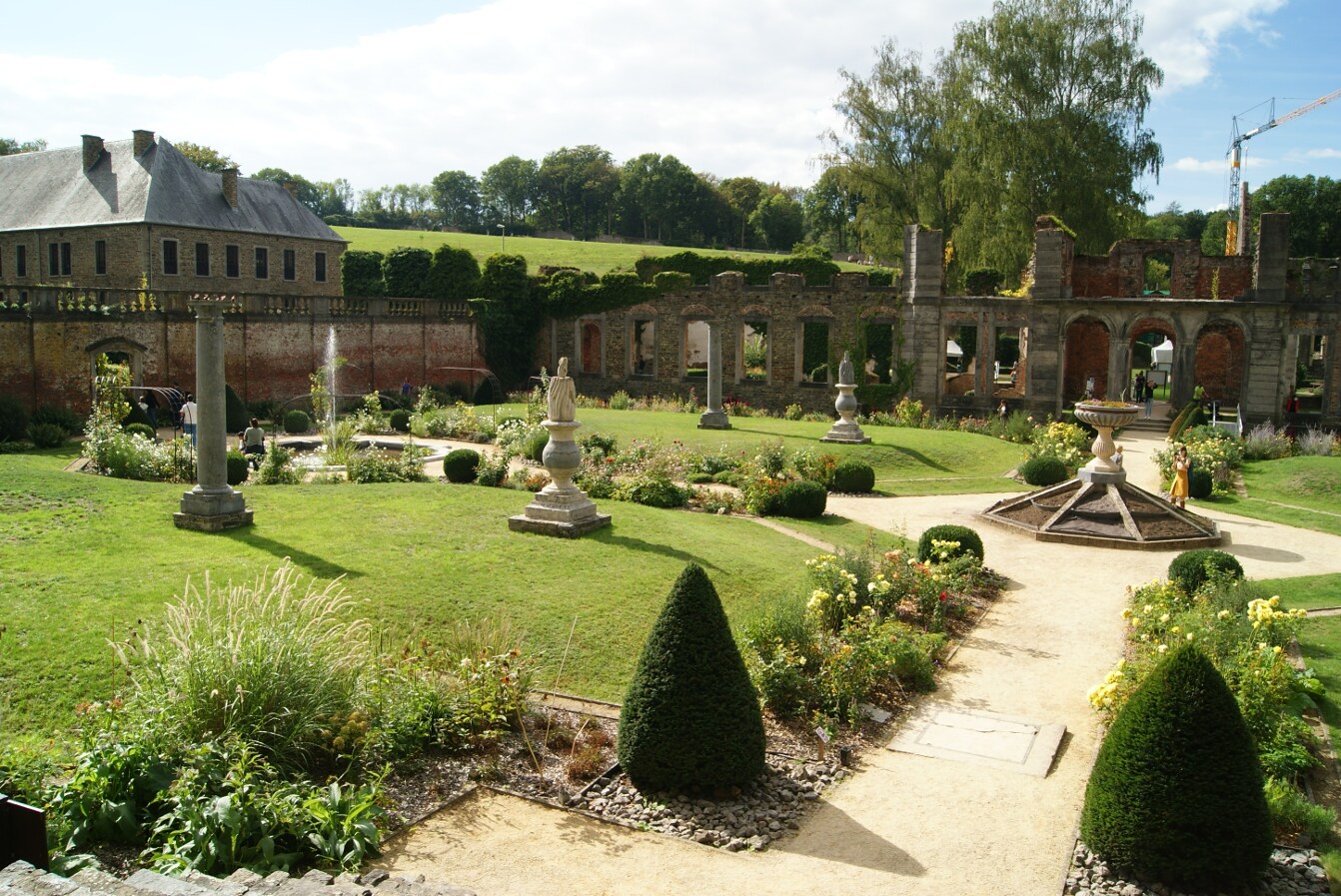 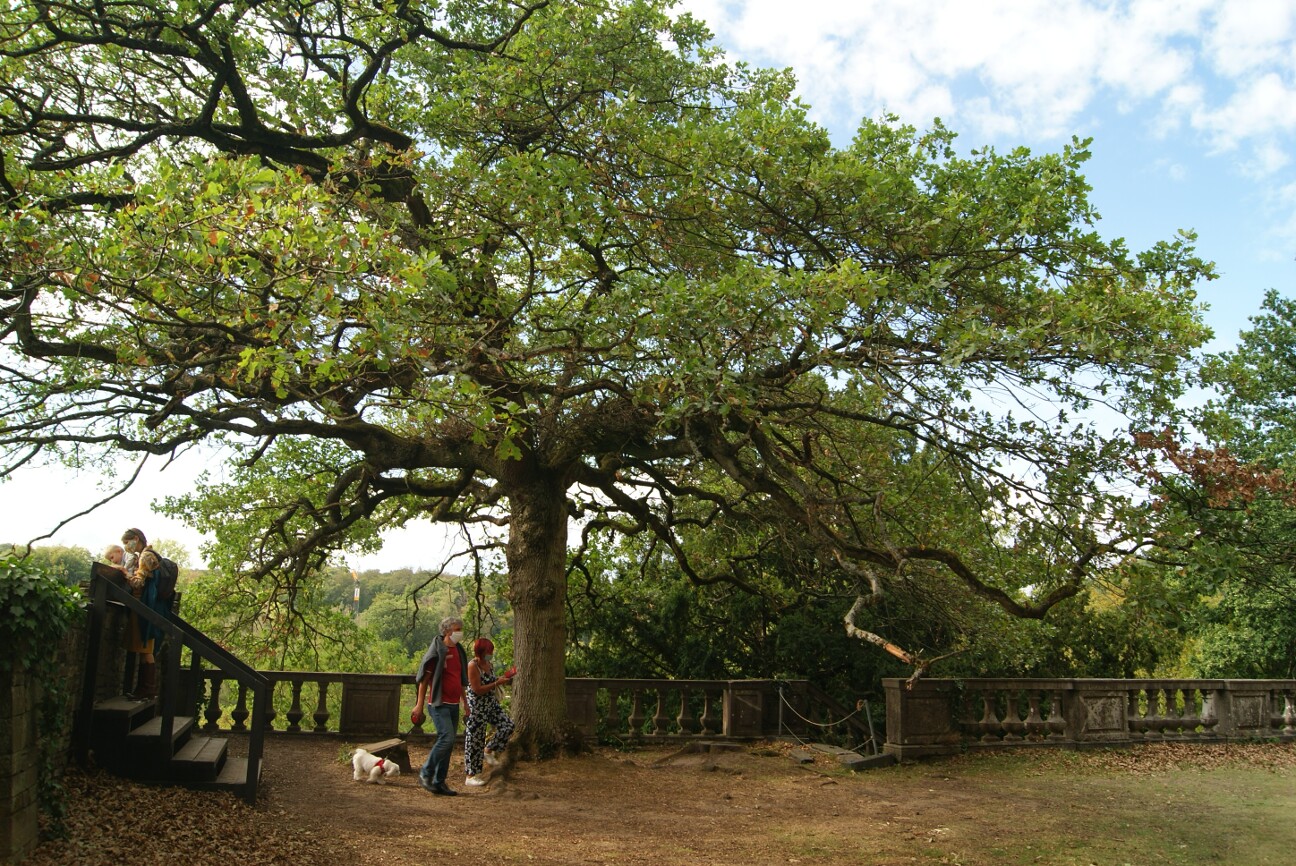 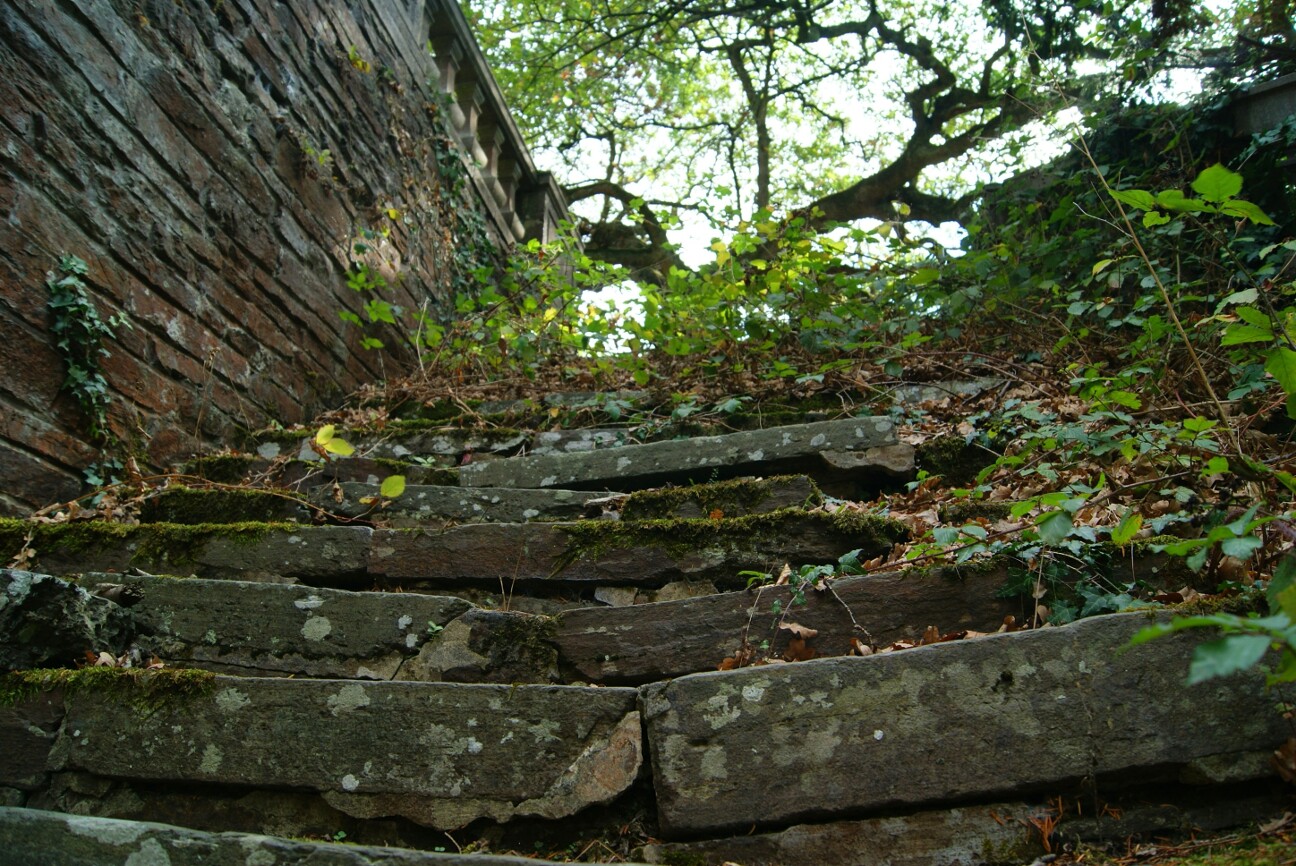 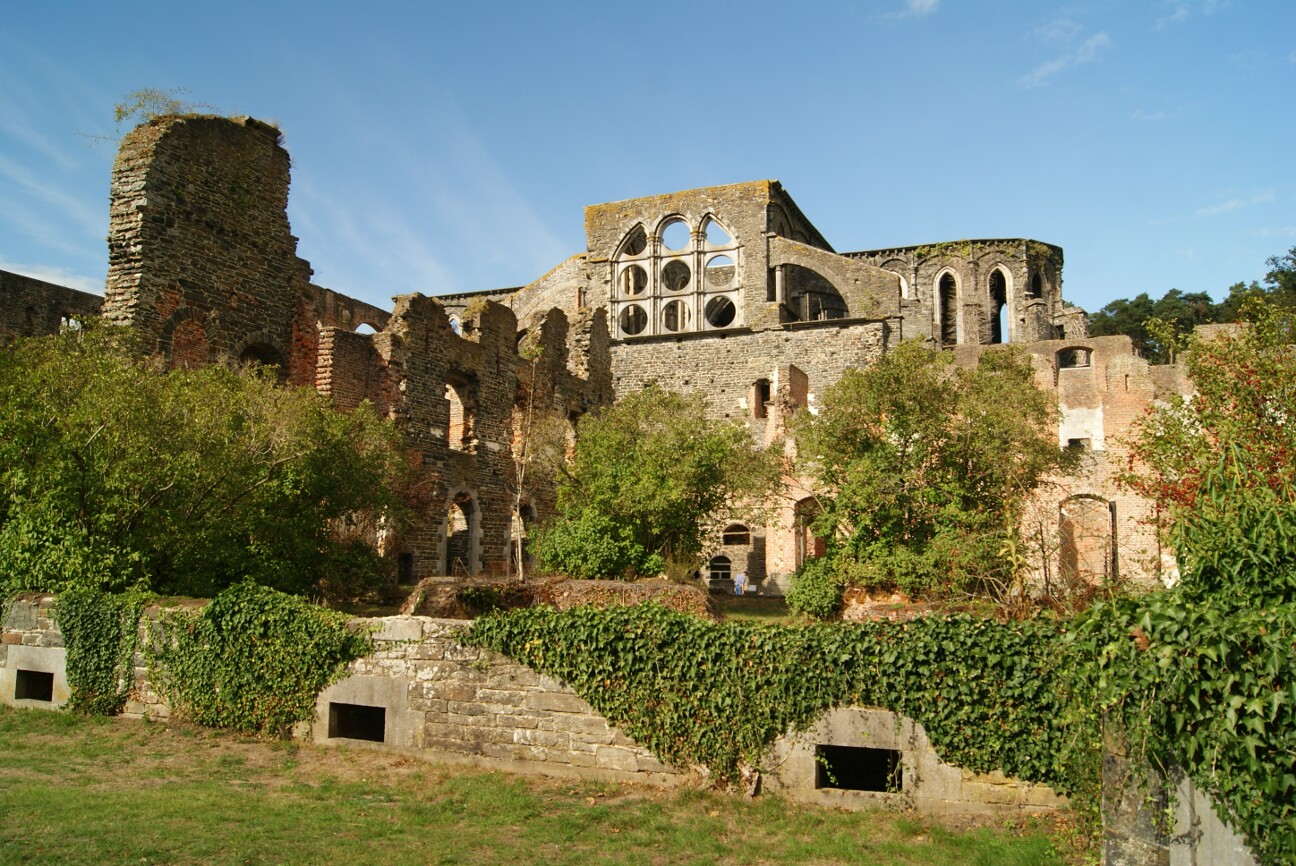 As funny as it sounds, we couldn’t find the exit. There were many signs pointing left/right in different places of the complex but we felt like we are going from one to another without any known direction, after good 10 minutes of following the directions, we finally ended up in front of the stairs leading to the fields located on the other site of the street from where we could see the abbey from a distance. We had to pass visitors center, cafe, souvenir shop and another restaurant to get outside, really not easy! :D 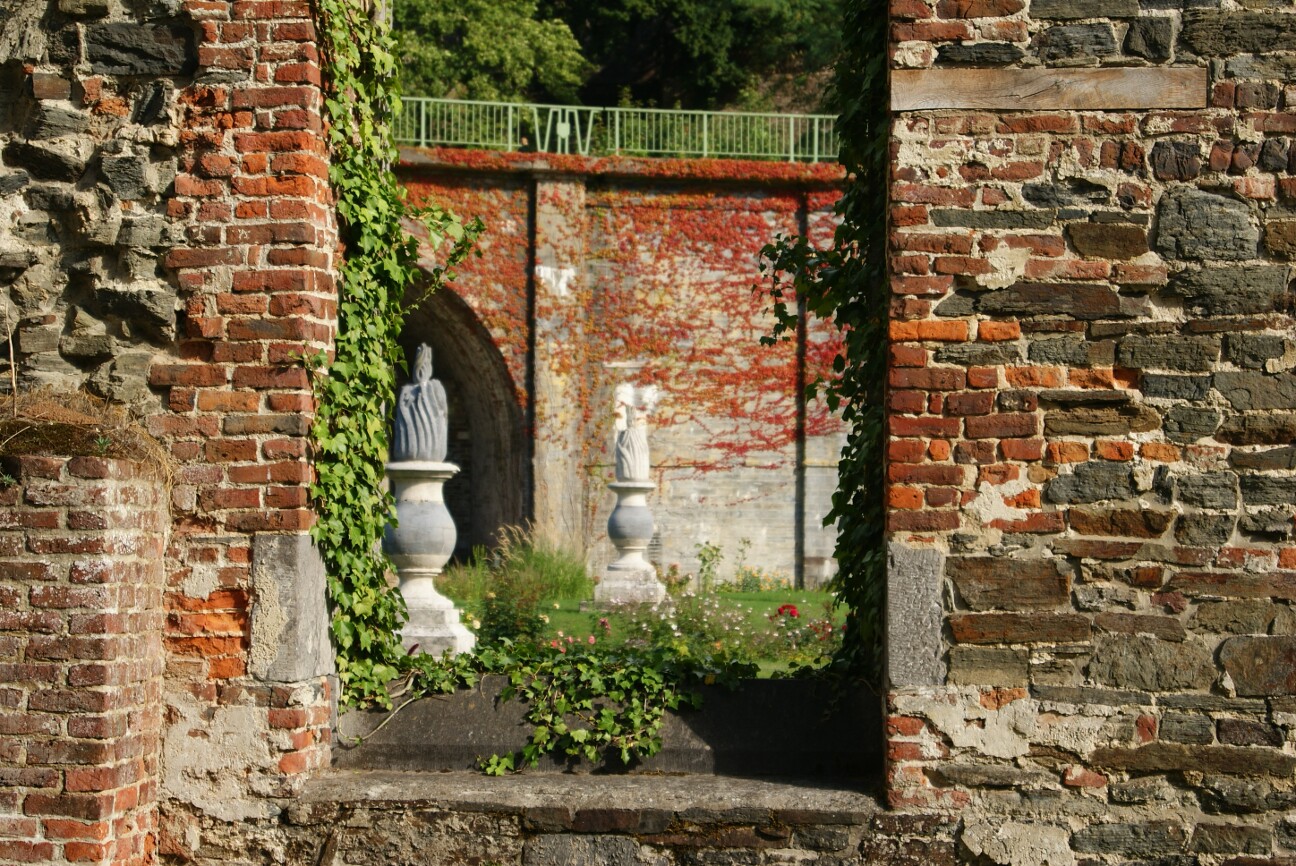 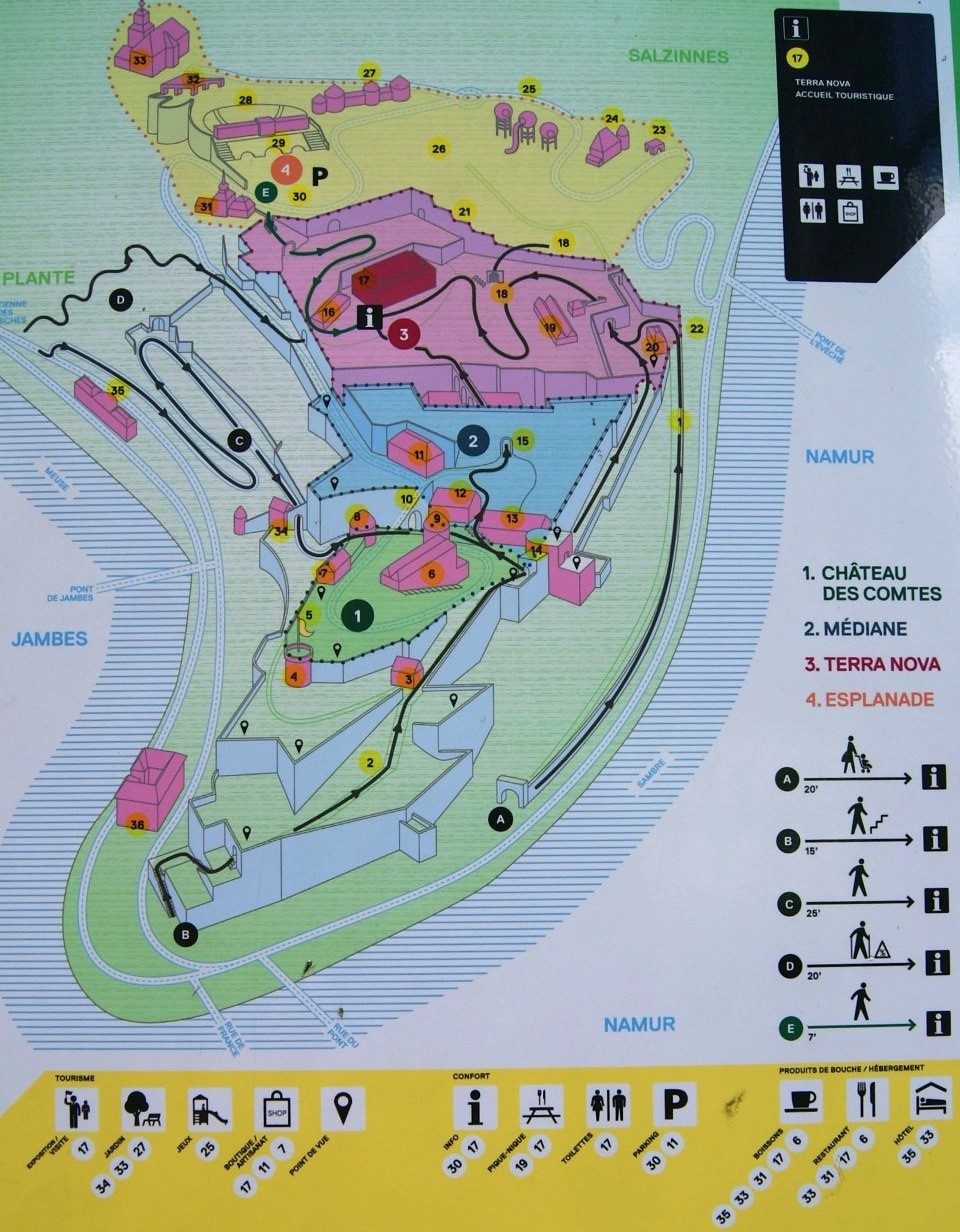