After two weeks of hiking we really hoped to spend few quiet and relaxing days in Pokhara and we were not disappointed :) Phewa Lake, surrounded by the city and high peaks in the background, looks stunning! Especially, during sunset when the water changes colors from blue to pink-ish and the fishermen with their tiny wooden boats are tending to their nets completed the scenery. 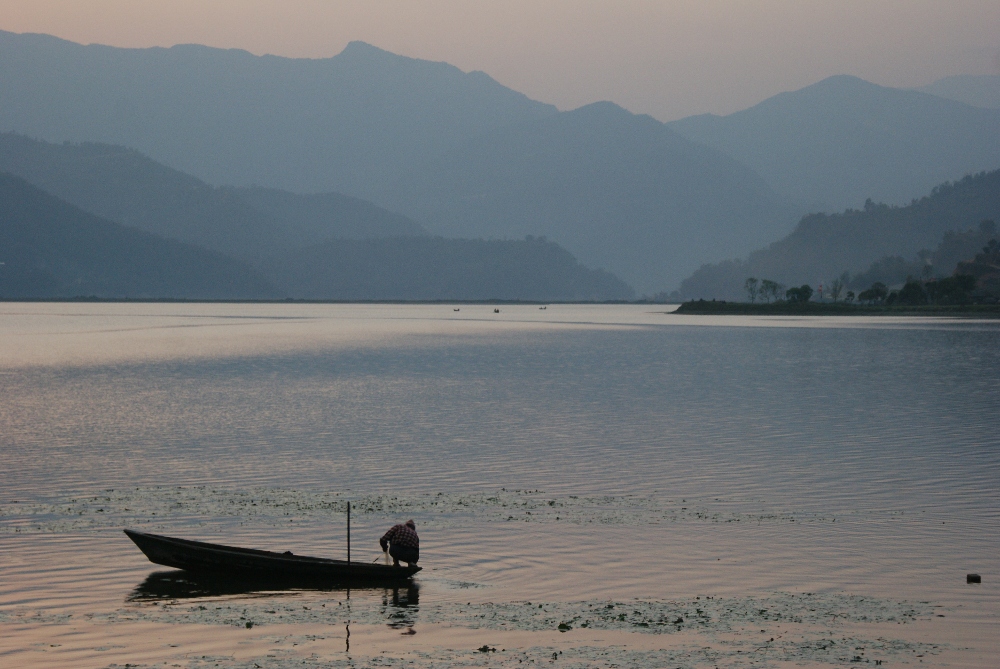 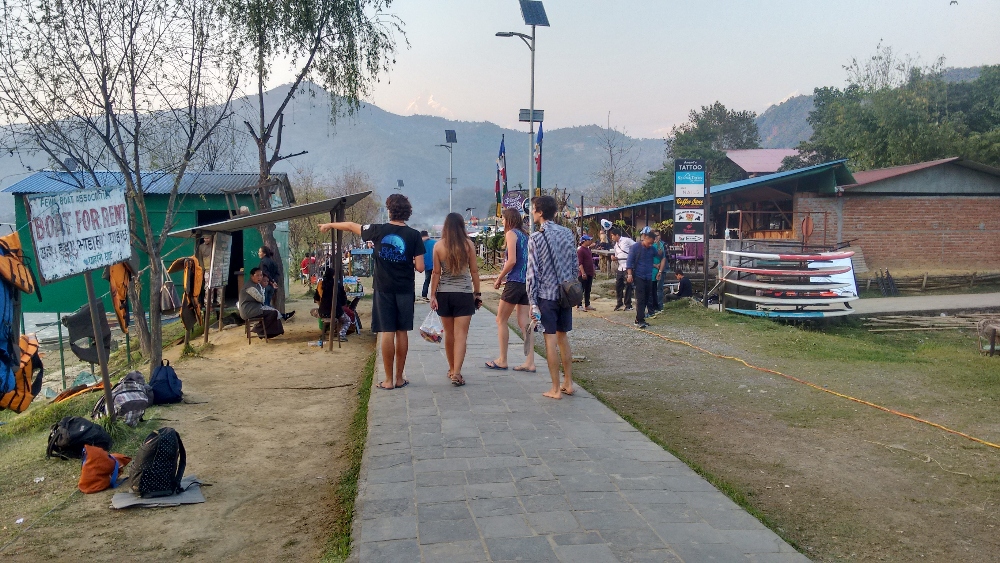 Promenade stretches along the lake side

The main street at the lake side is full of shops offering a broad variety of hiking gear, cashmere products and restaurants serving delicious local cuisine. It is common to bargain in the shops what is a part of the culture here and after some practice you will get better at this :) The whole street looks like a huge outlet store of The North Face, low prices are really tempting just note that it is almost certainly fake. So check the zippers and stitching, more tips here.
However, the small backpack I got there, survived next 1.5 month in Asia while being used every day and it is still in a very good shape! :) Already on the first day we noticed many paragliders flying above the lake and I convinced Sebastian to try it! We choose “Frontiers Paragliding”, the second company on a TripAdvisor ranking (even here you can bargain and drive the price down a bit, especially if you are with a group of few friends). Already next day we were driving in a jeep to face our fears and get a taste of this adventure sport for the first time in our lives. I was the one more excited about this idea but it turned out Sebastian was the one who enjoyed it more :p I was horribly stressed in the air by not having any control above the situation and on the top of that I felt motion sickness :( uhh… I discovered it is not activity for me but Sebastian enjoyed it a lot, especially acrobatic maneuvers at the end which I skipped for the obvious reasons. The flight was around 20-30min with the beautiful view of the lake and the whole Pokhara city. Unfortunately, the snow-capped peaks were not so clearly visible that day. Overall, it was an unforgettable experience to see the earth from another perspective :D 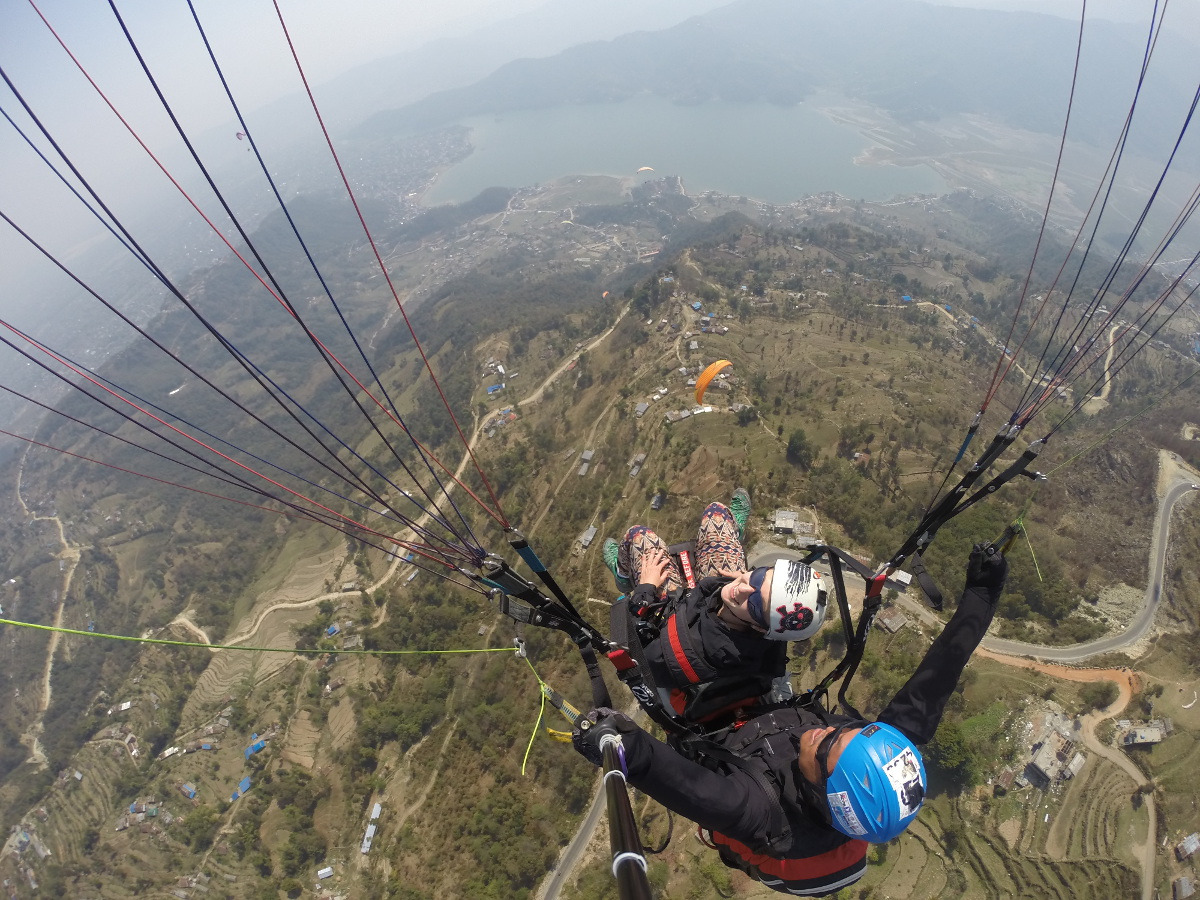 To relax after exciting morning, we decided to visit a Tal Barahi Temple situated on a tiny island which could be easily reached by a shared boat. This place did not make a big impression on us but it is an important pagoda for Hindu people, dedicated to the worship of a Barahi goddess. 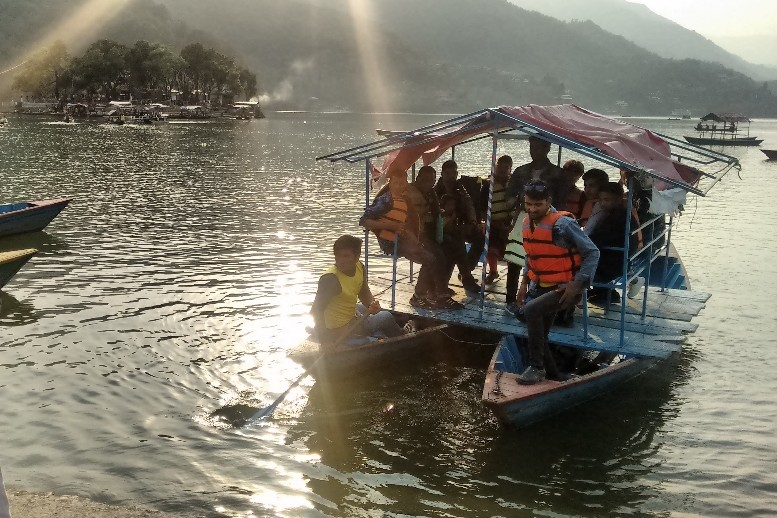 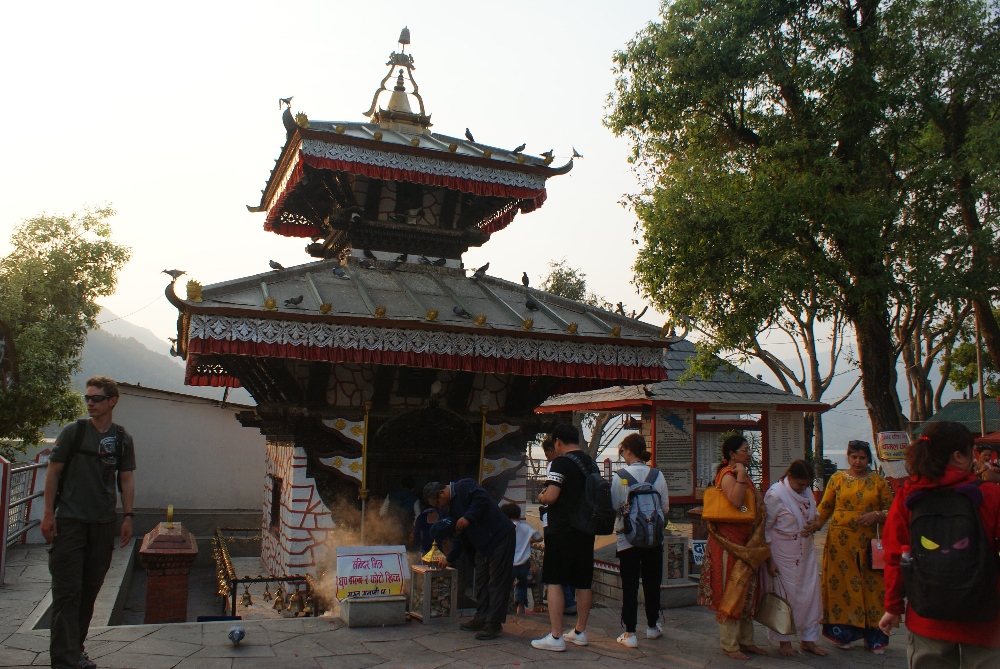 Believers waiting to give their offerings to the goddess. 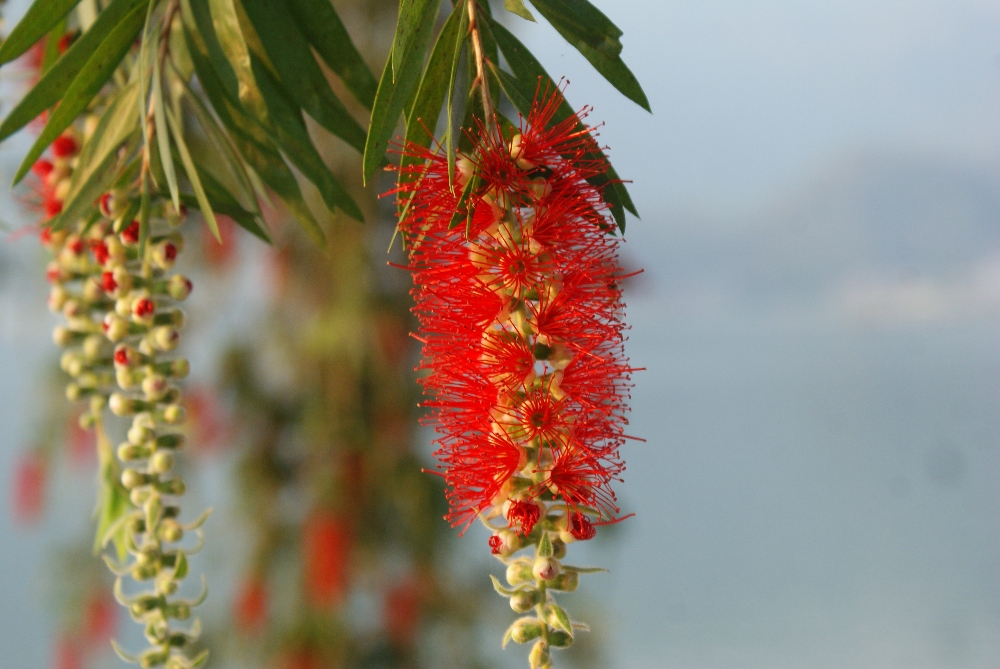 On our last day in Pokhara we rented two kayaks to spend some time on the lake paddling around the tiny island with hindu temple on it and exploring a lakeshore with lush vegetation. At one point we noticed a blue bird, similar to kingfisher but it wasn’t possible to take any photos of this beautiful bird. To explore the other side of the lake, we would need at least few hours more and we had something else in mind for after lunch :) 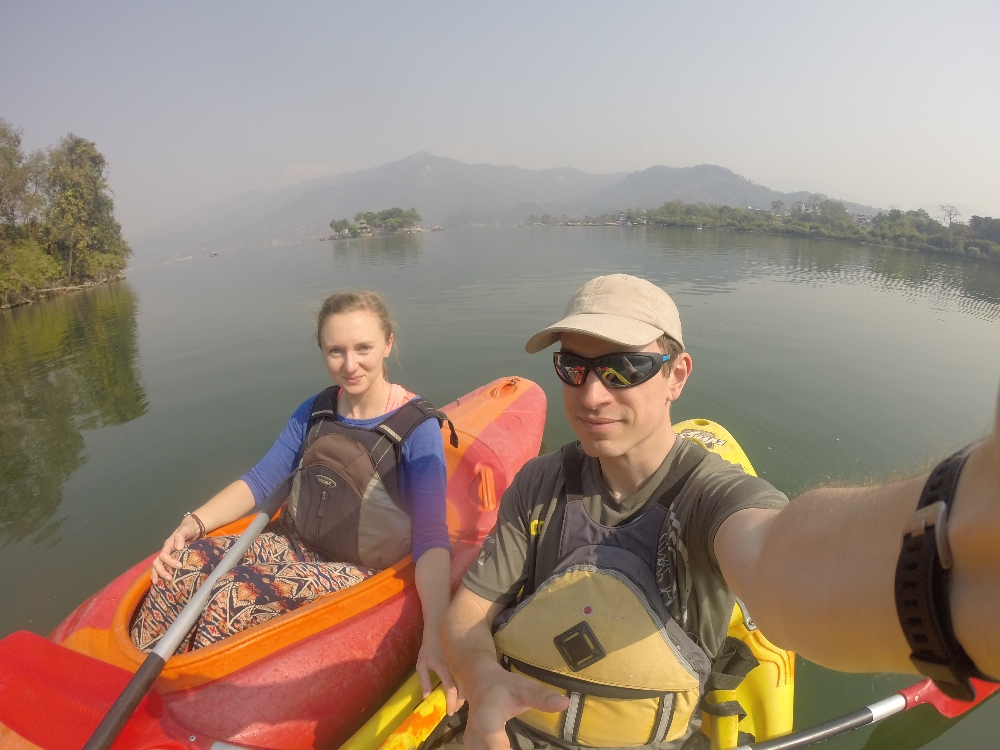 Our last destination in Pokhara was the World Peace Pagoda, located on a small hill next to the lake. Actually it turned out to be a pretty demanding walk up there, almost 7km with a steep part in the forest at the end (300m of elevation gain). We could admire the view of Pokhara but not a panoramic view of Annapurna range which is only visible during good weather conditions. We decided to wait in one of the small cafes nearby and admire the sunset from the top of the hill. White pagoda looked remarkable during a sunset. We decided to walk down through the outskirts of the city to the main road since the taxi drivers close to the temple were demanding an exorbitant amount of money for a ride back. 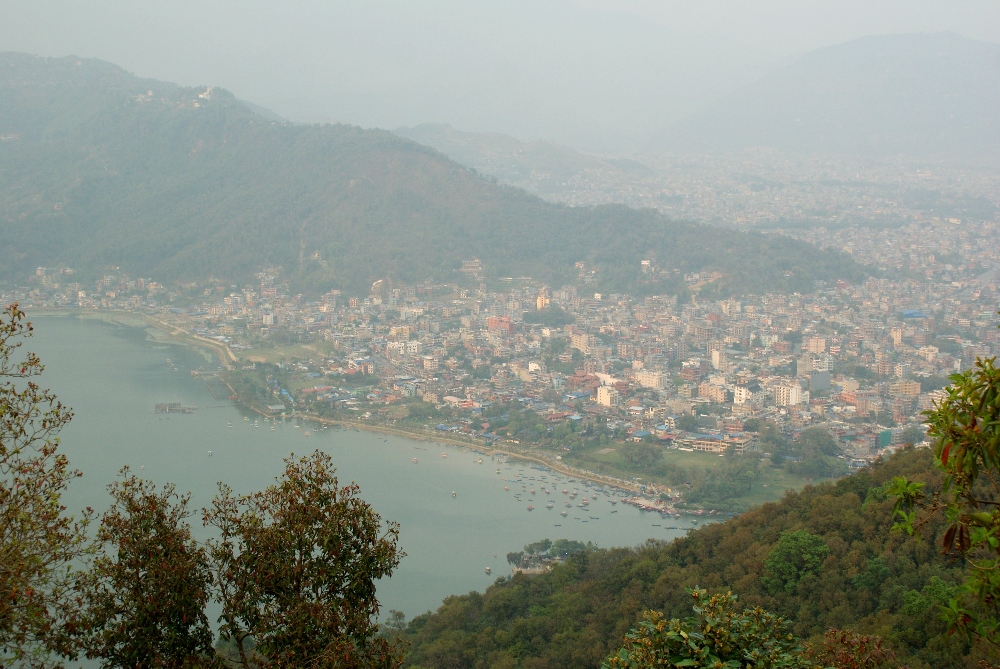 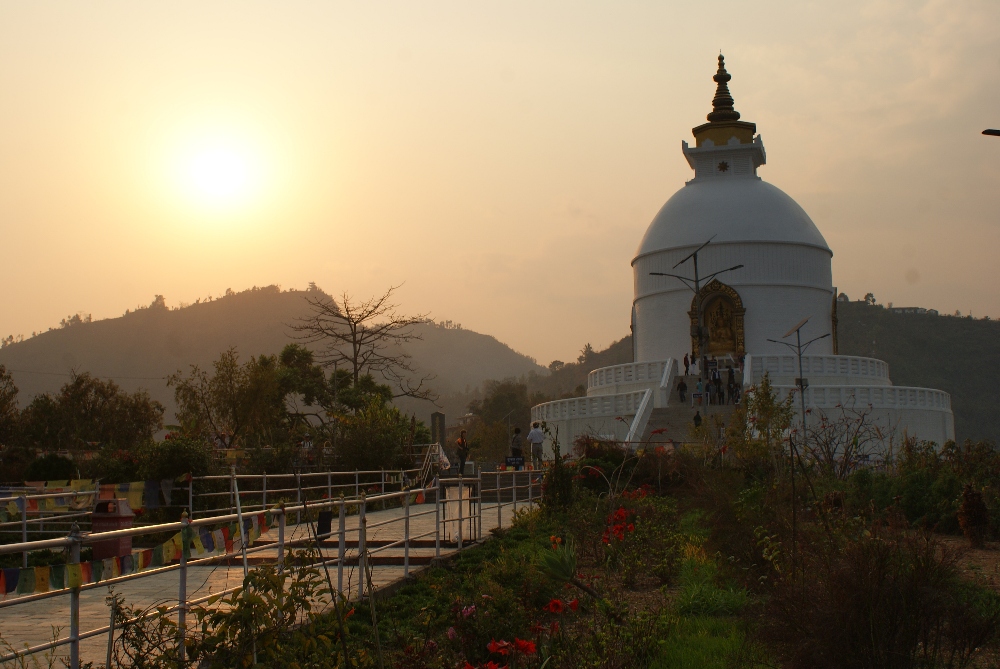 Oh, it was a sad moment when we had to leave Pokhara, our favourite juice bar (Wendy Juice Shop) with amazing orange lassi and a sandwich bar on the same street. This city has good vibes and we could stay there even longer.

After a bumpy, 8-hour long drive we reached Kathmandu. A busy, dusty and chaotic city. The Thamel district was again our choice for the last two nights. This area of the city is great for shopping and has many options for a nice dinner. For the next day, the plan was to visit few famous places in the city by taxi (it is quite difficult to walk around without being hit by a random car or a motorbike). Remember that taxi drivers always ask higher prices which can be haggled down. You can easily start negotiations by offering half what they want and finally meet somewhere in the middle. There are way more taxi drivers than customers so the competition is really high.

The first place we visited was Swayambhunath temple, also called the Monkey Temple, because of the large number of these animals around the place. Don’t be misled, they are not as friendly as you think :p The taxi driver dropped us at the main entrance where the steep stairs lead to the top of the hill. Along the way to the temple, many small stalls offer cheap souvenirs and snacks. 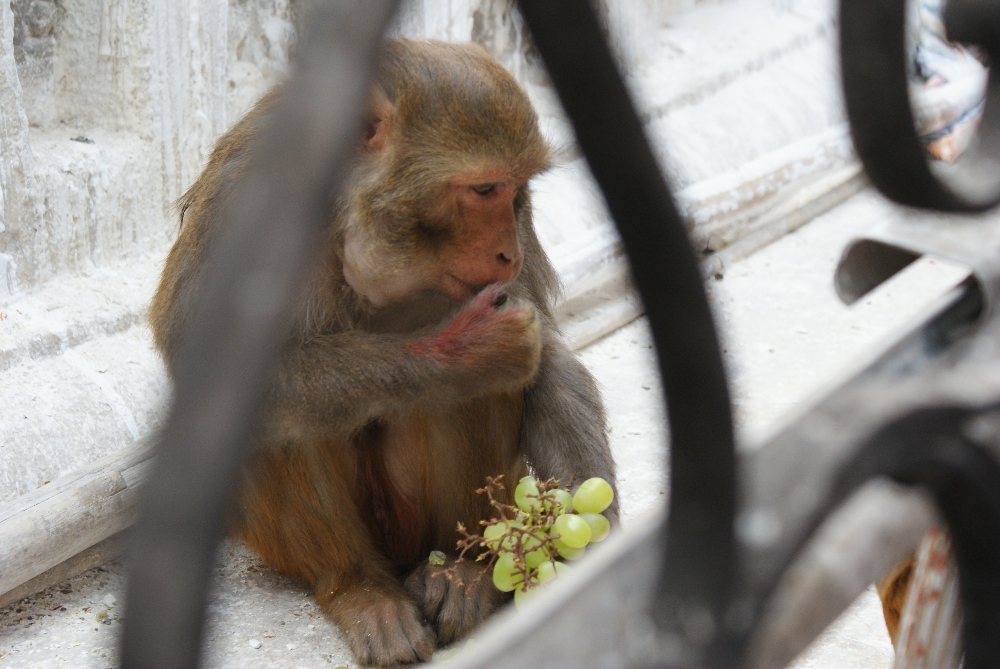 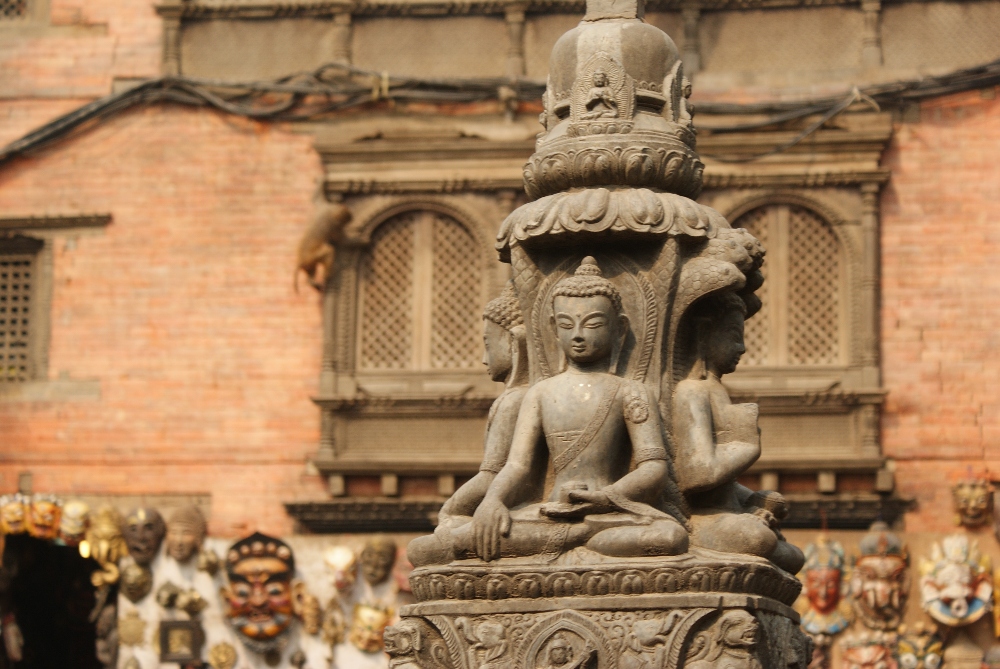 On the top of the hill, besides the main temple there are many smaller once and workshops selling handmade items. In one of them we bought a stone with carved mantra, Om Mani Padme Hum (phrase repeated during meditation) and mandala showing 8 symbols of happiness. In the middle of the stone are Buddha Eyes (also known as Wisdom Eyes) meaning powers of Lord Buddha to see all people. 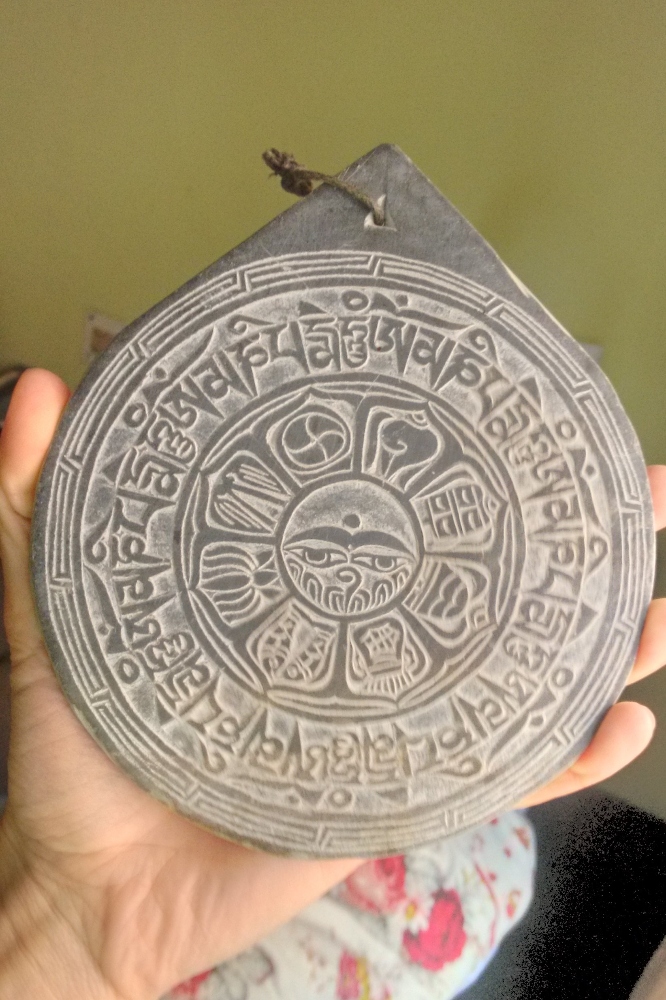 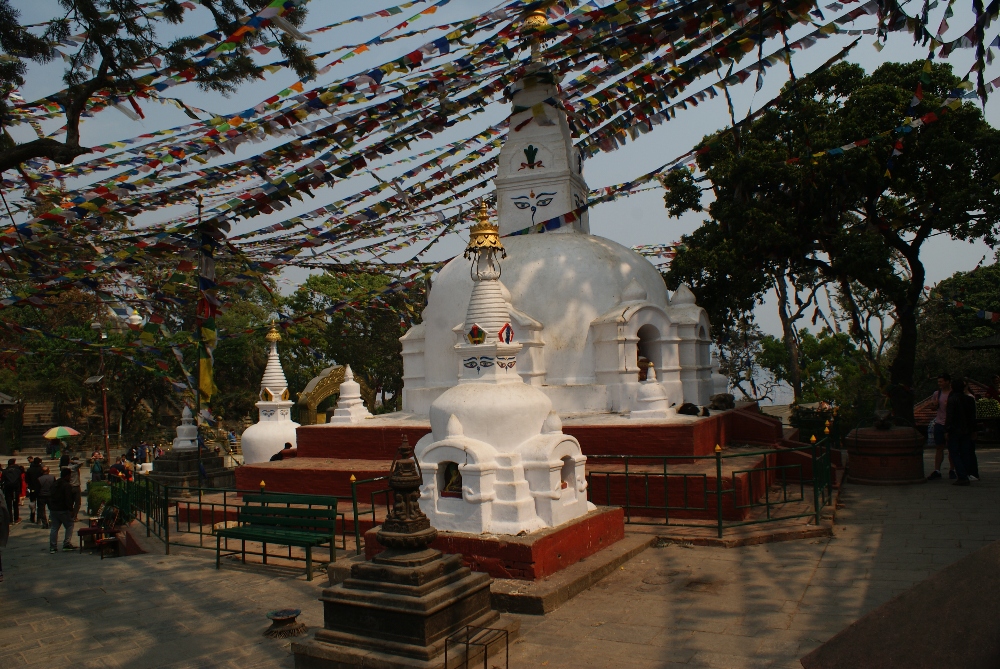 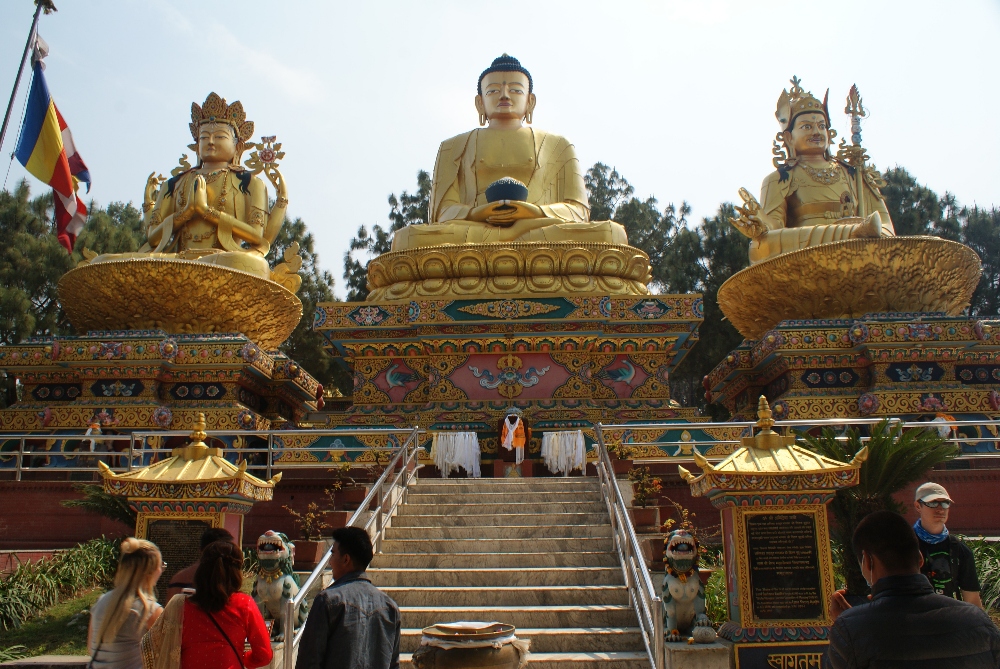 Time for the next place! Patan Durbar Square, the oldest part of the city from XVII was really destroyed by the earthquake (7.8-magnitude) from 2015. This world heritage site in the Lalitpur district where most of the buildings are in scaffold still attracts many tourists (the entrance fee is 10$ what is a lot compare to other places where the fee is usually 2$). We also wandered around Patan on very narrow streets, full of home workshops selling Buddhist metal or bronze statues and sculptures creating great opportunity for art lovers. 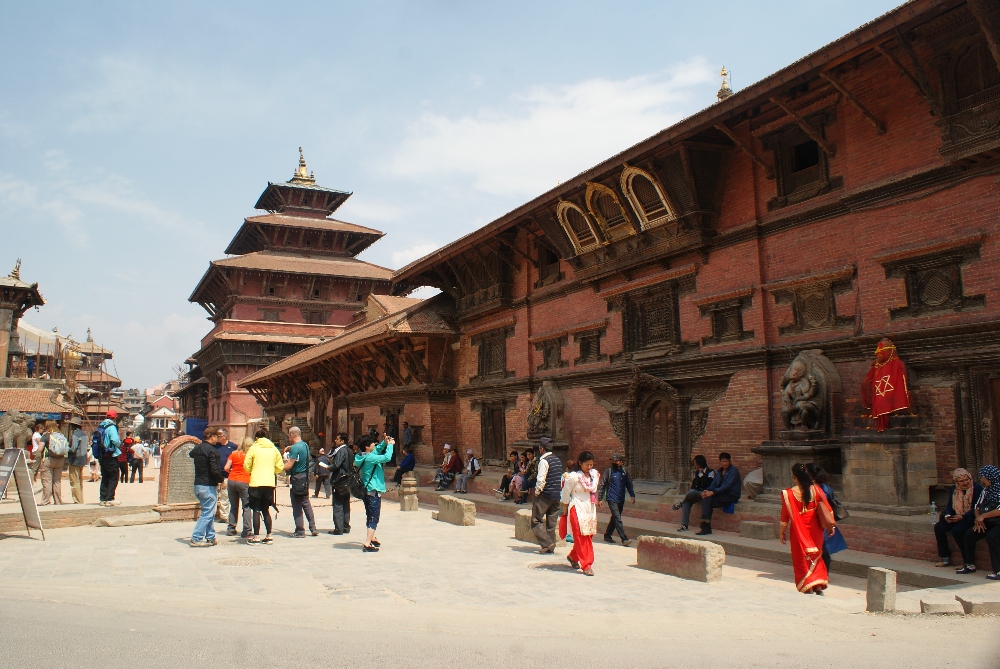 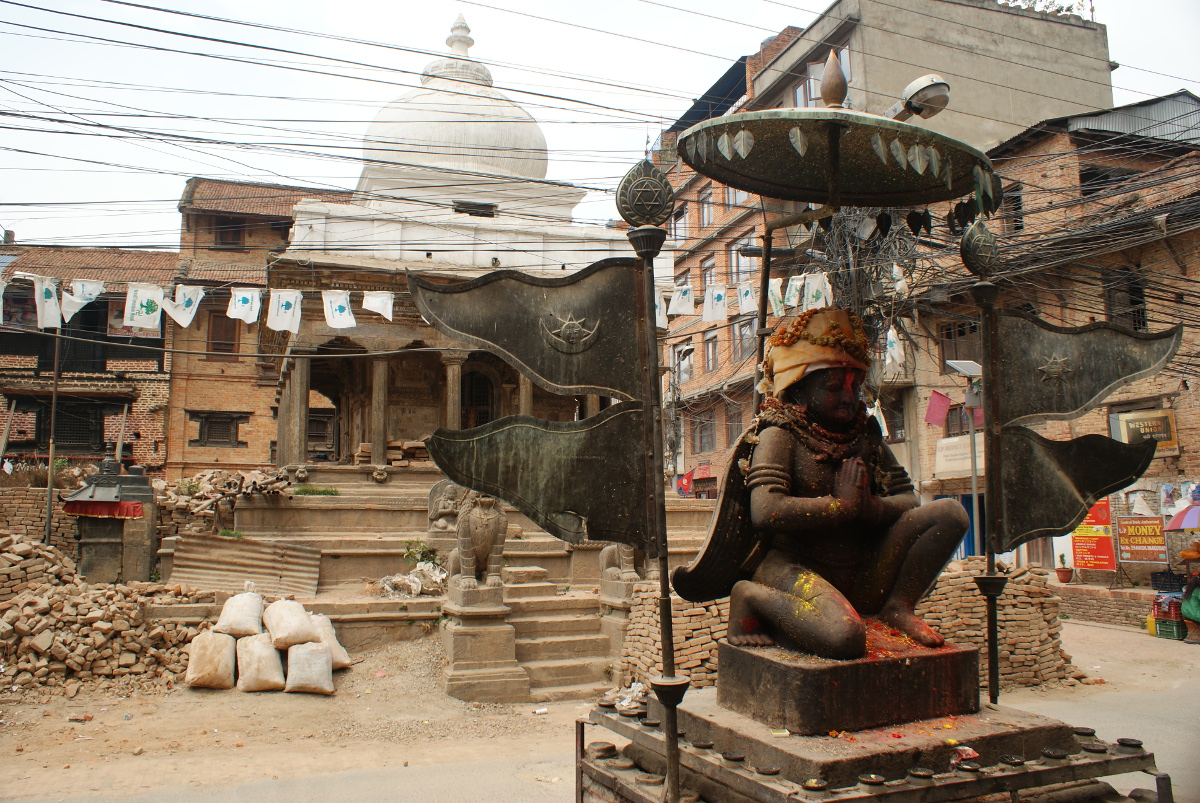 Our taxi driver recommended us the only quiet place in the city to relax, Garden of Dreams :p Haha, he was absolutely right! This peaceful oasis is a great place to rest from the hustle and bustle of the city. Flowers, fountaine and friendly squirrels this place really unique. There is also a Kaiser Café, serving food and drinks. 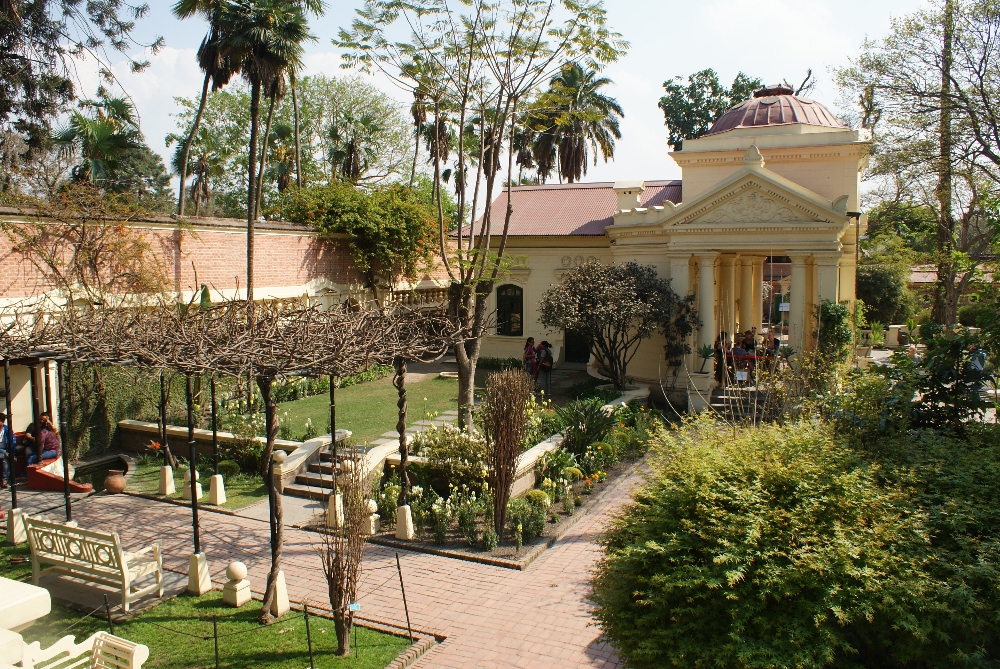 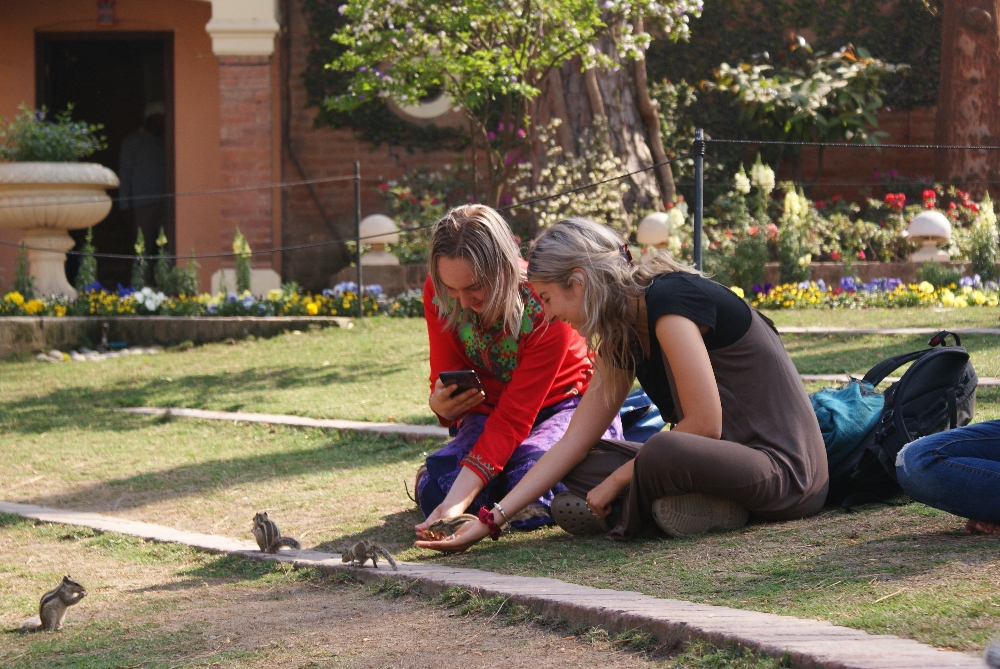 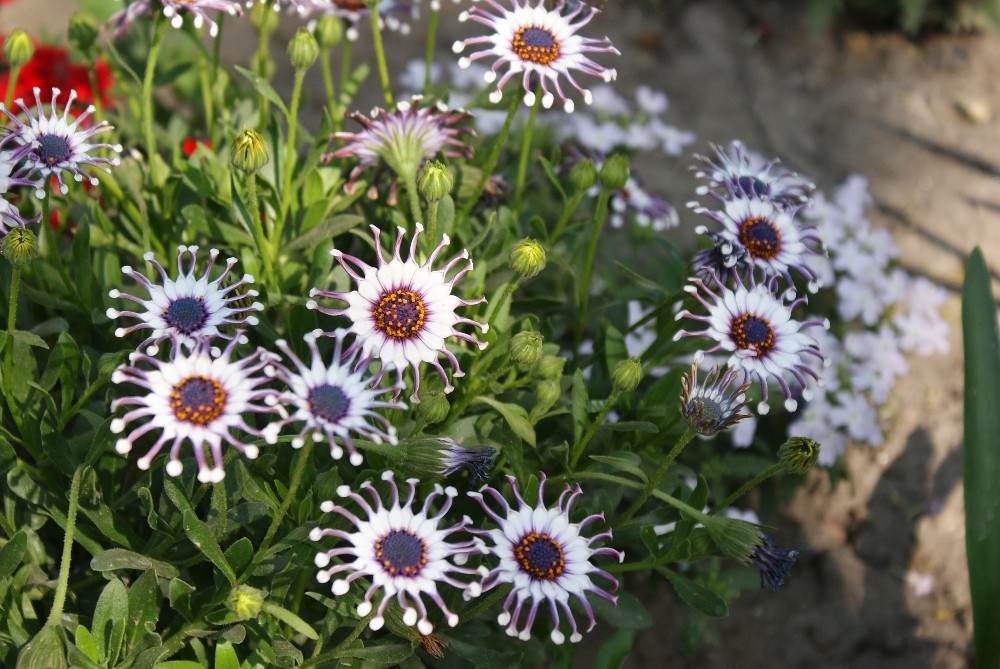 Finally, it was time to catch our flight to Bangkok. Nepal’s Kathmandu airport was the place of a plane crash while we were hiking on Annapurna Circuit :( The plane approached the airport from the wrong direction, crashed and burst into flames, killing most of the passengers and crew. It is easy for me to imagine that more people could have survived if the rescue operation was more efficient. This airport was chaotic, check in carried out by 4 people took forever, their computer stopped working and there was a problem how to label our luggage (haha, that was something we never encountered). Luckily, our backpacks arrived in Bangkok safe and sound :D

Share:
Previous: Practical information: Annapurna Circuit Next: How we ended up in...